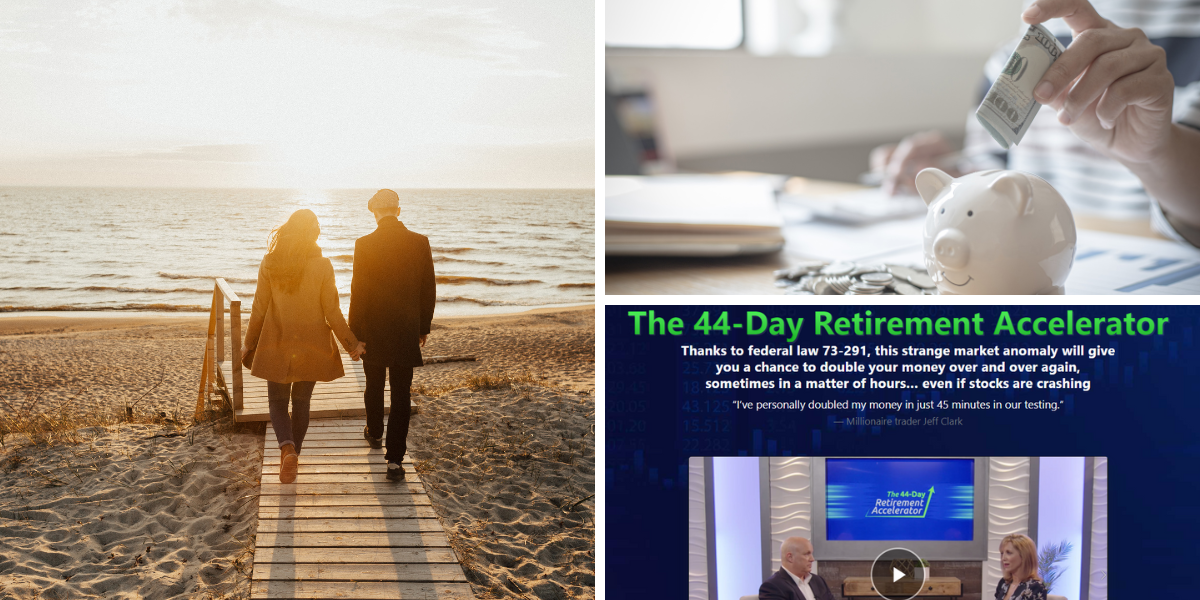 At or near retirement? Then you’ll want to pay close attention.

Jeff Clark says a strange market phenomenon has created opportunities to make 321%, 409% and 500% in a matter of hours and its guaranteed by Federal Law 73-291. This is only possible because of a new “44-Day Retirement Accelerator” that begins today.

Could it be true, could you double your money every day for the next 44 days, regardless of what’s happening in the market?

Jeff Clark is known for one thing – options trading. He began writing newsletters after retiring from his independent, brokerage house and private money management firm at the age 42 and he’s been at it ever since. We have covered his “One Stock Retirement” Strategy and “5 Minute Money Multiplier” presentations.

If you’re familiar with Jeff’s previous work, then you know off the wall claims are par for the course. If you’re not, then things will sound a bit crazy at times. Either way, we’re about to discover a strange phenomenon that he says happens every year around this time.

So, what is this “phenomenon”? Well, Jeff says the government is actually behind it.

Its set in stone thanks to section 13 of Public Law 73-291. This is actually the Securities Exchange Act of 1934, which governs the secondary trading of securities in America. The reality that this federal law affects about 4,000 stocks is correct – it affects all stocks and securities.

If there’s one thing on Wall Street that causes stocks to move up or down more than anything else, its when companies release surprising news for the first time. This is where this law comes in, as it requires all public companies to release this type of news before certain deadlines.

The SEC, which enforces this federal law makes sure companies make adequate disclosures in a timely manner to promote transparency in the public market, yada, yada.

Each company has their own deadline. So these dates are all over the place, all throughout the entire year. But there are periods when you get a cluster of opportunities, all packed in a 44-day period and that actually happens a few times every year.

This and the patterns that occur after companies release their information is what Jeff takes advantage of and he’s giving away the names and ticker symbols of three companies he’s targeting next.

Jeff has launched a brand-new research service that’s focused only on these types of opportunities called Jeff Clark’s Earnings Trader.

If we sign up to become charter members for $2,500, we’ll receive an email with our very first opportunity to double your money. We will also get at least one new trading recommendation every week, an 8-part video masterclass on options trading, purportedly showing us how to make money regardless of what the market is doing, buy and sell alerts, and more.

What in the World is the 44 Day Retirement Accelerator?

Jeff’s strategy is all about earnings and the opportunity to double your money over and over again around earnings announcements.

Technically, there’s 4 earnings seasons a year (one each quarter). But the reality is that we have so many public companies, nearly 4,000 on US exchanges and they all have their own fiscal year, their own deadline to report results. So what ends up happening is that we have announcements all throughout the year, not just during the traditional earnings season.

Jeff tells that he’s been back testing this strategy with his own money, so he’s already done all the for us work and built a proprietary calendar of companies and their upcoming earnings dates. It looks something like this:

This is what really makes this the most predictable trading strategy Jeff’s seen in his 38-year career. How predictable?

In total, during Jeff’s beta test, he performed 20 trades and out of those 20 trades, 19 were winners. For an unheard of 95% win rate so far. Its called the 44 day retirement accelerator because you get in on the right date, a date you know ahead of time, get out no more than 44 days later, so you don’t leave your money exposed to long-term risk and accelerate your retirement.

But there’s more to this than just knowing when a company is about to report earnings, much more. One critical thing must happen after the company releases that information. It’s a pattern that’s so reliable that the late John Bogle, who founded the Vanguard Group even called it a “stock market law of gravity.”

Jeff merely uses these deadlines from the SEC to narrow down the opportunity to only stocks that could release surprising news. If the pattern appears, the light turns green and that tells him those stocks hold the potential to double the money put into the trade.

This is what happened back on January 26 of this year. Plenty of companies reported earnings that day, but only two had the potential to double your money – NextEra Energy Inc. (NYSE: NEE) and General Electric Co. (NYSE: GE) based on Jeff’s proprietary pattern. What ended up happening was not one, but both of these posted triple-digit gains in a matter of just days instead of months or years.

As for the names and ticker symbols of three stocks from the proprietary earnings calendar…well Jeff makes no further mention of them anywhere in his presentation. Leaving plenty of room to take a deeper dive into the “retirement accelerator” strategy itself, as there’s several components to dissect.

More than 90% of all retail traders lose money.

This is the harsh reality we have to come to terms with in a market dominated by large institutional algorithm-based traders.

Today, up to 75% of all trading volume in the U.S., European, and major Asian financial markets is generated through algorithmic trading. This pits us (humans) at a huge disadvantage, at least when it comes to taking money out of the market over the short-term.

Is the pattern-based trading strategy that Jeff touts here likely to change this – in a single word: No. See, the more widespread a trading strategy becomes, the less effective it gradually becomes. So, while Jeff may have had a 95% success rate in the past during his limited back test. This will surely dwindle as his strategy becomes available to virtually anyone. For these reasons, I would stay away.

Do successful, manual, short-term trading strategies still exist? Let us know in the comment section below.