Jeff Clark’s “One Stock Retirement” Strategy – Make 390% In As Little As 8 Days? 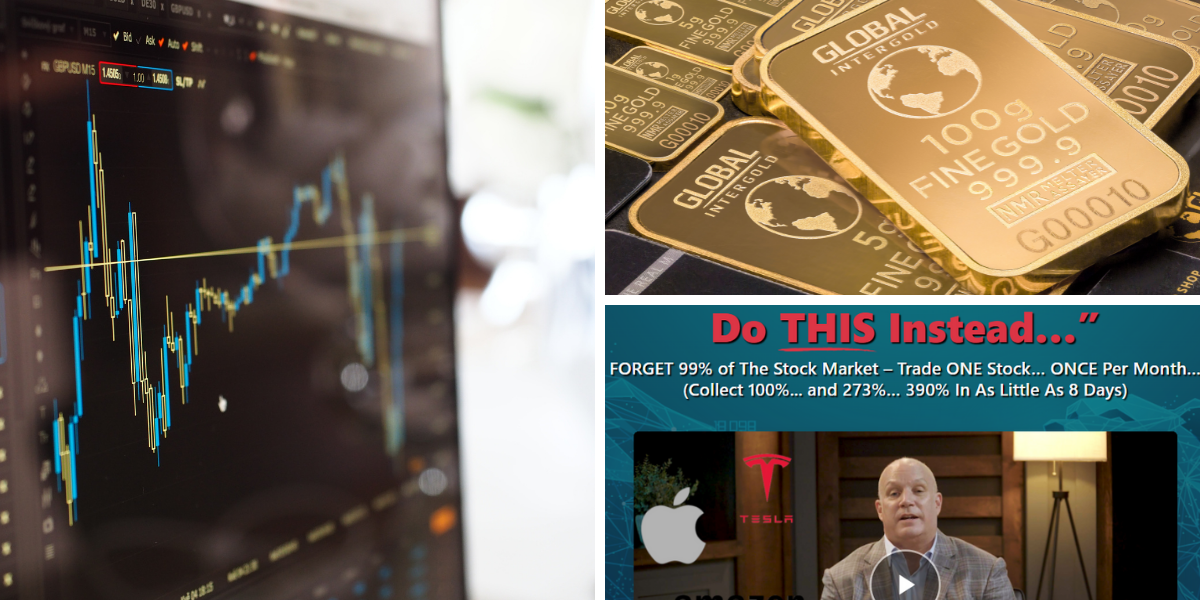 Jeff Clark brags that he’s joined the ranks of the top 1% of wealthy Americans, by ignoring 99% of the entire stock market.

Within the 6,000 different stocks on the market to choose from, there exists a very special stock and he calls it “The One Stock Retirement”, as it makes for “The Perfect Trade”. Let’s find out more about Clark’s contrarian strategy.

This strategy breaks almost every rule in the trading handbook while delivering gains of 210%, 353%, 385%, and more – all by trading one single stock. Jeff Clark is the editor of the several investment advisories which focus on trading profiting in any market environment. He began writing newsletters after retiring from his independent, San Francisco-based brokerage house and private money management firm at the age 42. We have reviewed several of Jeff’s presentations here in the past, including his “5 Minute Money Multiplier” and America’s Boldest Financial Experiment.

If you’ve ever wanted to make more money in a single trade than what most people collect in DECADES in the markets and do it over and over again, Jeff says this will be the biggest discovery of your life.

To some, the whole idea of retiring by trading a single stock sounds crazy. Especially since most of us have been told to do one thing, over and over again: Build a balanced portfolio and hope for the best. But who’s gotten wealthy from doing this?

This is one reason you very likely won’t hear about the “One Stock Retirement” secret from CNBC, Yahoo Finance, CNN, or anywhere else. It is also why nearly 41% of the entire country says they don’t have enough money to retire. So today, Jeff is going to give us the name of his “One Stock”, a real demonstration of it in action, and also walk us through his entire trading strategy. Let’s start with the real-life demonstration.

This actually happened during one of history’s worst market crashes, a single day when the Dow Jones Index plummeted 1,191 points – “a week in which $3 trillion worth of wealth was wiped out” by some accounts. But instead of getting caught in this $3 trillion wipeout, Jeff used the “One Stock Retirement” strategy to recommend a simple trade that had the chance to collect a 373% gain in just 8 days! At this point, you are probably ready to learn more about what’s behind the trading strategy? What is The “One Stock Retirement” Strategy?

This is what Jeff is claiming the “One Stock Retirement” strategy pulls off and without the added complexity of having to keep up with a small universe of exotic instruments and hundreds of different stocks. He even goes so far as to say that the #1 financial myth of all time is: “building a highly diversified portfolio”. Adding that, if you had $10,000 to invest into the stock market and grabbed the average 10% annual return, it would take around 8 years for you to double your money.

This strategy enables us to be in and out in as little as 8 days. One stock, once per month, over and over again. The best part is that anyone with as little as $100 can get started and have a shot to multiply their investment 2-times, 3-times, even 4-times over. The “One Stock Retirement” strategy is extremely powerful.

So how exactly does this strategy work step-by-step? Jeff explains that all we have to do is take our phone, input the ticker symbol of “the one stock”, the quantity we wish to buy, and boom, we’re all done! He insists it really is this simple and there is no more spending hours glued to a computer screen, no more trying to snatch up gains after the talking heads on T.V. covered the play, and no more waiting years just to get a decent profit.

Guess the only thing left to find out is the name and ticker of this stock.

Revealing “The One Stock” Behind The Retirement Strategy

Jeff comes out and reveals that “The One Stock” is actually an ETF – VanEck Vectors Gold Miners ETF (NYSE: GDX).

GDX tracks an explosive grouping of gold stocks, trades a large volume everyday, and it’s what Clark consider to be the world’s most predictable stock. Whether the market’s up, sideways, or on the decline, we can leverage the power of GDX for an opportunity to extract massive profits out of the market.

As an examples of this, in January of 2021 when the Dow dropped more than 600 points and the S&P 500 went red for the year. Jeff recommended one simple trade on GDX as millions of Americans’ portfolios turned red and snapped up a 75% gain amidst this chaos. Then when the market was pounding back to life, Jeff recommended another simple trade on GDX. Sure enough, those that heeded this recommendation saw a 107% gain in just 7 days.

It all comes down to what The Economist calls, “the world’s most valuable resource”. This reason is: Data.

Since GDX closely follows the price of real physical gold, there are literally centuries of data to pull from to accurately predict the direction GDX could move in any market condition. It’s like how a supercomputer might extract data at a rate of 200 quadrillion per second, taking in countless different sets of information to release one predictable outcome. “The One Stock Retirement” system is very similar.

Jeff sums things up by saying that the “One Stock Retirement” trades usually take around 2-minutes or less every single time and there’s no more being a slave to your computer screen or having to spend thousands of dollars on an investment that might take years to reap any kind of reward.

Based on what we were able to find, trading GDX Based On GLD inventory levels as a signal, is a common yet unique enough trading strategy. The conclusion we were able to draw from the public comments of some that employ such a trading strategy is that back test runs from the inception of GLD suggested that a simple algorithm resembling that outlined above warranted further investigation, as it DID demonstrate a better return than a long-term buy and hold strategy over a time period spanning both up and down markets.

Do short-term proprietary trading strategies still have a place in today’s market or have algorithms completely taken over trading? Let us know what your experience has been in the comment section below.