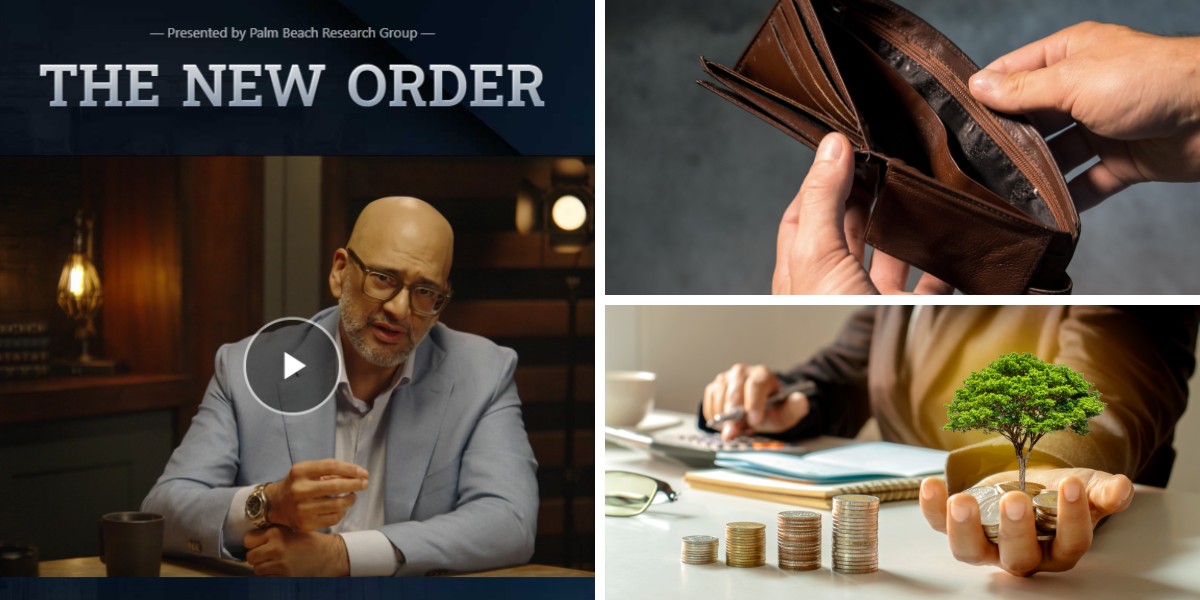 There’s a strange and sinister trend that’s driving inflation and crushing the standard of living of countless Americans.

But it doesn’t have to spell disaster, as there’s a way to fight back against this sinister trend with some of Teeka Tiwari’s “Maverick Investment” picks.

These picks side-step the tyranny of inflation, a corrupt media, and an administration hellbent on gaslighting the public over what is going on in America today.

Teeka Tiwari is the editor of Palm Beach Research Group’s flagship service The Palm Beach Letter and a host of other advisories. We’re no strangers to Teeka’s work here at Green Bull. We’ve covered his “Crash to Comeback” Crypto Royalty Picks and 3rd Trillion Dollar Trade presentation, among others.

It’s a class of inflation-crushing assets, which Teeka calls “Maverick Investments”, that will be revealed in this presentation.

But first things first, how did we get here and why do we even need inflation-fighting investments?

This chart sums it up well:

If we calculate inflation as the Fed did in 1980, inflation is currently over 17%. We all know inflation is bad, but this really puts it into perspective.

Of course, the million-dollar question is – will inflation persist? All signs point to an emphatic “yes.”

The Real Reason Behind Inflation

This was the year that the M1 money supply went from $4 trillion to over twenty trillion dollars virtually overnight. Put another way, 80% of all US dollars in existence were printed in the past two years.

It is the reason and catalyst behind inflation.

We could go a step beyond and call it “Modern Monetary Theory” or “Keynesian Economics”, which justifies money printing. Either way, understanding what happened and what is happening now is crucial for our ability to invest profitably. Especially with no signs of such hare-brained theories coming to an end anytime soon.

The truth puts us on the path toward “Maverick Investments” whose biggest gains are yet to come. So, what are these investments?

They’re named inside a trio of special reports, starting with The Maverick Collectible: My #1 High-End Collectible to Crush Inflation.

The other two reports are titled: The Maverick Commodity: 2,898% Demand Growth for the Resource Elon Musk Desires Most and The #1 Maverick Investment: The Inflation-Killer with 2,500% Upside Potential, respectively. They’re all “free” if we subscribe to The Palm Beach Letter at an annual cost of $199. Also included are 12 monthly issues of the newsletter, access to a model portfolio, and more.

Teeka says we are going to be surprised and possibly even shocked at the answers.

This is because these investments are outside the realm of your standard investment analyst. They’re alternative assets and three things define them:

The first Maverick Investment is an asset class that’s almost exclusively owned by rich people. In fact, it’s a big reason for the increase in the wealth gap over the last few decades.

The difference is even more pronounced in the third Maverick Investment. This asset would have made us more than a million dollars extra and more than 4Xed the market over the long term. We’re talking about talking cards:

Since the New Order of Money began, these assets have soared! The kicker is, the examples shown were indexes. We can do even better if we pick the right individual collectibles.

But what if we don’t have the money to buy a Picasso painting, a case of vintage French wine, or a Micky Mantle card?

The Other Maverick Investments

The next Maverick Investment we can use to beat inflation is another real good.

It makes a lot of sense since when you print lots of money, commodities naturally go up in price. Because there’s more money chasing the same amount of goods.

To Teeka, the best story in the world of commodities is related to the metals associated with EV cars and specifically, lithium. More on this a little later.

Teeka believes the growth of this asset will be unlike anything we’ve ever seen. It’s real, it’s rare, and it’s about to become so desirable that the entire globe will be clamoring to invest.

All this begs the question, what are the best investments to beat inflation right now?

The #1 high-end collectible to invest in right now

Based on the dearth of clues, we’d be taking a real stab into the dark here.

It could be one of the first three alternative asset classes Teeka mentions – contemporary art, wine, and trading cards. Or it could be something like music rights or something NFT-related. No way to really tell in the end.

The #1 play to take advantage of the lithium boom

This company has the following characteristics:

It wasn’t easy to figure this one out. But the company is likely Livent Corp. (NYSE: LTHM). The clues line up perfectly:

Similar to his alternative asset pick, Teeka unfortunately provides absolutely no clues about what this could be.

UPDATE: A reader of ours has commented below that Teeka’s 3 picks here are…

Looks like we were right with Livent (LTHM). For the other two picks, we didn’t have anything to go off of so we’re thankful for this invaluable information.

Teeka offers up some tangible picks that (so far) have appreciated by more than the official rate of inflation, however, we want to calculate it.

I would only venture to add gold, silver, and physical real estate to go alongside his collectibles and commodities picks.

As for Livent Corp. The company has real revenue, and profits, and it is growing its bottom line by about 50% per year. It also comes with a rather hefty 50x earnings valuation, so dollar-cost average down if you elect to buy shares.

Do you currently own any alternative investments? Let us know your favorite in the comment section below.