The United States is one of the biggest cannabis markets in the world, with over 94 million people admitting using marijuana at least once in their lives, according to official statistics. Along with legalizing the consumption of easy drugs in many states, the market for CBD has also increased significantly, leading to many new potential investment opportunities along with it. Teeka Tiwari’s Cannabis Stock Picks portends to provide such opportunities. 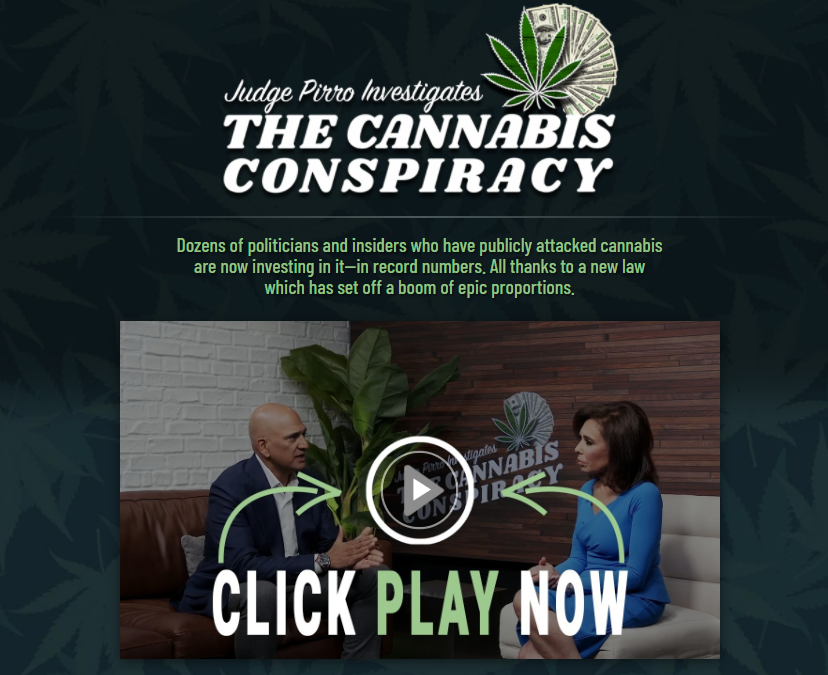 Out of all the Americans who use CBD, 49% of them say they take it for anxiety, while 42% use it to help them sleep better. But, what if you could sleep better at night, relax, and enjoy a big bank account at the same time?

Teeka Tiwari points out this new potential successful investment in his latest marketing newsletter called The Cannabis Conspiracy. According to the newsletter, there has been a huge shift in people’s opinion in the past few decades, with now as many as 89% of all American adults supporting full legalization of medicinal marijuana.

While the US state awarded $3 million to finance further medical marijuana research, even the FDA and the famous Harvard Medical School are praising the potential benefits of the plant.

In his latest newsletter, former hedge fund manager on Wall Street, Teeka Tiwari, sat down with Judge Jeanine Pirro to uncover the so-called “Cannabis Conspiracy” and show “what it could mean for you in the weeks ahead”.

Both Tiwari and Pirro tease about a new investment opportunity in cannabis and CBD stocks that will help you secure a better future, based on the success of previous shares of cannabis-related stocks that went up “from 944% to 9,775% and in a few rare cases, 16,621% or more“.

According to audit reports, Tiwari has “been able to help his followers see average annual gains of 89% over the past 8 years”, which is why you should take into his advice as he presents you the latest news in cannabis stock picks.

So, what are the so-called huge investment opportunities Teeka Tiwari promises? In a “special report” named “The Cannabis Black List: 16 Stocks to Stay Away From”, Tiwari claims to have put up a special list of “16 public pot companies” that investors should stay away from. You’ll get an additional report named “Cannabis Fortunes: 3 Stocks for the CBD Boom” if you subscribe to the Palm Beach Letter for a price of $49 per year.

Tiwari is a controversial character, describing himself as “one of the first investing experts to explore the cryptocurrencies”, as well as a financial pioneer. The former hedge fund manager made most of his money on Wall Street and has been actively investing in the stock market for almost four decades.

On the other hand, Jeanine Pirro is an American TV personality, host of “Justice with Judge Jeanine”, as well as author, prosecutor, and politician from New York. She is a close friend of current POTUS, Donald Trump, and was also a frequent contributor to NBC News.

She was elected as “the first female District Attorney of Westchester County”, according to Teeka Tiwari’s personal website for CBD investments. In the long interview, the two discuss the cannabis market and the reason why some of the biggest politicians, former advocates against legalizing marijuana have changed their opinion and done a complete 180, pledging in favor of it in the past couple of years.

The cannabis market is definitely growing (no pun intended) with legislation getting looser and an increasing nation-wide acceptance of the recreational consumption of marijuana. Such factors mean investing in this market segment could prove beneficial.

Some estimate the legal market for marijuana in the US to expand by over 18% annually and reach $74 billion by 2027. The verticals within the industry are growing as well. From producers manufacturing more and more CBD related products, distributors adding to their product lines, and retailers bringing these assorted options to consumers – marijuana gummy bears anyone?

There’s no doubt that the economy could use any boost that it gets right about now and emerging industries like cannabis which are growing, adding jobs, and making a positive economic impact have an added incentive to be allowed to grow from an illicit market into a mainstream industry all across the country.

You can make a lot of green in cannabis, but just like with any other investment it will take time to come to full fruition and the generated returns are seldom “millions of dollars” as often advertised in newsletters like Tiwari’s. Is this time around any different? We wouldn’t bet on it.

As with other cannabis exposes you’ll find here on this site like this one or this, we try to give our readers relevant information about each case, so they can determine for themselves whether or not the stocks being teased are worthy of their time.

So, let’s take a closer look at a few clues dropped in Teeka Tiwari’s Cannabis Stock Picks teaser to find out more information about what he is trying to promote.

From this we were able to find two companies that fit the above descriptions to a tee.

Tiwari says that more companies are looking to invest in what he called “the marijuana madness”, in what he believes to be “a corner of the market with 37x growth potential”.

With the information Teeka provided , we managed to identify two companies he is teasing – Isodiol International Inc., (CNSX: ISOL), and Tilray Inc., (NASDAQ: TLRY). The third company we weren’t able to clearly pinpoint, so we will save ourselves the embarrassment of taking a wild errand guess.

As we already covered, the cannabis market is ripe for growth in the decade ahead.  However, are Isodiol and Tilray respectively the past way to play this market?

A quick look shows us that both are currently unprofitable on an earnings and cash flow from operations basis, with Isodiol having a market cap of under $2 million as of this publication and a fair amount of debt on its books.

As for Tilray, the company is one of the larger publicly traded CBD companies on the market, but they are coming off one of their worst quarters in their history with its net loss more than doubling from a year ago.

As with many of Tiwari’s marketing programs, including the Palm Beach Newsletter – which is non-refundable. Do not expect much in the way of hard-hitting analysis, more like blue sky future future projections.

Are there better opportunities in the CBD market? Are you currently invested in any stocks in this space? What do you think is next for this market?