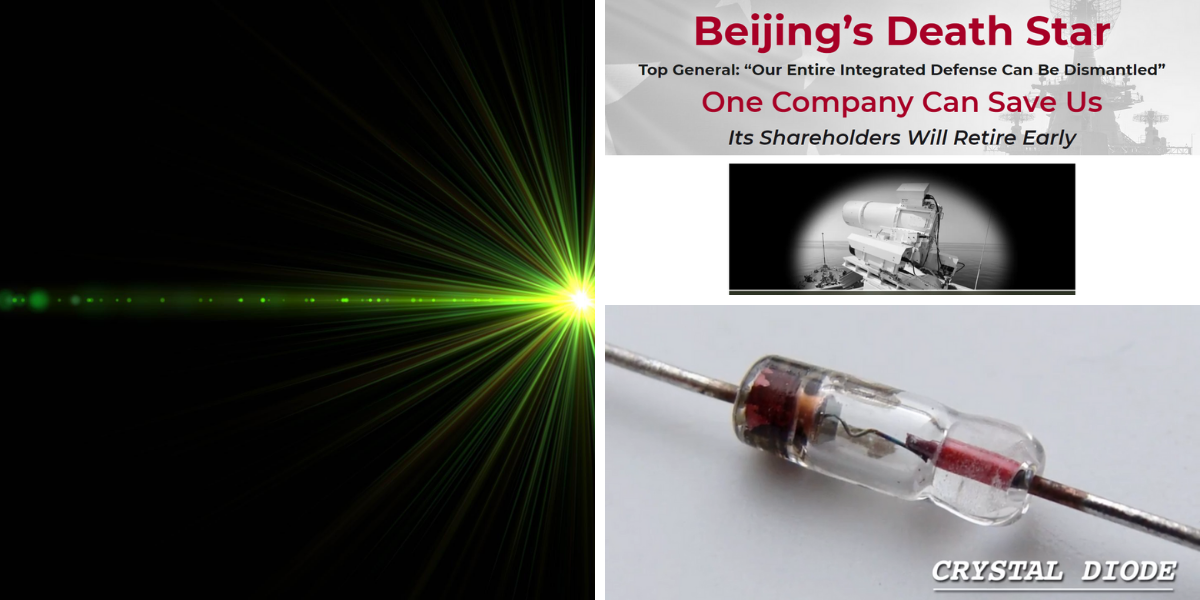 The Outsider Club's Jason Simpkins has been teasing an opportunity to invest in a laser defense firm that is supposedly going to help the US win the advanced laser weapons arms race with China.

He claims that investors in this company "will retire early" and that if you miss out you will surely be disappointed.

What is the company he's teasing?

Well, I'll be exposing it for you in a bit, but let's start out by going over the teaser and then piece together this puzzle of clues we were given.

The teaser presentation I found floating around the internet is titled "Beijing's Dealth Star", and it's all about tension between the US and China, something we're used to seeing here after already exposing the "Trade War Kickbacks" opportunity and Casey Research's defense supplier stock. 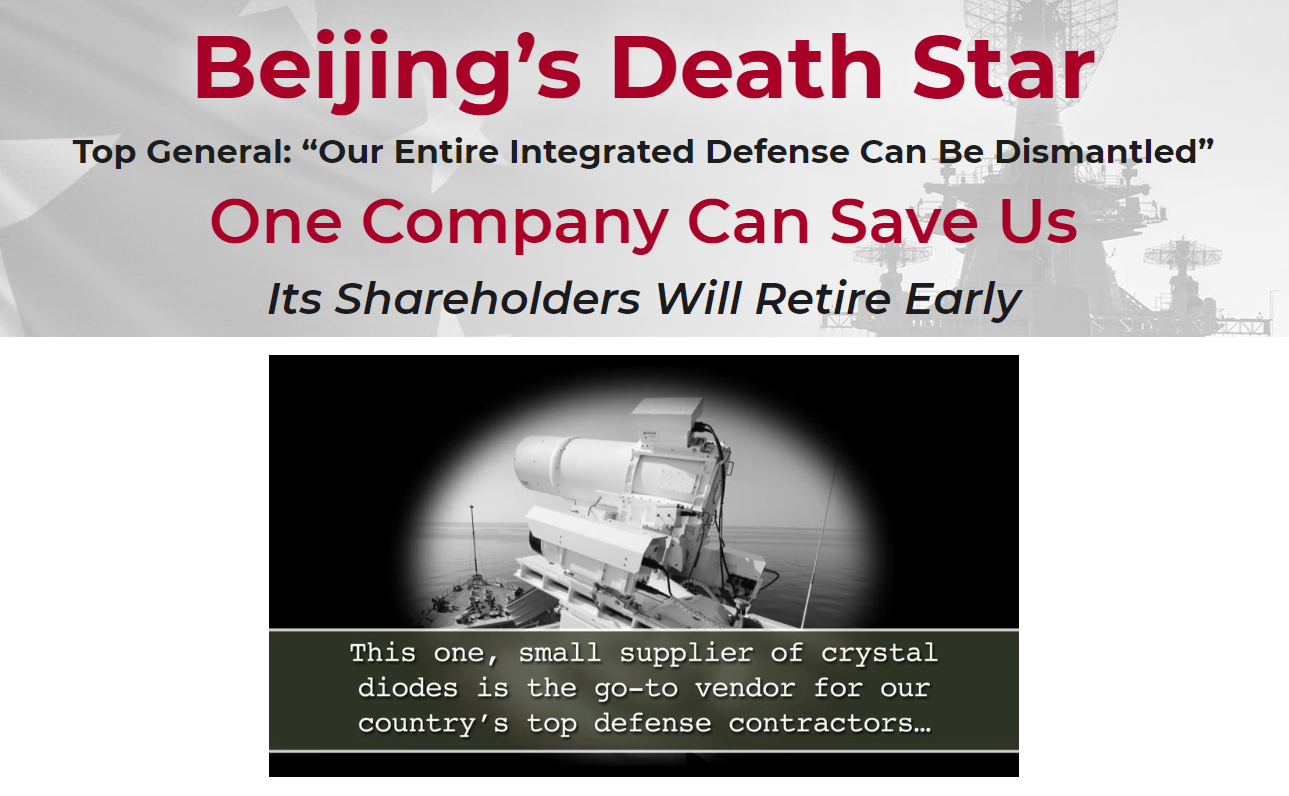 As mentioned, Jason Simpkins is the man behind it all. He has predicted bull markets in gold, palladium, oil, and many other resources that have brought investors nice gains... but tells us he's in the chaos business and likes nothing more than to find investment opportunities being catalyzed by geopolitical events, such as riots, wars, revolutions, etc. He has worked as a financial reporter and analyst for over 10 years and first began editing investment newsletter services at the age of 25, which is what he's still doing now for the Outsider Club.

In this teaser he talks about how China is building laser weapons that can potentially sink submarines, shoot down satellites, and wreak all sorts of havoc for the US military.

In fact, China has already been using low-power lasers to harass the US military and with a new development of higher-powered lasers, this problem could escalate a great deal. 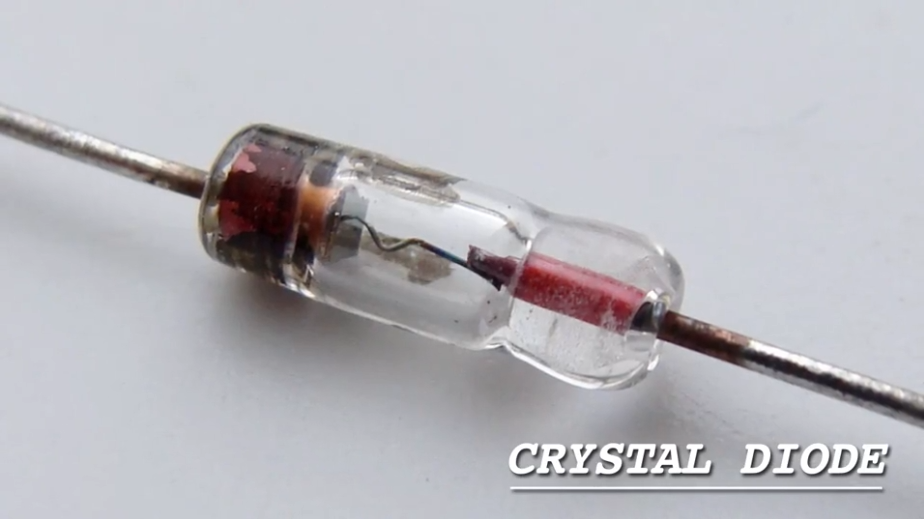 He strongly urges investors to take their stakes now, and claims that...

Yes... he did actually say that investors who get in right now will retire millionaires... without mentioning any amount of starting capital and keeping things as vague as possible of course.

The opportunity sounds incredible. A defense firm that could save the US from China taking over the planet? Sounds like a good movie plot... and it's very enticing... but don't forget about that sales pitch that comes at the end.

Simpkins is such a nice guy. He's offering viewers a "free" report titled The Laser Defense Firm That Will Let You Retire Early... 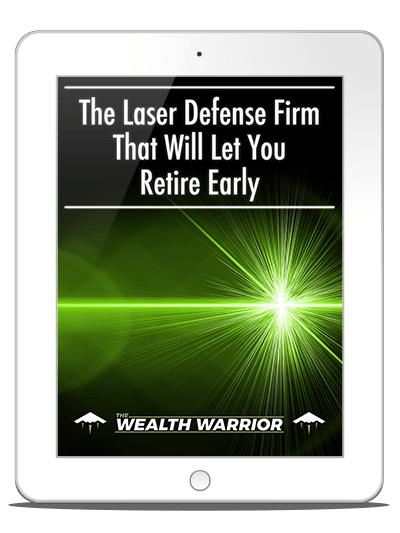 This "free" report provides all the details on the laser defense firm he's teasing... and all you have to do is buy into his investment newsletter service called The Wealth Warrior for $99/yr.

But wait a minute!... this isn't really free then, is it? What kind of trickery is this?

Well, this is just the typical sales funnel these days. A "free" report that forces you to buy into something first.

The good news: I'll be exposing the stock so you don't have to buy in just to find out.

Laser weapons have been in development in the US and China for years, but with the newly discovered caesium bismuth germanate (CBGO) crystals, low-energy beams can be converted into higher emissions, greatly increasing their potential for combat and defense.

According to some reports, such as that on SpaceNews, China's top priority is to simply damage US satellites' optical elements to disable high-resolution imagery. But maybe we should be saying that was their top priority, because with the new development the lasers have a lot more power, and more potential.

That's quite an improvement and the US, China, and other countries are racing to master this new technology.

It's an arms race, but luckily Simpkins claims there is one laser defense firm to save the day... and make investors rich at the same time.

Let's expose this company now, shall we?...

As always, there were small clues and hints dropped in the teaser and now what we have to do is piece these together.

Here's what we were given on the company: 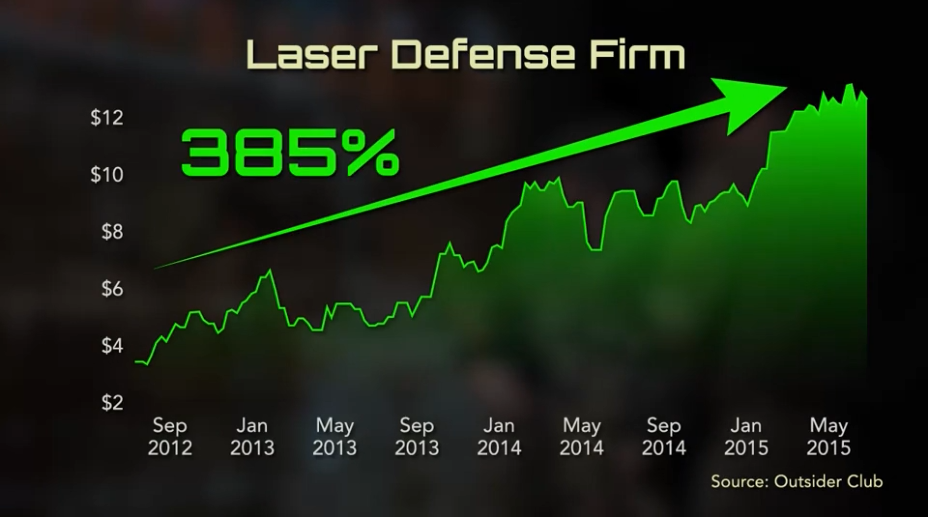 So what's the stock being teased here?

It's none other than Leonardo (FINMF OTC in the US), which, according to their website, is "the #1 diode supplier for military laser systems worldwide". Leonardo is a large conglomerate defense company and some of the hints given in the teaser refer to its smaller subsidiary companies.

The stock chart that was shown matches up perfectly with Leonardo's (FINMF)... just we were only shown a small section of the chart for some reason... 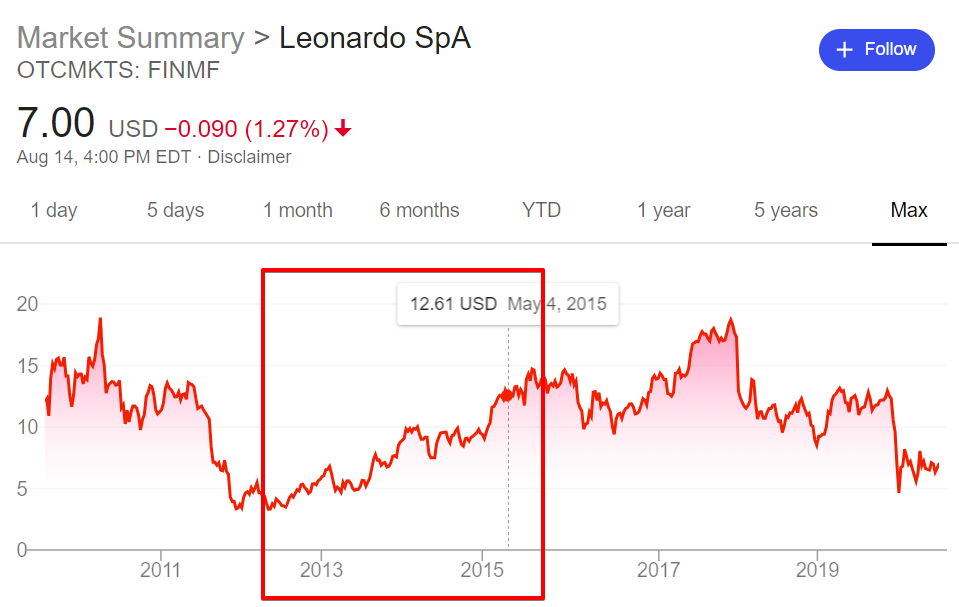 There were a few clues that didn't match up all that great, but this is normal with hyped-up and misleading teasers. For example, that $67 million contract that Simpkins mentioned is something I wasn't able to find tied directly to Leonardo. However, Northrop Grumman did get a contract for exactly this amount and since Leonardo works with them this could be what Simpkins is referring to.

All the clues here point to Leonardo here, but is this really an opportunity to retire a millionaire? Will you really get filthy rich like Simpkins claims?

The government is investing heavily in this firm, which does help to ensure the company is financially sound... so this is a good sign.

However, don't expect to get filthy rich. Leonardo is a conglomerate company and you'll have to buy a piece of everything rather than just being able to invest in their Leonardo Electronics US division or Lasertel, which is part of that division.

As a whole, Leonardo's main business is in the helicopters and aerospace area. This is one of the reasons their stock has taken such a big hit, with the massive disruption of civilian air travel as a result of COVID.

It could be undervalued and a good buy, but just don't count on the massive gains that Simpkins leads one to believe they will receive.

And it's also worth mentioning that Leonardo isn't the only supplier of laser weapons to the US military. There are others... although it is possible that the company is a critical supplier of certain components, such as the crystal diodes that are needed.

I hope this quick review has provided some value to you.

As always, let us know what you think of this stock pick down below? Will investing in this stock really allow you to retire early?