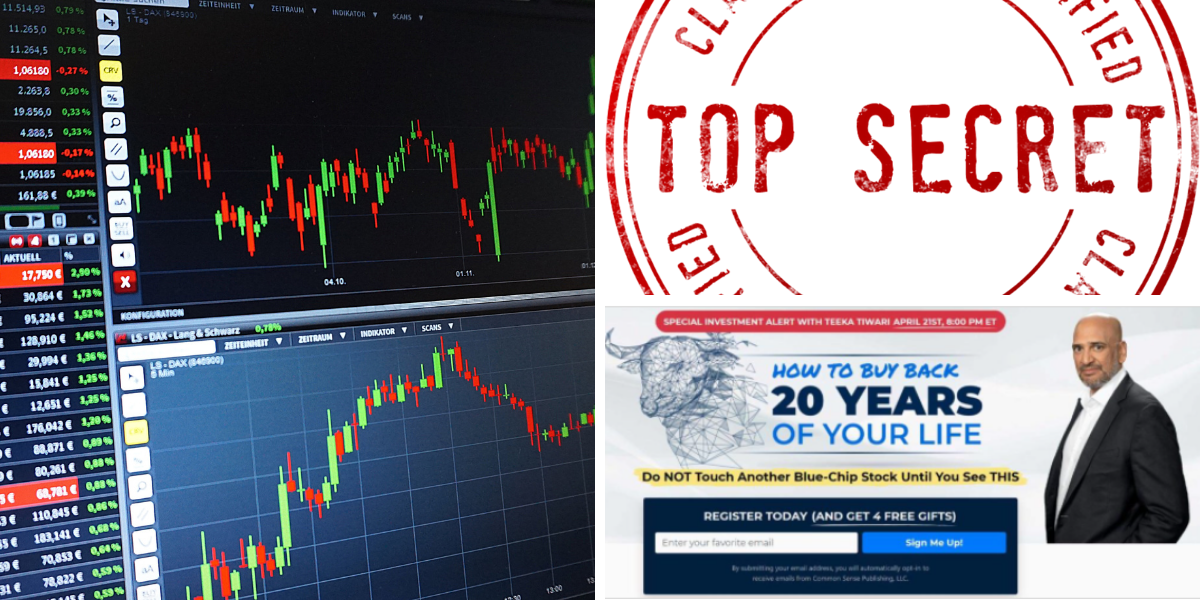 Former hedge fund manager Teeka Tiwari recently held a live stream webinar event on “How to Buy Back 20 Years of Your Life”, which is a very enticing title for obvious reasons, so kudos to his copywriting team!

The free virtual event was supposed to be reveal a full list of stocks to trade during something he calls the “Anomaly Window”.  However, the event turned more into a preview and sales call for his investment newsletter service, as well as a rant, in which he calls out Wall Street, Congress, and the rest of the establishment. Before stating that there is “one technology that is set to radically change our nation”. Lets find out what this is.

The livestream starts out like most Tiwari teasers, as it proclaims to favor the “little guy” by bringing opportunities to light which Wall Street has tried to deny ordinary investors for years.

Teeka Tiwari is a former hedge fund manager and Wall Street executive. He rose to notoriety by being one of the first “investing experts” to explore and recommend cryptocurrencies, such as Bitcoin and Ethereum in 2016. He’s since recommended more than four dozen cryptos, helping thousands of his readers turn tiny stakes into small fortunes.

One may think that Teeka is also talking about cryptos, SPACs or another similar trendy investment theme here, but that isn’t the case this time around. Instead, it centers around plain old common stocks and something called “Anomaly Windows”, which can open up at any given time and turn a handful of “boring” blue-chip stocks into exciting opportunities that can bring us gains of “1,500%, 3,000%, and 6,150%”, respectively. This is in line with some of Teeka’s other teasers which we have covered here: Tech Royalty Crypto Picks and Teeka Tiwari’s Cannabis Stock Picks Exposed! Which boasted about the potential for similar eye-popping returns.

Under normal market conditions, such gains would take decades to achieve. In fact, if we take the median annual S&P 500 index return of 10-11% from its inception in 1926 through 2018 (before valuations started getting really heady), it would take us 140 years to make 1,500%.

If you want to have a shot at getting rich before becoming fossilized, keep reading.

Teeka Tiwari’s “How To Buy Back 20 Years Of Your Life Summit” was pitch setup for his Alpha Edge investment newsletter. An annual subscription will run you a not-so-low price of $4,000, which is justified by claiming that you will have the chance to earn $1,200+ every month and that the “Alpha Edge Manifesto, will put you on the fast track to earning thousands of dollars in income every month”. 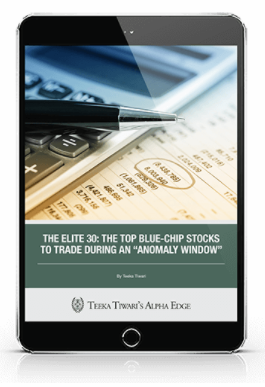 A full year of subscription to Alpha Edge would include periodic email updates plus access to all special reports, such as the aforementioned Alpha Edge Manifesto and Elite 30, which is a watch list of companies that are on Tiwari’s radar.

What in the World is an “Anomaly Window”?

An “Anomaly Window” is actually an event, that occurs “every few years” and closely mirrors the United States Presidential election cycle. In the past, such events have produced extraordinary gains:

This is all possible because as Tiwari has realized “investor sentiment moves in waves” which is nearly the equivalent of saying “stock prices fluctuate” but I digress. So what causes these market gyrations?

We are told it is due to investor sentiment, which of course ebbs and flows with every news headline scrolling past on a ticker tape. But apparently the “Anomaly Window” is not random and our host has discovered proof that it is in fact linked to a predictable date. It is inside this window that “the rules to wealth-building change” and “certain blue-chip stocks experience insane moves”.

He tells us that if we simply follow the script of past elections, such as in 1992 and again in 2016, a sector or even a handful of sectors are going to get slammed over one worry or another. This means “massive opportunities to profit from the volatility ahead”.

However, we are told that “we don’t have to know who’s going to win the next election…or what new policies will disrupt the markets in 2021 to profit”. But that this “window” usually only lasts just 28 days, thus conveniently increasing the urgency to subscribe to Teeka’s newsletter in order to get an “entire list of 3 elite stocks to trade during this window”.

If we take Teeka at his word and proceed according to what was revealed to us in the live webinar, he is hinting at a front running strategy of selling put options in a few mega-caps in order to possibly profit from future changes to their stock prices.

Unfortunately, there aren’t much of any hints dropped about the exact names of any of these stocks or what their publicly traded options ticker symbols could be. Thus, we are left to our own devices guesstimate about the true nature of the underlying trading strategy itself, rather than analyze any particular business.

If we are right, then Teeka Tiwari is hinting at a time-sensitive put option selling strategy. Which is one of Wall Street’s better kept secrets, as the beginning of the teaser even admits.

Fortunately, selling puts is one of the more conservative and lower-risk options strategies out there. Sometimes even more conservative than owning some large and mega-caps names outright (depending on the price you pay for them). This is due to the fact that close to 80% of options are not exercised, they are either closed prior to expiration or expire worthless, with only about 10% being exercised.

While not an all-encompassing strategy by any means, selling options can definitely compliment an investing operation and serve as an additional source of portfolio income. Just don’t expect to get rich off of it or make a 6,150% return in a matter of weeks or months.

Have you ever purchased or sold stock options before? What about employing a put-option selling strategy on stocks you would like to own? Tell us about your experience in the comment section below.