In his latest marketing newsletter, Frank Porter Stansberry talks about what he calls “The Big Lie” or all the reasons why the American economy doesn’t work and why one of the greatest economies in world history has been so deeply affected by the latest coronavirus outbreak.

He also pitches his investment newsletter: Stansberry’s Investment Advisory for a special price of only $79 per year. Included in the subscription you will get the digital book The Battle for America, 12 monthly issues of the newsletter, a digital copy of Buck Sexton’s New Book, and five bonus reports to help you get started with investing and putting your money in stocks that have the highest potential of profitable returns. For those who would rather invest that money elsewhere, here is what we were able to uncover for you for free. 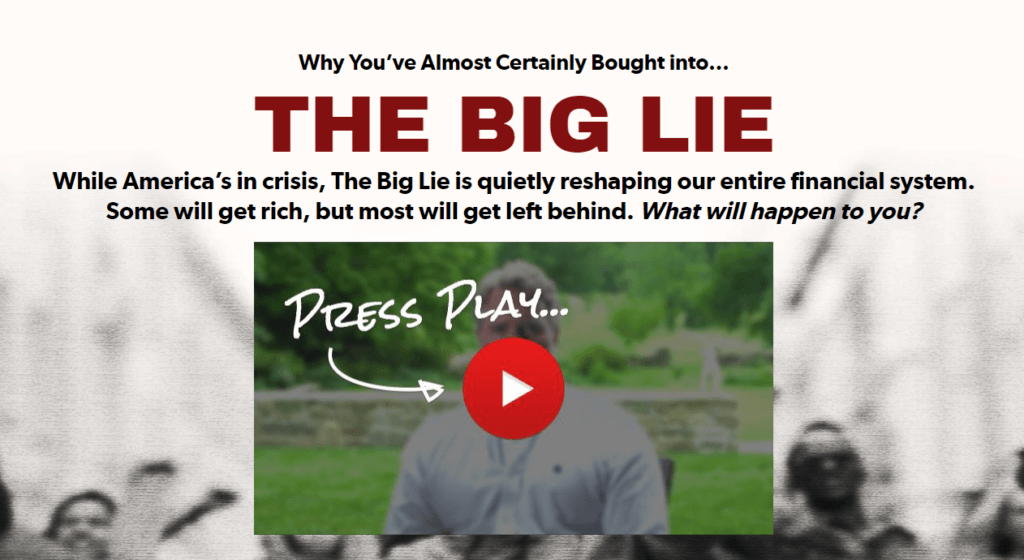 Porter Stansberry is a reputed financial publisher and author, as well as the founder of Stansberry Research, a private publishing company he started in 1999. His main fields of interest include commodities, the stock market, and real estate but, unlike other similar authors, comes from a solid background of theoretical economy, which helps him better understand the micro and macro sides of a potential investment.

Stansberry is also the infamous author behind the 2011 video, The End of America, in which he predicts the imminent collapse of the United States due to the unhealthy economic habits of the population and the central bank which enables it all.

As with many other similar newsletters, this one more so teases the newsletter subscription itself rather than any specific opportunity. However, Stansberry’s newsletter does actually have a solid reputation for providing economic research that explains complex financial and economic processes in plain English, so that they are accessible to more people, regardless of their financial expertise.

He starts off by saying “I’m sure you’ve noticed, our country has been a financial, cultural, and demographic pressure cooker for years. And now, the coronavirus has caused this pressure cooker to explode”. He goes on to say that “because of the steps our government has taken, things will not go back to normal. Ever!” He teases the next “big and inevitable event, which will determine your financial future, and how much you have for retirement” without giving away much information or getting too specific. A point we have heard made reiterated over and over again in teasers we have covered here on this site. See: Crash Proof Retirement and the 3 Stock Retirement Blueprint, among others.

Is Anything Being Teased At All?

As previously mentioned, Stansberry doesn’t tease any particular stock but rather talks about a series of events that has led America to face one of its deepest economic crises since 1929. The coronavirus outbreak simply brings to surface one thing that had economists worrying for a couple of decades now – “One major effect of the coronavirus is how quickly it exposed a massive problem in our society: that most Americans live far beyond their means… that no one saves any money… and that everyone has too much debt.”

The author also claims that the measures taken by the government to “protect people” from the new virus are not necessarily in the people’s best interest and that the phrase “We’re all in this together” is a lie, simply because every person is different and his/her life is affected differently by the pandemic.

According to Stansberry, staying at home “to flatten the curve” “sets a dangerous precedent that will surely be exploited for years to come. As the government’s getting used to ordering us all around”. The author does speak some truth here, as the American population has been hit harder than other nations because the combination of too much debt and little savings (7.6% personal savings rate) adds to an additional amount of distress.

Stansberry mentions that “within weeks, half of the country needed bailouts”, which only points out how serious, fragile, and dangerous the situation is. He goes on to talk about the disappearance of the middle class and how the median wages of today are actually less (when adjusted for inflation) than they were back in the 1980’s. Putting it simply, only richer people who on average make over $100K per year can afford to work from home during this time, as opposed to only 41% of those who earn less than $24K a year, as there jobs are location-dependent.

Stansbery delves deeper into the problem, mentioning that even though the US economy and stock market has boomed “for the better part of the last 30 years with some blips, most Americans are actually worse off than they were decades ago.” A major part of the problem he identifies is the lack of financial or economic education, which causes people to unnecessarily spend. For instance more than 1 million people are willing to go into $1,000 of debt only to purchase the latest model iPhone.

An alarming statistic Porter points out is that a staggering “73% of Americans now die with debt”, with the average debt being around $61,000. The main reason why people find themselves in debt more than ever is that wages are no longer connected to gains in productivity.

While the net productivity “rose 73.7% from 1973 to 2016, hourly pay has essentially stagnated”, which means that most of the people’s profits from any productivity gains went into the pockets of big corporations rather than finding their way back into their own pockets.  So, what is causing this major underlying discrepancy? Stansberry believes that a major factor is played by the fact that the US dollar is now a fiat currency or a piece of paper with no actual value, as opposed to what it used to be decades ago – the number written on the paper was backed by real value, as measured by gold. With the Treasury now printing more money than ever, it comes as no surprise that the US dollar is rapidly devaluing, with fewer people having faith in the number written on a fiat bill.

In the end, Stansberry gives us a rundown of many things we and many people reading this right now already know, while it is a good refresher it is only meant as a warm-up to sell us an annual subscription to his namesake newsletter, albeit at a discounted annual price.

Even though the author doesn’t mention any company or tease an investment in any particular industry, he does make some great points about why the American economy may be on its very last leg, when considering the entire confluence of factors, which is like a lethal cocktail when you sit down and really think hard about it.

You could definitely do worse than an annual subscription to Stansberry Research. But with that said, we didn’t hear anything mentioned that you cannot get for free elsewhere. So unless we are talking about proprietary stock picks and good fundamental business analysis, we see no reason to fork over the annual subscription cost at this time.

What do you think about Stansberry’s claims? Do you think he makes some valid points regarding the current and perhaps future state of the US economy? Do you currently hold any investments or assets to hedge some of these bets? Would love to hear your thoughts on this one in the comment section below.