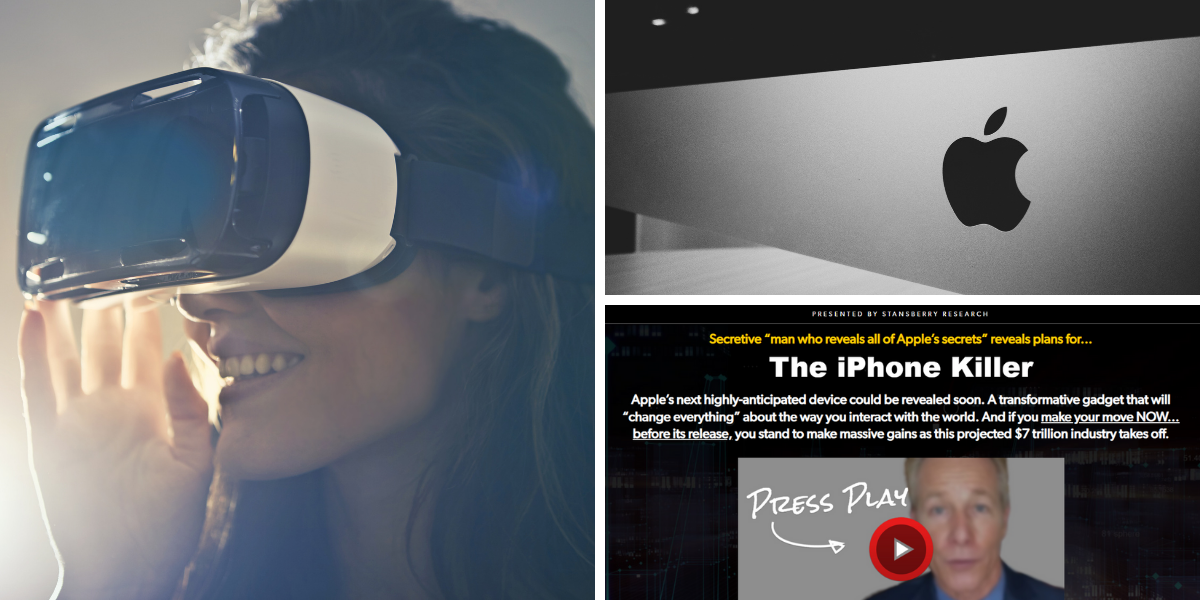 There is an entire cottage industry of commentators, bloggers, and reviewers that has built up around Apple and its products – a cult following if you will. So when we say that the company’s next highly-anticipated device could be revealed soon, ears are bound to perk up.

Brian Tycangco, a senior analyst for Stansberry Research tells us that “a secretive man who reveals all of Apple’s secrets” is about to reveal plans for “The iPhone Killer” that will “change everything” about the way you interact with the world. It’s all about augmented reality and he claims the potential is huge.

Let’s find out what augmented reality stock is being teased here.

The presentation starts off by saying that Apple’s next breakthrough could be announced any day and that “it could be the biggest new tech device not just in Apple history”, but in your lifetime. A lofty claim we won’t hold our breath to come true, for serious risk of asphyxiation. 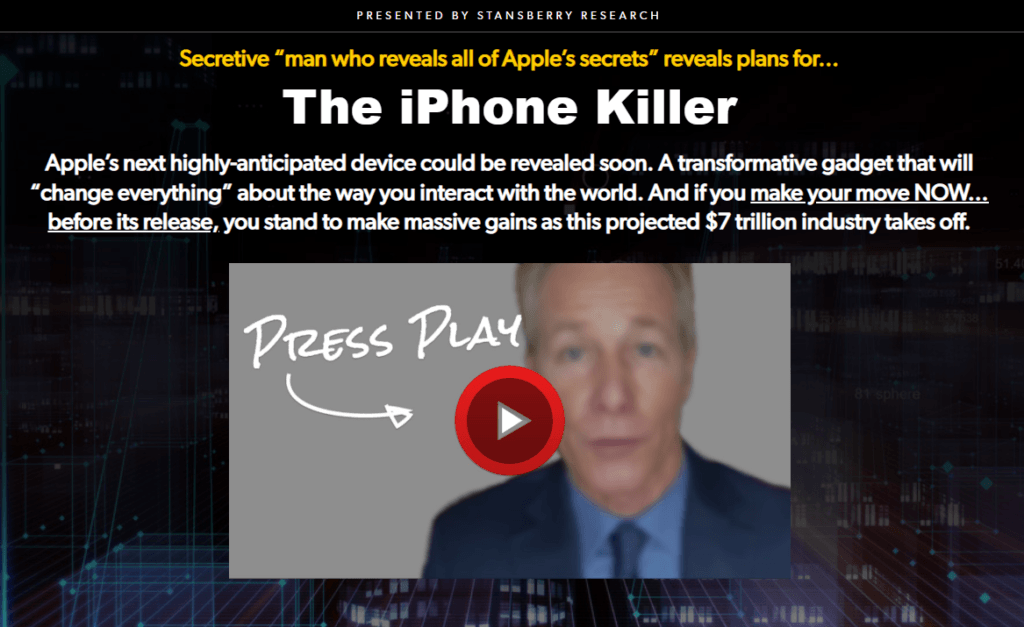 Brian Tycangco is based in Asia and joined Stansberry Research in 2019 to help the publisher develop its True Wealth Opportunities: China newsletter. Brian been working in the equities markets since 1995, starting out as a trader and later as a financial analyst with BNP Paribas, before becoming a financial writer and editor. We have covered some augmented/virtual reality presentations here in the past, such as Jason Simpkins’ Invisible Detection Tech Stock and Stephen McBride’s Computer Vision Stock, among others.

Even Apple CEO Tim Cook predicts this new technology will “change the way we use technology forever”. Before moving forward Brian explains that this has nothing to do with “Project Titan,” Apple’s code name for its self-driving car or any other secret Apple project you may have heard of, for that matter. He’s convinced this will be one of those major life-changing tech-industry moments.

All this said, investing in Apple is NOT the best way to cash in on this new development, instead Brian says he’s found a much more exciting opportunity that he thinks you should act on immediately and he’s going to show us what it is today. Of course, what Brian is hinting at here is Augmented Reality (AR), which will go ‘mainstream’ once Apple announces it’s first AR headset.

Given Apple’s string of consumer tech wins – from the iPod in 2001 to the first iPhone in 2007 and the iPad in 2010, it may do some good to pay close attention to this announcement given that most major consumer tech products in recent memory have been pioneered by the tech juggernaut.

Before we can get more info on the under-the-radar suppliers behind this technology or the name of any stock, we will need to subscribe to Stansberry Research’s new Visionary Investor service for $199, which will include the brand-new report called: The #1 Augmented Reality Component Maker: An Under-the-Radar Stock to Potentially Make Triple-Digit Gains as Apple’s New Augmented Reality Device Takes Off. 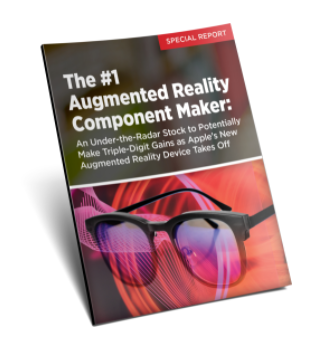 Included in your annual subscription will be 12 monthly investment research reports and two special reports, including the aforementioned at a discount of 75% off the regular subscription cost.

What in the World is Apple’s Augmented Reality Device?

While there hasn’t been any official announcement about a new AR device from Apple and Brian does not have any secret information about this project. His research makes him confident that an announcement could be coming soon.

There may be something to this, as Apple has left a trail of publicly available clues for all to see. These include, patent filings for this new device, countless job postings related to the new technology and headlines about strategic partnerships to make such a device a reality. 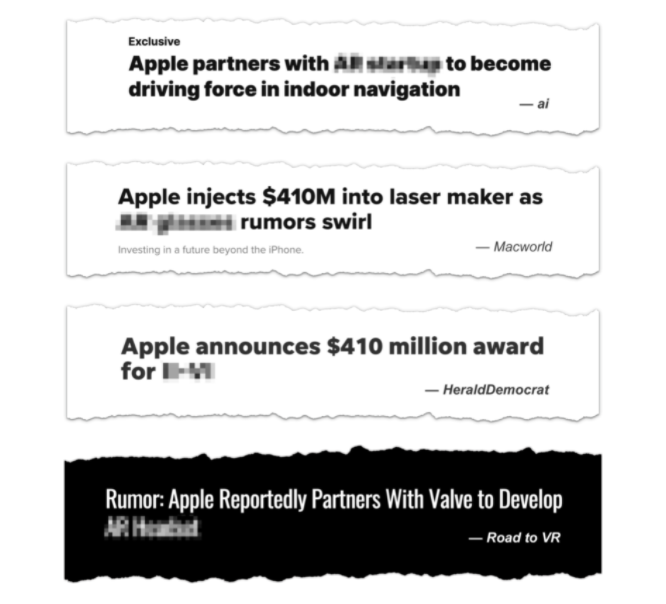 Most importantly, Brian has been closely tracking the reports of a secretive tech analyst recognized by tech watchers as “the man who reveals all of Apple’s secrets”. The name of this ‘prophet’ is Mr. Ming-Chi Kuo, he’s an analyst at TF International Securities, an investment firm in Hong Kong.

Unlike most Wall Street analysts in the U.S., he’s incredibly secretive. In fact, there are only three confirmed pictures of him known to exist online. Despite this or perhaps because of it, he’s amassed a decade-long track record of identifying Apple’s next products — often months before the official announcement. Right now, as you can probably guess, Ming-Chi Kuo is predicting that Apple’s first Augmented Reality headset will be released in 2022. Kuo anticipates Apple’s forthcoming AR headset will weigh between 3-10 ounces, be priced around $1,000, and provide a “video see-through AR experience”.

According to Brian, this will kick off the hyper-growth phase in AR and begin an “arms race” of companies rushing to own this space. Even though Facebook, Google, Microsoft, and Amazon among others, are all working on their own version of augmented reality technologies and applications, Brian is convinced that mainstream acceptance of this new technology will “ONLY happen when Apple releases its first AR device”.

The problem is, Apple already has a $2 trillion market cap. So it is NOT the stock to buy right now to make money on this new trend, having already seen its best days. Fortunately for us, Brian says that he has found an even better opportunity. Let’s see what he recommends we buy into instead.

Here are some of the clues Brian left behind to help us identify the Apple supplier:

Based on the info above, a close fit is Flex Ltd. (Nasdaq: FLEX), while we are not 100% certain given Apple’s supply roster depth. It does closely match the clues provided:

The question now becomes, is it the type of business that can return 1,000% or more as Brian seems to think?

Flex currently trades at a low relative multiple of 12x current earnings, however its operating and profit margins both fall below 5%, which is low even for a manufacturing concern.

The company also has a total debt/equity ratio of 127 – that is high by any measure and a sure sign that trouble could follow if there is any slow down in business and cashflow decreases. The Apple AR headset component supplier angle is interesting and could contribute to results, but the company doesn’t seem to anticipate much of a bump, at least not over the short-term, as its updated fiscal year 2022 guidance expects revenue to increase from $25.5 billion to $26.5 billion.

Not exactly the stuff of triple-digit returns.

Are you an Apple shareholder or closely watch the company and its ecosystem? Do you think augmented reality is really the next big thing? Share your thoughts in the comment section below.