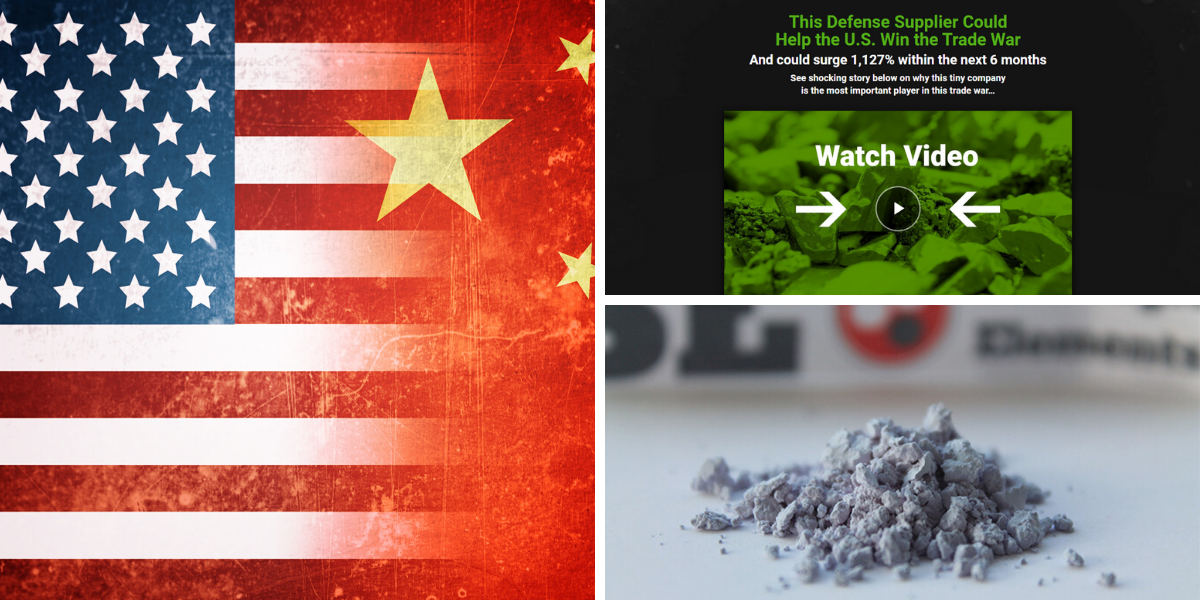 Chris Reilly (from Casey Research) has been teasing the opportunity to invest in a small "defense supplier" company for the chance to make 11X gains. But what the heck is he teasing and is it even worth it?

In this short review I'll be exposing, ticker symbol and all, the stock he's talking about.

Flash Alert: Don't get your hopes up on those 11X gains.

There might be multiple teasers going around the internet for this opportunity, but what I came across was titled "This Defense Supplier Could Help The U.S. Win the Trade War"... 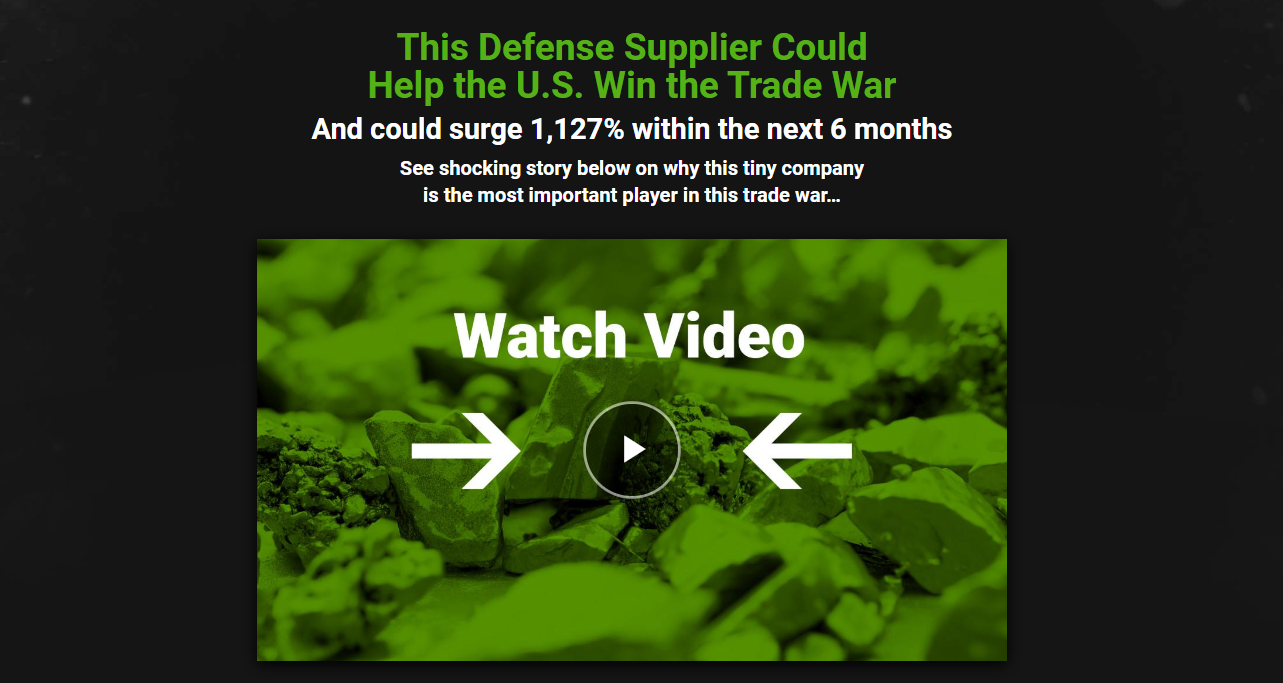 Chris Reilly is the guy behind the teaser. He is a senior managing editor at Casey Research, which is the same investment advisory firm that was behind the "5G Master Key" and "Omega Shares" teasers. Reilly doesn't actually run any investment advisory newsletter services himself at Casey Research, but instead is promoting one of Nick Giambruno's newsletter services through this teaser.

But anyways... what we are told is that the US/China trade war is heating up and that China controls a "kill switch" that puts the US and other countries in great danger.

We are told that Chinese stole this "kill switch", and the teaser goes on to talk about a story of espionage where the Chinese took control over a company called Magnequench (bought it), who refined a specific rare-earth element important to US defense technology. This company actually supplied 85% of this refined-earth element to the Pentagon, but after the takeover they moved from Idaho to Tianjin, China.

It sounds crazy, and to be honest the I don't believe the teaser to be 100% accurate. It seems more to me that the company would have went bankrupt if the Chinese hadn't stepped in and bought it out. And by the way, in the teaser he was referring to business espionage, which Magnequench was cited for by the US International Trade Commission (was also cited for patent infringement).

A "tiny company" ready to save the day..

But that is all old news.

We are told of some new company, a "tiny company", that is hear to save the day for America.

Reilly calls it the "next big defense supplier", and says it is "vital to US national security" because of how it is outside of China's grasp.

As far as the investment opportunity goes, we are told that:

Well, China has had a stronghold in rare-earth metals since forever. For example, the U.S. imported $160 million worth of rare earth minerals in 2018, most from China.

But these numbers might be changing in the US's favor if this particular company can start ramping up its operations, which it's in the process of doing.

All the details on the company are included in a "free report" that Casey Research is giving out, called De-Fang the Red Dragon and Make 11X Your Money... 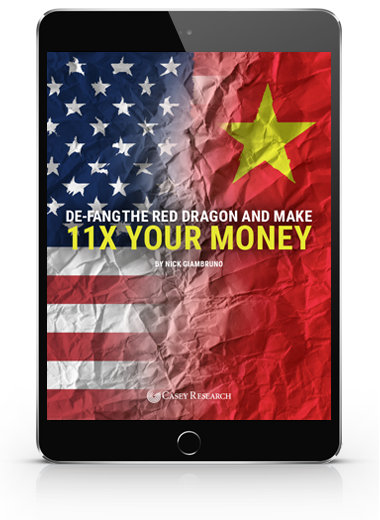 How do you get this "free report"?

You guessed it! Of course you have to purchase a subscription to one of their investment advisory services.

The advisory service being pushed here is Crisis Investing. This is run by Nick Giambruno and costs $1,795/yr (at a discount). It's another follow-along style newsletter service that tells subscribers what to invest in and when.

*Note: They don't give out refunds on this subscription. So don't buy in unless you are sure.

When Chris Reilly refers to the "kill switch" technology that China has, he's just talking about China's dominance on the rare-earth metals industry. 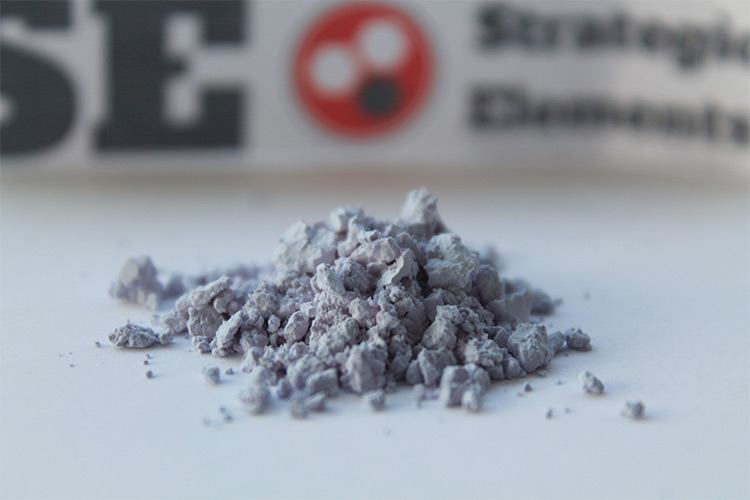 Neodymium is used with praseodymium to create permanent magnets, some of the strongest you can find.

What is so important about magnets?

Well, in this case Chris Reilly was talking about their importance to national security.

The science behind it can be confusing as heck if you're not familiar with it, but just know that magnets are a critical component for infrared guided missiles, which are heavily used by militaries around the world.

What Is This "Defense Supplier" Company?

Okay, so China, once again, is a threat to the US. While the situation likely isn't quite the "kill switch" apocalypse that Chris Reilly leads us to believe, it is serious and this is why the US government is making efforts to reduce China's stronghold on rare-earth metals.

To the point - what the heck is the name of the company he's teasing, which he claims can save the US from impending doom?

Well, let's take a look at some of the clues we were given:

There's really not much to go off of here, but luckily there aren't many choices as to what this company could possibly be in the first place, and so it wasn't too hard to figure out.

The company being teased is Lynas (LYSCF), which is a rare-earth mining company with headquarters in Australia and Malaysia.

There were some statements I couldn't find an exact match for, such as how Reilly mentions this company controls 9.6 million tons of rare-earth metals in a US-friendly country - but then again, Lynas' big operations are in Australia and Malaysia... both "US-friendly"... and they supply over 10% of the world's rare-earth metals. So, this statement could be a match.

Is this going to be the 11X gainer that Chris Reilly tells us it will be? Will you be able to buy a private yacht at this time next year? Should you start thinking about what fancy sports car you should buy?

Well, you never know... but I wouldn't put my life-savings on it, that's for sure.

The thing about these types of investment teasers is that they are highly speculative. There are a lot of "ifs" that must play out for this whole situation happen as Reilly thinks. It's true that Lynas is positioning itself well and that the tensions between the US and China could help propel this stock into the stratosphere, but only time will tell.

As always, we suggest doing your own due-diligence before investing... and not falling for the hype of these investment teasers.

And there you have it folks! You're welcome!

I hope this short review has provided some value to you. Now you don't have to buy into the subscription being pushed just to find out what he's teasing.

As always, leave your thoughts on this pick below. We like to hear back from our readers!