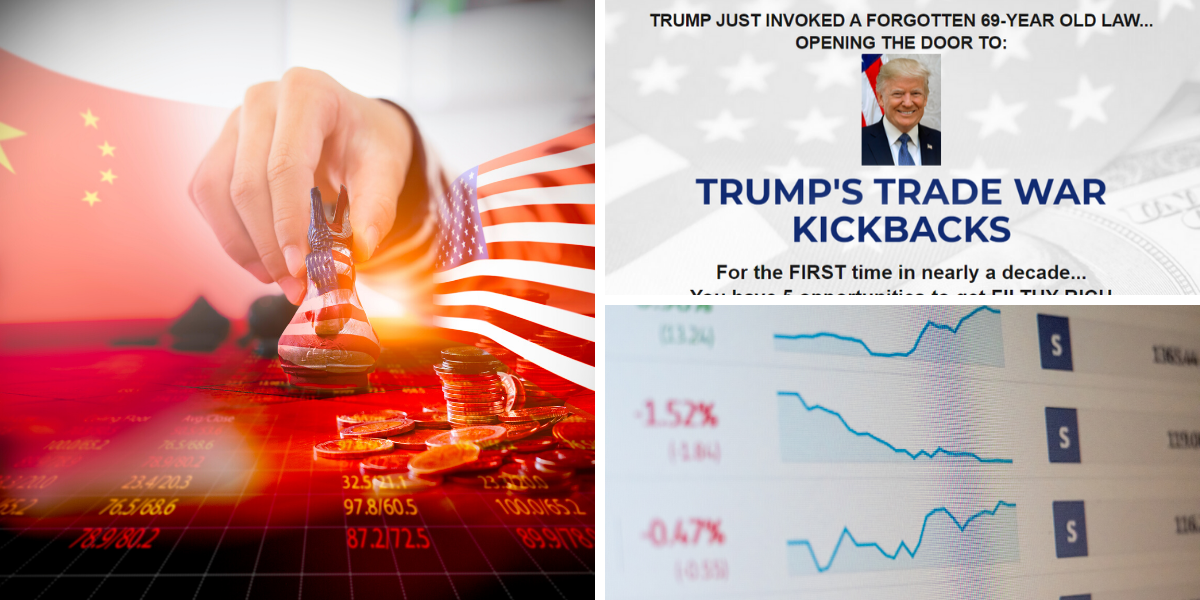 Keith Kohl is back at it teasing another investment opporutnity, this time for what he calls "Trade War Kickbacks". He claims that these payments are something Americans "could begin collecting as early as today"... and he claims you can get "filthy rich" with them.

But... please, please, please don't fall for the hype. These opportunities are never quite as amazing as they sound at first, and in this review I'll be exposing what's really going on here.

Can you make money with Trump's "Trade War Kickbacks"? Yes, but it's not what you'd expect after hearing the overly over-the-top teaser. Let's begin by talking about this...

There might be multiple versions of this teaser floating around, but what I came across was this, titled "Trump's Trade War Kickbacks"...

Keith Kohl is the guy behind it all. He works for Angel Publishing (aka Angel Financial) where he runs investment newsletter services, which is the point of the teaser here. His expertise lies in the field of global energy, where he often alerts readers to energy investment opportunities, but he also has knowledge of the natural resource industry and it is this that he's relying on here with this presentation.

This particular opporutnity, which he's calling "Trade War Kickbacks", is something that he claims "could dwarf" any other investment opportunity he's alerted subscribers to.

But then again, it seems like he's aways saying things like this for every teaser he comes out with.

Anyways... Keith starts off saying that "No matter what happens in the markets moving forward, you'll have FIVE opportunities to get filthy rich."

It all has to do with how Trump "invoked a largely forgotten 69-year-old law" - more on this in a bit - and we also know that it has to do with "critical elements".

Throughout the overly-hyped presentation, Keith Kohl shows a bunch of people that have supposedly been making a lot of money with these "Trade War Kickbacks", one guy even making $10,054 in one day - supposedly.

He basically makes it all seem like some sure-fire way to get rich quick, which it is ABSOLUTELY NOT.

What is the law he's talking about Trump signing?

It's the Defense Production Act (DPA).

Back in 2019 Trump evoked it under Section 303(a)(5) of the law stating that "rare earth elements", aka "critical elements" are "essential to the national defense".

And again, more recently, Trump invoked the Defense Production Act due to a lack of medical supplies caused by COVID-19. COVID has increased tensions between the US and China even more and has made it more apparent that the US needs to have more control over important things such as critical elements, which are needed in everything from consumer electronics to missiles and munitions paramount to the country's defense capabilities.

In the teaser it was mentioned that it has only been evoked 4 times prior to Trump, but I'm not entirely sure what Keith Kohl means by this because according to Wikipedia it has been "reauthorized over 50 times"... in one way or another since it's founding in 1950.

How much can you make with "Trade War Kickbacks"?

Well, he tells us that "investors got disgustinly rich" the last time this law was invoked... but this is an entirely DIFFERENT SITUATION and I would take everything that you are told with a giant piece of rock salt.

Back in 2010 China put a quota on critical elements, which they hold 80% of the supply of, and after doing this stock prices for companies dealing with these critical elements, such as lithium, cobalt, graphite, etc. soared in price... 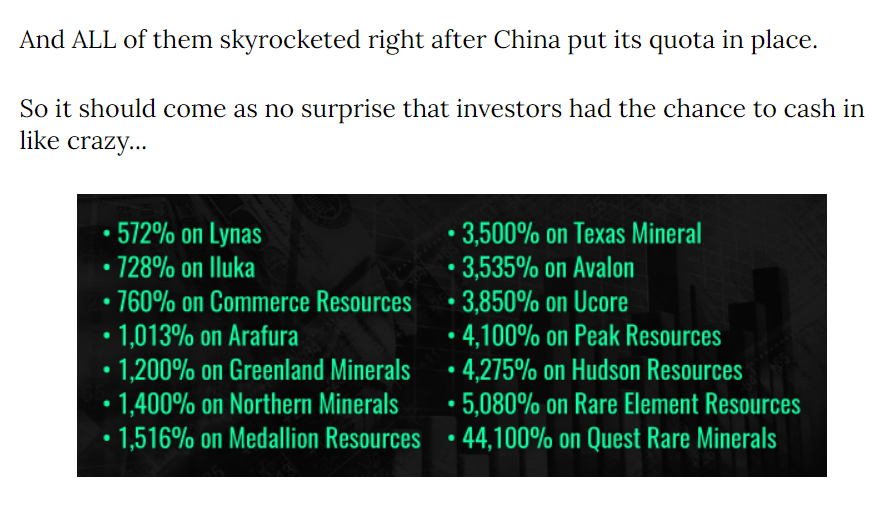 Now what Keith Kohl claims here is that the "kickbacks" we'll see today "could be 20 times bigger".

He goes on to claim that it "could look like chump change next to what’s about to happen".

That's a lot of hype... and of course it all ended in a sales pitch.

Kohl is recommending investors get in on 5 different stocks dealing with critical elements... and he has 5 "free" reports that he's giving out providing the details on each... 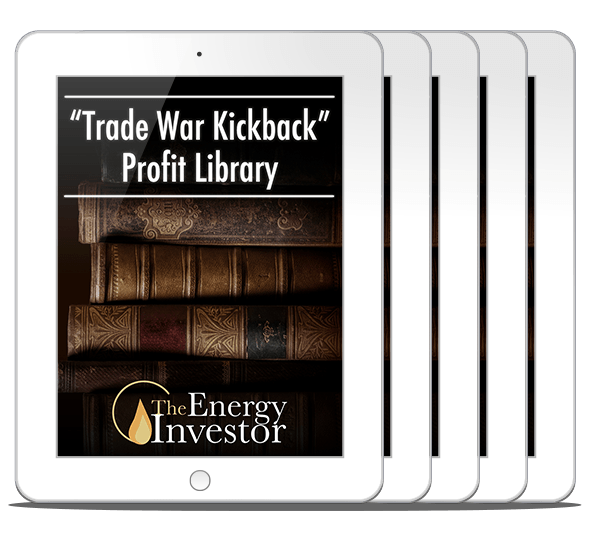 The reports are "free", acording to him... but you will have to take out your credit card if you want to get your hands on them.

Now is that really free? Well... you be the judge.

To get the reports you need to subscribe to his investment advisory service, Energy Investor, which costs the discounted price of $99/yr and provides subscribers with investment recommendations on a regular basis.

What Are These "Trade War Kickbacks" Really?

As was stated, Trump has used the DPA to stimulate domestic mining and processing of critical elements right here in the US, such as how I mentioned he did so in 2019. This was to spur the production of neodymium and samarium, two "critical elements" that are used in missiles.

*Note: Casey Research was teaseing a Neodymium mining company not that long ago that I exposed. They were using a similar teaser to lure people in.

The whole "trade war kickbacks" opportunity is simple... you invest in the companies behind the mining and refining of these elements.

This is what's being teased, and Keith Kohl has 5 stocks in particular that he thinks investors could get "filthy rich" from.

What are these 5 stocks?

Let's see if we can expose any of these stock picks. But first, it's worth mentioning that Trump's actions to simulate the production of critical elements only applies to certain ones... and not some of them that Keith Kohl mentions. As usual, what is said in the teaser is misleading.

Both of his first two picks he claims have the potential for 1,000% gains.

What we know is that they:

None of those clues are all that great.

That said, I think there's a good chance Galaxy Resources (OTCMKTS: GALXF) is one of these picks. It trades for cheap and has its Sal de Vida project in northwest Argentina that is its main focus. Not only that, but it also has projects in Australia and Canada and is being looked at as a good option for investing because it has no ties to China.

Orocobre (OROCF) might be another potential candidate here. This is an Australian mineral resource company and big producer of lithium. It also trades for cheap and it has a lithium facility in Argentina.

These are just good guesses. There aren't enough clues given to really narrow down the search here.

*I'd love to hear what you think in the comment section below after you're done reading this.

The third stock pick is what Keith Kohl calls "the easiest 10-bagger you'll ever hear about".

What we know about this company is that it has to do with a cobalt supply in the US and it is "one tiny firm... in the driver's seat". It was also mentioned that a specific cobalt project this company is in on has already had $100 million invested in it.

Again, there is hardly anything to go off of here.

However... what do you think about Jervois (OTCMKTS: JRVMF), the Australian mining and exploration company that has the Idaho Cobalt Operations project? Could this be the pick? After all, there have been multiple sources stating that $100 million has been invested in developing the US-located cobalt mine. And it also trades for very cheap.

I think it's a definite possibility.

The fourth stock is one that Kohl claims you could 50x your money on.

He calls this one "Alaska's Kingpin" and claims it is "in an exceptional position" to capitalize on increasing demand and is "set to absolutely explode".

Pretty much all we know is that it is a company that is about to start mining graphite in an area of Alaska where 92 million metric tons were recently discovered.

The lack of clues isn't surprising, but I'm fairly confident in my guess of this company.

It seems to be Graphite One Inc (GPHOF).

Why am I so confident? Well, because it looks like a good pick first of all. And not only that, but in 2019 the estimated resources at its Graphite Creek project located in western Alaska were increased to "approximately 92 million metric tons of ore", which was a 29% increase from earlier estimates.

The numbers match up and I don't think it's a coincadence.

And the last play that is teased is one that "gives you the chance to get in on 20 'Critical Elements' at one time".

That's all the information we are given on this one, so obviously I'm not going to be able to do much with it.

It seems that investing in solid critical element companies that are either in the US or are US-friendly could be a good idea.

The US doesn't want to rely on China so much anymore, and it's true that Trump signed off on pumping money into this industry.

Not only that, but many of these critical elements could be solid investments without even considering the trade war. Lithium, for example, is predicted to see huge increases in demand as electric vehicles continue to take over the auto industry. This is actually something that's been teased a lot lately and we recently exposed Dave Forest's "4 Lithium Company" he's claiming could "provide substantial wealth".

Anyways, I hope this review has provided some value to you. I explained what exactly this is all about and did my best to filter through the BS and uncover some of his stock picks.

As always, let us know what you think about these picks in the comment section below. Will you really get "filthy rich" from this?