This article is primarily written as a review of Neil Patel’s Private Deal Flow,  an Angel Investment offering, but it would be a significant omission not to delve into who the man at the centre of this offering is.

Neil Patel is something of an online media ‘rockstar’, widely followed on Facebook, Twitter, YouTube and several subscription based (and probably some ‘free-ones’ too) newsletters. Neil Patel is widely acknowledged as a leading and authoritative influencer in the field of digital marketing. Listed by Forbes as one of the top ten marketers, he counts among his clientele, the likes of Facebook, Google, Amazon, Microsoft, General Motors et al.

As a prolific entrepreneur and angel investor (a person who ploughs funding capitol into initially small privately owned start-up enterprises for an ownership stake in these enterprises), Neil Patel operates 4 companies with a global presence.

‘Hello Bar’ a highly rated plug in tool, designed to address the fact that 98% of website visitors take no further action before leaving.

His success in the realm of digital marketing notwithstanding, Neil Patel has of late, increasingly focused on high yield investments and more specifically; angel investing or private deal flow.

The underlying concept of angel investing / private deal flow entails investors getting in early as private investors before the likes of Wall street and venture capitalists get to avail themselves of the IPO opportunity.

The Angels & Entrepreneurs Network is another Neil Patel connected subscription based newsletter service intended to advise potential investors on private deal flow / angel investment opportunities. The advice is compiled by a collective known as the Angels & Entrepreneurs Advisory Board. The advisory board is comprised of members with specialist knowledge of start-ups and angel investing from all around the world.

The yields claimed for Angel investors give new meaning and dimension to the word “spectacular”.

The word “private” in the ‘The Private Deal Flow’ context, refers to angel or private investing in companies before they reach the phase of an IPO. The fundamental concept is that by making an early private capital investment in a company before it attracts  venture capital or goes the IPO route, one can make spectacular returns on one’s initial investment.

Below is a comparative graphic illustrating the incredible yields possible from Angel investing verses IPO investing.

Looking at Pinterest as an example we see that the Angel investors obtained a 583,264% yield verses a 28% yield for the IPO investors.

We can clearly see that Angel investing has the potential to create inordinately high returns on investments but this must be balanced against the reality that none of these investments guarantee a return. 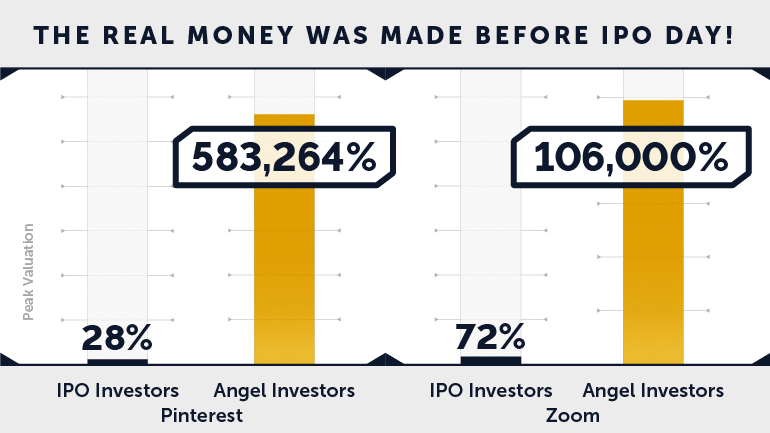 How does it work?

What is the Track-record?

At it’s core, the Private Deal Flow relies on the ‘early bird’ concept. Investment picks are made in companies offering innovative products and services with high potential yields prior to these companies embarking on the IPO phase. The underlying concept is that the raising of private capital early on in the genesis of a company through the acquisition of equity by angel investors offers vastly greater returns than post IPO investing. The choosing of companies as suitable subjects for Angel investing / Private Deal Flow, is based on thorough research on the part of the Angels & Entrepreneurs Advisory Board.  Subscribers to the investment advisory service receive a list of recommended investments with associated due diligence reports.

The Angels & Entrepreneurs Network is another subscription based share recommendation service that was established by Neil Patel and his associates as a vehicle to give ‘small investors’ normally precluded from accessing lucrative share-based opportunities the opportunity to beat the institutionalized investors and venture capitalists to the investment opportunity.

It is unclear if the investment tips that originate from the Angels & Entrepreneurs Network are shared with the subscribers to the Neil Patel’s Private Deal Flow or vice versa. The price of the subscription models offered by the Angels & Entrepreneurs Network  and the Neil Patel’s Private Deal Flow, vary considerably. One would need to make a well considered comparison in order to decide on the best value option.

Much is made of Neil Patel’s direct association with the Private Deal Flow. Access to many of the Angel investment opportunities is supposedly due to Neil Patel’s access to and association with the leadership of numerous Fortune 500 companies.  It is claimed that when executives from many of these Fortune 500 companies break out on their own to start new ventures, Neil Patel is often a first port of call for his digital marketing and other advisory skills. Another consequence of this is that Neil Patel gets the ‘inside track’ on the investment opportunities offered by these new ventures. This access to ‘first bite’ opportunities to Angel investing, places Neil Patel in a strategically advantaged position which should translate to high quality recommendations for his subscribers.

Investment recommendations are also offered in later stage investment rounds, an example is given of Facebook’s ‘Series C’ investment round. At that stage Facebook was already worth an impressive $ 15 billion, a subsequent surge took the valuation to $ 627.9 billion or a 4085% increase. This represents an explosive return on what was a relatively conservative (in terms of risk) angel investment given that Facebook was an already established and promising brand.

You get the informed opportunity to invest privately in companies bringing highly lucrative and innovative products and services to the market.

A newsletter covering current applicable legislative easing and other investment trends. The proposed SEC easing of private investor restrictions are covered in detail. Proposed changes which entail the raising of limits of crowd funding campaigns and the removal of confidentiality restrictions that the SEC imposes on crowd funding raises. If the new regulations are affected, companies will be able to ‘feel out’ the market before embarking on raise efforts. This would reduce the risk of an unsuccessful crowd funding raise due to ill timing or other factors. The reduced risk of unsuccessful crowd funding raise attempts will in all likelihood increase the number of companies bringing Angel investor opportunities to the table. This would result in a substantial increase in investment opportunities made available as Private Deal Flow before they are accessed by public investment funds.

The creation of a legislative environment that is conducive to Angel investing has the potential to exponentially increase the opportunity for trickle down wealth creation.

The Angels & Entrepreneurs Advisory Board perform due diligence and issue a list of potentially hugely lucrative angel investment ‘deals’. The deals span an incredibly wide range business and product sectors. Sectors covered include but are not limited to; biotech, Silicon valley innovators, disruptive business models and E-powered vehicles. Two examples given are companies with revolutionary offerings on the front of medical procedure innovation, one being a cardiac surgery procedure and the other a surgical method for drastically improving and simplifying the procedure knee replacement surgery. The evaluation of the recommended Angel investment opportunities by dedicated experts should greatly reduce the risk of these Angel investments.

As is the case with most of the recent newsletter based share recommendation services, of which there are many on offer, there isn’t much proof of specific past success. It is prudent to make use of the credible reviews of these offerings so as to obtain a more balanced view. Many of the quoted examples are ‘generic’. The examples that illustrate the spectacular yields of Angel investments in companies like Zoom and Pinterest are effective in demonstrating the spectacular results possible, these are, however, not actual results of the Neil Patel’s Private Deal Flow.

As stated earlier in this review, there is a heavy reliance placed on Neil Patel’s reputation as a means of underpinning the credibility and promoting Neil Patel’s Private Deal Flow.

Neil Patel’s record as a spectacularly successful angel investor needs little introduction. The term angel investor loosely defined, applies to investors who privately plough funds into start-ups or new innovative product manufacturers. There is also an implied altruistic / spread the wealth aspect to Neil Patel’s efforts and motives. A key feature is the early placing of the private investments, before the investment opportunity is offered to the likes of Wall Street and other members of the traditional equity establishment. Regulators like the SEC seemed to have bought into the Angel investing rational as indicated by the proposed easing of restrictions and raising of private investor limits.

The cost of subscribing to Neil Patel’s Private Deal Flow is $5000 per annum, this is definitely more costly than most other investment advice newsletters. There is no stated refund policy and there don’t appear to be any special or discounted offers. There  are a number of  other subscription newsletter options connected to Neil Patel at the time of this review. The Angels & Entrepreneurs Network offers a ‘Diamond’ level membership @ $79 and a ‘Gold’ level membership @ $39 as time limited discounts. These ‘special offers’ are offered to limited numbers of new signees on a seemingly daily renewable basis.

Although this is a review of Neil Patel’s Private Deal Flow, one should evaluate and compare all the offerings associated with Neil Patel. A comparison with some other authoritatively evaluated offerings would also add some perspective

The ‘Neil Patel’s Private Deal Flow’ proposition has at it’s centre a differentiating approach that appears to have the potential to yield spectacular gains on the initial investment.

The high price of the subscription may prove to be a barrier to the less financially resourced investors, the very people who are supposedly being offered the opportunity to create transformative and generational wealth. All the usual cautions and caveats apply, the main one being, don’t invest money you can’t afford to lose.