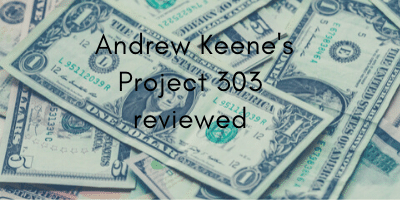 Written as this is, as an objective review of Andrew Keene’s Project 303, due diligence has to include some background information on the man intrinsically linked with the product. As with many other subscription based trading advisory products, a key aspect of the marketing strategy is the direct association with a celebrity trader, in this case Andrew Keene.

Andrew Keene is a graduate of the University of Illinois –College of Business. He is the CEO and President of AlphaShark Trading which has numerous offerings targeting the realm of trading. Andrew is at the top of a list that features high profile traders. Having appeared regularly as a guest market commentator on CNBC’s Trading Nation, Fox Business and Bloomberg TV, Andrew enjoys an elevated media profile.

AlphaShark Trading was born out of KeeneOnTheMarket.com which Andrew established in 2011. His trading career started at the ‘Botta Capital clerk-to-trade’ program. Other roles include employment at the Chicago Board of Options Exchange where he worked as a propriety trader. He is a co-founder of the KATL Group.

Although Keene’s stated first love is trading, he is equally well known for creating a trading room where he claims to have schooled upwards of 50,000 students in his personal trading strategies over a period of 4 years. 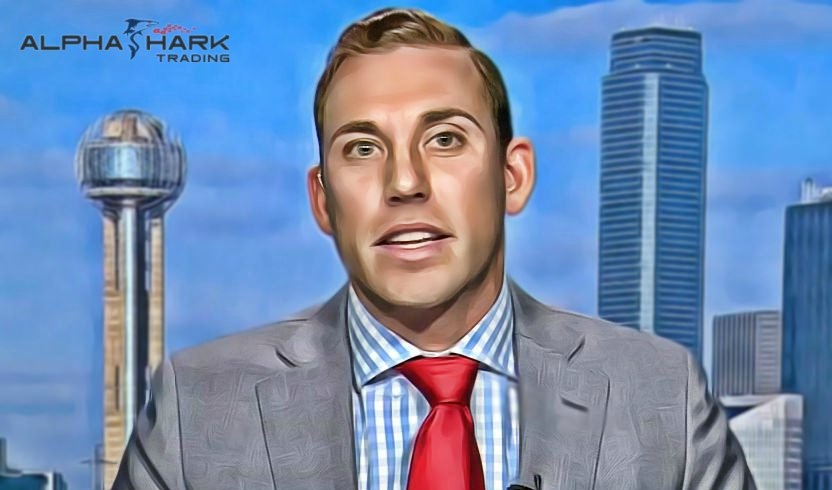 The AlphaShark Trading team lead by Andrew Keene is also comprised of:

As evidenced from the above, the AlphaShark Trading team embraces extensive experience and harnesses a formidable skill set.

There are a multitude of other products including on-line courses, videos, books and pamphlets, ranging in price from $5000 to $9,99. These products are marketed in a collaborative effort with Money Map Press. The AlphaShark Trading team emphasize their commitment to training and educating ‘ordinary people’ to become informed traders across the complete spectrum of trading. There may well be an element of altruism but the sales of the various  training material must be fairly lucrative when one considers the expanse of the online market. Embracing equitable (re)distribution of wealth through the espousing of accessible training appears to be an increasingly popular narrative among those offering subscription based advisory services. 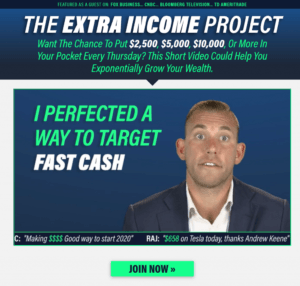 Spectacular claims of huge profits made over short timeframes characterize much of the marketing information published by AlphaShark Trading. Very little mention is made of losses and the comparison offering the view that options trading is the most lucrative form of trading is pushed very aggressively. The point is driven home emphatically that the potential for profit margins of 45% and more far exceed the 7 to 8% possible with traditional  methods of trading stocks. Andrew Keene talks of his personal experience of going from a few hundred dollars liquidity to personal cash resources amounting to more than 5 million dollars in a period of two years. He directly attributes this spectacular success to his call and put options trading method.

Whereas many trading advisory services caution against the expectation of ‘quick riches’, Andrew Keene makes a bold show of “I perfected a way to target fast cash”.

The opportunity “to put $2,500, $5,000, $10,000, or more in your pocket every Thursday, is an attention getting claim that bears some scrutiny and verification. Emphasis is placed on the fact that Project 303 does not involve trading in Bonds, Cryptos, Gold, Futures or Shorting Stocks.

Andrew Keene states that during the market crash of 2008 he developed a unique way to trade options that has the potential to produce typical yields of up to 52 X your initial investment. An effective illustration is made of how trading options substantially outperforms trading stocks.

At the risk of over simplifying the concept of options trading; An option is a contractual right not an obligation, allowing the recipient (option buyer / option holder) the right to conclude a purchase or sale of a defined asset at a predetermined price (strike) before the expiration of an agreed timeframe (options term). The person placed under obligation by the option is the originator / option writer / option seller. The call option entails the right to purchase while the put option entails the right sell.

Andrew Keene in collaboration with the publishers Money Map Press, does, however, offer training in the various alternatives to options trading.

What is Andrew Keene’s Project 303?

What is the track-record?

What is Andrew Keene’s Project 303?

The name Project 303 is derived from Andrew Keene’s suggestion that one can very successfully trade ‘call’ and ‘put’ options working only 30 minutes per day, 3 times a week. That in itself is a rather bold assertion but extravagant claims abound from the folks at AlphaShark Trading. Andrew Keene states that the options trading strategy developed by him and used in Project 303 is highly profitable with a minimal time investment. The claim is made that the system is so easy to implement that anyone can use it to make profitable options trades just by following the recommendations made by Andrew Keene.

You get access to so called ‘insider trading’ information through Andrew Keene’s proprietary system that functions as an early detection system of major trades. The information is harvested from a algorithmic program developed by Andrew Keene called S.C.A.N.

This program does detection of significant stock movements and highlights these developments very early on in their occurrence. These stock movements are usually the result of informed trades by the established trading firms who are acting on information not accessible to the wider trading community.

The subscription offer is subject to a ‘Founder’s Member’ time limited promotional and heavily discounted offer, which like many of the offerings from similar subscription based advisory services will probably be extended or replaced when it expires.  The Founder’s Member deal equates to you getting:

a) This training series covers how to simulation test the Extra Income Strategy without risking actual funds.

b) The best way to use Project 303 to fund your retirement.

c) How to use the S.C.A.N. program to avoid the most commonly made profit limiting mistake.

d) The recommended amount to put into every trade.

What is the track-record?

There is an extensive list of testimonials from apparently recently wealthy clients, all giving testimonials of sizeable returns on their trades and accounts of how Andrew Keene’s options trading tips have transformed their financial prospects. These testimonials, unverified and sensational as they are, must stir up a measure of caution on the part of prospective subscribers and investors. It is difficult to put aside a concern that there is an element of ‘smoke & mirrors at play. In the absence of credible proof of subscriber success, one must exercise due circumspection.

Andrew Keene gives the example of how he made spectacular returns on Pfizer. The S.C.A.N. program apparently detected increased activity around the Pfizer pharmaceutical producers stock which was very undervalued (short) at the time. The activity came in the form of 5 very large trades in Pfizer, the rapid responsiveness of the S.C.A.N. program is demonstrated by it’s detection and evaluation of the event despite the fact that these trades were concluded in a brief 14 minute period.

Andrew Keene states that duplicating his trade in Pfizer would have earned a subscriber $2000 for each $1000 invested over a period of less than 1 day. 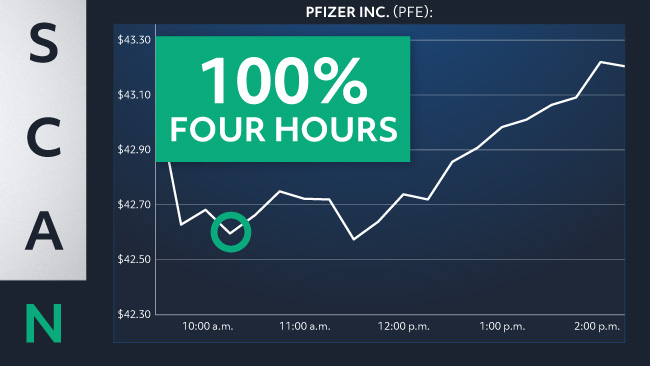 At the time of these massive trades the underlying motivation was not apparent to the vast majority of market investors, most had no idea these trades were even happening. It is patently apparent that the originators of the huge activity around the Pfizer trades must’ve had and shared prior knowledge of the FDA approval for the new Pfizer oncology medication. This is the basis of Andrew Keene’s claim that his program ‘spots’ insider trading’ activity. While Andrew Keene may not have been privy to the detail of this development around the new Pfizer ‘money-spinner’ drug, his S.C.A.N. program appears to have accurately detected and analyzed the market activity and opportunity. 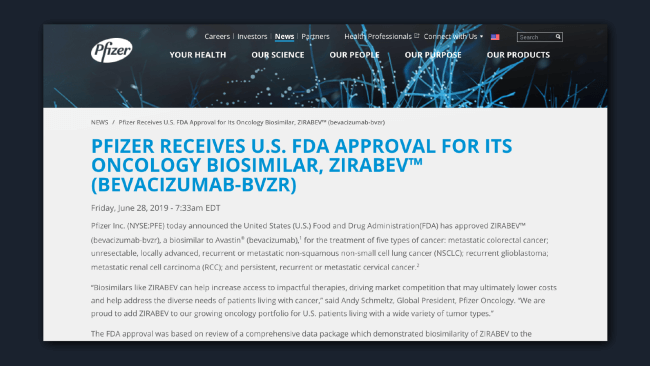 The $129 for 1 year or $199 for 2 years price of the Andrew Keene’s Project 303 is one of the lower priced offerings from AlphaShark Trading, one has to ponder the marketing strategy behind this pricing. This comparatively low pitch pricing may well be part of an upsell strategy to promote substantially more expensive AlphaShark Trading products like the 1450 Club @ $5000 per annum.

The refund policy is as stated as follows. “If at any time over the next 30 days you’re not completely satisfied with the research, analysis, gains, or anything else about Project 303. Just let them know, and they will promptly refund every penny of your subscription.” There is an additional guarantee that; “if you haven’t had the chance to double your money at least 25 X over the next 12 months, call us and we’ll refund every penny”. Note this is a guarantee of the refunding of your subscriptions and not compensation of losses incurred through trading.

Andrew Keene is a trader with a credible track record and reputation albeit with a penchant for excessive self promotion. The price of the single year and two year premiums is very competitive and seemingly good value, more so when one factors in the refund policy. While researching the Andrew Keene’s Project 303, a number of reviews of the same service were encountered that appeared to be little more than affiliate linked promotions of the product. That is not to say that there is anything patently wrong with promoting and deriving monetary benefit from affiliate relationships, there does, however need to be a clear and unambiguous declaration of such. Anyone reading these reviews needs to treat the conclusions with a healthy dose of scepticism. It would be wise to compare these reviews with the objective template applied in the review of a similar options trading advisory service.

In answer to the question is Andrew Keene’s Project 303 a scam? It is fair to say that there is no evidence to suggest that it is.

The relatively low subscription cost and refund policy make subscribing to Andrew Keene’s Project 303 a comparatively good value proposition. There are many competing subscription based advisory services, some of them targeting the same options niche. There also seems to be no shortage of ‘all-star’ investment gurus, many of them asserting high profile media recognition and acclaim.

It would seem that after critically applying one’s mind to several credible reviews, ‘one takes one’s pick and pays one’s money’.