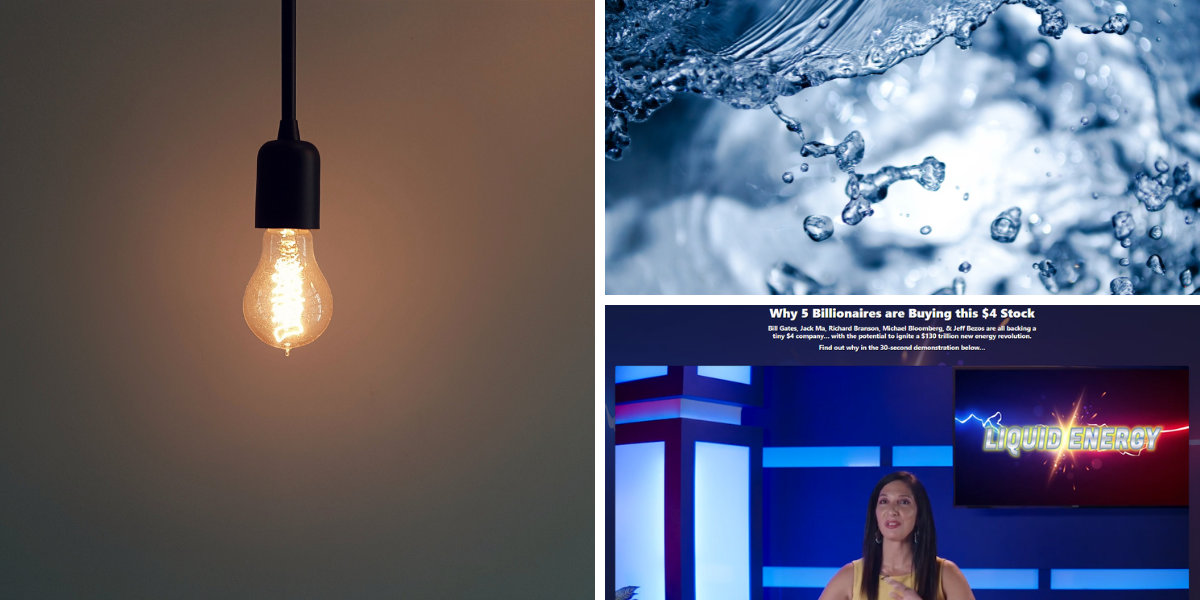 What do Bill Gates, Jack Ma & Jeff Bezos all have in common? They are all backing a tiny $4 “Liquid Energy” Company.

There is currently an epic battle raging on for the future of energy, but the key could lie with the liquid inside this cup:

Nomi Prins is known for her contrarian takes on financial markets. We have reviewed some of these here, including her “Great Distortion” Stock Pick and “The #1 Stock for America’s New Era.”

The energy battle is framed as Elon Musk vs. Everybody. On one end you have some experts asserting that just 100 Tesla Gigafactories could power the world with 100% clean energy and on the other, you have 5 of the richest men in the world betting that Elon is dead wrong.

This is the story of how one little-known company could dominate Tesla in this coming $130 trillion energy revolution and deliver massive returns in the process.

Nomi recently visited Musk’s Gigafactory in Austin, Texas and gives a live demonstration of her findings in this video:

To summarize, she says that Musk’s lithium-ion battery falls short. While in the same breathe saying that the mystery liquid, which is not lithium, cobalt or nickel is superior in nearly every way.

How? Well for starters, the lithium inside Tesla batteries costs about $150 a pound. But this liquid costs just 5 cents a pound! It’s rather simple economics. When you factor everything in, this liquid can store energy up to 94% cheaper than a Tesla lithium-ion battery.

It is also 100% environmentally friendly and safe, unlike Tesla batteries that are notorious for spontaneously combusting into flames.

Meanwhile, what Nomi is calling “Liquid Energy” is being hailed by The U.S. Department of Energy as a “breakthrough” that’s a “totally new approach to battery technology.”

There’s no question that we’re in a historic period of transformation, which could shift how the world creates, consumes, and uses energy everywhere. Some of the world’s biggest companies agree…

Apple has gone in with $4.7 billion, calling it “good business” and the world’s second largest energy company – ExxonMobil has gone even bigger with a $15 billion investment!

Let’s find out what the liquid that could eat lithium’s lunch is and the tiny $4 company whose battery can store energy up to 94% cheaper than a Tesla battery.

Nomi has put the name, ticker symbol, and a full write-up of Liquid Energy inside a brand new report: Liquid Energy: The #1 Stock for the $130 Trillion Energy Revolution.

All we have to do to get our hands on it is try out Prins’ monthly research service The Distortion Report. The regular price for the service is $199, but for a limited time there’s a $150 discount, meaning we can gain access for just $49. This price includes three special reports, including the one featured here. Newly monthly issues of the newsletter, special investment insights, and more.

What is the Holy Grail of Energy?

It all circles back to the $130 trillion energy transition I briefly mentioned earlier.

This is also talked about in the last chapter of Nomi’s book – The Great Distortion. As you can probably guess by now, this all has to do with the transition away from fossil fuels like coal, oil, and gas to renewable sources like hydro, geothermal, solar, and wind power.

Personally, I believe we’ll be using fossil fuels for the rest of my life. But there’s no denying that massive injections of capital, like what is happening right now in the energy sector can distort markets.

However, renewable energy is impossible without massive batteries that can:

It may be the single biggest limitation holding back the transition to renewable energy.

Liquid Energy or Iron Flow Batteries proport to be the solution. These batteries circulate liquid electrolytes to charge and discharge electrons via a process called a redox reaction. More importantly, they are inherently safe, run longer, and have more energy storage capacity, while costing less than their lithium-ion counterparts.

In short, being able to transform cheap and abundant natural resources like lead and water, which are found in iron flow batteries, into almost unlimited energy is the holy grail of energy.

Nomi thinks one $4 company could derail Tesla’s plans and dominate the future of energy storage. Let’s find out what it is.

Nomi drops precious few hints about what her pick could be:

Following the money led us directly to ESS Tech Inc. (NYSE: GWH). It matches up with the info Nomi provided:

The Company that Will Thwart Tesla?

In the interest of full disclosure, so-called Liquid Energy batteries are NOT better in every way.

For starters, they can’t deliver a massive amount of energy quickly. And they are a lot heavier. This is why they can’t be used in cars or cell phones, as they can’t accelerate a car fast enough. And they are just too heavy to carry around. So there is a future for the lithium-ion battery as well.

But because open batteries do not need to be small or light, they don’t require the complex engineering that goes into lithium-ion batteries.

From my standpoint, the market needs both lithium-ion batteries and batteries like ESS’ which are cleaner, cheaper, and have greater storage capacity. So the marketing in this presentation is a little misleading, as both can thrive as the demand for energy accelerates.

Are Iron Flow Chemistry batteries the future of energy storage or is there a better solution out there? Let us know what you think in the comment section below.