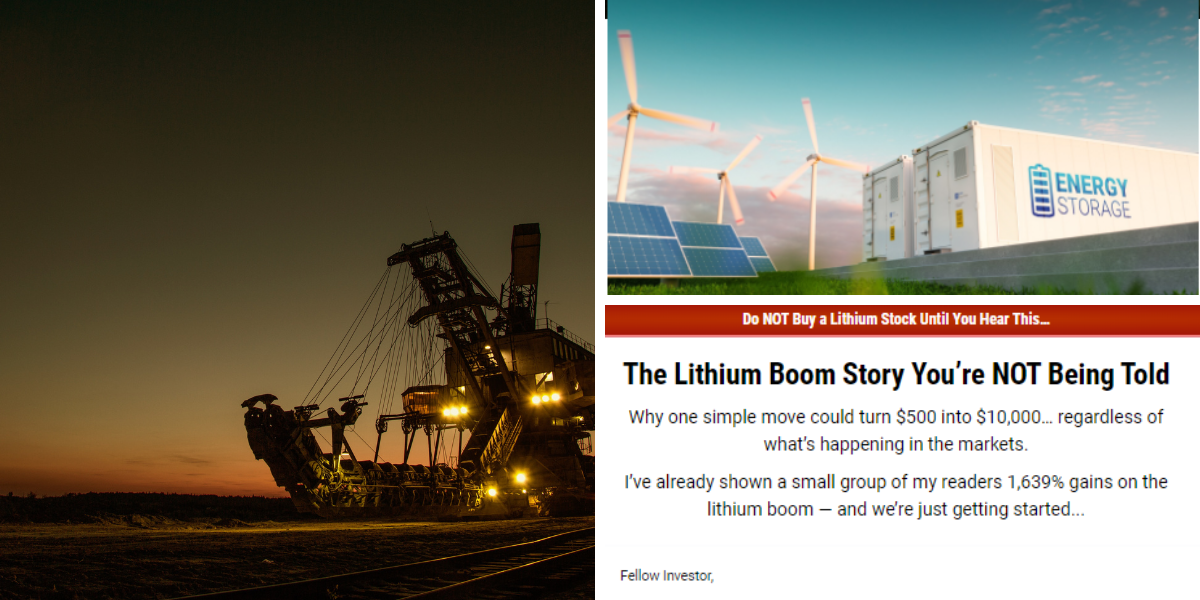 Nick Hodge believes there’s a side to the lithium boom story that we’re not being told.

There’s a boom coming in the American lithium industry and there’s one and only one play to capture the biggest gains – a $2 lithium mining stock that could deliver triple-digit gains just a short time from now.

White petroleum or lithium is promising to power the future, meeting no less than 70% of tomorrow’s energy needs.

Nick Hodge is the Co-founder of Digest Publishing and Publisher of the Foundational Profits newsletter. His focus lies in the energy and resource sectors and we have reviewed some of his past teasers in this space, including his #1 Gold Stock and “Amazon of Energy” Stock, among others.

It’s also a worst-kept secret that demand for lithium is hitting record highs.

Market forces are in place for this run-up to continue.

As you’ve likely seen in the news recently, California passed new vehicle requirements that will ban all sales of new gas-powered vehicles by 2035. They’ve also set a target to be 35% electric by 2026.

They’re not the only ones either, with 14 more states proposing similar requirements, including Washington, Oregon, Massachusetts, New York, and New Jersey. The US Department of Energy has even organized a task force to help these states make the switch and has sweetened the pot with incentives for states and consumers alike.

With the writing on the wall about where the market is heading, every major car manufacturer from Tesla to GM and Mercedes is trying to source lithium, all at once.

There is No New Battery Savior

We’ve all occasionally seen and I have even reviewed splashy headlines that tease a “new” battery metal that’ll make lithium obsolete.

Nick says we shouldn’t buy into the hype.

While innovation will certainly continue, as it always does, there is nothing that will take lithium’s place for the next decade and possibly even beyond that.

This is especially true for an industry that’s now manufacturing six million cars a year (and is hoping to scale to 5x this figure by 2025). There’s simply no changing course now.

Silicon Valley can’t engineer its way out of this problem.  They’re going to have to mine their way out of it and that’s where Nick’s $2 mining play comes in.

Nick gives his insider take on this company’s projects all across North America and its plan to capitalize on the coming lithium boom in a special report: Lithium Boom Profits.

This comes with a subscription to the Foundational Profits newsletter for $199. Included are two bonus reports, 12 monthly issues of the newsletter, 24/7 access to a model portfolio, and more.

The Hunt for Lithium is On

It has been said that “lithium is an element that is at once everywhere and nowhere.” It can be found on every major continent in abundance.

But economic sources are surprisingly sparse.

This has rightly raised doubts that it will be able to support all the electric car production that is planned. After all, the price of lithium has gone from $5,000 per tonne in 2010 to above $75,000 today!

It may only be the start, as EV sales are growing at such a breakneck pace that lithium prices could even double from there.

Made in America to the Rescue

It wasn’t all that long ago when many North American lithium projects were being outbid by foreign competition and shuttered before the drills could even break ground.

This is no longer the case.

Major car manufacturers can’t seem to find enough batteries to buy. So many companies, including newcomers to the EV market, like Ford and Jeep, have decided to build their own. Jeep recently partnered with Samsung to build batteries in Indiana.

As another example, Mercedes has just broken ground on a new billion-dollar battery production plant in Bibb County, Alabama. The plant will soon provide batteries for its North American vehicles.

In short, all the big players are throwing everything they’ve got at securing the materials they need to keep their EV cash cows well-fed.

American lithium is making a dramatic comeback and Nick’s $2 firm is already ahead of the game in this respect. With drills activating some of the richest lithium ground he’s ever seen.

Revealing the $2 Mining Stock for the Lithium Boom

Nick drops some useful clues about his top pick throughout the presentation.

This appears to be Critical Elements Lithium Corporation (OTC: CRECF). Here are a few reasons why:

A Surefire way to get Rich With Lithium?

Lithium has a lot going for it, from automakers building out their own supply chains to government subsidies and tax credits.

This momentum is going to lift a lot of boats, including that of Critical Elements.

Its first project, Rose, which has now received both federal and provincial rubber stamps, features high-purity spodumene. This mineral is typically found in lithium-rich pegmatites.

So there is some substance behind the hype here. As is typically the case with early-stage miners, dilution is a concern and Critical Elements doesn’t do anything to alleviate these fears. With plenty of options and warrants outstanding.

On the other hand, the company does have seasoned developers and mine operators with experience in de-risking large-scale projects from the point of discovery through to production. A bit of dilution, in this case, may just be the cost of doing business.

There’s no doubt that Critical Element’s exploration upside could send its shares rocketing, but this remains a speculative play at this juncture.

Will America become a lithium production powerhouse? Tell us what you think in the comment section below.