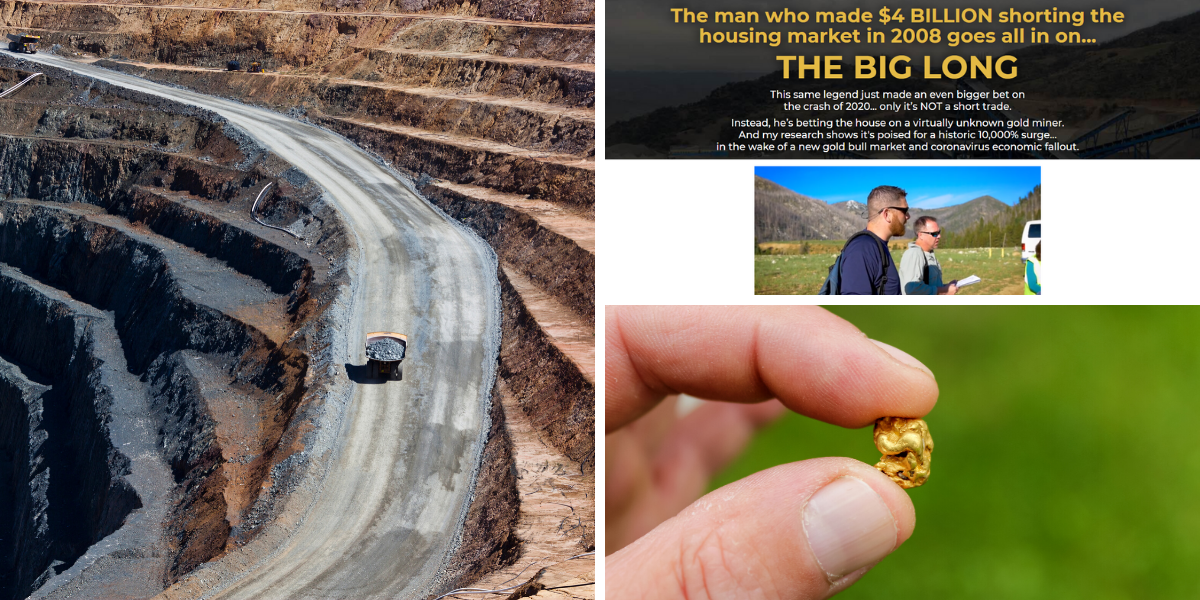 Nick Hodge over at the Outsider Club has been teasing a gold miner stock that he thinks could soar as much as 10,000%, which is insane if you think about it.

Is this legit? Is this investment opportunity really that great?

In this short review I'll be going over what's really going on here and I'll expose the name of the company he's teasing... all for free. You can thank me later.

Their might be different versions of teasers out there for this opportunity, but this is what I came across... 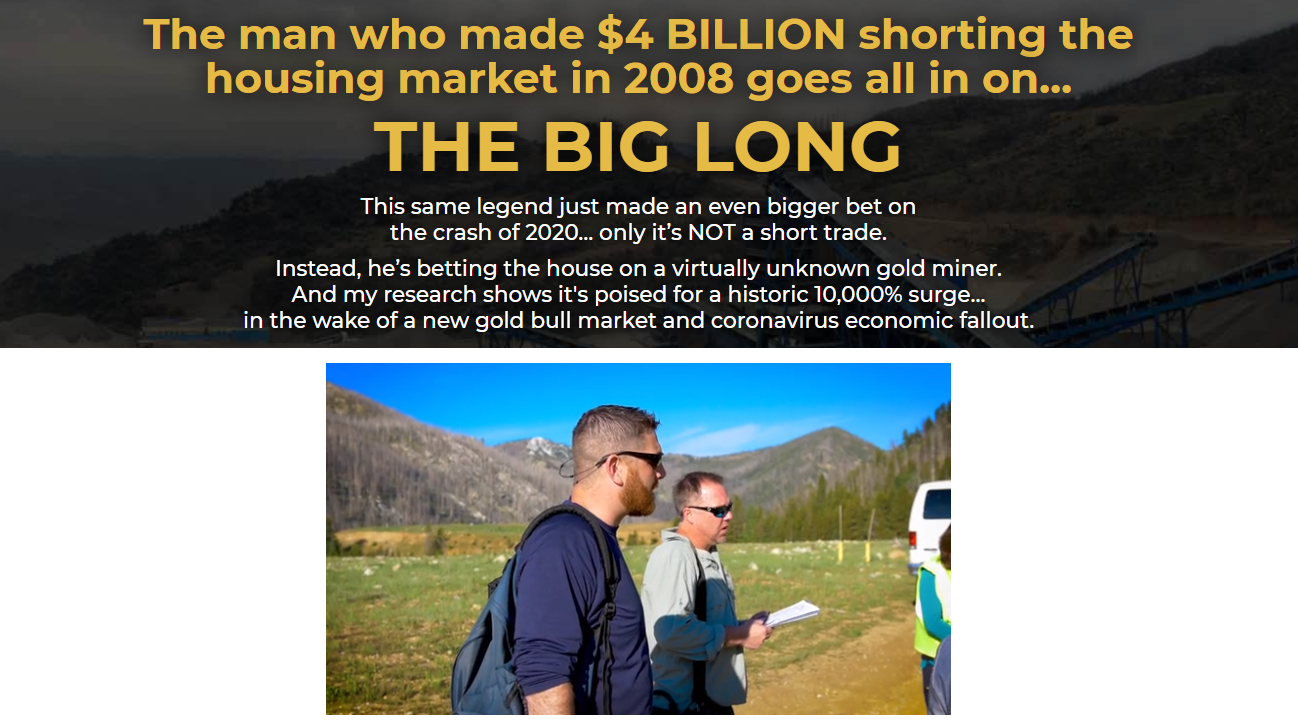 Nick Hodge is the guy behind it all. He's the president and founder of Outsider Club. Nick has helped co-author two best-selling investment books, has made appearances different media outlets for his investment expertise, and is a boots-on-the-ground type of guy, often traveling to far-off locations to get frontline information on companies before investing in them. But his main job now is running various investment newsletter services through his Outsider Club company, in which he alerts subscribers to investment opportunties and helps guide them along.

Nick has a decent background and has had some really good past recommendations that have provided subscribers with nice profits. HOWEVER, his teasers can get a bit carried away, and you have to take some of what he says with a grain of salt, just like his ridiculous "crypto 66" teaser that's been floating around..

This new opportunity to invest in some gold miner company he claims is the best opportunity he has ever come across.

He goes on to say that "it's the best opportunity you'll ever have to make life-changing 10,000% gains in the next few years"... and he even talks about how investors will be able to retire early "with more money than you'll know what to do with".

Oh boy! More money than I would know what to do with??? Traveling around the world???... Snap out of it! 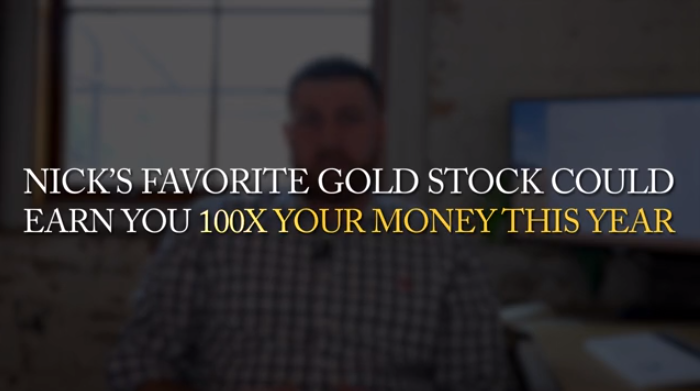 At first I thought this might have been a slip of the tongue, but later he repeated, in different words, that "it's poised for a historic 10,000% surge".

Not only that, but Hodge claims that "these gains may actually be a conservative estimate of what's coming".

At this point I was thinking hallelujah! I don't know about you, but 100X gains just aren't enough for me.

But in all seriousness, this has to be one of the most hyped-up investment teasers I have ever come across.

Saying that 10,000% gains could be a conservative estimate. Well... this is just crazy.

And not only that, but in the teaser he also tells viewers to imagine buying another house, taking a vacation around the world, and never having to work again.

Sounds like a get rich quick scheme in a way... and of course it all ends in a sales pitch...

All of the details on the "tiny company" Nick Hodge is teasing are provided in a "free" report titled 10,000% Gains on America's Biggest Gold Mine... 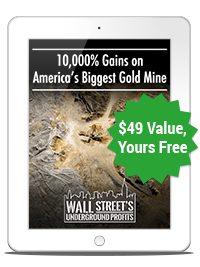 Now this report is said to be "totally free of charge". However, in order to get a copy of it you'll have to subscribe to his investment newsletter service called Wall Street's Underground Profits for a discounted price of $99.

But luckily for you this won't be necessary because I'm going to simply tell you the stock he's teasing in a minute.

Let's first talk about the opportunity being teased here though...

This entire opportunity is centered around some massive gold mine that Hodge claims nobody knows about except for him, John Paulson, and viewers of his presentation... and we are told that there is one single company that sits on this mine.

John Paulson, for those who don't know, is a billionaire hedge fund manager who leads his Paulson & Co. company that he founded. He's very bullish on gold and is well known for this. We've come across his name before in other teasers that we've exposed here at Green Bull Research, such as the Tier 2 Gold teaser for example, and if he's investing in something then it's usually worth taking a look at.

Now what the heck does this mean?

Well, it means that the official estimates are that there is 6 million ounces of gold in the ground (actaully a bit more, as I'll talk about), but for some reason Nick Hodge is hyping up the opportunity saying there is probably 20 million ounces... which is a number he seems to be pulling out of the sky.

As was stated, there is "three times more gold than the official reports say"... according to him.

So it's not officially the biggest gold mine in the US, but if there does actually turn out to be 20 million ounces of gold like Nick Hodge predicts, then it will be.

Hodge thinks the company is keeping its estimates low on purpose because this means less paperwork and less regulatory hassle to get the mine approved... but I have found no proof of this. Then again... he has a lot more inside information on the deal than I do.

Why he thinks this stock will explode in price..

In the presentation Nick talks about how you have to buy shares of this company now before this information goes public, which he says will be happening soon. The idea he has in mind is that a bunch of bigger gold mining companies will start a bidding war to buy-out this company, which will send the stock price soaring.

This is all speculation at the moment, but that's not to say it couldn't happen.

And now on to what the stock is that's being teased... what you've been dying to hear...

So, what is the gold miner stock that's supposedly going to make you rich beyond your wildest dreams?

What's the stock that, as Nick Hodge puts it, is "the best opportunity you'll ever have to make life-changing 10,000% gains in the next few years"?

Well, let's take a look at some of the clues we were given in the teaser. What we know is that...

Any guesses on what the company is he's teasing?

Unfortunately, due to the lack of clues... I wasn't able to... KIDDING... the company he's teasing here is Midas Gold Corp (MDRPF). This is his "#1 Gold Stock".

The clues match up nicely. Midas Gold has control over the Stibnite Gold Project, which is located in the area in Idaho that Nick was talking about. This mine was a large producer of Antimony in the 1900's and the EPA does have a Superfund set up to help clean-up the environment in the area due to destruction from the past mining activities... one of the main duties being to help restore a healthy trout population, which had been hurt by the irresponsible previous mining activities and the heavy metals that were released into their waterways.

The latest projection I've heard was that there has been estimated slightly over 6 million ounces of gold in the area, but of course Nick Hodge predicts 20 million ounces... which is a number that might be coming from fantasyland. The gold, as was mentioned, is an unusually high grade, and it's an open pit mine. High-grade gold, open pit mine, lot's of it... this could be highly profitable. And apparently John Paulson believes so too because he just invested $35 million in the company.

Midas Gold it is, no question about that, but is this really the big play he hypes it up to be?

100X Gains or Not Worth Your Time?

The first thing you should know is that Nick Hodge has actually been teasing this stock for years now... since at least 2018 from what I've been able to find.

And back then he was telling everyone that they have to get in right now if they want to make a fortune. Well, now he's saying it all over again... saying you must get in right now for those 100X gains.

However, this time around there might be more promise.

In the teaser he kept mentioning that there was some big event coming up that would send this company's stock price soaring. What he's probably talking about is it's Stibnite Project public review, which is set for August 2020.

This will make their operations more widely known and will likely drive up the stock price... and already has. You won't be able to get in for just $0.50 anymore (the teaser is a bit outdated).

The company is solid and with this Stibnite Project it could be a good play. But please, I beg you... don't expect to 100X your money. You will just be setting yourself up for disappointment.

I hope this review has provided some value to you and answered your questions. As always, let us know what you think about this stock pick in the comment section below. We like to hear back from our readers!