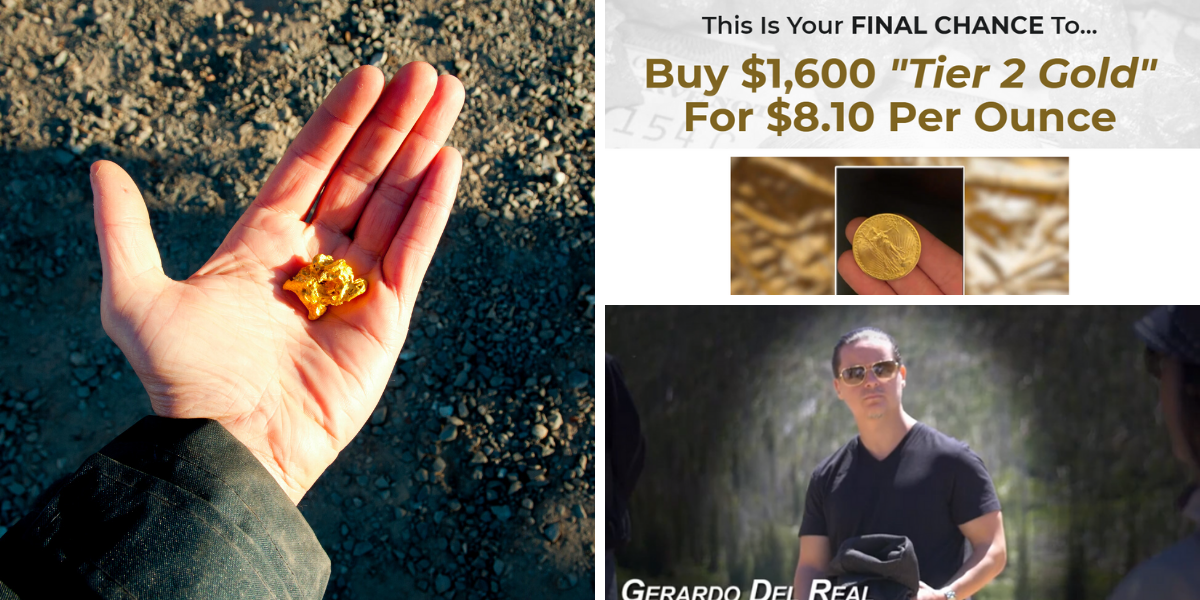 Gerardo Del Real from the Outsider Club has been teasing an opportunity that he calls "Tier 2 Gold", but what the heck is this and is it legit?

In this quick review I'll be going what exactly he's talking about here and exposing a few stocks he's teasing.

Let's begin with the teaser... 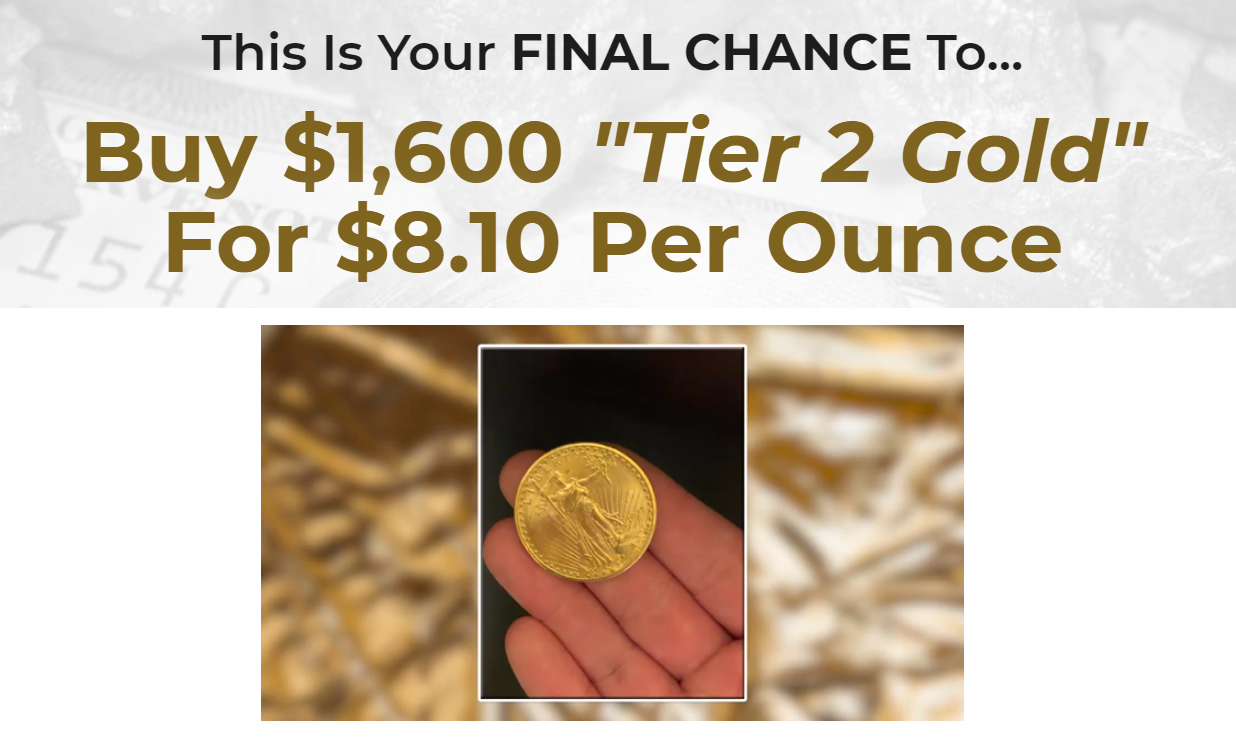 Gerardo Del Real is the guy behind it all. He's an advisor in the natural resources sector and has supposedly provided investment advice to large institutional players, fund managers, etc., but now spends much of his time running investment newsletter services to the general public through the Outsider Club publishing company - similar to the geologist over at the Banyan Hill Publishing company who's behind the "Magic Metal" and "Anti-Element" teasers.

In the teaser he claims that this "Tier 2 Gold" one of his "most closely guarded secrets", and is something that industry insiders and billionaires are already getting in on.

At the very beginning of his hyped-up presentation, he shows a gold coin and mentions that it costs over $1,600 per ounce, and then claims that you "could buy ounces of gold exactly like it for just $8.10".

Really? Gold for just $8.10 an ounce? It sounds too good to be true, and this is because it isn't what you think... very misleading as usual.

What he tells us is that this opportunity comes from a "little-known industry loophole", and that you can buy "Tier 2 Gold" for as little as $12 per ounce (definitely not a loophole).

Not only that, but Del Real is confident that this is an opportunity to turn a $10k investment into "at least" $100k... 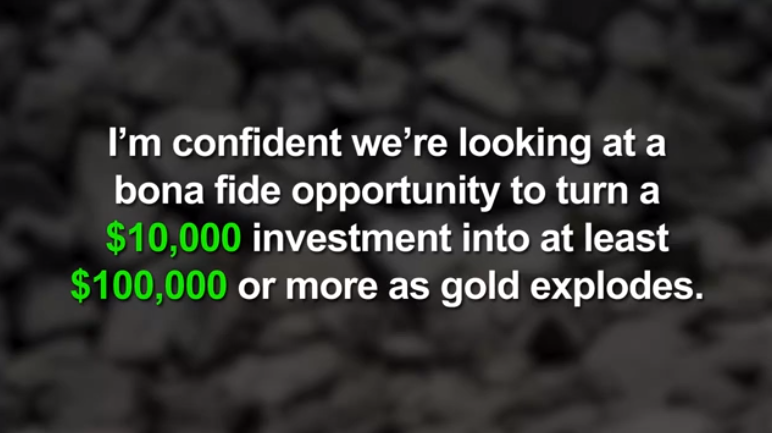 But how do I get my hands on this stuff?

Well, we're told that "Tier 2 Gold" is supposed to be kept locked up and that "theoretically you can't buy it", but there is supposedly some new loophole to get in.

However, there is said to be a narrow window of time to get in on this.

Del Real thinks "gold prices could spike to at least $5,000/oz.", and he believes this will come from a big crisis predicted to be coming, mainly due to the negative interest rate policy that the EU has.

If you were able to make it through the agonizingly long-winded teaser, then you already know it ended in a sales pitch.

You see, Del Real goes over exactly how you can invest in this "Tier 2 Gold" in a "free" report he's giving out... 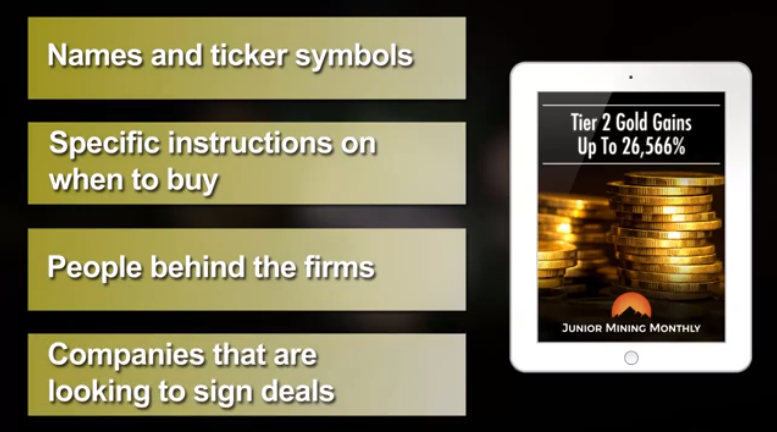 Now how do you get your hands on this "free" report? Well, of course you have to take out your credit card and pay to join his subscription advisory service.

We're told it comes from secret gold reserves, that it's secured in deep vaults around the world, and that it is harder to access than bank vaults and whatnot.

After a while, he finally get's around to telling us that "Tier 2 Gold represents the thousands of tonnes of proven gold reserves sitting undeveloped around the world".

Tier 2 Gold just represents the un-mined gold that remains in the earth, and that $8.10/oz he was teasing was just for investing in some mining project in Bali, which he briefly mentioned.

Now how do you get your hands on some of this un-mined Tier 2 gold?

Well, that's where the opportunity comes in. Del Real teases 3 different junior gold mining projects that he things will provide investors with huge returns, and it is the names of these companies that he reveals in his "free" report. 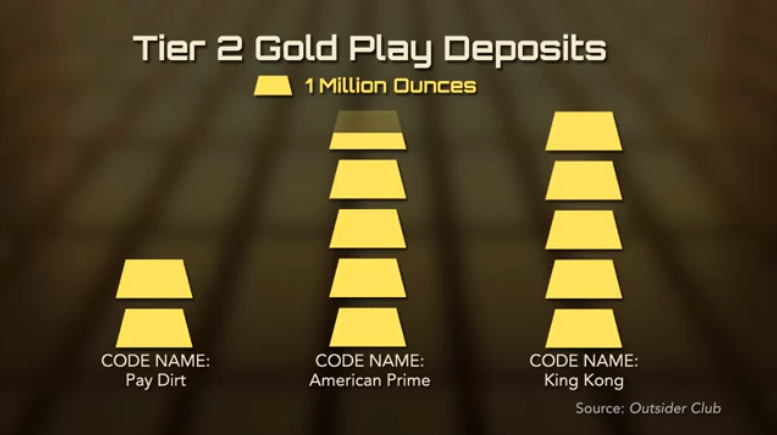 There are 3 gold plays total.

His first play is an Idaho project that he mentions is an old mine that was closed down when gold prices dropped to $300 in 2000, but has since reopened and is sitting on a 3 million oz. deposit.

Del Real goes on to mention that investing in this company is like "buying this Tier 2 Gold for $17 an ounce", but I have no idea what this is supposed to mean.

Anyhow, the company he's teasing here is Revival Gold (RVG.V in Canada, RVLGF OTC in the US).

Revival Gold has since aquired project called Beartrack, which is what Del Real was talking about. The Beartrack mine is located in Lemhi County, Idaho, which was mined by the Meridian Beartrack company from 1994 until 2000 when the price of gold went below $300.

Play #2 is said to sit on top of 4.4 million oz. of gold somewhere in Mexico, and we know that it has a $60 million market cap. Furthermore, it's stated that investing in this company is like "buying this stock is like picking up gold at $13.60/oz.", but again, I don't really know what he's talking about when he says this.

Unfortunately I'm at a dead-end when it comes to what this stock is. There are hardly any clues given and I haven't been able to find a match.

*IF YOU KNOW WHAT THIS STOCK IS, LET US KNOW IN THE COMMENT SECTION BELOW. Here's a list of mining projects in Mexico.

Update: This might be Almaden Minerals (AAU), as a reader pointed out in the comment section. Their market cap is right around $60 million, as mentioned, and they do have projects in Mexico. I'm not sure where the "4.4 million oz." or gold comes from that is mentioned, but it is a likely match.

And lastly, there is the company sitting on 6.6 million oz. (and growing) of "Tier 2 Gold" that Del Real refers to as "King Kong".

Now this has to be good to go by a name like that.. After all, King Kong was big and bad enough to have defeated Godzilla back in 1962.

Some of the clues given on this company include that its stock trades at under $1.00 a share and that billionaire hedge-fund manager John Paulson took a big position in this company.

These clues point to it being Midas Gold (MAX.TO, MDRPF), which has shares that do indeed trade for less than $1 (both MAX.TO and MDRPF), and Paulson invested $35 million in this company back in March 2020.

Not many people will argue with gold being a good investment. Sure, prices can be volatile in the short-term, but it's something that has maintained value long-term, and is a good place to put your money if you think that economic doom is imminent, as Del Real does.

However, we're talking about investing in stocks here, not gold. That said, if gold prices do soar like predicted, these companies are pretty much certain to rise alongside. Revival Gold is sitting on a large gold reserve and so is Midas Gold, so both could see stock prices rise and operations pick up if the price of gold does increase.

But that's just the thing... IF the price of gold increases. This is what much of the success of junior mining operations like these are dependent on, obviously.

I know Del Real makes it sound like some fact, some guaranteed outcome, that Gold is going to $5k+ an ounce... and he makes some very good points, but no one can predict the future like this and guys like him are well-known to make bold claims that don't materialize.

Remember, he's trying to get people to buy into his advisory service.

And that's it. I hope this review has provided some value to you!

Let us know what you think of these picks down below, and be sure to comment your thoughts as to what the unknown pick might be!