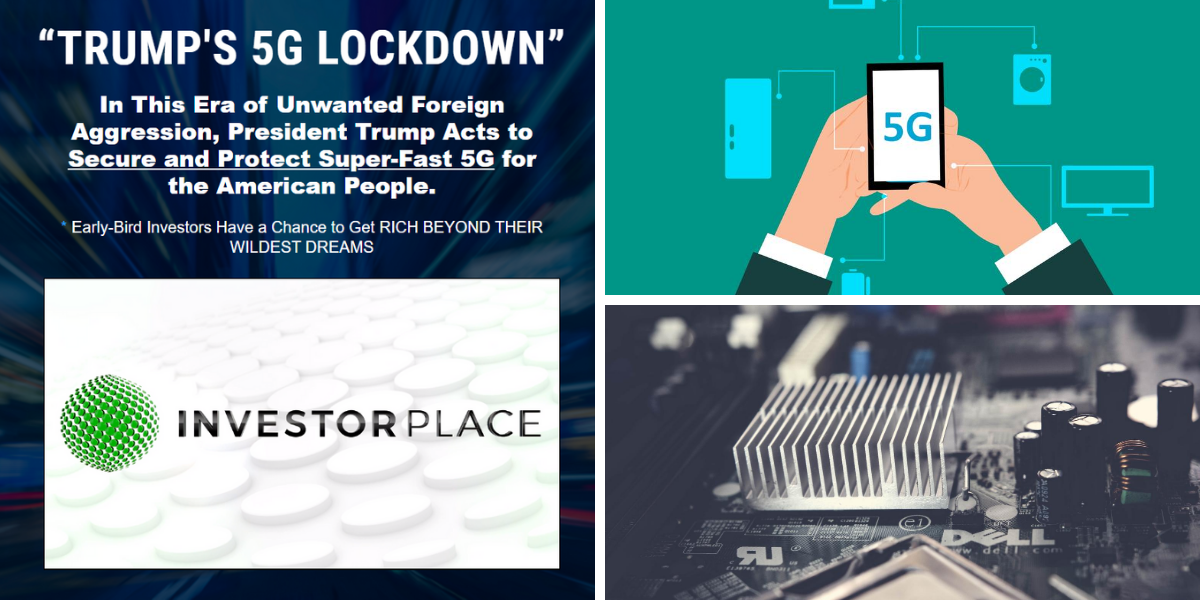 Today we have a new investment proposition from the self-proclaimed “legendary investor” Louis Navellier, in which he teases a company whose stock “could explode by as much as 3,972%… 12,815%…even 24,221% over time”. How would you like to turn an initial investment of $5,000 into a trust fund that will help you retire peacefully and allow you to afford a more than comfortable lifestyle in just a few years?

The title of Navellier’s latest teaser is “Trump’s 5G Lockdown” which, you guessed correctly, teases about investing in one of the most promising markets, 5G technology. The letter starts with the news of Trump signing “a radical new law called the 5G Act” on March 24, 2020. 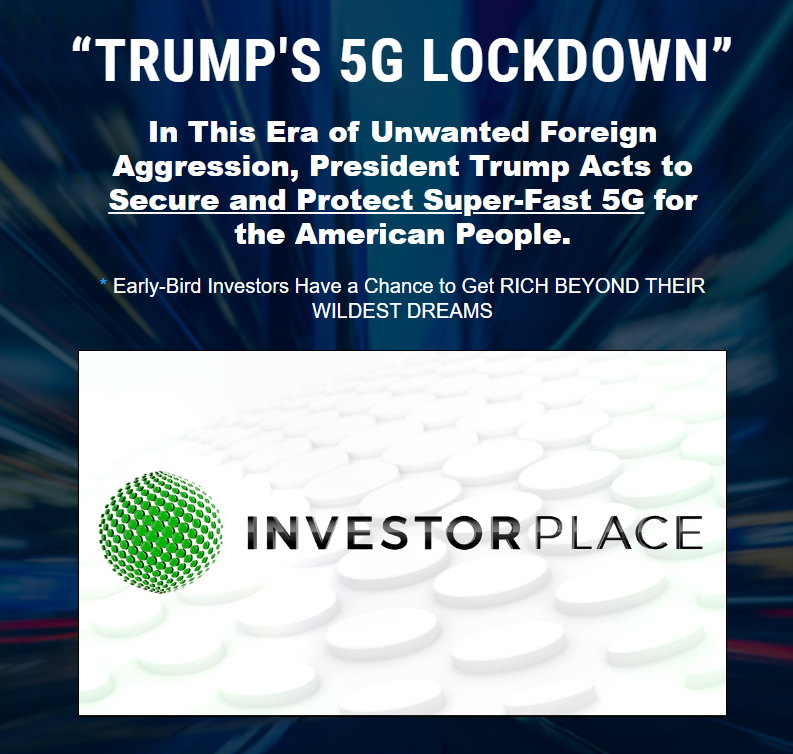 According to the POTUS, the “5G network needs to be made in the U.S.A.”, which is why Navellier believes that American-based startups as well as bigger companies in the field will benefit from huge momentum that will help them grow and, alongside them, make hundreds of thousands of investors happy.

Louis Navellier will unveil the name of this potentially huge 5G company if you agree to sign up to his annual newsletter, “The Growth Investor”, for $49. For this money, you will receive three special reports, including “The Netflix of 5G Stocks”, 12 monthly issues, urgent position updates, and other tips on when and where to invest your money.

Luckily, based on all the information he provided in Trump’s 5G Lockdown teaser, we were able to uncover the name of the company he promotes, and you’ll get it for free, right here in this article. But first, let’s take a look at who Louis Navellier is and why you should care about his predictions.

Who is Louis Navellier?

Navellier is the Chairman and Founder of Navellier & Associates which purportedly manages $2.5 billion in assets. He also writes 4 investment newsletters focused on growth investing, including Quantum Growth and Blue Chip Growth, and can be frequently seen on TV as a talking head on CNBC, Bloomberg, and Fox News.

With over 30 years of experience in the investment field and a known figure on Wall Street, Louis Navellier employs a three-step, highly disciplined, bottom-up stock selection process and mainly focuses on quantitative analysis and fundamental analysis of the securities selected for his portfolio.

Navellier also launched an exchange-traded fund (ETF) in 2009 but it under-performed the stock market, partially due to the economic crisis at the time, and was liquidated in 2016.

As we previously mentioned, Navellier is pitching us an opportunity in the heavily touted 5G sector, in which we have already reviewed plenty of opportunities: 5G Apple supplier stock and Perfect 5G Stock Exposed.

Although the intentions here may be noble and there is certainly enough energy and analysis put into pitching such companies, people shouldn’t forget that 5G stocks are inherently volatile and the market isn’t mature enough as yet, which means there is plenty of speculation abounding about which companies will ultimately survive over the long-term. Sometimes, such fervor and speculation can help you earn a small fortune in a matter of weeks or months, but other times (most times) you may end up investing your money in stocks that don’t amount to much.

Many private investors and “financial gurus”, including Navellier, Teeka Tiwari, Jeff Brown, Chris Wood, Tim Bohen, and Koyfman have predicted that 5G will become a game-changer, and that with all the new regulations and laws passed recently, we are going to experience a new tech revolution.

In his letter, Navellier mentions that “5G will dominate the market by 2023”, so you should “get invested now, while close to 100% of the massive profit is still available”.

Many global telecommunication companies, including AT&T, T-Mobile, and Vodafone will provide or are already offering a 5G connection to their subscribers, in limited areas. However, for the technology to deliver high Internet speeds and, ultimately become “The Internet of things” and realize its full potential, it needs investment in additional tech to support the speed.

Navellier teases a “turbo boost” stock but he doesn’t necessarily talk about chip makers, like other financial experts. Rather he pitches a company that produces chip making equipment.

As we previously mentioned, Navellier provided enough information in his marketing teaser so that we could expose the company he was talking about. Lets review:

The company being teased here is none other than KLA Corp. (NASDAQ: KLAC) whose shares did in fact surge from around $115 in March 2020 to nearly $180 in July, shown by a small chart in the teaser, which helped us easily identify it as KLA.

Although KLA doesn’t make the “smart antenna” or the “turbo button”, it helps other companies to develop, test, and manufacture new technologies and chips, which makes them “the backstage” player of the 5G industry.

KLA’s CEO is Rick Wallace, and the company provides a wide series of solutions from capital equipment to process controls for the semiconductor energy.  It is currently in rapid expansion mode, announcing a second headquarters in Ann Arbor, Michigan and 500-600 new hires, around 50% of whom will be engineers.

As we previously mentioned, American-based tech companies in the 5G sector have benefited from serious domestic support due to the current trade war between the US and China, especially push back against Chinese telecom giant Huawei. As a result, companies like KLA have emerged and received substantial contracts from giant tech corporations like Amazon, Apple, Microsoft, and IBM to review systems and detect defects, provide meteorology solutions, monitor products, provide computational lithography software, and data analytics systems.

Is KLA Stock a Buy?

Like many before him, Navellier relies on the technology’s momentum, talking about “accelerating earnings, cash flow and return on equity”, predicting an increase of up to $25 per share “in the upcoming weeks”.

In comparison to other companies in its field, including Applied Materials (AMAT) and LAM Research (LRCX), KLAC’s early growth rate and return on equity doesn’t lag too far behind. Currently, KAC pays a 1.8% dividend as opposed to LRCX, which offers a slightly lower 1.25%. However, both companies have more than doubled their respective dividends in the past three years.

Since one of the first rules of investment is to never put all your eggs in one basket, you could reasonably construct a small portfolio of 5G stocks to spread the risk and possibly end up with a big winner regardless of which company(s) ultimately end up emerging as real players in the market.

KAC even seemed to weather the COVID slump and do just fine, at least according to its fourth-quarter report. In its latest 10-Q, they called the quarter “a beat and raise”, with revenues increasing by 16%, some 13% more than forecast.

Unfortunately, the market remains volatile, similar to the one in cryptocurrencies, robotics, automation, and other early-stage tech, which makes it more of a gamble than a proven investment at this point in time.

At the end of the day, KLA currently holds a strong position providing reliable semiconductor equipment and testing solutions to large multinationals, which means its growth potential is definitely there. Unlike other companies in the field that are focused more on simply developing new technologies and selling/licensing their patents, KLA seems like a company that could emerge as a large scale entity in the market over the long-term.

Have you invested in any companies in the rapidly emerging 5G field? Is KLA in a prime position in the 5G infrastructure market? Will 5G networks get fully rolled out this year or next? Let us know your thoughts in the comments.