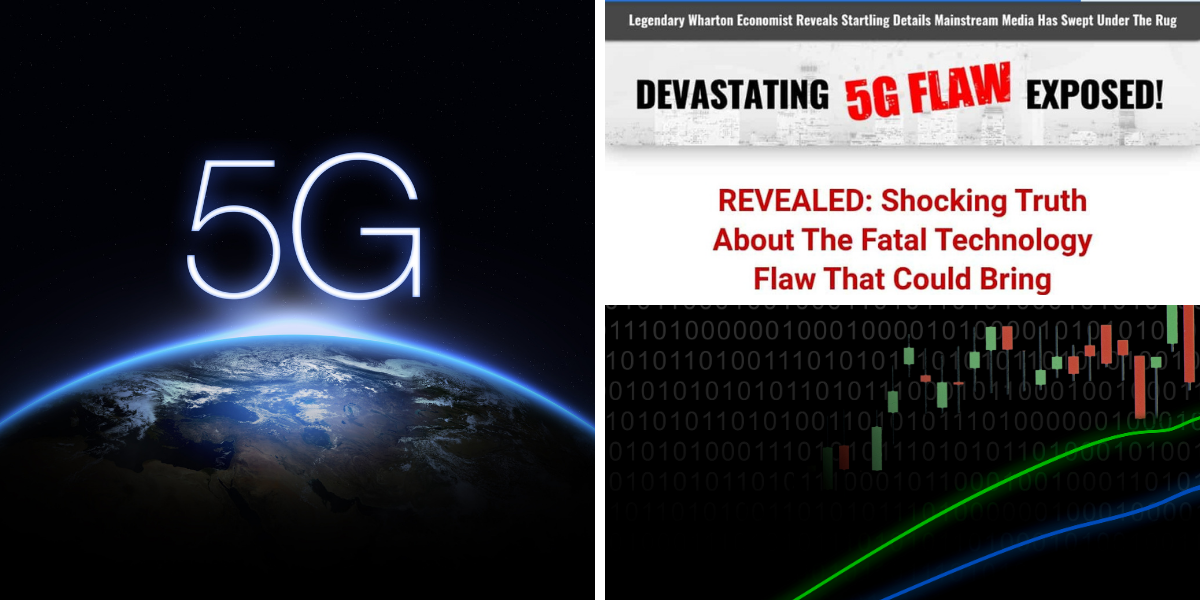 5G investment opportunities are all the rage nowadays and it seems that all the investment gurus and experts have a teaser of some sort for making big money in this newly emerging market.

Stephen Leeb's 5G stock pick is one that he thinks could make investors filthy rich... claiming it could rise up to 2,247%.

Normally you'd have to buy into his investment newsletter service in order to get the details on this company, but I'll just be telling you for free (name and ticker symbol) in a bit.

That's quite a bold claim, but nothing outrageous compared to other hyped-up 5G teasers we've come across in the past, such as the "Perfect 5G Stock" that was teased by Lou Basenese or the "Turbo Button" stock from Navellier.

Leeb's promotional approach is centered around a "devastating 5G flaw"... and the "$5 stock that could be the biggest tech opportunity of all time"... 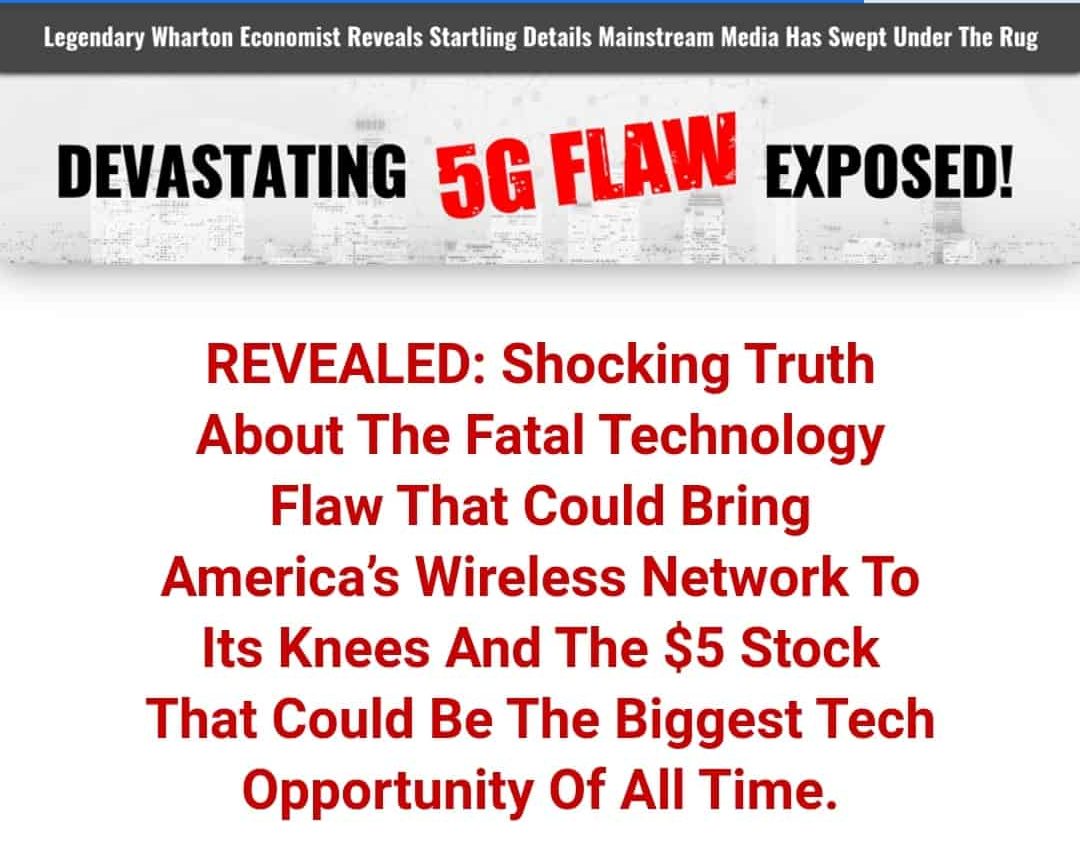 Sounds incredible, but let's go over what he's actually talking about here before getting too excited.

The Problem With 5G

5G is up to 100x faster than 4G and will be able to carry more data. Because of this, it will be essential to new technologies such as IoT and AI.

However, the one big downside 5G has is that its signals don't travel far and can't pass through solid objects.

While 4G signals can travel about 10 miles, 5G can only travel around 1,000 feet. That's pretty bad... and its signals are blocked by solid objects such as trees, windows, doors, walls, etc.

There are a bunch of companies working on a bunch of different solutions to this problem. But generally speaking, the solution is to have antennas that can transmit 5G just about everywhere. There is no way around this at the moment.

The 5G company that Leeb is teasing he claims "fixes 5G's fatal flaw", making it vital to the 5G revolution.

He teases it as a little-known company that "has single-handedly developed the solution".

Not true... but let's entertain the hype for a monent.

How good is the opportunity?

But it doesn't end there. Leeb continues to hype the heck out of this opportunity and teases the ability to become debt-free, build a new addition on your home, or even buy a new Cadillac "without a second thought".

But the reason this company will supposedly soar in price is because he predicts it will generate $6.6 billion in royalties from its 5G tech, sending its stock price to the moon.

And after all the hype... after the excitement of finding out about this opportunity starts to peak... you are hit with the fact that the only way to get more information on this company is to buy into Leeb's investment newsletter service.

The good news: You won't have to buy into anything. I'll be going over the stock he's teasing for free.

Who Is This Leeb Guy? 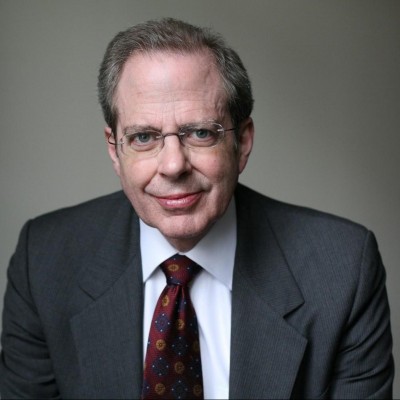 Stephen Leeb is a good salesman when he comes out with investment teasers, but this doesn't take away from his impressive background making him an authority when it comes to investing.

And besides all of this he also has authored a handful of notable books, including The Coming Economic Collapse: How You Can Thrive When Oil Costs $200 a Barrel, The Oil Factor: Protect Yourself and Profit from the Coming Energy Crisis, and others.

Leeb is the type of guy you'd want to listen to when it comes to investment advice, but is his 5G pick really any good?

Well, let's piece together the clues and see what he's teasing here.

Some of the better clues about the company that we were given include...

Other clues were given as well, but I'll keep this short and just get to the point. The company he's teasing here is certainly not little and unknown... it's Nokia (NOK), which is a name most of us are probably familiar with.

The clues match up well here.

It's a match... but is it really the amazing investment opportunity Leeb teases it as being?...

Potential to 100x Your Money?

Don't count on that!

The primary part of Nokia's business is manufacturing telecom equipment, although they also make money through licensing with their large portfolio of patents. They claim to be owed a patent licensing rate of up to $3.50 for every 5G smartphone, but these royalties are negotiable and this number certainly isn't set in stone.

The company bought out rival Alcatel Lucent in 2016 and this made them the 2nd largest telecom equipment company in the world. And although their operations in China haven't been going that well with the fierce competition, they could be positioned well due to nations that want to reduce dependence on Chinese tech, such as how Orange, a major telecom company in France, stated it would give contracts to Nokia and Ericsson, but not Huawei.

They have good things going for them, but will you really get rich investing in NOK?

Well, first off, let's make it clear that there are other companies such as Qualcomm that they'll have to compete with. Leeb makes it sound like this company is the only one with any solution to the 5G problem, but this is just good marketing... and is misleading.

Not only that, but the low stock price (around $5) doesn't mean much. Sure, it's a low price, but Nokia has a market cap of around $25 billion and has had one of around $100 billion several times. It's not some tiny company that is going to increase exponentially in size in a matter of months... far from it.

It's worth a second look, but as usual the marketing around this opportunity is over-hyped and you have to take things with a grain of salt.

You're welcome for that!

I hope this quick review has been valuable to you, which is the goal here.

As always, let us know what you think of this stock pick. Should you start looking into which Cadillac you want to purchase?