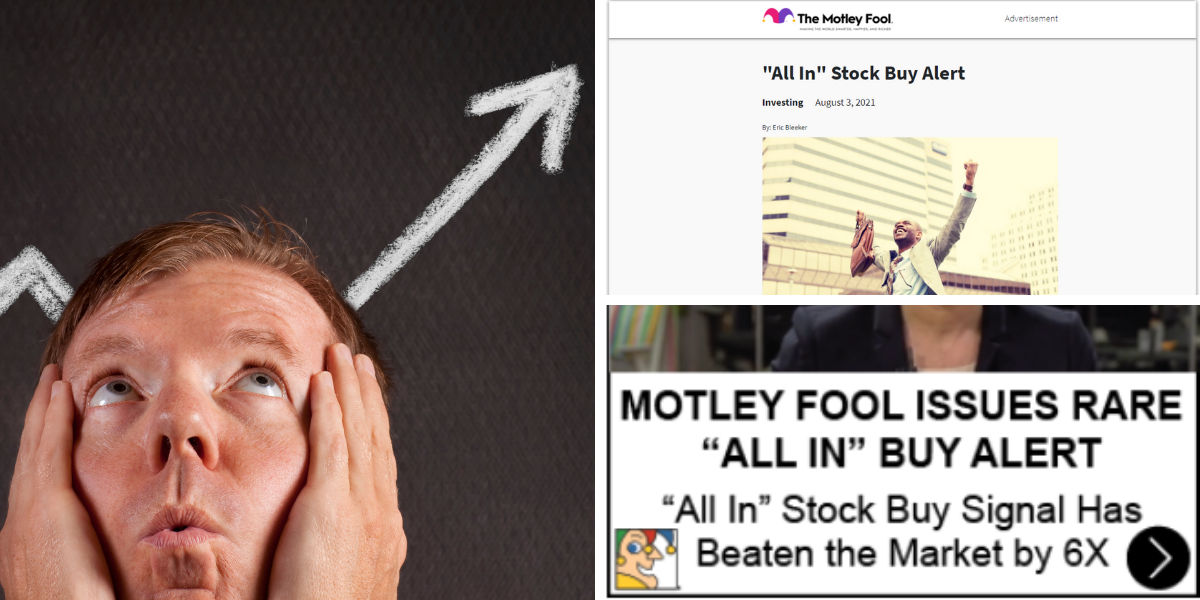 Motley Fool claims that their "all in" stock buy alerts have provided an average of well over 1,000% returns. They've only made 27 of these over the years and really push them as being something subscribers should invest in immediately.

But what are these "all in" buy alerts and what's the most recent one they won't shut up about? In this article I'll be explaining what they are and exposing this latest pick.

Chances are you've probably seen some advertisements for these opportunities somewhere. I came across this one and couldn't help but clicking. 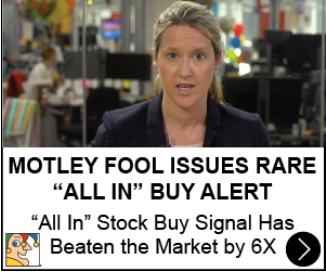 Usually you're directed to some sort of teaser page like that pictured below, where they hype up the opportunity even more and then try to get you to subscribe to Stock Advisor (their flagship advisory service), which is what you have to do if you want to learn more. 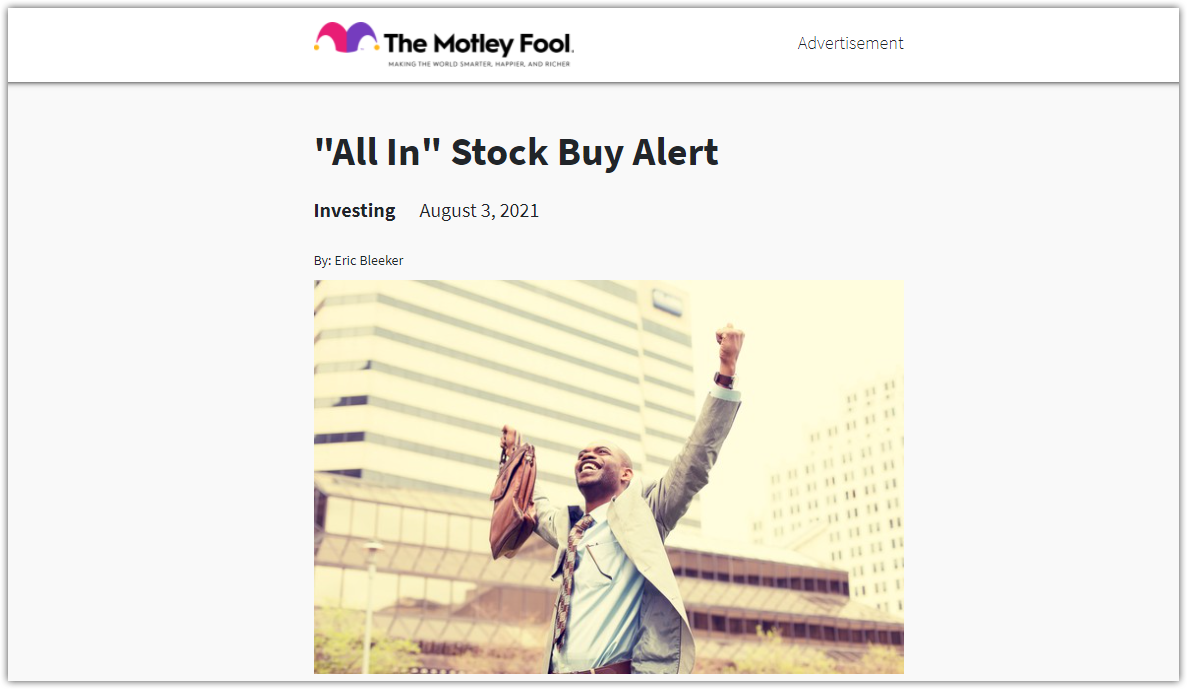 But you don't have to subscribe anymore. Like I said, I'll be exposing their latest pick for free.

What The Heck Is an "All In" Buy Alert?

These "All In" buy alerts are actually the same exact thing as what they also call their "Ultimate Buy" alerts.

To put things simply, this is when the Gardner brothers (the founders of The Motley Fool) land on the same pick, which has only happened 27 times in the history of Stock Advisor & Rule Breakers (two of their advisory services).

Here's a description from Motley Fool themselves:

"However, every so often the two of them will land on the exact same stock.

Many of us around the office have come to call this formal agreement between these two legendary investors the 'Ultimate Buy' sign."

The Motley Fool is known for their catchy lingo, and this is also the same exact thing as a "home run buy", which is a term they've used over the years in their marketing campaigns although not quite as often - same thing though.

Let's go over how this all works and why these situations are supposedly so darn special.

Tom and David Gardner, both of whom have their own Wikipedia pages by the way (pretty impressive), have their separate teams over at The Motley Fool. Both operate independently and filter through dozens upon dozens of companies each month to arrive on separate stock recommendations through a combination of funamental research and technical analysis.

The good thing is that they both have a bit different investment strategies, so when they do land on the same pick it is something at least worth taking a look at - most of the time.

Tom is more of a traditional value investor - the Warren Buffet type. He places emphasis on avoiding risk and looks for solid companies with good valuations. Here are 5 things he considers when looking for recommendations:

David looks for big winners (a little more willing to take risk than Tom). More specifically, he looks for companies developing a new market niche that have the potential for large and explosive growth. So rather than investing in companies that improve on something in an existing industry, he's looking for new niche market leaders (as it turns out, the "all in" buy stock I'll reveal in just a second is exactly this).

Here's some of his stock-picking criteria:

Note: I should also mention that with their flagship Stock Advisor service they focus more on well-known stocks that aren't going to carry huge risk. This is why it's their flagship service and they market it to beginner investors. And this is the service usually being promoted through their "all in"/"ultimate buy" alert teasers. However, according to TMF themselves, "The 27 stock occurrences refer to all recommendations inside of both Motley Fool Rule Breakers and Motley Fool Stock Advisor"... so we're not just talking about Stock Advisor here.

The Track-Record of These "All In"/"Ultimate Buy" Alerts

It makes sense that if both Tom and Dave are recommending picks separately and they happen to land on the same one, these occurences must be exceptional, and this does seem to hold true.

Some "all in"/"ultimate buy" alerts issued over the years include the following... 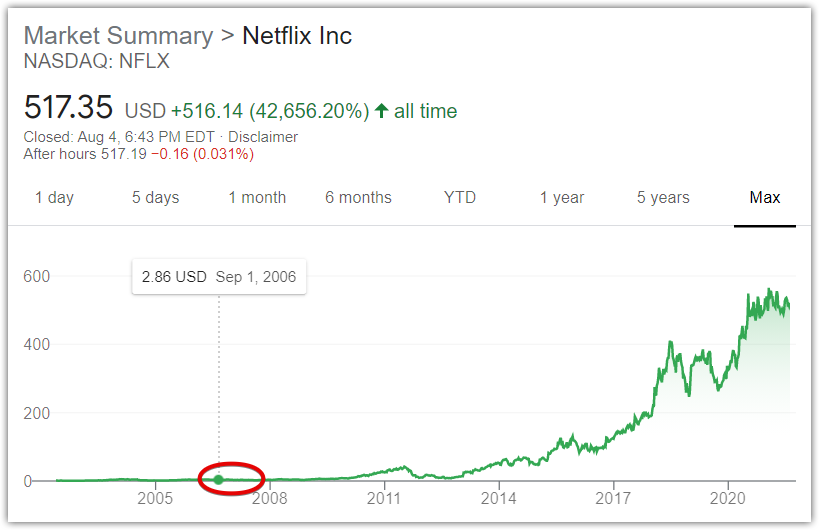 Tesla is another big winner. David first recommended the stock in December 2011 at around $6, and later in December 2012 Tom made the same recommendation when it was trading in the upper $6's. Early investors here could have profited around 12,000% at the time of me writing this. 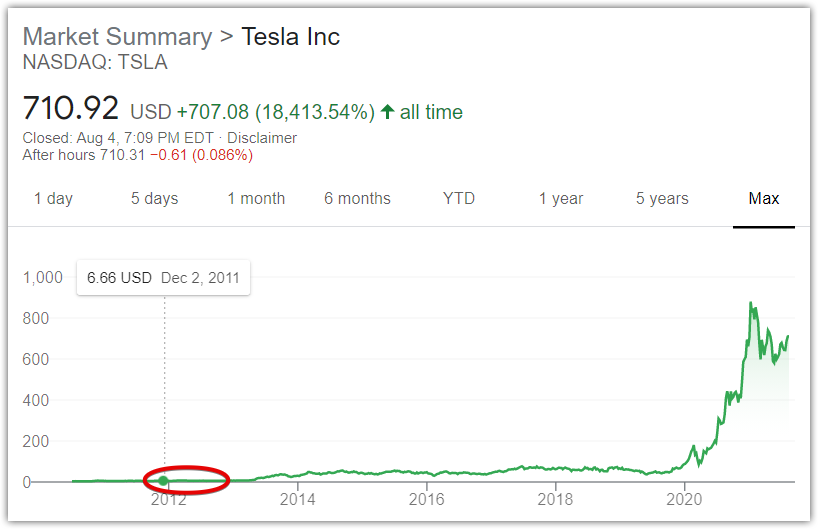 And there have been other big winners too.

And the list goes on. However, these examples, the ones they are more than happy to talk about, are of course their best examples.

You don't really hear about their losing "all in"/"ultimate buy" stocks. This is because that's, well, just not good information for them to sell as many Stock Advisor subscriptions as possible.

So while I haven't been able to find all of the specifics, it seem that their "all in" and "ultimate buy" alerts have faired pretty darn well. However, these statistics could be astronomically skewed due to big winners such as Netflix and Tesla.

Let's do some math and see how good these picks REALLY are..

At the moment of me writing this (August 2021) they have only made 27 "all in" stock buy alerts since Stock Advisor's inception.

Now we know know that Tesla, Zoom, Netflix, and The Trade Desk have all been big winners. These account for 4 out of the 27 stock picks. The average return of these 4 is around, more or less (I'm not calculating exact numbers here), 8,900%.

That's still pretty good, but again, I'm thinking there were probably some losing recommendations in that bunch. It's just that the winners were so big that the overall percentage is still great.

Exposing The Latest "All In" Stock

What's the current "all in" buy signal they won't stop talking about?

This is one they are still calling an "under the radar" pick, although they've been push it for years now and it certainly isn't a little-known stock anymore.

Some of the clues provided for this latest pick are that:

But, they've been teasing this company so long and it has grown so much over the years already that they have to keep updating this information more and more... making the opportunity to invest less and less appealing.

For example, they used to say "It’s smaller than 1/100th the size of Google", but now of course they can't do that because of how much it's grown.

Some more hints include:

"There's a tiny internet company showing this buy signal that sits in the middle of the advertising market - a market that's 10X bigger than the online streaming industry (think Netflix, Amazon Prime, Hulu)."

Think you know the answer?

This is none other than The Trade Desk (TTD) that I have already talked about above. This has also teased as the "Netflix Killer" and "cable TV's ticking time bomb", and we already exposed it here at Green Bull Research a while back. So no need to get into too much detail on why it's a match.

Don't count on it. While the company is a first mover in the new type of online advertising space it has niched out for itself, early investors have already realized significant profits. More to come? It's possible, but at the moment the stock is considered very overvalued by standard valuation metrics.

And that's all. Hopefully this information has provided some value to you!

As always, let us know what you think in the comment section below!