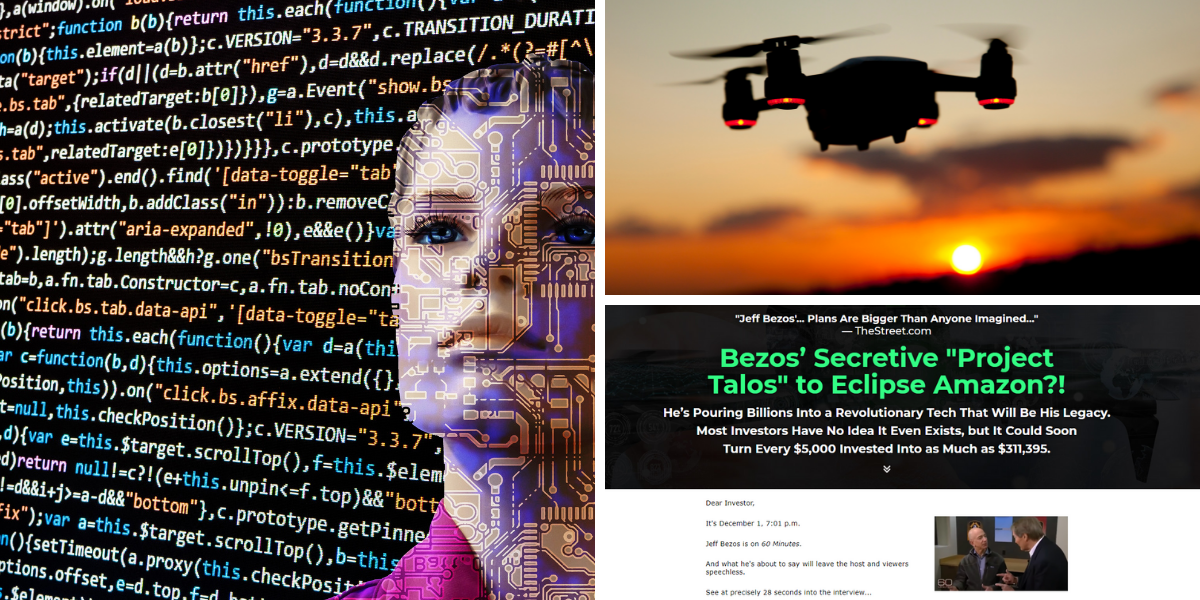 In one of his latest newsletter pitches, Angel Publishing’s Keith Kohl teases a secretive “Project Talos” that Jeff Bezos is pouring billions into and could actually eclipse Amazon itself one day.

He goes on to say that this revolutionary technology is intricately tied to the “on-demand everything” economy, where drones will deliver online orders faster and more efficiently than anything we have ever witnessed before and that this innovation could very well “turn every $5,000 invested into as much as $311,395″. Lets see if this teaser can deliver.

Kohl’s starts his presentation in rather dramatic fashion by pointing out that the founder of America’s largest online retailer will name-drop a breakthrough technology “that’s poised to fundamentally alter the way we live — and hand those in the know a potential fortune”.

Keith Kohl is the editor of the Technology and Opportunity newsletter published by Angel Publishing. The monthly publication has managed to garner over 300,000 subscribers from around the world who want to learn about the hottest investment trends today, something Keith specializes in. We have covered plenty of futuristic sounding teasers here in the past, including Paul Mampilly’s 3D Printing Stock and Jeff Brown’s “Tech Lag” Stocks.

Our author projects that this technology “is on the verge of becoming a $435 billion revolution” and will likely dominate the way we shop online in the coming decade.

Ever since the so-called pandemic struck 14 of the richest, most acclaimed companies on the planet, including the likes of Google parent Alphabet and Microsoft have massively invested in alternative ways to deliver packages to deal with the shortage of delivery drivers. As a result, the tech industry took a decades worth of research leap forward in a single year and landed in the era of robots or what Keith likes to call, the “on-demand everything era”.

According to his research, Amazon itself has already paid a whopping $1 billion to acquire tech startup Zoox, while giants like Costco, Coca-Cola, and SoftBank have all invested billions into the same technology. Keith confidently exclaims that “we’re entering the age of on-demand everything and the explosive race for this $435 billion tech has already begun”. As he puts it, “on-demand is coming for everything” and will, most likely, become ubiquitous in all sectors of the US economy.

Keith describes “six-wheeled, knee-high robots already pounding the pavement from California to New York”, in what he considers to be the biggest tech revolution since the Internet itself. He also reveals that there are three revolutionary tech companies at the forefront of this movement that “are set to bring investors huge profits”.

Keith Kohl is the lead investor and author of the Technology and Opportunity newsletter published by Angel Publishing. An annual subscription is sold for only $99 per year and includes among other special reports, 12 regular monthly issues, timely portfolio updates, flash alerts, weekly updates, a VIP customer success team, and three special reports.

These special reports include, “The Tiny Tech Firm Mass-Manufacturing LiDAR” which mentions a LiDAR company, while the second report, “Robotic Navigation: How One Company Is Enabling an Autonomous Future” teases a robotics company. Finally, the third special report, “Staking Your Claim in the Skyways of Tomorrow” reveals the name and ticker symbol of a company working on drone-delivery services, the field Keith says is all set to take off over the next couple of years.

What Exactly Is “On-Demand Everything”?

In simple terms, “flying robots that deliver packages are no longer science-fiction”. If you grew up with the Cartoon Network then you are likely familiar with the hit show “The Jetsons”. Flying cars, robots that clean your house, video calls, and smart watches were already present in the imagination of producers Hanna & Barbera in 1962, approximately six decades ahead of what we’re currently experiencing.

However, even though robots that have been able to somewhat replicate the work of regular couriers have existed for nearly a decade, certain technology that once made them inaccessible on a large scale and prevented mass production has now hit the market.

Now, flying robots can reach speeds of up to 150 mph and deliver your package in a few short hours rather than waiting two to three days. To make things even more convenient, you get regular status updates about your delivery time directly on your phone and can even choose the itinerary of your drone or ultimate drop-point.

Given such possibilities, “it’s no surprise Amazon has invested $39 billion in delivery technologies to date” and thanks to new laws being passed, there’s nothing holding such innovation back any longer. According to Kohl, “Arizona, Florida, Idaho, Michigan, Ohio, Texas, and Utah have all introduced autonomous delivery legislation”, allowing robots to take to the streets in pilot projects and deliver packages directly to people’s homes, without drivers.

However, even though such “robots have been in the development since 2013”, it wasn’t until LiDAR tech came along that they could be used on a large enough scale.

So, what exactly is LiDAR? The term refers to Light Detection and Ranging Sensor – “LiDAR is one of the most critical components of an autonomous vehicle” because it allows robots to “see” or in other words, to avoid all obstacles they might come across while delivering a package – pedestrians, cars, trees, objects, etc. However, a single LiDAR sensor can cost up to $75,000, which is why companies didn’t rush to welcome the future with open arms.

But now, one company has revolutionized LiDAR technology and lowered the costs by a staggering 99.8%, which means “this black box does it all for just $100”. 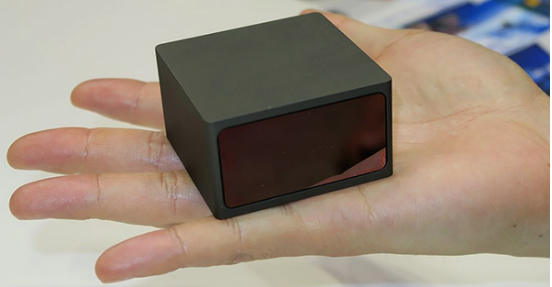 But there’s more…in addition to this tiny black box that is about to ignite “On-Demand Everything”. In Keith’s possession are three reports, each one detailing a company that will play a vital role in delivering delivery robotics and “each with the power to hand investors stunning returns as delivery robotics catapults into the mainstream”. Lets take a closer look at who some of these companies may be.

Revealing the “On-Demand Everything” Stocks

This particular teaser from Keith contains a lot of information and focuses on not just one, but three different stocks that he thinks could bring you huge profits. Here is a breakdown by special report:

The “On-Demand Everything” company in question here is KVH Industries, Inc., (Nasdaq: KVHI)

This one offered much less clues and with plenty of commercial drone delivery companies now around, we weren’t able to pinpoint the exact stock. Two out of three is still a good shooting percentage.

To answer this question honestly, it all depends on your time horizon.

If it is strictly short-term in days, weeks, and months…then no. If it is 2-5 years or more, then maybe. We say this because if we turn to VLDR and KVHI’s financials, they are both firmly in the red. But so was Amazon, Tesla, and most other innovative businesses at the same point in their growth trajectory.

There is no doubt that manufacturing robot parts and robotic navigation technology holds lots of promise, they will just take time to develop, scale, and become profitable. Which is extremely likely to happen this decade.

What do you think about an “On-Demand Everything” economy? Is it the future? Or just a transition period before something else that is perhaps unknown? Let us know what your crystal ball is telling you in the comment section below.