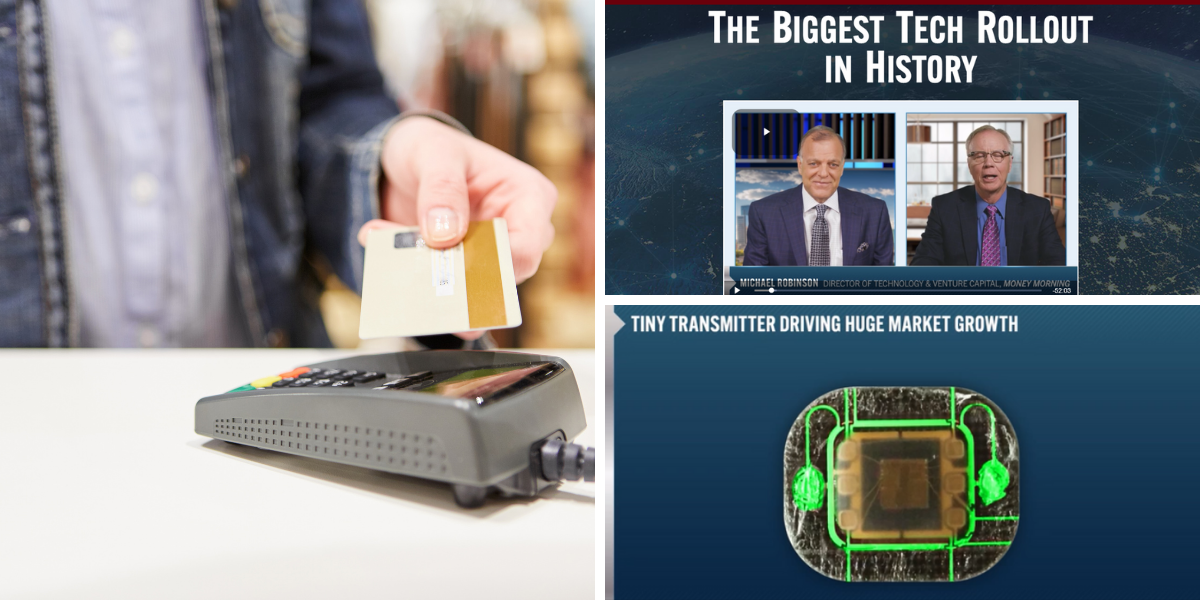 It's being called "The Biggest Tech Rollout In History" and Michael Robinson is also touting the opportunity to invest in the touchless payment revolution as a way to get rich.

Now just how rich are we talking? Well, he claims one company "could surge 1,768%" within a year... and urges you to get in right now.

You'll be happy to hear that I've just exposed the company he's teasing for free, so you can keep that wallet in your pocket and relax. Let's get to it...

The teaser presentation features Mike Ward, the founder of Money Morning, going back and forth with Michael Robinson... hyping the heck out of this new investment opportunity. 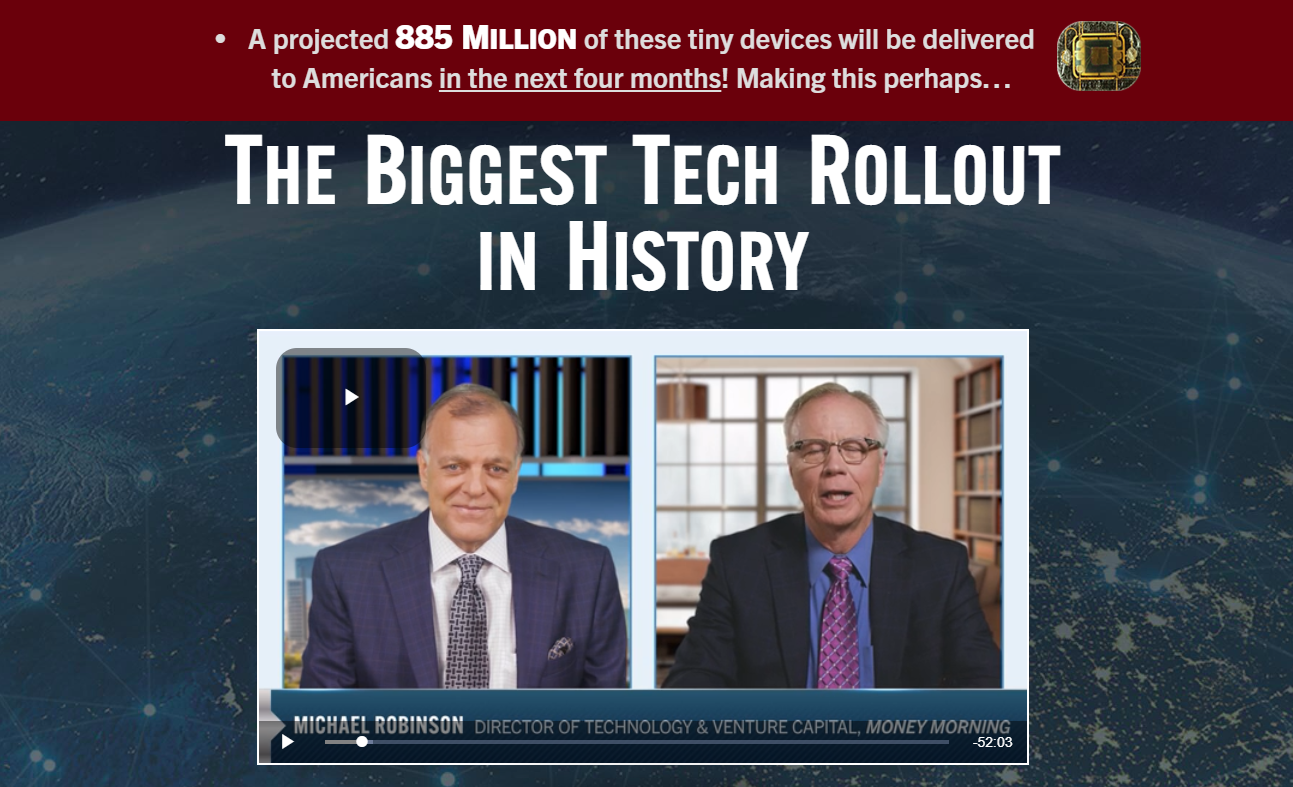 Michael Robinson is the main guy behind it all, and someone that we, here at Green Bull Research, are familiar with from other hyped-up teasers in the past, such as that for his "Super Vaccine" company. You sometimes have to take what he says with a giant grain of rock salt, but he isn't just some guy off the street selling investment advice. Robinson works as a consultant, senior adviser, and board member for Silicon Valley venture capital firms and has developed an impressive rolodex of connections that allow him to get high-level information not easily accessible, if at all, to the general public. He knows a thing or two about investing in good companies and this is why you may have seen him featured in media outlets like Fox News and CNBC as a tech and biotech analyst.

BUT, as mentioned, he's also good at hyping up opportunities to no-end... so don't get too excited just yet.

The current teaser here is about "a revolutionary new technology" that is "sweeping across America" and every customer and business will feel its impact.

We're told "it's bigger than 5G, bigger than Artificial Intelligence, video conferencing, and even online retail".

But... "it's no wider than an eraser on a pencil and as thick as four hairs on your head"... 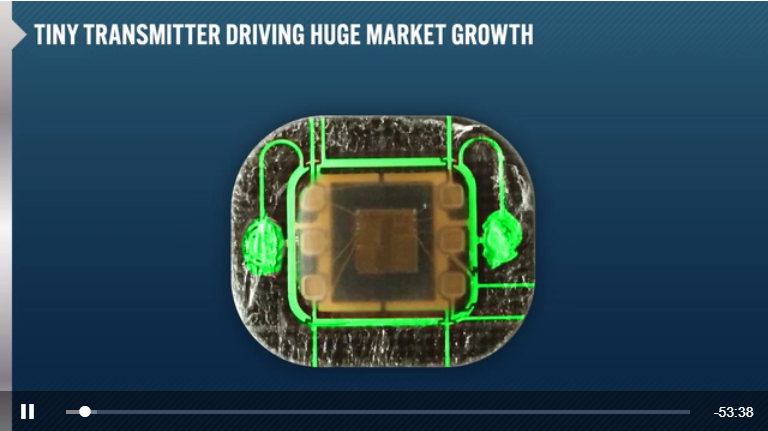 And now it sounds small.

What we're talking about here...

After 10+ minutes of hype, Robinson finally get's around to revealing that he's talking about touchless-transaction technology... and more specifically about the tiny transmitter devices that will need to be embedded in new payment cards that are starting to replace the older ones you either had to swipe or insert into the machine at checkout.

The company we're talking about here is one that makes the chips needed for this touchless technology to work... and we're told "this firm could become one of the most valuable companies in the world in the next decade".

Some more hyped-up claims from the teaser include...

In order to get all of this information and find out the companies he's teasing you need his "special investment dossier", which includes a number of reports. The one we're most interested in being "The Touchless Payment Revolution: 885 Million Devices Rolling Out This Year"...

And, of course, in order to get your hands on these reports you first have to buy into his Nexus-9 Network advisory newsletter service. This is priced at $5,000/yr but there are usually massive promotional discounts happening all the time so that you can join at less than half the cost.

But if you're looking for more information on the touchless payment stock he's teasing then you're in luck. This is the one we'll be exposing shortly.

*Unfortunately he doesn't give enough information on the other stocks he teases for us to be able to figure things out.

How Big Will the Touchless Payment Revolution Really Be?

The coronavirus undoubtedly helped push forward with the move to contactless/touchless payments, with some data finding that 55% of US consumers were worried about handling cash, but even without the pandemic there would be no stopping this revolution.

Touchless payments are up to 5x faster than inserting your card into a reader, and easier.

Additionally, the NFC (near field communication) chips that make all of this possible are safer to use than the old magnetic strip cards that you would have to swipe. From what I've found, they are at least as safe as the cards you have to insert into the reader.

The way this tech works is with small antennas to transmit and receive data. As was mentioned, there is no need for battery power. When tapping a card against a reader to pay, the reader gives off a magnetic field that provides power to the chip in the card, which then allows the establishment of a 2-way communication between your payment card and the reader.

Here's a short video explanation if you want to learn more:

Right now only around 2 out of every 10 credit cards are touchless in the US, meaning there is lots of room for growth.

Not only that, but this technology is also being used in new smartphones, smartwatches, and even things like Disney's "Magic Bands" and smart locks, smart thermostats, etc.

The NFC chip market is definitely going to grow, but will its usage really "surge 4,324%" like Michael Robinson tells us?

Well, to be honest I have no idea where he gets this number from. Estimates from places like Grand View Research are much less, but this is what he's predicting and in the promotional teaser he gives us some past examples of when big changes in payment cards where made and how the stocks of companies involved skyrocketed, such as with Infineon technologies when payment cards started to switch over from magnetic strips to EMV chips... 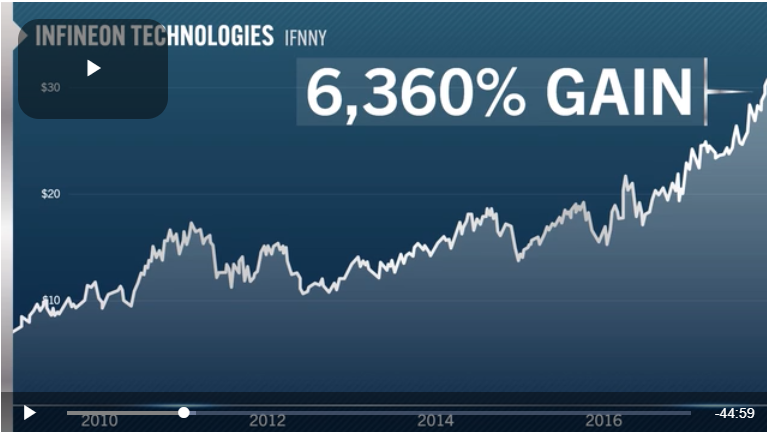 Can you expect similar gains here?

Well, the first thing we need to do is talk about the company he's teasing...

What is the company that is expected to "surge 1,768%" and make you filthy rich by this time next year?

Here are some of the better clues we were given... 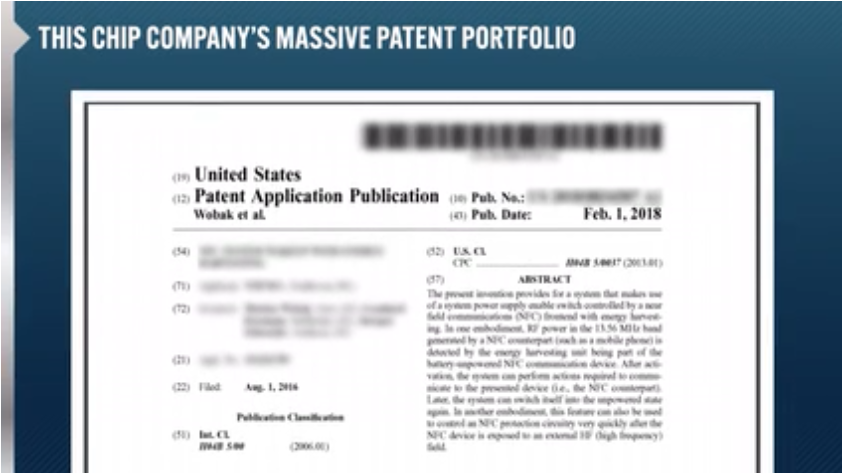 And luckily this is all the information needed to find a positive match here.

Any guesses on the company?

It's none other than the American/Dutch semiconductor manufacturer NXP Semiconductors (Ticker: NXPI).

The clues match up perfectly:

And that patent that was shown in the teaser, which I took a screenshot of above, is Patent Number 10680677 and this protects the invention of "energy harvesting", in which the magnetic field given off by another device can power the battery-less NFC chip and allow for 2-way communication.

NXP Semiconductors is the company behind "The Biggest Tech Rollout In History", but should you already go out and sign the papers on that new sports car you've been eyeing? Or would it be better to hold off on that?

NXP is by far the biggest in the NFC chip space, and is even the supplier to companies like Apple with such. They are positioned well for any surge in the use of this technology, but you have to keep in mind that this isn't some small-cap stock.

NXP's market cap is already over $35 billion, so it's going to take a lot to see the gains Robinson is talking about, and seeing these gains in "the next 12 months" seems highly unlikely.

As always, due your own due-diligence before investing and never fall for the hype that is thrown out there in investment teasers like this.

I hope this review has helped you out and provided some value to you. As always, let us know in the comment section below what you think of this stock pick?