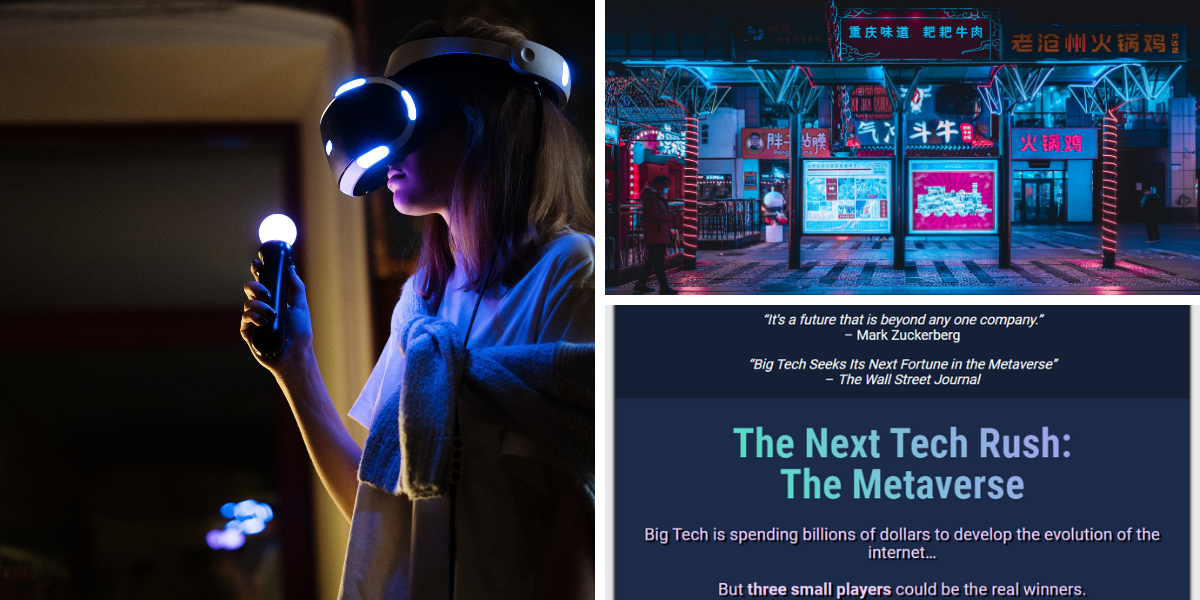 For better or worse, The Metaverse is one of the hottest topics in tech today. With the likes of Facebook, Amazon, Microsoft, Google (Alphabet), and Apple spending billions to develop the evolution of the internet, it seems like the next tech rush.

Money Morning’s, Michael Robinson agrees and believes that investors stand to benefit from The Metaverse rush, with “three small players likely to be the real winners”.

Michael says he wants to break the REAL story about the future of the Metaverse, as its not what the financial press is saying it is. Michael Robinson is the author behind the Nova X-Report research service where he looks for the latest developments in the tech and crypto markets. Michael’s been a fixture in tech space for more than 30 years. As a leading analyst and tech journalist, he’s been on the forefront of just about every major emerging technology story of the last decade. He’s even been nominated for a Pulitzer Prize. Metaverse-based presentations are proliferating and we have been keeping up, reviewing Jeff Brown’s “M.T.A.” Metaverse Company and Whitney Tilson’s “Connexa Terra” Stocks, among others.

At the most fundamental level, this is the story about the evolution in the way that we use the internet. The Metaverse represents the next frontier of the internet (according to some), the place where people will live, work, buy, and play. Right now, people interact on the internet with each other via social media platforms or by using smartphone apps, but the Metaverse will create new online spaces in which people’s interactions can be multidimensional, spaces where we will be able to fully immerse ourselves using a collection of new technologies.

We’re talking about artificial intelligence, the Internet of Things, cryptocurrencies, virtual and augmented reality here. Despite this big talk, this is giving off plenty of The Sims and Second Life vibes, where people create a player and work their way through a virtual world. However, Michael insists this is about way more than cute avatars and fancy virtual reality headsets.

He says The Metaverse will be used to achieve unprecedented advances and the biggest returns will come from the much smaller companies whose sole businesses are providing the foundation for this $800 billion movement.

To find out more about these smaller companies, all we have to do is join Michael’s Nova-X Report research service. The cost is a modest $39 for the first year and includes The Metaverse: The Next Chapter for the Internet special report with the stocks and crypto that he’s telling us about in this presentation. As part of the Nova-X Report, we will receive 12 monthly issues, access to Michael’s exclusive Crypto Circle, monthly video briefings with the inside scoop on the latest opportunities, access to The Nova-X Connection forum, and more.

Is The Metaverse About to Change Everything?

Michael thinks the possibilities are endless when it comes to The Metaverse, from going to concerts and shows and next-gen gaming to unlocking new approaches in everything from medical training, fitness, physical therapy, telehealth, and virtual patient care. So our jump to this platform isn’t a matter of “if”, but rather a matter of “when”.

This is why Facebook (Meta) is investing $10 billion this year alone to develop their Metaverse division and more than 160 companies are already racing to explore all the possibilities of the Metaverse.

Every major company is rushing in, but Michael says we should forget about these big tech stocks and instead “focus on plays that no one is talking about”. Sure enough, he says he has two tiny tech stocks and one crypto that could soar 1,000% over the next few years. Let’s find out what these are.

Here are details about the pair of stocks and crypto that could be about to soar.

Based on this set of clues, we’re inclined to think that the company being teased is Matterport Inc. (Nasdaq: MTTR). Here is what gave it away:

What Robinson may be teasing here is American multinational Vuzix Corp. (Nasdaq: VUZI).

What Michael is teasing here is The Sandbox (SAND), a virtual metaverse where players can build, own, and monetize their gaming experiences in the Ethereum blockchain using NFTs and $SAND, the platform’s utility token.

A Tech Gold Mine?

Out of the three investment opportunities presented by Michael, only The Sandbox has appreciated in value. Both stock picks have lost more than 50% of their market value in a littler over two months, so whoever invested in them back in November would currently be in the red.

As far as the NFT market goes, projections from Jefferies show that we could be talking about a market worth north of $80 billion by 2025, as digital assets increase in popularity. However, SAND doesn’t make it clear how its tokens can be used outside The Sandbox platform, which would severely hinder their potential upside. We are strictly talking about speculation on future growth here, rather than an investment based on intrinsic value.

Is The Metaverse really the future of the internet or just the latest fad? Let us know in the comment section below.