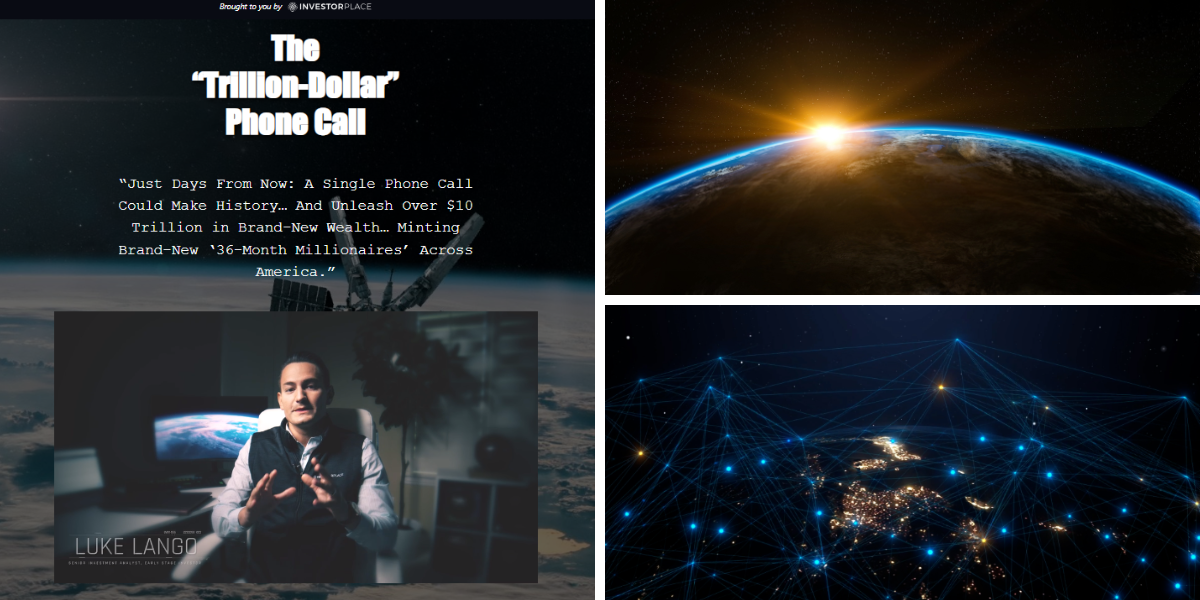 Could you see yourself becoming a millionaire in the next 36 months…because of a phone call?

This is exactly what Luke Lango is proposing in his latest presentation titled “The Trillion Dollar Phone Call.” Saying that this single phone call will not only instantaneously change the world as we know it, forever.  But it will also turn the page in history, starting the next chapter of mankind.

Luke is presumably talking about a historical breakthrough here, one that is now poised to disrupt global markets and launch entirely new industries. While unleashing over $10 trillion in brand-new wealth, all in under 36 months, give or take a month or two.

Luke Lango is a growth-oriented analyst and investor. Given his aggressive stance, I would say more like focused on hypergrowth stocks with 10X-plus upside potential. We have looked at Luke as an investor – Is Luke Lango a Fraud? And Exposed his Stock Picks as well.

This tease sounds mega bold, but as we’ll soon see, it’s simply the obvious conclusion. The conclusion to the research Luke is going to share with us today.

It all starts with a 4-page document, signed, and filed with the U.S. Securities and Exchange Commission – A highly redacted document, now known as “Exhibit 10.1.” This document is a “hush-hush” multimillion-dollar contract between two companies. One is a massive $125 billion private enterprise, owned by one of the world’s richest men in Elon Musk and a tiny, $12.4-million-a-year firm, quietly tucked away in the sandy Permian Basin of west Texas.

Luke says it all starts now, on a launch pad with the SpaceX Falcon 9 rocket at Cape Canaveral, Florida. This is because it is carrying a one-of-a-kind payload containing a breakthrough technology, with the potential to instantly change the world forever.

Today, we can position ourselves for what may become the biggest and most lucrative prediction in InvestorPlace’s 40-year history.

We can discover all the details, including how to get into this opportunity via a brand-new report – “The New Satellite Millionaires – How Anyone Can See up to 50 Times Their Money or More… Buying This Sub-$10 Stock.”

The only catch is that we need a full year subscription to the Early Stage Investor research service. This will cost us $1,999 and includes the special report mentioned above, 12 to 20 opportunities like the one we’re hearing about today,  each and every year, and more.

“One of the Most Important Developments in Human History”

Some big names are lining up behind this breakthrough space mission.

From a member of Congress, K. Michael Conaway to U.S. Senators Chris Van Hollen, Benjamin Cardin, and Ted Cruz to some of the largest money managers around, like  The ultra-secretive, hedge fund Citadel Advisors, Point 72, the massive hedge fund founded by billionaire investor and owner of the New York Mets, and D. E. Shaw, which is widely regarded as one of the industry’s most profitable and successful hedge funds.

Apparently, they’re not the only ones seeing the writing on the wall. With some of the world’s largest banks like Citibank, Bank of American, Morgan Stanley, Goldman Sachs also discreetly plowing millions into this breaking situation. Even the Royal Bank of Canada and the National Bank of Canada are quietly taking big positions in this one tiny firm.

Given the large cast of “usual suspects”, something is definitely going down.

What Luke is talking about here is the SpaceX Falcon 9 rocket launch (which has already occurred) and much more specifically the $81 million, 1.5-ton, first-of-its-kind cube that the rocket has deployed into orbit.

This is what experts are calling: “One of the Most Important Developments in Human History.”

What happens next is this breakthrough cube initiating the elaborate process of unfurling itself, unfolding and expanding, much like an origami flower over the course of several minutes. Becoming a massive, state-of-the-art, 693 square-foot phased array satellite.

Back here on Earth, a team will eagerly stand in silence, waiting for the phone to ring. See, this game-changing satellite acts and behaves exactly like a cellular phone tower here on Earth. Except it’s in space, orbiting the Earth, and transmitting cellular data from above.

Just one of these state-of-the-art satellites can provide seamless 5G cellular and internet coverage to over 2.4 million square miles here on Earth. The small American firm that Luke is teasing is on the verge of a rapid and full-scale deployment schedule, totaling some 168 satellites by the end of 2024. Putting lightning-speed broadband in the hands of every single person on the planet. Let’s find out its name.

This one is out there, no pun intended and I’ll need some clues to figure it out.

Based on this fair bit of info, I would say that the company in question is AST SpaceMobile Inc. (Nasdaq: ASTS). Here’s how the clues stack up:

Cell phone “dead zones” are a real thing, just try taking a hike or camping outside the city.

In this sense, satellite internet is attempting to solve a significant problem. Made even more significant by the fact that some 43 million Americans, mostly living in rural areas go without the ability to connect to the internet.

AST is far from the only one to recognize this opportunity, with satellite broadband players including Viasat (Nasdaq: VSAT), Globalstar (NYSE: GSAT), Iridium (Nasdaq: IRDM), and Elon Musk’s own SpaceX-operated Starlink. With so much interest in the space, significant money will be made.

Given the formidable competition that AST is up against in this space, it would be wise to hedge any bet with a commensurate one in some of the other names mentioned.

Is satellite internet the answer to connecting the world? Let me know what you think in the comment section below.