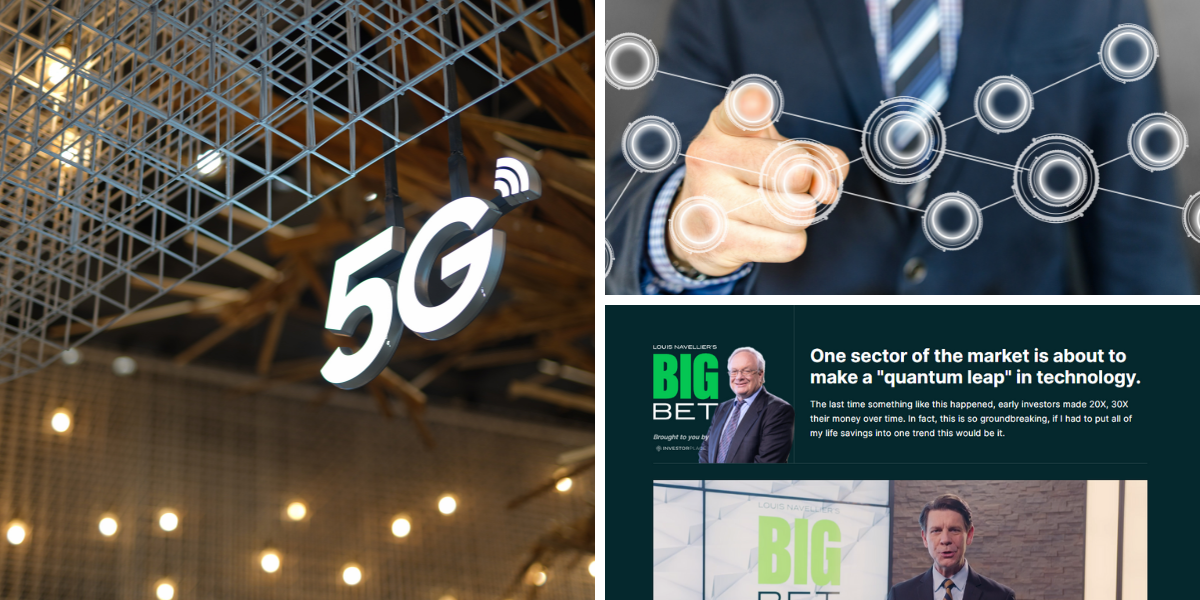 One sector of the market is about to make a “quantum leap” in technology. Louis Navellier simply calls it his “Big Bet”.

This big bet is supposed to remake whole industries, completely changing thousands of businesses, as well as our daily lives. Let’s find out what it is.

Our host Brit Herring introduces his guest, Louis Navellier, who is here to deliver a major announcement. He begins by saying that the last time a transformation even remotely similar took place, innovative new businesses burst on to the scene and made incredible profits. Louis Navellier’s investing career spans more than 35 years and he has one of the most exceptional long-term track records of any financial newsletter editor in America. His popular Growth Investor advisory service, which was originally established in 1998, has beaten the S&P 500 by a margin of 3-to-1 over the past 17 years. He also manages over $5 billion in mutual funds and institutional accounts through his fund management company, Navellier & Associates. 5G presentations are nothing new and we have reviewed several here, including Dylan Jovine’s “5G Arrow” Company and Michael Robinson’s “5G Aftershock Market” Stocks.

Louis continues, saying if we fully grasp what we’ll be discussing tonight, “it could mean a total economic transformation for our lives”. So what’s this “Big Bet” and big announcement all about? Given Louis’ vast market experience, he uses advanced computer systems to help him identify the biggest moves on the stock market. Throughout the decades, his systems have helped alert him to the biggest trends and investments way before they hit the mainstream.

Just recently Louis came across another major development in the markets. His signals flashed yet again, only this time at a level beyond what he’d ever seen before. So he dug in, started doing more research, looking into the numbers and what he ended up discovering, by his own admission is “one of the biggest and hottest moneymaking opportunities” he’s ever seen in his career. The thing is though, that it isn’t a specific stock or a type of investment, but rather an entire sector.

He is ALL IN on this one sector and has begun calling it his “Big Bet”. Louis’ “Big Bet” sector is 5G and by the end of this presentation he is going to explain how we can access one of his stock recommendations to play this Big Bet sector – ticker symbol and all.

Before we get to this, we are informed that the only way to get access to Louis Navellier’s model 5G portfolio, is by becoming members of his “elite research service” called Breakthrough Stocks. This will cost us $1,995 for a full year, after a 20% discount. What Exactly is 5G?

5G, which stands for fifth generation broadband technology, is at its core really about one thing, and that is, sending massive amounts of data across the internet at incredibly fast speeds.

While this might seem somewhat basic for a “Big Bet”, after all the jump from 3G to 4G was a nice step up, but nothing transformational. Louis says there is absolutely nothing basic about 5G technology. Most people think technological advancements come in a linear progression. They evaluate the amount of change they experienced between in the past and then project that same amount of progress forward. However, if you know anything about technology, then you know that it doesn’t advance in a linear, step-by-step fashion. It progresses exponentially, where the pace of change gets faster over time.

This has happened with computing power, data storage, internet speed, performance got better, faster and cheaper over time. The same is true with 5G. 5G is 1,000 times faster than 4G, which means it will allow for up to 1,000 times more data than 4G. In other words, for every single device 4G currently supports, 5G can support 1,000 times more devices. But is this world changing in any way? The answer is: it could be. For what seems like years now, we’ve been promised big breakthroughs like artificial intelligence, driverless cars, augmented/virtual reality, and the Internet of Things. Up until now, each one of these technologies has largely remained exactly that, just a promise.

This is because they all rely on the rapid transfer of massive amounts of data over a reliable network. Louis believes 5G is the “transformational technology platform” that is going to bring these technologies into the mainstream and be the foundation for many future technologies. Among these are six 5G stocks that are about to go on incredible runs according to Navellier.

Louis tells us that these stocks are all screaming buys and the absolute best way to play the incredible 5G megatrend that’ll be unfolding over the next few years.

For one, they’re all small-cap stocks, could go up as much as 20-FOLD and still only be a fraction of the size of Uber or Netflix, and meet all three crucial “Big Bet” requirements:

For all his talk, Louis doesn’t provide a single clue as to what any of his six 5G model portfolio picks could be, nor does he give the one stock recommendation promised earlier in his presentation. We feel a little mugged, but we can still analyze whether 5G will do all of the things Louis thinks it will and maybe even mention a company or two of our own that could benefit from the technology upgrade.

A Real Quantum Leap in Technology?

What we are talking about here is not just network speed speed, in terms of faster wireless capabilities, but billions of devices of any kind being able to connect, interact, and collect data from each other.

It goes without saying that this has far-reaching implications, both from an individual privacy perspective and also what this technology in the hands of industries and governments could mean. There is an old adage that says “no thing is bad in and of itself, its what we do with that thing that could be bad”.

This definitely applies to big breakthroughs like artificial intelligence and the Internet of Things, which 5G is helping make possible. These technologies will change aspects of our lives, sure there will be some bad aspects like government data collection, which must be kept in check, but automation, communication, and the speed at which these things are done should outweigh the bad over the long-term.

If 5G is a transformational technology platform, then businesses like Advanced Micro Devices (Nasdaq: AMD), which manufactures chips for this platform and Ciena Corp. (NYSE: CIEN), which is a network software provider for the telecom industry, deserve a look.

What kind of technologies and applications do you foresee 5G creating? Tell us in the comment section below.