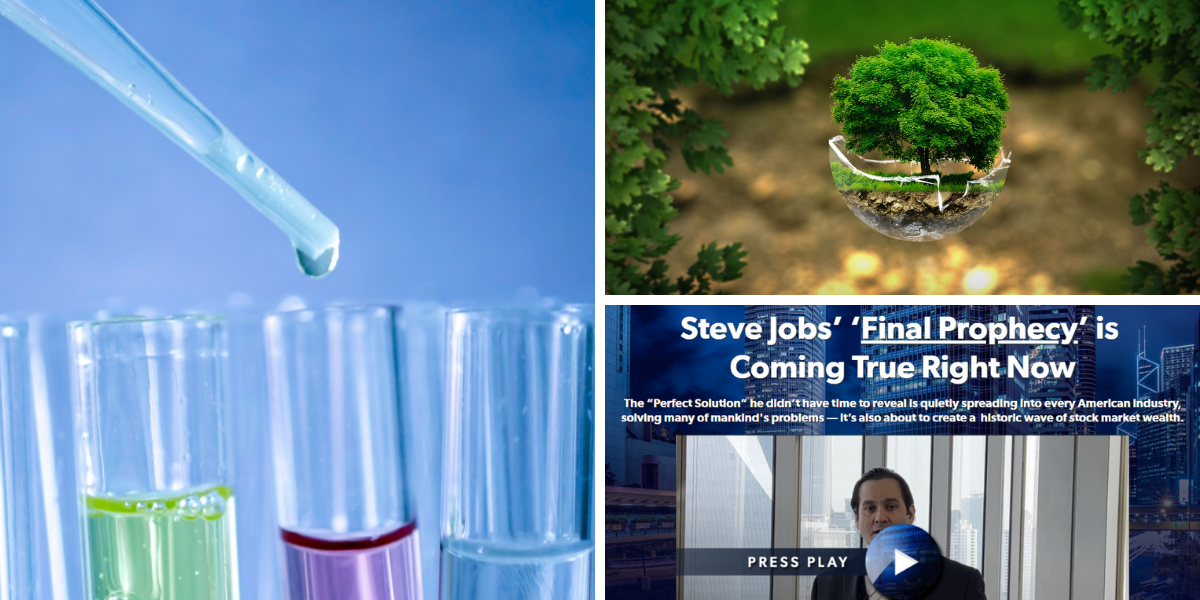 A forensic accountant who’s instructed the FBI and the Pentagon says that Steve Jobs’ “Final Prophecy” is now coming true.

Joel Litman is that accountant and what the prophecy envisions is something he calls “The Perfect Solution”, which is about to create a historic wave of stock market wealth.

Joel’s secret forensic approach to the markets helps him uncover where the so-called “smart money” money is headed, before that information is known to the general public. He put together the presentation we are going over today because he recently uncovered where the next big wave of money is headed. Joel Litman appears to be the real deal, with his Hidden Alpha investment research service reportedly returning 36% per year on average since it began publication. Joel is also the President and CEO of Valens Research, a global corporate performance and investment research and analytics firm that owns Hidden Alpha as well as other publications. We have reviewed similar presentations to Joel’s here recently, including Whitney Tilson’s “America’s Next Big Monopoly” and Jeff Siegel’s Helix-Scaling Stock.

I’m sure you’ve noticed in recent months how digital technology companies have crashed from their lofty highs. In addition to Facebook, companies like DocuSign, Twitter, Shopify, and others have fallen by more than 40%. Well, Joel is here tell us where he believes the institutional money is going next.

The answer to this all important question is: A subsector of the markets very few people are paying attention to right now, In fact, Joel is willing to bet we’ve never even heard of it.

He’s talking about a group of companies that are behind a totally new type of technology breakthrough, which were the subject of the late Apple founder Steve Jobs’ “Final Prophecy” in 2011, just before his death. For those that may not remember, Jobs’ accurately predicted the internet, laptop computers, Siri and Alexa voice assistants, e-commerce, cloud computing, and that’s just to name a few, long before these things were ever a blip on the radar.

So for the next few minutes, forget the technologies dominating today’s headlines. Forget about cryptocurrencies, 5G, electric vehicles, and self-driving cars. Ditto when it comes to the blockchain, quantum computing, artificial intelligence, and virtual reality. Scratch NFTs, apps, space exploration, and cloud computing off the list too.

He’s 100% convinced the digital revolution as we have known it up to now is about to get steamrolled by something even bigger, which is just now hitting an inflection point. Today, we can be among the earliest to get into the “SynBio” or Synthetic Biology sector with three stock picks for huge potential gains in the coming months.

In order to get our hands on this info we will need access to the brand-new report: Profiting From the NEXT Big SynBio Wave. The only way to get it is by subscribing to…you guessed it – the monthly stock research service Hidden Alpha at a cost of only $49 for the next year. Among the perks are three special reports, including the one highlighted above, 12 monthly issues of Hidden Alpha and access to Joel’s top recommendations at a tiny fraction of the price that big institutions pay.

What in the World is SynBio?

As we have already established, SynBio refers to Synthetic Biology and according to Joel, it is “the most important technology of the next decade”.

Insofar as Steve Jobs accurately predicting this change 11 years ago, here is the exact quote from his official biography by Walter Isaacson: At the time not many knew exactly what Jobs was talking about,  but now we understand that he was essentially talking about how a suite of technologies would eventually allow us to engineer organisms’ genomes directly, and create an entirely new field of science, called Synthetic Biology.

This field of science is basically the combination of computer science with genomic analysis and gene editing, being used to create new materials, new medicines, new food, new fuels, new tests, and much more. The price of sequencing DNA (the very building blocks of life) falling to 1/10 millionth of what it cost 20 years ago, has enabled the emergence of this field, but what does it actually look like in practice out in the real world?

Here’s an example: The most important material in the world for clothes and fabrics is boring old cotton, which accounts for half of all our textiles. There hasn’t been a big innovation in the cotton industry since the cotton gin, nearly 230 years ago. On average, cotton takes about 180 days to grow and 10 tons of water are needed just to make a single pair of blue jeans. Yes, 10 tons of water for each pair of jeans.

Now, thanks to synthetic biology, one Massachusetts company is growing cotton 10 times faster in a lab, while using 80% less water and land AND instead of taking six months, the whole process purportedly takes just 18 days, while requiring no insecticides or pesticides.

Remember this is just one example and the same thing that’s happening to cotton is now taking place with cannabis compounds, leather, rubber, plastics, cement, and more. To position ourselves to get really rich over the next few years, Joel has three stock recommendations for us, including his favorite business in the synthetic biology space.

The first stock symbol is ILMN, which is Illumina Inc. (Nasdaq: ILMN). This was given to us by Litman. For those that don’t know, Illumina dominates the gene sequencing market.

Today, Illumina has 17,000 DNA sequencing machines installed with 8,000 different customers, these machines cost as much as a million bucks apiece. Nearly all the big drug companies use Illumina’s machines, like Merck, Bayer, and Bristol Myers and so do nearly all of the best small synthetic biology companies too. Illumina’s revenue continues to soar (up 288% over the past year) and Joel believes its growth will get even more ridiculous in the years to come.

This second stock is a small biotech company working with the Walter Reed Institute on an mRNA vaccine for malaria, which could help protect against 200 million cases each year.

Based on this clue alone, we think the company in question here is Inovio Pharmaceuticals Inc. (Nasdaq: INO). Inovio is a biotechnology company focused on bringing to market precisely designed DNA medicines to treat and protect people from a variety of infectious diseases, including cancer. Inovio and GeneOne Life Science are also collaborating with the Walter Reed Army Institute of Research (WRAIR) in Maryland, to conduct clinical trials for a Middle East Respiratory Syndrome (MERS) DNA vaccine.

One of the best ways to profit from any new technology is to “own the platforms”. With this thought in mind, the next company is actively buying up other companies that offer key technologies for cell sorting, drug manufacturing, and protein production.

Bill Gates is one of the biggest and earliest investors and so is billionaire Andreas Halvorsen, as this tiny company is his fund’s #1 holding. This is undoubtedly Ginkgo Bioworks Holdings (NYSE: DNA). It is Halvorsen’s Viking Global Investors fund top holding and it owns the leading horizontal platform for cell programming.

The Most Important Technological Breakthrough of our Time?

Synthetic Biology has the early stage growth, innovation, and capital flow to be among the most important technologies of this century.

It’s impact is already being felt far and wide, from mRNA vaccines to biofuels and more. So change it will create change, good or bad and that means dollars from an investing standpoint. Joel has the right approach here insofar has investing in a small basket of some of the best-in-class synthetic biology companies in their respective niches, as the vast majority of these businesses are still at the onset of their growth cycles, unprofitable, and thus reliant on equity and debt capital in order to execute their long-term plans.

Are humans playing with nature with this technology or is it humanity’s future? Tell us what you think in the comment section below.