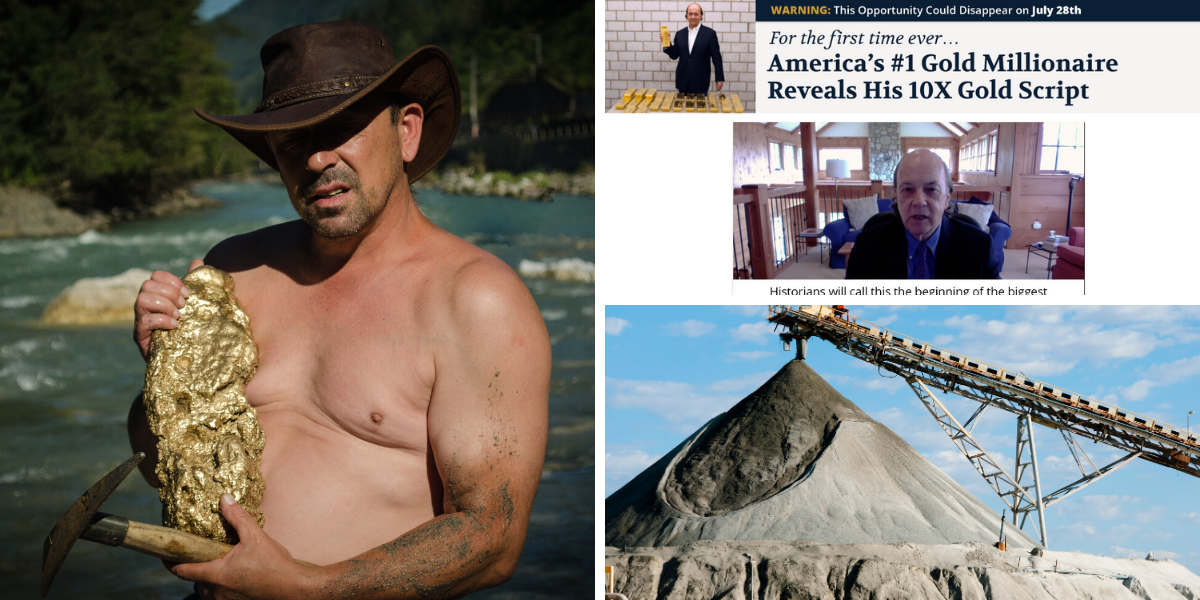 Jim Rickards is back at it teasing another investment opportunity... this time for the chance to 10x your money by investing in gold.

He claims this is "the beginning of the biggest gold boom ever" and that investors putting their money in the right stocks could make a fortune.

Let's talk about the teaser for this opportunity and some more of the claims made...

There might be more than one variation of this on the internet, but here's what I came across... 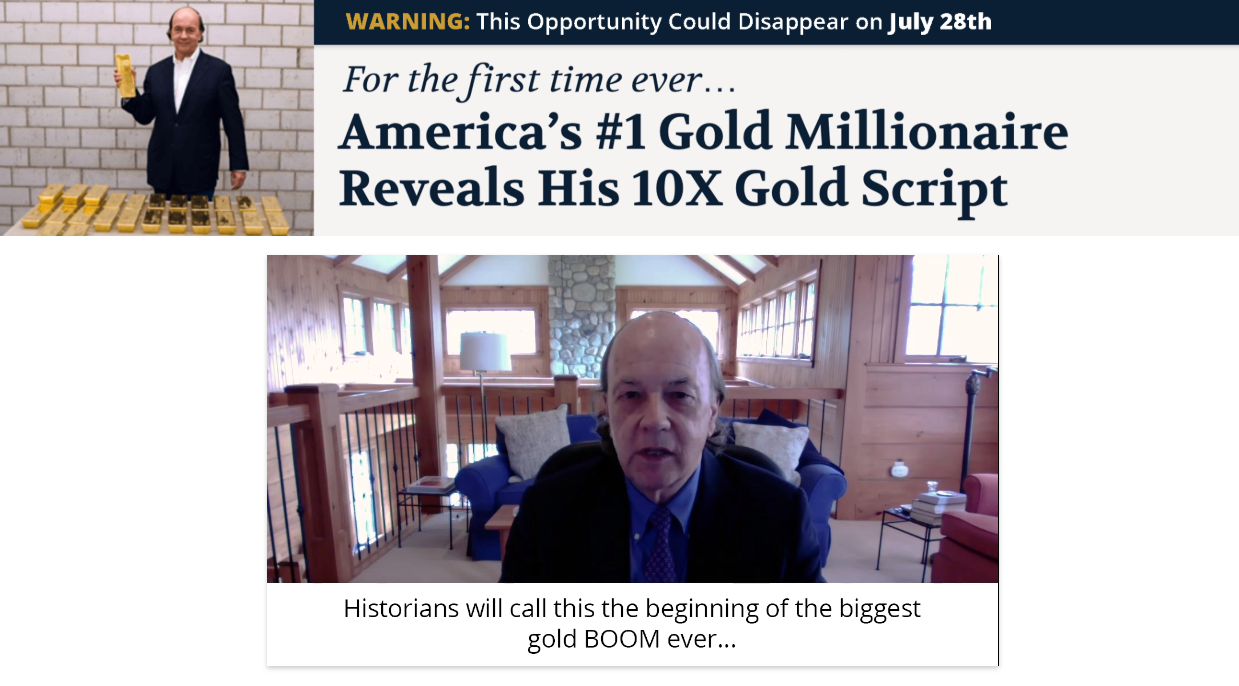 As we know, Jim Rickards is the guy behind it all. He's a big name, and the fact that he has his own Wikipedia page goes to show this. Rickards a best-selling author, lawyer, media commentator, and big-time gold speculator, which is what's relevant here.

This particular teaser starts off talking about how small gold stocks are exploding in price... and about half of the presentation is just him showing a bunch of gold stock charts that have soared in the past and talking about all the money you can make with the predicted upcoming boom. And let me remind you, "Historians will call this the beginning of the biggest gold BOOM ever"... according to him of course.

How much could you make with this new gold boom?

Well, according to Rickards, you could "turn a small stake into a fortune... in the coming months".

He talks about a "rare phenomenon" that has only happened a couple times in the last 20 years (in 2001 and 2009), and it's supposedly happening again right now.

Rickards went on to state that the last time it happened gold stocks soared, and continued to show a bunch of charts, such as Royal Gold going up 1,476% here... 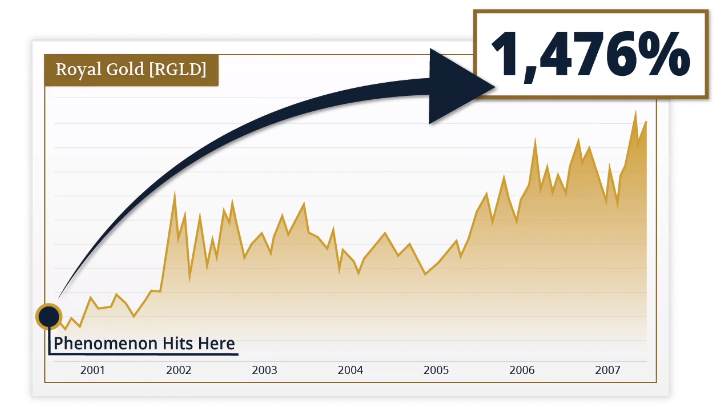 According to him, the last few times this happened "on average they exploded as much as 1,748%".

I don't know about you, but I'd like to see my portfolio realize this amount of gains.

But, then again, I don't think you should count on making massive gains like this. There does seem to be a lot of hype here.

Rickards claims that with this phenomenon that's happening again... this time it's "about to send gold and gold stocks to the moon".

He clearly states that "I’ll even give you some names and ticker symbols… no strings attached"... which leads me to believe that he's going to give the names of stocks he thinks we should all be investing in for 10x gains.

But I was sorely mistaken.

Just like always, he has a special report that goes over all of his gold investment recommendations for 10x gains, titled The 10 Biggest Stars of the Coming Gold Bull Mania... 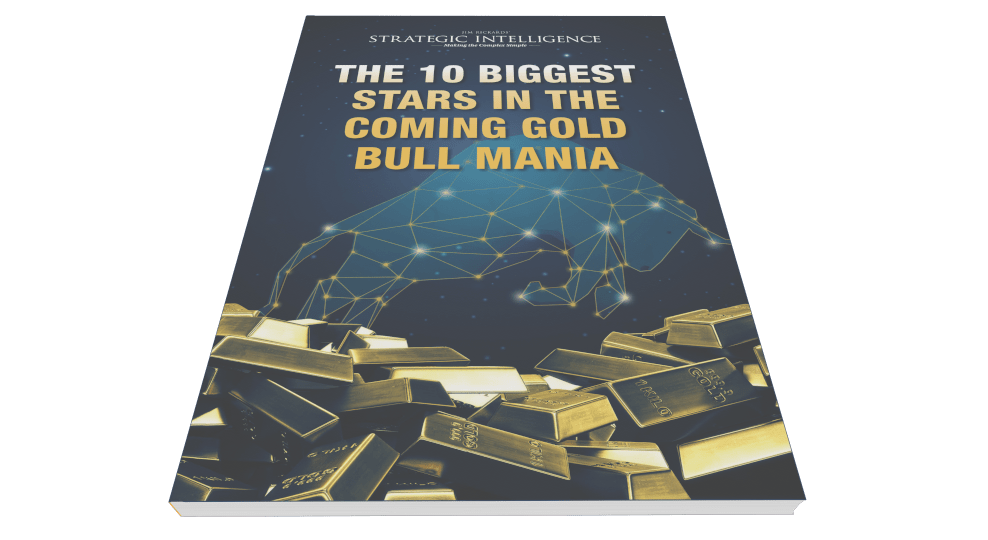 Now how do you get your hands on this special report? How do you find out the names of the gold stocks he's recommending? Well, you first have to join his paid advisory service, Strategic Intelligence, for $49/yr (this is a discount price) - another mass-marketed follow-along style investment advisory service.

This is pretty much the investment advisory sales blueprint nowadays.

This "10X Script", aka "10X Gold Script", is just a term that Jim Rickards made up to refer to the current economic situation we are facing.

Particular, he's talking about the combination of a weakening economy and the Feds stepping in to try to stimulate it.

He mentions that we've seen this phenomenon two other times in the past 20 years, and he was talking about in 2001 and in 2009.

Because of the coronavirus pandemic, we are seeing a similar situation here, only that the past Fed stimuli were smaller than what we are seeing now.

The idea is this: if the past government stimulus sent many gold stocks over 10x, and what we are seeing now is on a larger scale, then this should send even more gold stocks to 10x... or at least this is what Rickards predicts.

Now of course the past examples are from asset bubbles and what we are experiencing now is very different, but there are many similar factors involved here... and this is why Rickards believes gold will follow a similar trajectory.

And by the way, he is far from the only one predicting gold to soar in price. Billionaires are buying in and there are lots of other gold investment teasers floating around right now, such as "Tier 2 Gold" and "A9 Gold Stocks".

However, he makes it clear that these won't get you 10x gains, and he's right. These aren't cheap stocks that can make small moves and still give you 10x your money.

The "10x Gold Script" stocks that he's been teasing are junior mining stocks, or at least most of them. These are what he goes over in his "special" report that you have to buy into his advisory service to get your hands on.

Here at Green Bull Research we normally expose stock picks like this for free to our readers. However, there was no information given on these stocks, and so I have no clues to figure things out with.

Hopefully this short review helped clear the air on what's going on here. I wish I could have provided more, but the fact that no hints were given as to what junior gold mining stocks he's recommending didn't allow for me to expose his picks.

*Please, if you have any information on what gold stocks he's recommending, let us and other readers know in the comment section below!