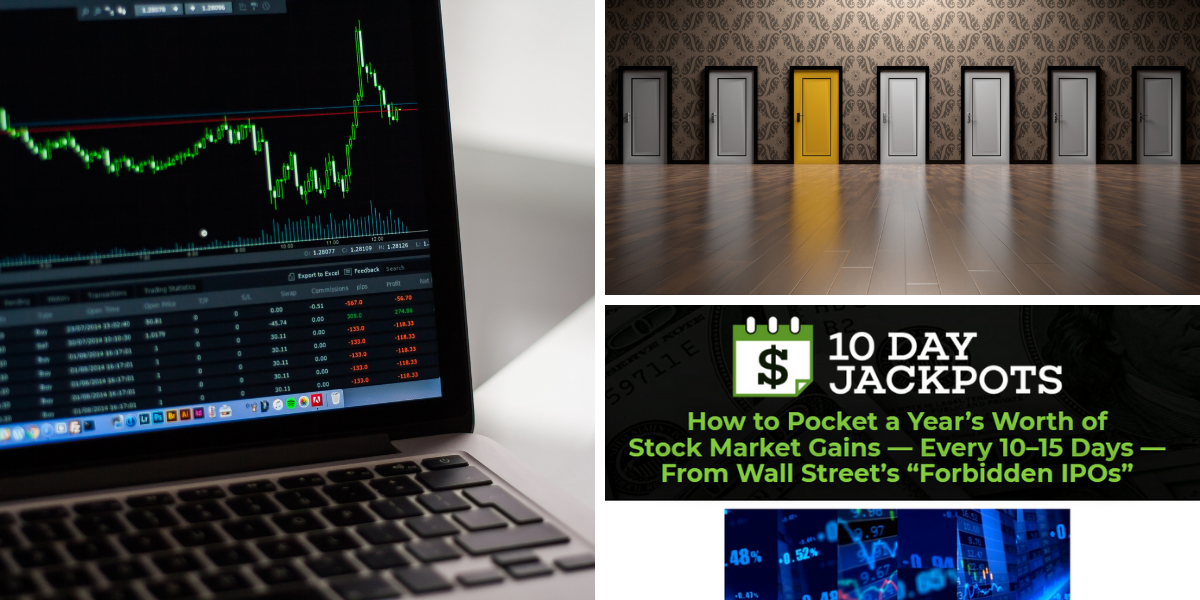 How would you like to pocket a year’s worth of stock market gains every 10-15 days? Well now we can, according to Jeff Siegel thanks to something called “10 Day Jackpots” or “Forbidden IPOs”.

While this may sound like a stock market version of National Treasure, the IPO market has been roaring this year, so let’s see what exactly is being hyped here.

What is being offered here is a completely new way to profit from IPOs, which thus far has a 92% success rate, meaning 9 out of every 10 trades are winners. 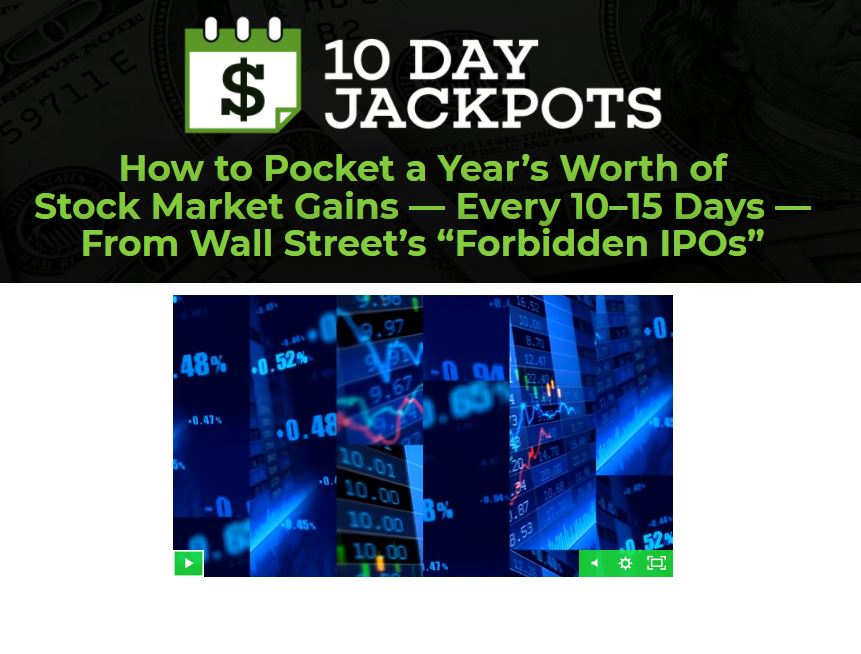 Jeff Siegel is the publisher and managing editor of Green Chip Stocks, an independent investment research service that focuses primarily on emerging market opportunities. Jeff also works as a consultant, has been a featured guest on Fox, CNBC, Bloomberg Asia, and is the author of the best-selling energy book, Investing in Renewable Energy: Making Money on Green Chip Stocks. We have covered a few Jeff Siegel presentations here in the past, including his “Solar Window” Technology Stock and Anti-Aging Stock teaser.

According to our host, these WAY above average results are a direct consequence of a hidden backdoor into the IPO market. A market that has seen the highest number of new IPOs since the dot-com era in the late 90’s. There are a couple of reasons for this:

These two things have created “pipeline pressure”, which is another way of saying that demand is exceeding supply. Quantitative easing, stimulus spending, the search for yield are also all factors, but we digress. Jeff rightly points out that IPOs have traditionally been the domain of insiders, high net-worth investors, and the institutions that underwrite them. Jeff’s personal “10 Day Jackpot” strategy aims to change this.

With this “never-before seen” strategy, anyone regardless of their level of wealth or relationship to the company listing its shares, will be able to trade and lock in profits prior to their big IPO day. This is a bold claim and one that would drastically change things if true.

Jeff assures that he is going to reveal exactly how to get in on once inaccessible IPOs or “forbidden IPOs”, rather than having to wait until shares are publicly traded like everyone else.

This presentation is a pitch to Jeff’s new “elite” trading service called The Weekly Score. The cost is normally a whopping $3,999 per year and its purpose is supposedly to help members “get richer than their wildest dreams” by investing in “forbidden IPOs”. However, for a limited time he is offering it to viewers of this presentation for “only” $1,295 for the first year.

A subscription will also get you access to instant trade alerts, a full model portfolio, exclusive customer care, and Jeff’s personal email address to send him any questions or concerns directly.

What in the World are “10 Day Jackpots”?

This is all about a “unique” way to trade the IPO market via a little-known strategy.

Previously, the only time retail investors got to invest in startups and other innovative companies was the post-IPO stage – by which time most of the lucrative gains have already been secured. However,  thanks to The Jumpstart Our Business Startups (JOBS) Act of 2012, which eased securities regulations making angel investing more accessible in process. We now no longer have to be accredited investors to invest in private company securities.

Jeff’s “10 Day Jackpots” focus on another aspect of this, which he calls “secondary IPO’s” and a very specific “pricing glitch” strategy that happens when early IPO investors sell their shares on the secondary market after a company’s initial public offering. This requires a bit of explaining as it is far from a simple or straightforward strategy.

A secondary offering refers to the sale of shares owned by an investor to the general public via the stock market. These are shares that were already sold by the company in its IPO. All proceeds from a secondary offering go directly to the stockholders who sell their shares rather than to the company. For illustrative purposes let’s use a real life example:

Seelos Therapeutics (Nasdaq: SEEL) stock went public at $0.90 per share, this is easy enough. But it also had something called a follow-on offering (“secondary IPO” in Jeff’s words), as it needed to raise additional capital. Seelos priced this follow-on offering at $0.79 per share. Predictably, the market reacted by driving down the price of Seelos stock. This is the “pricing glitch” that Jeff mentioned earlier and what allowed investors to purchase stock for as little as $0.63 per share on the open market. Of course, when the time for the follow-on offering arrived, shares sprang back up to the follow-on price ($0.79 per share), netting investors who had purchased stock at $0.63 about 27% in the span of only 4 days!

Jeff has more examples like this, but you get the gist – 10 Day Jackpots can be very lucrative if you know where and how to look.

Jeff reveals that he has indeed identified a brand new can’t miss “10 Day Jackpot” trade, which he would like to tell us all about.

Unfortunately, we never get that far. Instead, the presentation rather abruptly ends as we are urged to “get started with Jeff’s Weekly Score service now”. Fine by us, as we can take a more in-depth look at secondary offerings instead and their potential pitfalls.

A Year’s Worth of Stock Market Gains in Only A Few Days?

As we described a little earlier, some companies may offer follow-on offerings to their initial public offerings, which are called secondary offerings. The reasons for a follow-on offering can be myriad, from a need to fund additional research and development (R&D) to complete acquisitions or simply for day-to-day working capital. The reason is far less important than the type of secondary offering.

As you can likely already tell, there are pro’s and cons to both. Strictly from an investor point of view, non-dilutive secondary offerings are ideal. Provided that an early investor simply wants some liquidity and is selling off part of their stake. Mark Zuckerberg did this back in 2013, raising $2.3 billion dollars, as do insiders with sizable stakes on a regular basis.

Lists of announced, upcoming secondary public offerings can readily be found on the web for free. So there’s no need to pay for an “insider” list, as these are simply arbitrage opportunities, which are a staple of every intelligent investor’s toolkit and can yield above average returns, provided risk is diversified with a basket of such opportunities, rather than any single one.

Do you currently practice any stock market arbitrage strategies? If so, which ones do you favor? Tell us about your experience in the comment section below.