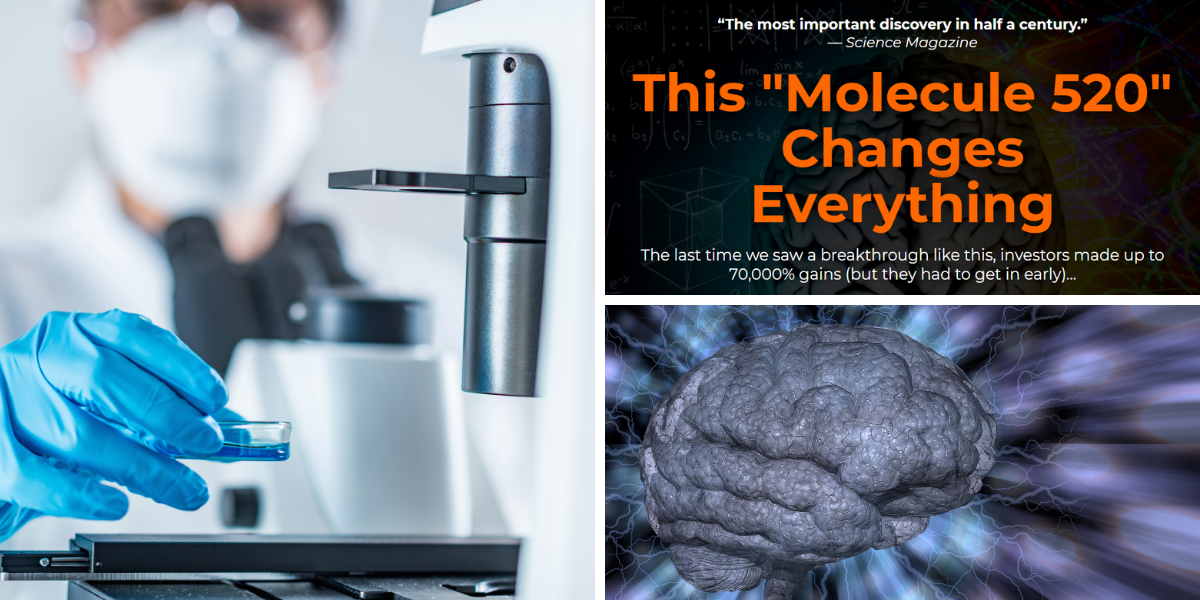 Jeff Siegel has been teasing the opportunity to invest in what he calls "Molecule 520", and claims that early investors in a breakthrough like this could see "up to 70,000% gains".

Sounds amazing, but what is this "molecule 520" and are the companies he's teasing worth investing in?

In this article I'll be exposing his "molecule 520" stocks for free, so stick around.

He claims that "This 'Molecule 520' Changes Everything" and teases the opportunity at making up to 70,000% gains...

Jeff Siegel is the guy behind it all. He's an editor over at Angel Publishing where he runs the investment newsletter service called Green Chip Stocks. Primarily he focuses on investment opportunities in the markets of alternative energy, transportation, sustainability, cannabis and agriculture, but in this teaser his focus is on something a bit different, as I'll get into. As far as his background goes, he doesn't have some amazing past working on Wall Street, but seems to be somewhat of a normal guy who spends his days digging around for good investments.

The "molecule 520" teaser started out with a story about some alcoholic named George whose addiction nearly ruined his whole life, but then he ended coming across a clinical trial for some "breakthrough treatment" for treatment and the rest is history... he was cured.

We are told that "molecule 520" can cure addictions, help improve the memory of Alzheimer patients, help with diabetes, anorexia, PTSD, depression and more

It's curing diseases that have been long thought to be incurable, which does indeed seem to be a breakthrough as Siegel claims.

We are also told that the FDA just gave the greenlight to the company producing it. It supposedly fast-tracked the drug and right now some of their drugs are in stage 3 trials, which are the last step before being completely approved.

Furthermore, Siegel tells us that biotech and big pharma buying are buying up shares of companies involved with this molecule, and that top-level investors like Peter Thiel and Kevin O’Leary "are pouring tens of millions into this", with O'Leary stating that “This could save lives, cure depression, help alcoholism, get people off opioids — why wouldn’t I want to be invested?”

It sounds absolutely incredible... to be able to invest in such a good cause and to make a fortune in the process?

But then again, you have to take investment teasers like this with a grain of salt, as was evident from Siegel's anti-aging stock teaser... don't always fall for the hype... it ends in a sales pitch.

So, Jeff Siegel actually teases the opportunity for three different companies that have something to do with this amazing molecule.

All the details are contained in "free" reports that he's giving out, the one we're most interested in being Three Magic Molecule Picks for Quadruple-Digit Gains... 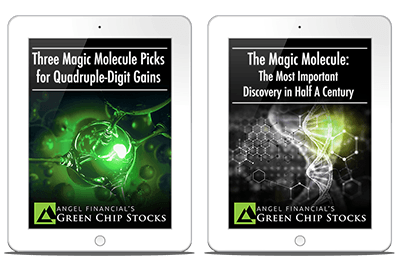 And how do you get your hands on these free reports?

You guessed it! As always, you first have to take out that credit card of yours and buy into his subscription advisory service, Green Chip Stocks for $99/yr.

But if you're a regular here at Green Bull Research then you know this is no longer necessary. I'll be revealing the stocks being teased for free in a bit, but let's first talk about this magical molecule the entire opportunity is focused around.

So, what is this miraculous "molecule 520" that Siegel is teasing?

He claims it can cure alcoholism in as little as one treatment, and can be used to treat a number of other diseases.

He also tells us that it is plant-based and naturally occurring, and even gives us it's molecular structure here... 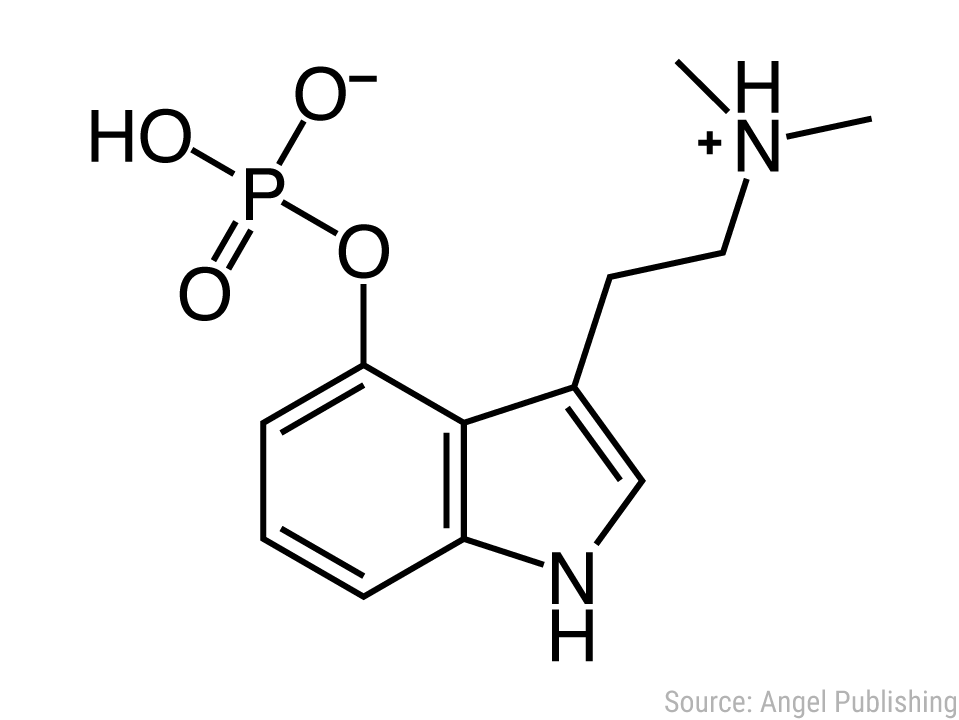 With this said and the structure shown, I can positively identify what he's talking about as none other than the compound psilocybin, which is a compound that naturally occurs in more than 200 species of fungus, or what are more commonly known as "magic mushrooms". 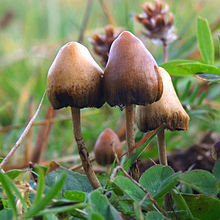 So psilocybin is the real name here. I don't know how he came up with the name "molecule 520", but it doesn't matter because this was just made-up for the teaser.

Psilocybin was actually used as psychedelic psychotherapy in the 1960's, but increasingly restrictive drug laws led to less and less research funding and eventually the disappearance of this promising therapy altogether... until recent years. It's still considered a Schedule 1 substance, but people are starting to wake up again to the massive potential that it has as a medical treatment.

Psilocybin, according to Wikipedia, often leads to "euphoria, visual and mental hallucinations, changes in perception, a distorted sense of time, and spiritual experiences".

What it does is helps people break out of thinking patterns by helping the brain use unused or underused brain circuits.

In a nutshell, psilocybin resets the "default mode network", which is the state your brain is in when at daydreaming or mind-wandering. In a way you could think of it as your brains default state when you're not using it.

Some people have developed very negative and unhealthy default mode networks for one reason or another, and what psilocybin helps to do is disintegrate and then reintegrate the network.

Depression, alcoholism, PTSD, tobacco addiction, OCD, etc, etc... there are lots of diseases that can potentially be treated in this way.

If you want more information on how it all works and its effectiveness, here's a short informative video I found:

It's a treatment that is finally beginning to resurface. The potential is huge. And this means the investment opportunity will be as well. And it's not just psilocybin we're talking about here. Other psychedelic substances work similarly and have big potential.

The "Molecule 520" Stocks Being Teased

Siegel teases 3 companies - this we know - and more specifically... "Three Companies That Will Change the World and Make Early Investors a Fortune".

Want to know the names of these companies?

He tells us that "you have to get in now to make the big money", so let's hurry up...

He really didn't give us very much in the way of clues for any of the companies we're being teased with, but here is what I was able to gather on the first company, which is the one he's hyping up the most here...

And of course we were also told about Kevin O'Leary investing in it.

Not many clues, but luckily for you it was enough to figure it out, largely in part to this company being teased in the past in his "magic molecule" teaser.

The company here is MindMed (OTCQB: MMEDF). This psychedelics startup company is backed by Mr. Kevin O'Leary from ABC's Shark Tank show, it did receive  $24 million in funding ahead of IPOing (actually $24.2 million), and I even found it mentioned that on it's very first day being a publicly traded company there were over 14 million shares traded. Not only that, but the company is largely focusing on treating opioid addition, as mentioned.

That said, the drug they are developing to combat opioid addiction is known as 18-MC, which is a non-hallucinogenic molecule that is based on ibogaine, not psilocybin. Ibogain and psilocybin are both psychedelic molecules coming from plants, yet they are different. So it seems that Jeff Siegel's teaser isn't all that accurate (typical).

What we know about the second company being teased here is that...

This seems to be Captiva Verde (CPIVF), which is mainly focused on cannabis cultivation, but has acquired a "pharmaceutical-grade psilocybin mushroom growing, packaging, sales and distribution program in Mexico" that has "over 300 types of narcotics and psychoactive medicines".

It sounds like it's a decent fit based on the clues provided. The stock price has recently dropped at the time of me writing this, but if you would look at it back in late July, 2020 when it was selling for around $0.24 a share I suppose the whole "its stock performance has blown past the S&P 500 by almost 800%" statement would be true (and it seems that this is around the time the teaser surfaced).

And for the 3rd company that he teases we are told:

I'm not entirely sure on this play, but it seems it could be Myco Systemics, which is an agricultural technology company working on developing large-scale myco-cultivation infrastructure, including micro-climate control, contamination containment, a cartridge-based system for cultivation that reduces labor costs and more.

They do fit the bill based on the limited amount of information given in the teaser, but are still a private company and this is why I'm not 100% sure on it. I suppose he still could be teasing the opportunity to invest after, and if, they go public in the future however.

The psychedelic drugs market seems to be very promising. Many of the drugs being developed, some natural and some based on natural substances, have little to no negative side effects, something that is pretty darn uncommon and because of this the market is expected to grow.

There are all sorts of estimates out there, but one that is pretty conservative comes to us from Data Bridge Market Research, estimating that by 2027 the market will reach $6.85 billion, with a 16.3% CAGR... and this is with psychedelics being labeled Schedule 1 drugs, which make R&D harder to go about.

As far as the companies go, MindMed is the most promising, so it's no surprise it's Siegel's number one pick here. However, the company is still in the early stages and there is definitely risk investing here. It's likely still years away from being profitable and no one can predict the future. It has a lot of promise, but as always, don't put money into it that you can't afford to lose... and definitely don't count on those 70,000% gains.

I hope this article has provided some value to you and helped you out some. As always, let us know what you think of these picks in the comment section below. Should you get in on this opportunity? Are 70,000% gains really possible?