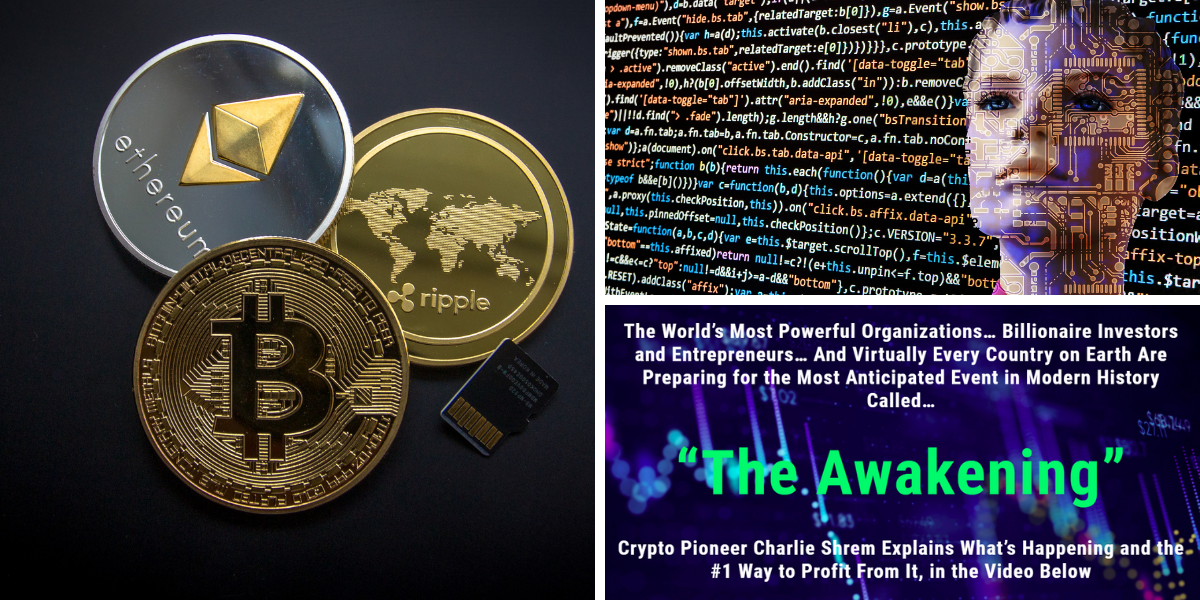 Altcoins are the fastest growing cryptocurrencies in the world and perhaps, one of the only financial instruments that can legitimately claim profits of over 300,000% in just a few months. However, cryptocurrencies are also one of the most volatile and risky markets, which attracts plenty of short-term minded speculators seeking to cash out big.

Enter Charlie Shrem – one of the biggest advocates of bitcoin and altcoins in general. Charlie is a controversial figure in the financial industry. He has teamed up with Matt McCall for his latest marketing ads that promotes investing in altcoins, “The Awakening” Event. In his marketing pitch, Shrem talks about an event that will be bigger than anything in the past and, will, allegedly, be “the biggest thing since the mass adoption of the Internet”.

He boldly claims that “buying an altcoin is like buying an early stake in the software programs that made the Internet so revolutionary”, To make his pitch sound more convincing, he says that altcoins are the only place you’ll be able to capture extraordinary gains like … 15,455%, 132,712%, or even 262,195%.

In his marketing ad, “The Awakening”, Shrem also teases four cryptocurrencies or altcoins that will, allegedly, make you become a millionaire in less than one year. Before seeing exactly how much truth there is to these claims, here is everything you need to know about the author himself.

Who is Charlie Shrem?

Charlie Shrem IV, born in 1989 is a young investor and financial analyst. He’s an American entrepreneur and bitcoin advocate and one of the founding members of the Bitcoin Foundation. Its also worth noting that he did get sentenced to prison for two years back in 2014 for “aiding and abetting the operation of an unlicensed money-transmitting business related to the Silk Road marketplace”.

After being released in 2016, he founded a cryptocurrency advisory by the name of CryptoIQ and started becoming a regular at bitcoin industry events. He continues his career as a cryptocurrency advisor and business developer and he was also featured in The Rise and Rise of Bitcoin, a documentary about the most famous altcoins that premiered in 2014.

As you already guessed, Shrem is not only trying to get you to subscribe to his newsletter program but also urges you to invest in cryptos and enjoy the life of a millionaire, promising you gains of over 260,000%, if you invest in the right crypto coin, which is what Altcoins are at the end of the day. The term “altcoins” simply refers to all cryptocurrencies other than Bitcoin.

The popularity of altcoins have kept on rising throughout the financial market’s ups and downs in the past 10-12 years. Currently, there are almost 7,000 cryptocurrencies that are being traded with a total market capitalization of over $200 billion. You are likely already familiar with more famous cryptocurrencies such as Bitcoin and Etherium, as we have covered cryptocurrency related teasers here before – Bitcoin Master Class and Crypto 66. But Shrem mentions two altcoins in his “The Awakening Event” Tether (USDT), and Tezos (XTZ).

The first altcoin mentioned Tether, is one of the more controversial on the market. It is a blockchain-based cryptocurrency whose cryptocoins in circulation are supposed to be backed by an equivalent amount of traditional fiat currencies…except it was revealed that apparently only about 74% of outstanding Tether coins were backed by cash and short-term securities. As for the second altcoin being promoted – Tezos. It is a relatively newer coin, initially released in June 2018. It has done some notable things since then, such as teaming up with Microsoft to support start-ups in India and seems to be genuinely interested in contributing to the blockchain community.

Overall our stance remains the same, that the cryptocurrency market is one of the most volatile in the world, which means you can enjoy big gains in the short term but also experience loss from one day to another. It is a highly speculative and competitive market, so unless you’re a professional trader or have a solid working knowledge of cryptocurrencies, we wouldn’t advise you to make a larger wager on altcoins.

What is Charlie Shrem Teasing?

“The Awakening” is more of a market pitch for an event that was supposed to be a big revelation at the end of September, which, similarly to many others before created by other financial advisors, failed to provide much substance.

The newsletter is more of a long advertisement for Shrem’s paid product, the Crypto Investors Network, where he mentions the names of four of his favorite altcoins right now that will, allegedly, help you earn big money if you decide to invest in them in the upcoming months. There isn’t too much information provided about them throughout the newsletter, so here is everything we were able to uncover:

Shrem also talks about blockchain programs that make “all transactions unalterable and transparent”, and goes on to mention companies like Ripple (XRP) and Tierion (TNT) that are working to solve some of today’s biggest problems and challenges in the financial field, including fighting cyber hackers and making transactions 100% safe.

Medibloc (MED) is another blockchain company he mentioned, saying it “is rewriting the way our personal information is stored and shared across numerous healthcare and insurance companies”.

At the end of the letter, Shrem also talks about artificial intelligence (AI), “a $15 trillion-dollar megatrend” that will change the world as we see it today. He mentions a company named Effect.AI (EFX) that “is using blockchain technology to quickly advance and organize this AI”. According to the author, its blockchain platform allows for AI developers to safely and securely collaborate and share data, which “speeds up the process on curing cancer, fighting world hunger, and accelerating space exploration”. He also mentions that the company’s coin price “has rallied as high as 816% this year”. Definitely some wild claims, which we thought you would enjoy hearing and get a kick out of as much as we did.

Are Altcoins A Good Opportunity?

Without too much information about the four crypto coins being teased by Shrem, we cannot tell you whether or not they make good standalone investments. As previously mentioned, our main concern is the altcoins’ market volatility and high-risk coefficient, which cannot be put into prediction systems to identify their trajectory given both their newness and inherent nature as alternative virtual currencies.

In other words, investing in altcoins can potentially bring you high returns of over 1,000% in just a matter of days as the author claims, but you can also lose the same amount just as quickly or even quicker. The market of altcoins is fascinating right now and probably one of the only ones in the world that can turn someone into a millionaire overnight… or at least over a few nights.

However, those with little investment knowledge shouldn’t be ploughing into altcoins hand over fist at the present time. Altcoins will likely continue to grow in viability as more companies expand their online selling platforms to receive alternative payment methods in the form of cryptocurrencies and as alternatives to fiat currencies are increasingly sought, so the altcoin trend is still in its early phases.

Do you own any cryptocurrencies? If so, which ones? Do you think they are a viable long-term alternative to fiat currencies? Let us know in the comments below.