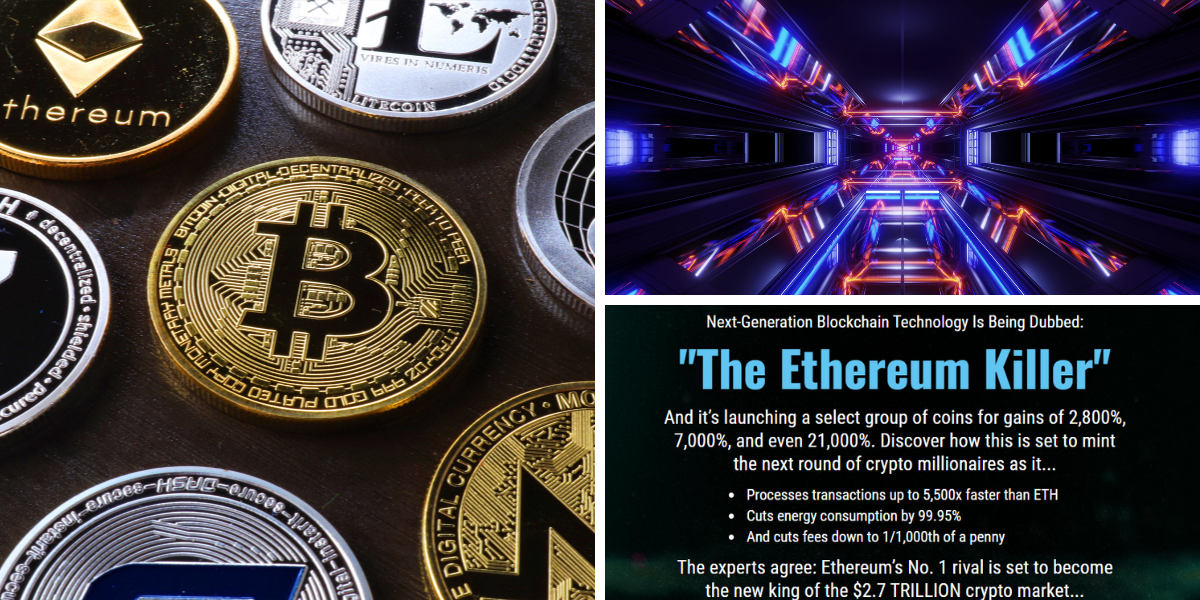 The Ethereum crypto coin isn’t looking so hot right about now, with its price down more than 70% since the start of the year.

Thus the timing of next-generation blockchain technology launching a new set of coins that among them includes an “Ethereum Killer” couldn’t be better and Jason Williams is here to tell us all about it.

The massive upgrade that’s coming to blockchain technology is several generations ahead of Ethereum and its set to take over the trillion dollar crypto market.

Jason Williams started out as an investment banking analyst at Morgan Stanley before departing Wall Street to bring the same strategies to main street that he used to help the ultra wealthy stay that way. We have seen and reviewed several of Jason’s presentations here Green Bull in the past, including his “Newton Battery” Company and something called “Electric Glass.”

Bank of America calls this “the Visa of the digital asset ecosystem.”  Others are even calling it the “Ethereum Killer”, so what makes it so much better than ETH?

Well, one of, if not the primary reason that Ethereum has become one of the market’s leading crypto coins is simple. It’s all about the blockchain, a distributed ledger of peer-to-peer transactions registered as “smart contracts.”

With its precise verification, incorruptible nature, and decentralized structure. Its heralding in a whole new banking system without lenders, central banks, or middlemen. In short, it holds the potential to transfer power from Wall Street to the everyday investor.

Once upon a time, Ethereum was said to be at the forefront of this all. As the cryptocurrency that would inevitably bring this disruption directly into our everyday lives. But the truth is, as time has gone on its lack of scalability has become apparent to all. As just a few examples:

The distributed ledger technology we’re talking about today is in the midst of upgrading to smart contracts. Which are…

This is why select coins behind the “Ethereum Killer” smart contract technology are going to be the next big winners in the crypto space and Jason has identified not one, not two, but three such coins.

Jason has compiled details on all three of these future crypto kings, including their names, ticker symbols, and the full story on each. They’re inside of a new dossier called: “The ‘Ethereum Killer’: Profit From the Next Trillion-Dollar Coins”

The dossier is included in a subscription to The Wealth Advisory, along with two other free, exclusive bonus reports, 12 monthly editions of The Wealth Advisory newsletter, VIP access to private archives, weekly market updates, and more.

This smart contract upgrade to the distributed ledger system will take it from a system behind crypto coins to the very foundation of every deal, transaction, and interaction in our lives.

It starts with something called “staking”. This refers to a way of earning rewards for holding certain cryptocurrencies. Think of it as the equivalent of locking up funds in a savings account, except that the yield we’re talking about here is much HIGHER.

Importantly, this requires virtually no additional computing power to pull off and the fees are negligible, so its a no-brainer. For example, you can get a loan without bureaucratic red tape or use your crypto coins to earn yields of 5%, 15%, or even more.

It’s a big reason why decentralized finance (DeFi) is growing at such an exponential rate. From only $1.5 billion in 2020 to $100 billion a year later. That’s an 88x growth surge! Smart contracts are also at the forefront of the non-fungible token (NFT) space.

In fact, this is the first real-life application of blockchain technology. As its a way of confirming ownership of an asset, like a title, deed or certificate of authenticity without a middleman charging a fee. While the first use case of NFTs was in digital art. NFTs can work for any kind of asset, be it digital or physical. Memorabilia, fashion, real estate, even scientific articles, and patents.

It’s still very early in the game on all this stuff, but Jason insists that the real opportunity lies in the cryptos behind the NFTs. Particularly the “Ethereum Killers” he’s presenting here today. Let’s try and find out what these are.

For his No.1 Ethereum-killing crypto, Jason provides us with a few clues:

Based on these pointers, Solana (SOL) is the Ethereum killer. Here is how we know:

As for the other two coins that Jason is watching, not a single detail was provided on either of them unfortunately.

Solana currently has a fully diluted market cap of over $17 billion. Is this all pie in the sky projection or is there some substance to this figure?

The price of SOL, just like many other coins is a function of its market cap divided by circulating supply. If the circulating supply increases over time (which it will), then the price will also fall. Unless real, tangible value is created of course.

This is where Solana’s utility becomes evident, as it enables basically instant transactions and scalability of up to 50,000 transactions per second. Which is far and away better than Ethereum, XRP, and other comparable platforms. Thus its easy to see its protocol being adopted by individuals and institutions alike. As of January 2022, the Solana ecosystem consisted of roughly 1300 projects and growing.

However, Solana is not without its own set of flaws. Namely, its lack of decentralization. With the blockchain relying on a central agent – The Solana Foundation. That said, it deserves a spot in a diversified crypto coin portfolio.

What are the other two so-called “Ethereum Killers” in your opinion? Let us know what you think in the comment section below.