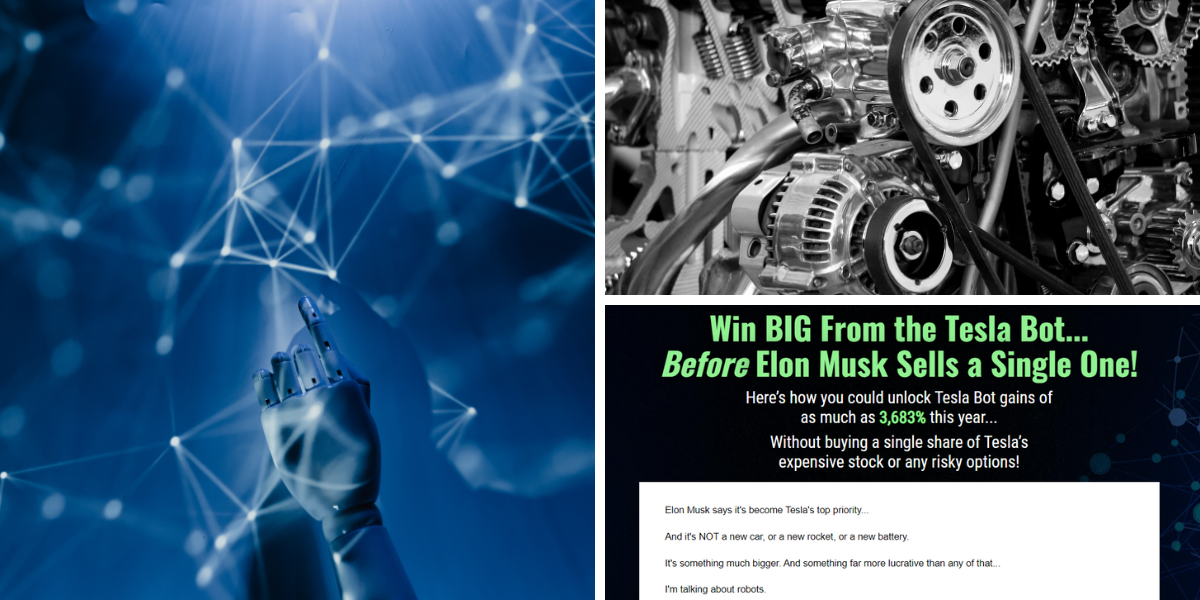 Elon Musk calls it Tesla’s top priority and it’s NOT a new car, rocket, or a new battery.

According to DIY investor Christian DeHaemer its something bigger and far more lucrative than that. He’s talking about robots, more specifically “Tesla Bots” and we are going to learn how to profit from them without having to buy a single share of Tesla’s expensive stock or dabble in risky options.

Elon Musk predicts that robots will be “more significant” than Tesla’s entire vehicle business. This is why he’s setting out to dominate the robotics market, just like he did with electric cars and energy storage batteries.

Christian DeHaemer is Angel Publishing’s veteran financial analyst. His self-admitted specialty is finding emerging technologies that are changing the core of our economy and we’ve reviewed some of his ideas here in the past, including “A Tiny Company Solving America’s Biggest Crisis” and his and Dave Roberts’ Spatial Computing Company.

This presentation is along the same lines given the robotics market theme.

It starts out by introducing us to the Tesla “Optimus”, which looks like something out of a science fiction flick, but this robot is being developed as we speak.

The Optimus is being marketed as a personal servant that performs simple errands and tasks like taking out the garbage and cutting the grass. We could learn some more details on September 30th, which is the date of Tesla’s second annual AI day, as Musk has previously stated that “they may have an Optimus prototype working by then”.

The focus on robots is justified. Right now, robotics is ‘just’ a $38 billion industry, but by 2030, the industry is estimated to be worth $500 billion. A 1,215% increase in less than a decade! So its not that far-fetched to see robots become a “more significant” industry than automobiles over time, which is currently a$3 trillion industry.

But according to Christian the biggest profits won’t come from buying stock in Tesla or even buying Tesla options. The real profit potential is “hidden much deeper beneath the surface”, in a tiny company that 99% of investors don’t even know exists.

This firm could be the perfect partner Musk is looking for and DeHaemer has prepared a complete write-up on it called: How to Score Tesla Bot Profits Before Elon Musk Sells a Single One.

The Tech Rollout of a Lifetime

If Elon Musk wants the Tesla Optimus to be his next game-changing success, there’s one piece of tech that is mission-critical. Otherwise his robots’ full potential won’t be realized.

Have you ever wondered how you’re able to stand upright? Or how you’re able to keep your balance while riding a bike? Its actually not because of our eyesight, but thanks to our inner ear. Unbeknownst to most of us, our inner ear houses critical components that not only gives us our sense of balance, but also a sense of orientation. Like knowing whether we’re upside down, right side up, or sideways. Its all quite complex.

Well, the Optimus needs an “inner ear” to function properly just like we do. The only problem is, this part of our biology is extremely hard to emulate.

But after decades of work, millions of dollars spent on R&D, and the filing of over 27 patents. One little company has pulled it off. It doesn’t look like much:

So its hard to believe that this tiny sensor is the single-most important component of the $500 billion robotics revolution.

It’s what will give robots their sense of balance and orientation, just like humans and importantly also move with impeccable accuracy. Experts such as the Institute of Electrical and Electronics Engineers have even confirmed this by stating that: “These sensors are gaining importance as a means for improving dead-reckoning accuracy in mobile robots.”

Thus, if Elon Musk plans to put an Optimus in every single home and totally dominate the robotics industry. He’ll need hundreds of millions, if not billions of these “inner ear” sensors.

The company Christian is teasing here has developed the most advanced “inner ear” sensor around and its technology is proven. Let’s find out its name.

A few facts about this mystery supplier were sprinkled throughout DeHaemer’s presentation. Here is what we were able to pick up:

Based on this info, the conclusion is that KVH Industries Inc. (Nasdaq: KVHI) must be the mystery sensor supplier. Here’s why:

The Best Way to Play the Robotics Revolution?

This presentation by Christian DeHaemer is highly speculative.

First off, Tesla is NOT a present KVH Industries customer. Christian states if this company were already with Tesla, the stock would already be at $50 or $75 or $100. While it is not merely wishful thinking, as KVH is qualified to be a potential supplier, so are some other firms.

Second, some examples of present customers it turns out aren’t even customers. Like Amazon and Boston Dynamics. Only potential customers that KVH is targeting for their Autonomous market segment.

Lastly, while the markets KVH supplies are expansive with plenty of room for growth. The reality is the technology supplier is still a sub-$200 million a year business that hasn’t been profitable in any of the past five years. In the same vein, it isn’t a high growth startup either, having been around since 1982.