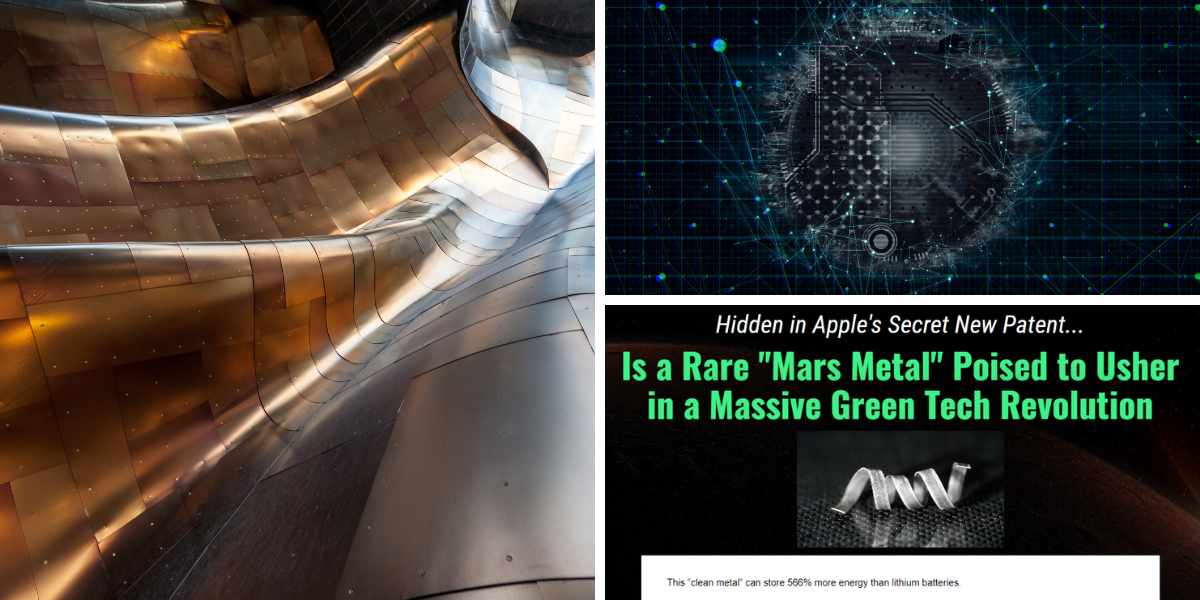 Tech giant Apple holds more than 24,000 patents in all, but its latest battery patent has gotten Christian DeHaemer’s attention.

This is because its forthcoming batteries will be made out of a metal unlike anything else we’ve ever seen before. A rare earth “Mars Metal” breakthrough 82 years in the making, with the potential to turn every $1,000 invested into nearly $44,280 in the coming months.

Christian claims that this “clean metal” can store 566% more energy than lithium batteries, putting it at the center of the biggest renewable energy, tech, and automotive revolutions happening around the world.

We have become intimately familiar with the work of contrarian analyst and writer Christian DeHaemer here at Green Bull, covering past presentations such as the “Tiny Company Solving America’s Biggest Crisis” and “End of Bitcoin” teaser in depth.

If we take a closer look at Apple’s new battery patent, No. 0043926  and I mean really closely, we’ll see that the U.S government cosigned it:

See, everyone at the highest levels of government, from the military to Congress to even the President knows that the “Mars Metal” has properties unlike any other metal involved in the explosive green revolution. For instance:

Thus it was with this metal in mind that Biden recently signed an executive order mandating that America slash its carbon emissions by a whopping 65%. This means that over the coming years vast swathes of American industry will be forced to switch to renewable energy, zero-emission vehicles, and green construction materials, pushing this “Mars Metal” onto center stage.

The bottom line: The “Mars Metal”, which is just a code word for Magnesium, is the world’s first and ONLY “green” metal that’s poised to drive the growth and adoption of green tech in America. Experts like the world’s leading metal information provider seems to concur with this assessment, saying it’s poised to explode into a new trillion-dollar industry.

Christian thinks this “could be the biggest investment opportunity of 2022” and there’s one company that’s trading for less than $1 that’s behind this explosive technological breakthrough.

DeHaemer has put together a complete, no-stone-left-unturned investor’s report with the full scoop on this company. It’s called: “The ‘Mars Metal’ Age: Profit From America’s First and ONLY Green Magnesium Play”.

This report is “free” if you agree to test-drive Christian’s flagship research service, Launchpad Trader for “only” $1,999! In addition to this report, you’ll receive at least one actionable trade idea every single week, three bonus reports, a 90 day money-back guarantee, and more.

We should start this by saying that there have been no new developments in magnesium production for 82 years! So a little (or a lot) of skepticism is wholly warranted.

Yet an all-American company has apparently single-handedly revolutionized magnesium production. This is a blueprint of a proprietary method called the “continuous silicothermic process”

It sounds complex, but the long and short of it is that it’s managed to solve the two biggest problems stopping magnesium from taking over the reins from steel, titanium, and lithium.

The first problem it has solved is cost. In order to make pure magnesium, you need a lot of heat to support the chemical processes required to strip away other minerals. At an industrial scale, this becomes hugely expensive. To solve this, our sub-$1 firm created a “closed system” innovation, which means it’s able to capture the vast majority of the heat it produces and channel it back into production. The end result is that it’s able to dramatically bring the cost down.

The second problem it has solved is “the big one” – emissions. This green company still needs to make heat and that typically requires burning some kind of fossil fuel like gas. Well, we’re told this is where this company has innovated again, as it has developed and uses advanced carbon-capture technology. This not only stops carbon leaving its factory, but also ensures that its way of making magnesium is virtually emission-free.

So in the end, not only has our mystery company solved the pollution problem of creating magnesium, but it’s also found a way to make more money by doing so, as a result of taking byproducts and selling them on to other companies. Let’s find out the name of the company behind this technology.

Here’s a little bit of what we know about this magnesium play:

Based on this info, the company Christian teases here is Western Magnesium Corporation (OTC: MLYF) Here’s how the clues line up:

This is an early-stage speculation if there ever was one. Western’s first commercial plant, which was secured last August is not as yet in production, with the initial expectation being that it would break ground in the next eighteen months or by the end of this calendar year.

The company notes that its proprietary methodology will, on a global scale, “produce a very cost-effective and environmentally friendly magnesium in the market.” Meaning that it has not proven this capability as yet. It also does not help matters that Western Magnesium is still pre-revenue, let alone any income, with plenty of outstanding options, warrants, and some debt as well.

An easy pass for us for all of the above reasons.

Will Western’s purifying magnesium metal tech work at scale? Let us know what you think in the comment section down below.