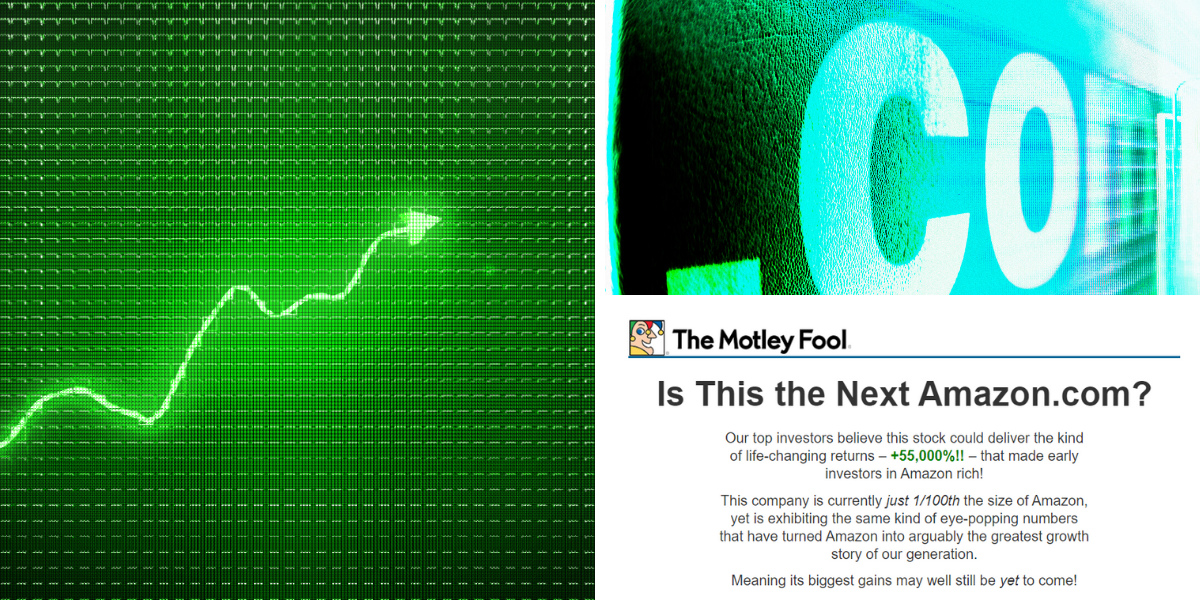 Recently there have been some people asking about Motley Fool's "the next Amazon.com" stock, and so I decided I'd look into it and expose the stock being teased if possible.

If you're wondering what they are teasing then you're in the right place. In this quick review I'll be going over some of what we are told as well as exposing their pick.

One of the teasers I came across is shown here, which is aptly titled "Is This the Next Amazon.com?"...

I've also seen some teasers where The Motley Fool has been claiming that "this stock could be like buying amazon in 1997" and making similar statements.

And let's be clear here... a stock that is comparable to buying Amazon back in 1997 is one heck of a stock... considering Amazon (AMZN) was trading at only $18 a share when it went public back then and is now trading at well over $2k a share.

I've also seen statements by them that this stock is what they call a "total conviction" buy sign.

Tesla, Copart, and Netflix are other stocks that have had "total conviction" buy signs, and what they seem to mean by this is that both David Gardner and Tom Gardner have both agreed on the pick twice over the years.

In case you don't know, the Gardner brothers are the founders of The Motley Fool, and they both make stock picks separately with their own strategies... and when they end up recommending the same stock then it's likely a really good sign. They have a bunch of fancy names for different pick situations, such as "ultimate buy alert" and "home run buy"... but this total conviction lingo might only be used when they both agree on the same stock twice... but I'm not completely sure.

*It's also been called a "double buy signal".

Various types of these "next Amazon" teasers have been around for quite some time, evolving over the years, but one thing hasn't changed... they are really, really hyped up.

Of course the thought of buying the next Amazon is already quite a loaded statement... I just mentioned how much Amazon has risen since coming public in 1997... and in the one teaser for this opportunity that The Motley Fool is promoting they claim that the last time they saw a stock on this type of path they saw it go up over 500%.

So does this mean you should expect this stock to rise 500%? Well, let's not forget this is all a sales pitch.

If you're familiar with The Motley Fool then you probably know how this all works, which is the same every time and seems to be the same way just about every investment advisory service lures in new subscribers.

What they do is tease some amazing new stock pick, in this case "the next Amazon.com", and they have a report that goes over all the juicy details on the stock. BUT, in order to get your hands on the report you first have to subscribe to one of their advisory services. This is also what we saw them do with their "#1 Pot Stock" teaser.

In this case they are pushing their Rule Breakers advisory service, which costs $299/yr but it's usually discounted to $99/yr.

Okay, let's get to the point here and go over this stock they're teasing.

As mentioned, there have been a lot of similar teasers over the years, so they may have teased more than one stock as "the next Amazon.com". I'm exposing the one they were teasing in the promotion I landed on.

The clues given about this company include: 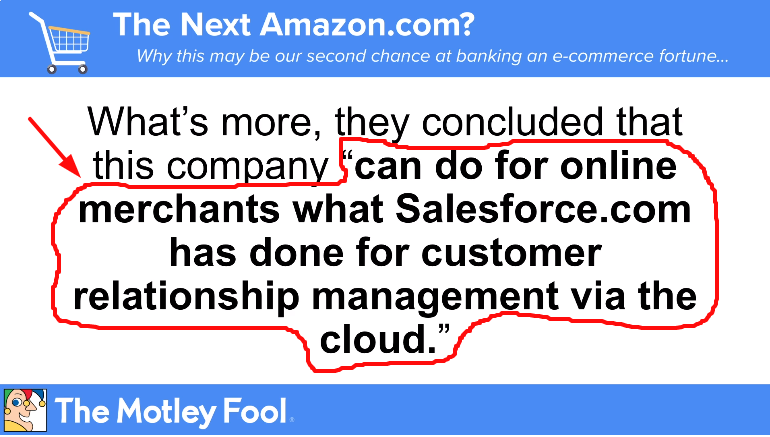 ... and there were some other minor hints thrown in there. But I don't need them.

What they are teasing here is Shopify (SHOP), which I'm already familiar with and I already know they are big fans of the company over at The Motley Fool.

Shopify (SHOP) it is.

*If there is another stock they are also teasing as "the next Amazon" or something similar, let us know in the comment section below!

The stock certainly isn't cheap, but there are still many proponents for buying it.

Shopify is a solid company that has seen good revenue growth over the years, and it's nice to see that they are investing in growth and not so much focused on earnings.

But is it the next Amazon.com? It certainly doesn't seem likely.

And there you have it! Hopefully this review has provided some value to you.

Be sure to let us know what you think of this pick in the comment section below. We like hearing back from our readers!