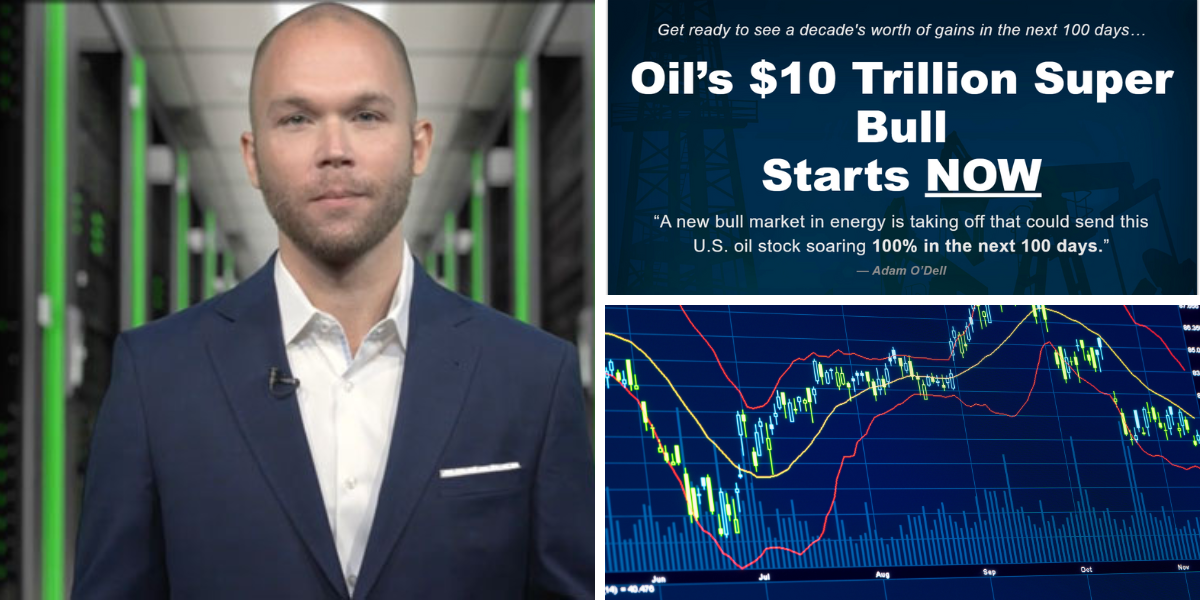 After decades of being on the back burner, a $10 trillion super bull market in energy is now underway.

Crude, black gold, texas tea, whatever name you call oil, one thing that can’t be disputed is that it’s the lifeblood of our global economy.

Adam O’Dell is the Chief Investment Strategist of Money & Markets and he’s been publishing his trade recommendations online since 2012. We have reviewed quite a few of these here at Green Bull, including his “Infinite Energy” Software Pick and “x.AI” Stock.

Once upon a time, the richest people in the world were primarily energy entrepreneurs. John D. Rockefeller, John Paul Getty, and others regularly topped rich lists and Adam believes history is about to repeat itself.

We already have some confirmation of this, because oil is up BIG over the last year. Exxon Mobil has shot up 78%, hitting an all-time high in the process.

And some smaller explorers are up even more.

These gains are great on an absolute basis and they far outperform the broader S&P’s negative 20% return in 2022.

But What About Inflation

In a short video clip from a private team meeting, Adam stated the North Dakota-based oil stock he has his eye on, is not some dubious IPO. It’s not a complicated option trade. And we don’t need to use any kind of risky leverage either. It is an ordinary oil stock that we can take advantage of right away.

This is all well and good, but what about inflation? Will this new bull market in oil continue even with, heaven forbid, higher inflation?

Wells Fargo recently did a study where they looked at 15 major asset classes and studied how each one did during high inflationary periods. The study goes all the way back to the year 2000.

What they surprisingly discovered is, crude oil outperformed all other asset classes, jumping as much as 40% during high inflationary periods.

Bottom line: Oil still has plenty of room to run and one stock, in particular, will outperform the rest during this boom.

Adam has put everything we need to know about this oil stock in a new report called Energy Fortunes Uncovered.

To access it, we’ll need a subscription to Adam’s new stock-picking research service, 10X Stocks. Besides the special report, the $995 cost to join gets us access to a private members portal where we can review the model portfolio at any time, real-time trade alerts, and more.

The Case for Crude

Not only this, but even after 2022’s gigantic run-up, oil is STILL showing the most attractive prices in decades.

From this, we can derive two things:

So, we may be long overdue for a massive bull run in oil.

Some big banks are on board with the idea of an oil boom as well. For example, Bank of America says oil could hit $200 and JPMorgan is projecting oil at $380. Goldman Sachs is also calling for a 10-year bull market that will send oil prices to the moon.

Under such a scenario, oil would shoot up to $500 a barrel. How likely is this to happen?

Given the confluence of factors at play:

There’s a solid case to be made for a bull market in oil BIGGER than any other oil boom before it.

Some “smart money” is also loading up on energy stocks. Warren Buffett’s holdings in the oil and gas sector now surpass $45 billion. Then there’s Carl Icahn, who bought 5.8 million shares in Southwest Gas. An amount totaling more than $440 million. And asset manager Steven Cohen has spent $104 million on shares of First Energy Corp.

Here is what we know about Adam’s top energy stock pick:

Based solely on the info we have on hand, Northern Oil and Gas, Inc. (NYSE: NOG) appears to be the pick. This is why:

What this means is that it acquires minority positions in high-quality acreage that is about to be drilled by other operators. This model enables it to earn high internal rates of return on capital.

Combine it with financial liquidity and asset diversification, and NOG is on to something. The long-term strategy in the producer’s own words is “to capture and participate in only the highest-return opportunities across premier US oil and gas basins”, which sounds lucrative.

The safest play in oil and gas is royalty trusts, where all you have to do is sit back and collect a dividend check every month during the productive life of an asset. The second safest is owning a non-operator that owns working interests in producing wells and properties. NOG fits the latter profile and it is currently available at an absurdly low Price/Earnings multiple of less than 4x.

Don’t really see the short-term catalyst for the stock to skyrocket as Adam says, but the mid/long-term prospects for appreciation are good.

Do you think oil will reach $500 a barrel? Tell us why or why not in the comment section below.