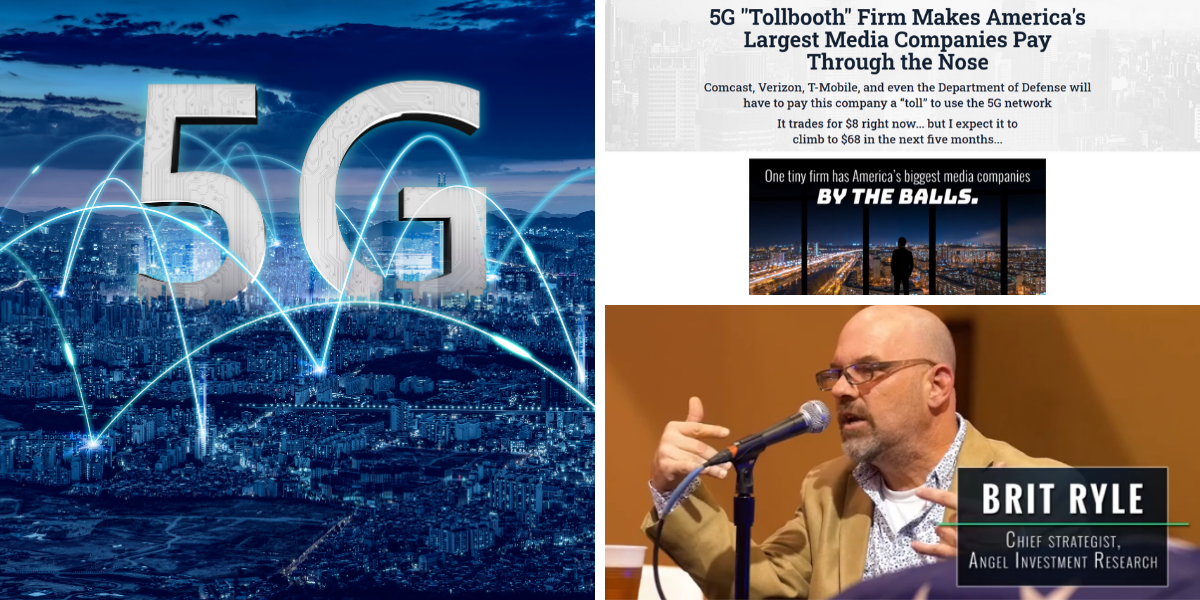 Briton (Brit) Ryle over at Angel Publishing has been teasing an opportunity to invest in some 5G "tollbooth" stock that supposedly is going to make everyone rich.

But, is this actually legit and what is the stock he's talking about?

Luckily for you, valued reader, in this review I'll be exposing the company he's teasing so that you don't have to buy into his subscription service just to find out.

"5G 'Tollbooth' Firm Makes America's Largest Media Companies Pay Through the Nose". That's the title of the presentation I came across, although there are probably others out there too... 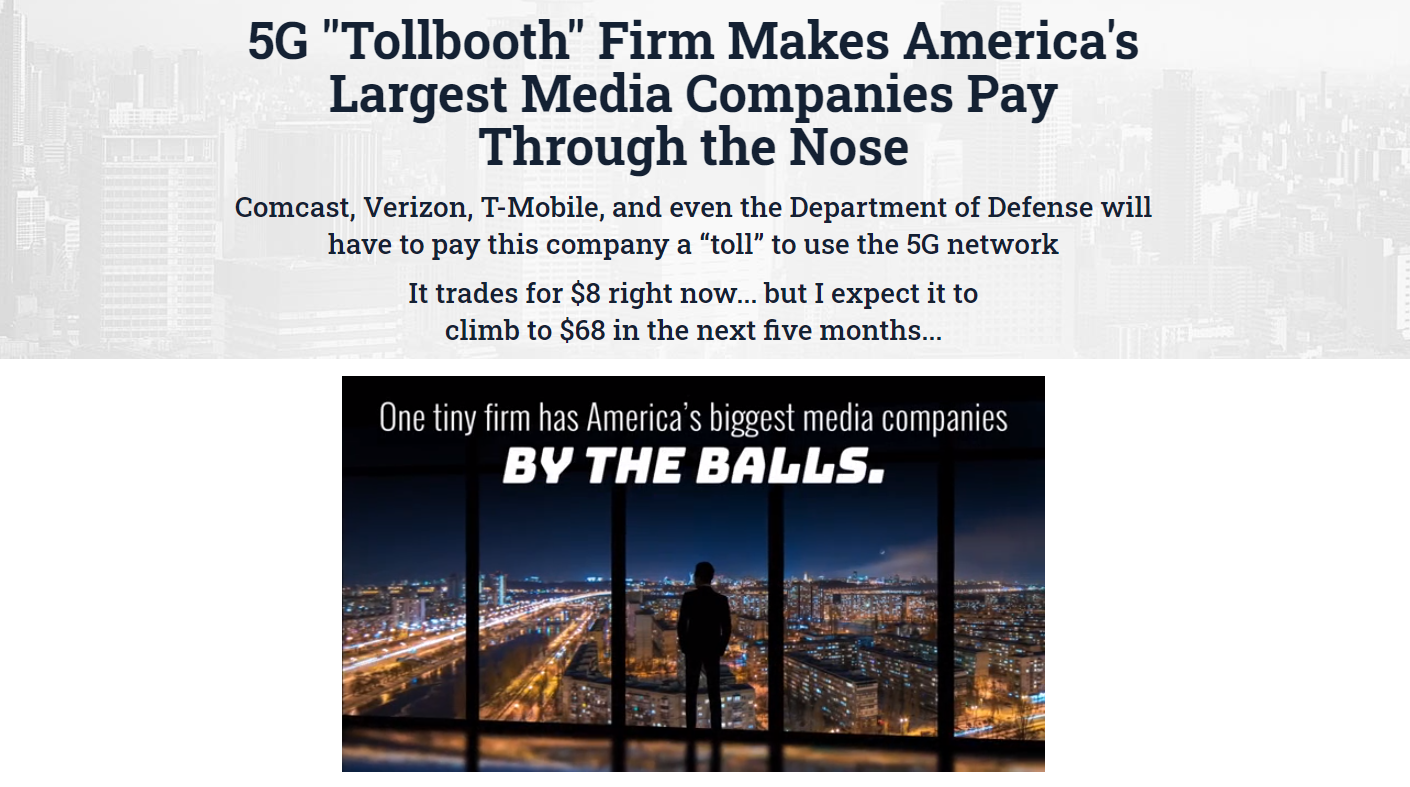 Briton Ryle is the guy behind it all. As we know, he is an editor at Angel Publishing, and has been in the newsletter publishing business for over 20 years, and currently runs some publications where he alerts subscribers to are dividend growth stocks and REIT's, but I'm not too sure of what his background includes before this (he doesn't seem to be some prestigous ex-Wall Street analyst or anything like that). One thing that is definitely worth noting, and that you're probably already aware of, is that Brit is an absolute hype master. He loves to hype up his investment opportunities to infinity and beyond (he's also the guy behind that misleading "prime profits" teaser).

As for this teaser, Brit claims that there is "one tiny firm has America's biggest media companies by the balls".

It supposedly is "leading the charge to 5G" and he assures us that "you've likely never heard this company's name".

Apparently not many people know this company exists, and because of this we can get in now for under $10 a share, but "prices are going to skyrocket".

He goes on to tell us that every single company that taps into 5G is going to need the service this company provides. This is because there supposedly is some special "key" needed to make 5G work and this small company "has a stranglehold on this asset".

Some of the more hyped-up claims thrown out there by Brit include:

It's going to make me rich is it?

At this point I was lost in fantasy dreaming about the future riches this opportunity is supposedly going to bring me.

Brit goes on to show charts from other 5G companies that have exploded in price, such as for Galaxy Next Generation (GAXY) and Ameristar (AMWK), hinting that buying into the stock he's teasing will take you down the same route.

However, what he doesn't tell you is that these are penny stocks that are hardly qualified to be called companies, and certainly wouldn't be smart investment opportunties.

Lots of hype.
Lots of bold claims.
And lots of talk that gets everyone dreaming about that new sportscar they might be able to afford or that dream vacation they've been putting off.

And, of course... the whole thing ends in the typical sales pitch.

Lucky for us, Mr. Ryle is true gent. He's giving away "free" copies of his special report that provides all the details on this company. It's titled Make 1,000% Gains From the 5G Tollbooth... 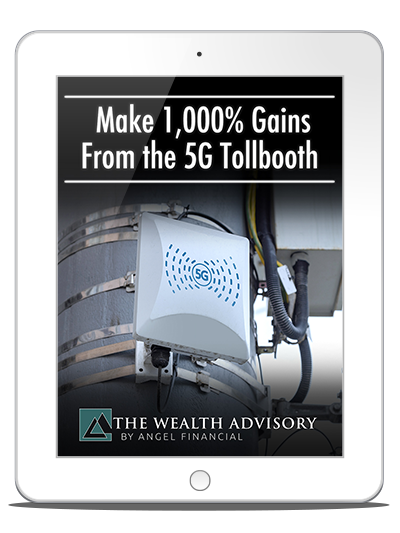 However, in order to get ahold of a "free" copy, you first must subscribe to his newsletter advisory service, The Wealth Advisory.

A subscription here will cost you $99/yr. Not too bad, but still... not free!

What The Heck Is a 5G "Tollbooth"?

Brit Ryle tells us that "any company that wants access to the 5G network will have to pay this company a toll to get connected".

This is why he calls it a "tollbooth" stock.

And the reason for this is because this company has the infrastructure that other companies will have to tap into in order to access the 5G network.

As was shown in the presentation, 5G signals don't travel very  far (only about 1,500 ft) and can't travel through solid objects. Here's a simple visual showing the difference between 5G and 4G signals...

In the early days of 5G being developed this problem looked like a potential roadblock, but now the solution is to simply put antennas for 5G just about everywhere.

There will be tons of tiny antennas relaying signals to your computers and phones... instead of just one large cell tower every 10 miles or so.

However, there will still be large cell towers and other infrastructure of past mobile communication networks.

The company being teased here is said to have an extensive nationwide fiberoptic network, and with this network already in place companies will just have to hook up the smaller antennas to the already existing network of fiber.

As we are told, it's "a simple plug-and-play move", and here's an image from the teaser that shows its coverage... 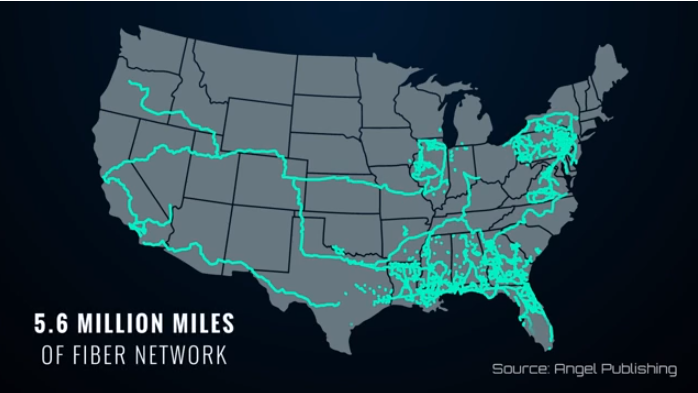 So, what is the stock that's going to make you rich? Which is the ticker you need to know so that you can buy that private yacht at this time next year?

Well, let's look at the limited number of clues we were given in the teaser:

Unfortunetly so. Fortunately however, it is enough to piece together this puzzle.

The company he's teasing, and I can say this with confidence, is...

... Uniti Group (UNIT), aka "the communications REIT". Uniti is a Real Estate Investment Trust in the realm of communications infrastruction, such as fiber and wireless towers, that is headquartered in Little Rock, Arkansas.

The clues match up nicely here, but some are a bit dated.

For example, Briton Ryle mentioned that this company has 5.7 million miles of fiber in laid-out in the US. This is true according to their LinkedIn page... 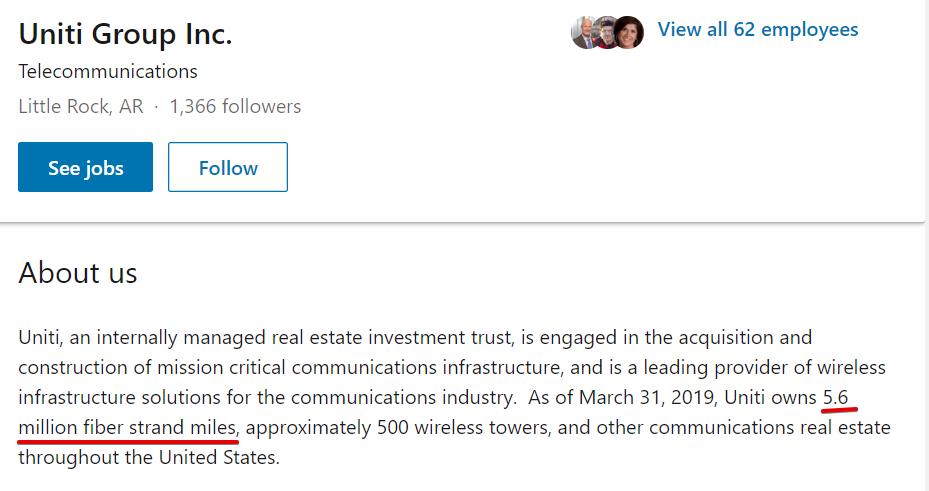 But like I said, this teaser is a bit old, so number like this are expected to change.

Uniti's stock does trade for less than $10 (at this time) and the big companies mentioned do pay "tolls" (rent is a better word) to use their extensive network of fiber.

And not only that, but the coverage map we were shown in the teaser also matches up with the one from the company's website... 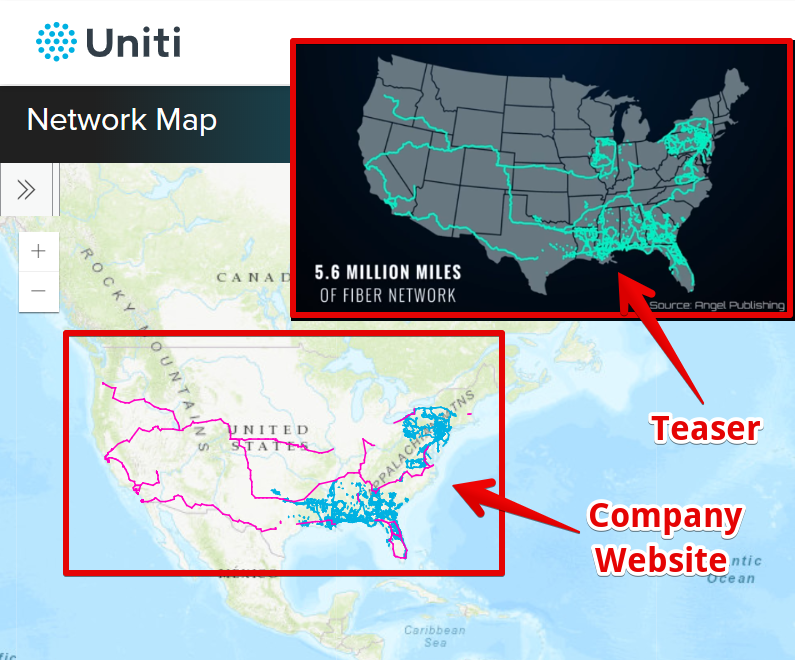 But, is this really going to make you filthy stinking rich?

Don't sign off on that new sports car just yet!

As always, the opportunities that are teased in these investment teasers are usually a bit of a disappointment, although they often do have good potential to some extent.

Uniti Group is an REIT, a prized-possesion by investors for those nice dividend payments. According to the company's dividend history, it provided a yield of anywhere from 1.8% up to 16.4% over the past several years... 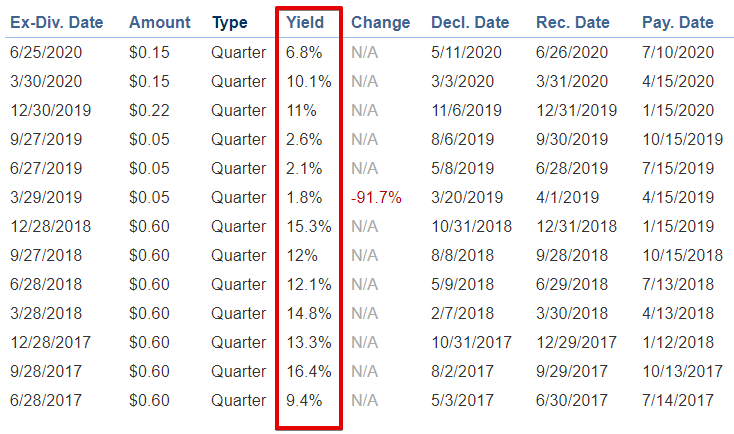 Not too shabby. However, the company has a lot of debt, with its debt/equity ratio being pretty high... not a great sign.

Furthermore, it's future isn't all that predictable. Uniti is actually a spinoff of the Windstream company. This spinoff happened in 2015 and the reason I bring it up is because Windstream has since filed for bankruptcy (in 2019), which has really affected Uniti - Windstream was their largest tenant and there were some issues with how much money was owed and whatnot. However, this case was settled in May of 2020 and helped to re-cement the ties between parent company and spinoff... but there is still some uncertianty with how things will play out.

*Also: Briton Ryle actually teased this company years ago back in 2016. He thought the stock would go to $30 back then. To say the least... followers of this recommendation were disappointed.

As always, do your own due-diligence before investing in any recommendations.

I hope this short review has provided value to you. As always, let us know what you think of this stock pick in the comment section below. We like to hear back from our readers!