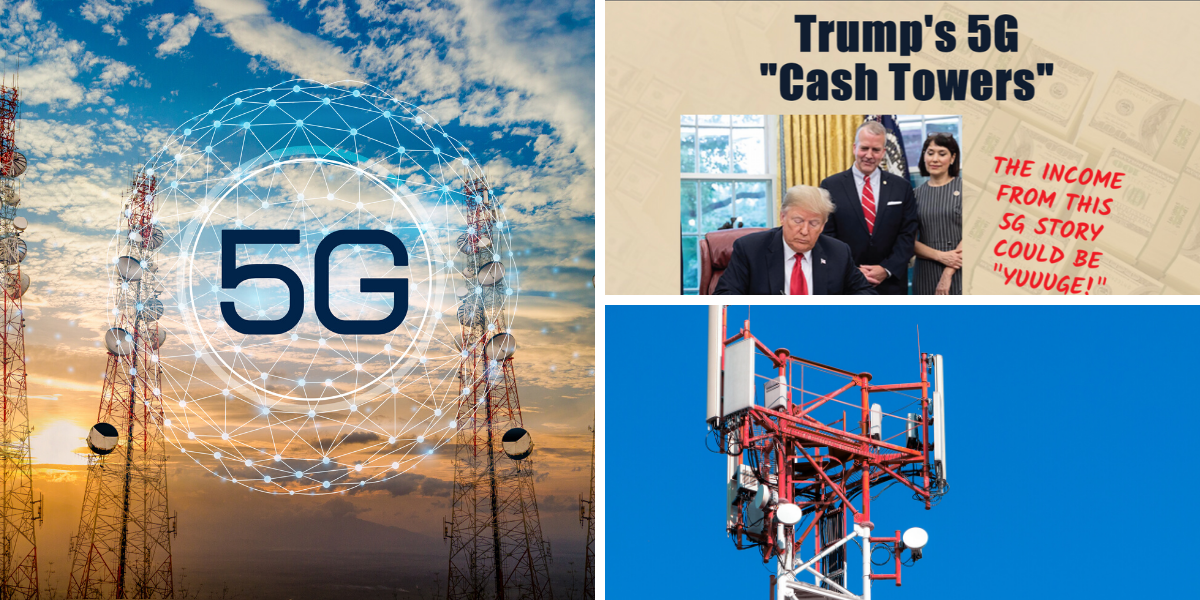 Zach Scheidt has been teasing this new opportunity to collect "5G Cash" a lot recently. He talks about "5G Cash Towers" and claims that Trump signed something to make this opportunity all the more lucrative for investors.

But what is he talking about and is this actually a legit opportunity? After all, things sound a bit fishy.

In this review I'll be going over what's really going on here and what this "5G Cash" is that he speaks of. Let's begin by going over the teaser...

There have been a handful of different teasers for this opportunity, three of which you can see here... 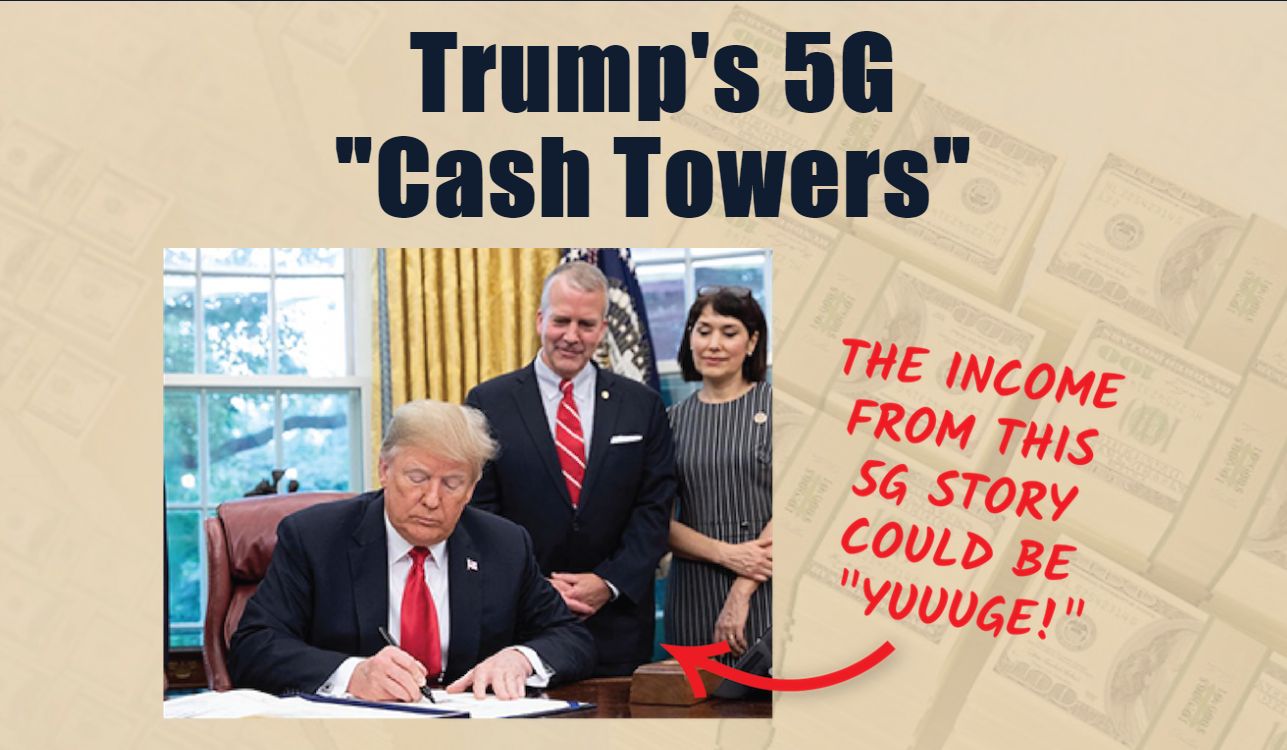 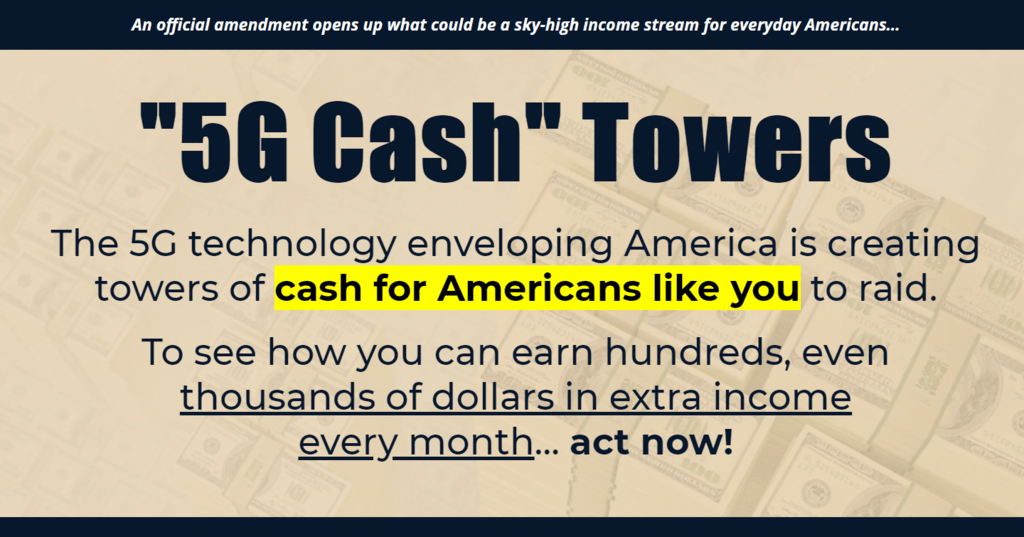 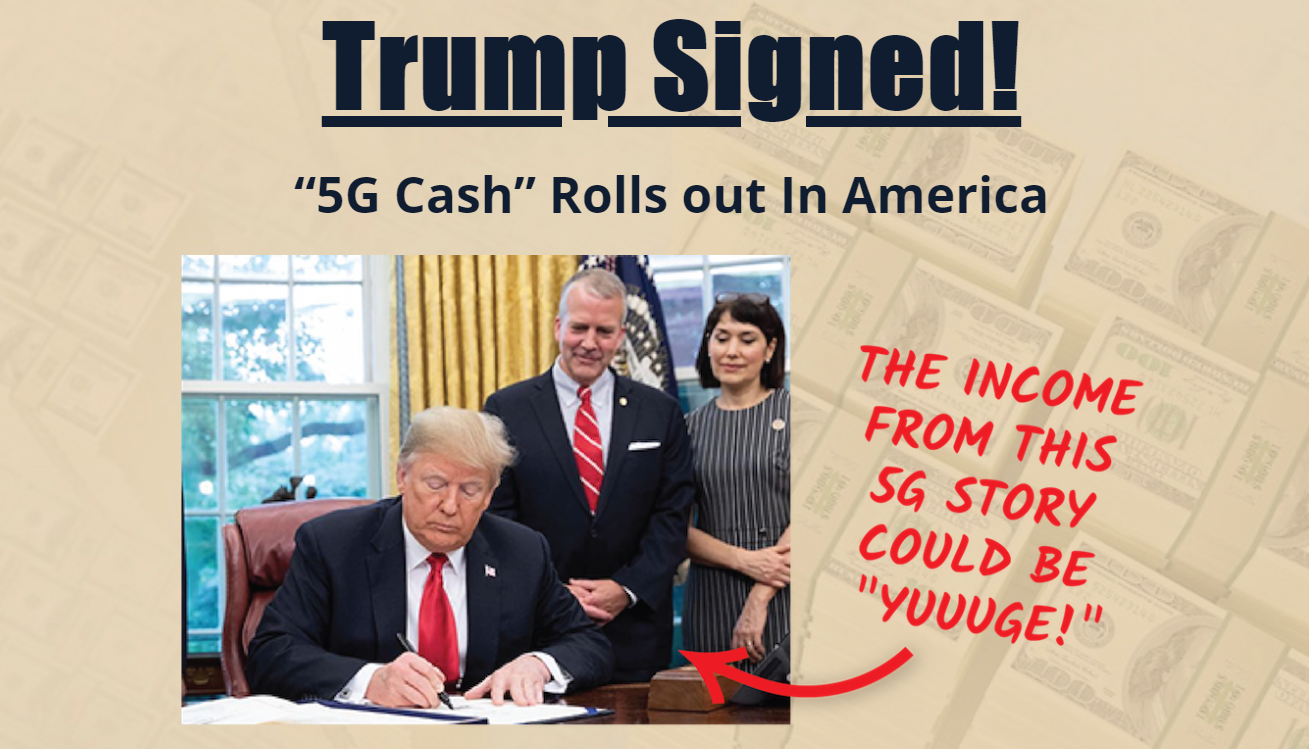 Zach Scheidt is the guy behind this teaser. He is a financial newsletter editor for both Agora Financial and St. Paul Research, where he runs newsletters like Lifetime Income Report, Income On Demand, Family Wealth Circle and others. Before all of this he worked as a cost accountant and managed millions of dollars for clients while working for an Atlanta-based investment advisory. Investment teasers like this are nothing new for him.

We've all heard about 5G at this point. It seems that just about every investment advisory is teasing this new technology in one way or another.

Yes, 5G is going to be huge. It's somewhere around 100x faster than 4G and the development of a lot of other technologies, such as AI, IOT, etc. are going to be hinging on it. Sure, there are some issues with it, such as the fact that it can't pass through solid objects like 4G can, but overall just about everyone is expecting it to take the world by storm and to bring in trillions of dollars to the world's economies in the coming years.

With 5G comes many investment opportunities, and according to Zach Scheidt:

He even goes as far as to say that "Americans who might have started out in life like you and me and are now enjoying celebrity lifestyles"... and goes on to talk about how you could be "eating at the best restaurants... pampering your boy at expensive spas... appreciating the arts".

Sounds great and all, but it also sounds a bit like a scam or something.

Why these teasers always have to be so darn misleading, I don't know.

It sounds a bit too good to be true, does it not?

Not only that, but after doing some digging around I was able to find out that the testimonials shown in the presentation are FAKE.

It seemed like half of the presentation was filled with testimonials from all these people that have supposedly been earning "5G cash", but as I'll show you now, the images are fake.

Below is a screenshot I took from the presentation that shows a man and a woman who both are said to have collected large amounts of this "5G Cash"... 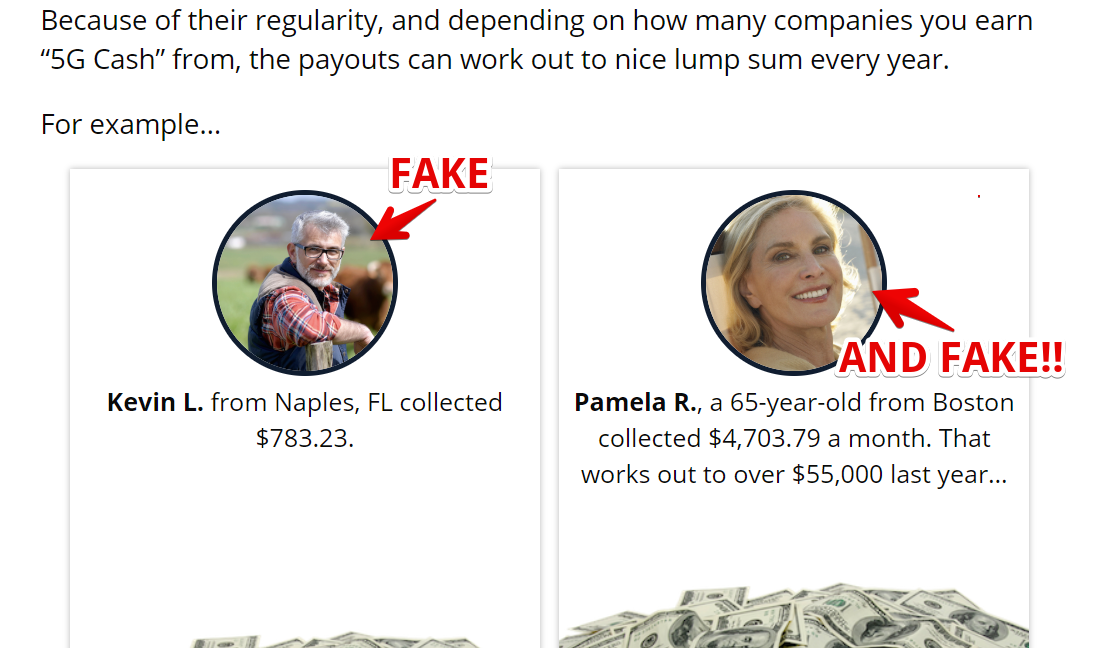 But, I don't know if you can trust any of this because I was able to find out there these images are just stock photos, meaning that anyone can purchase them online and use them as they wish. 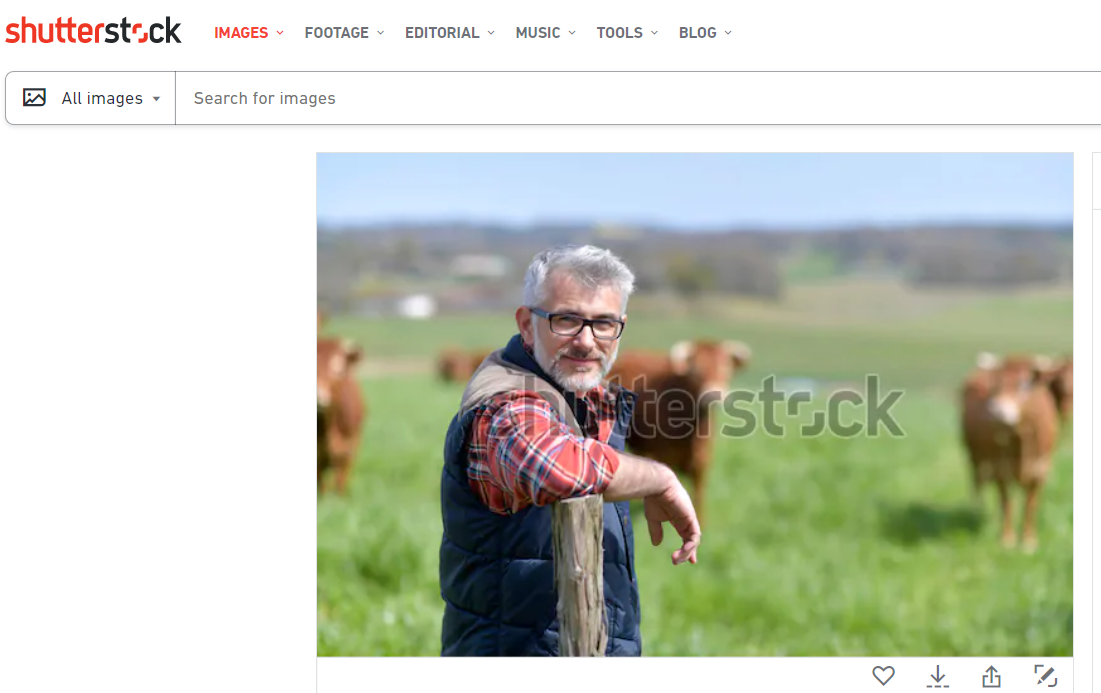 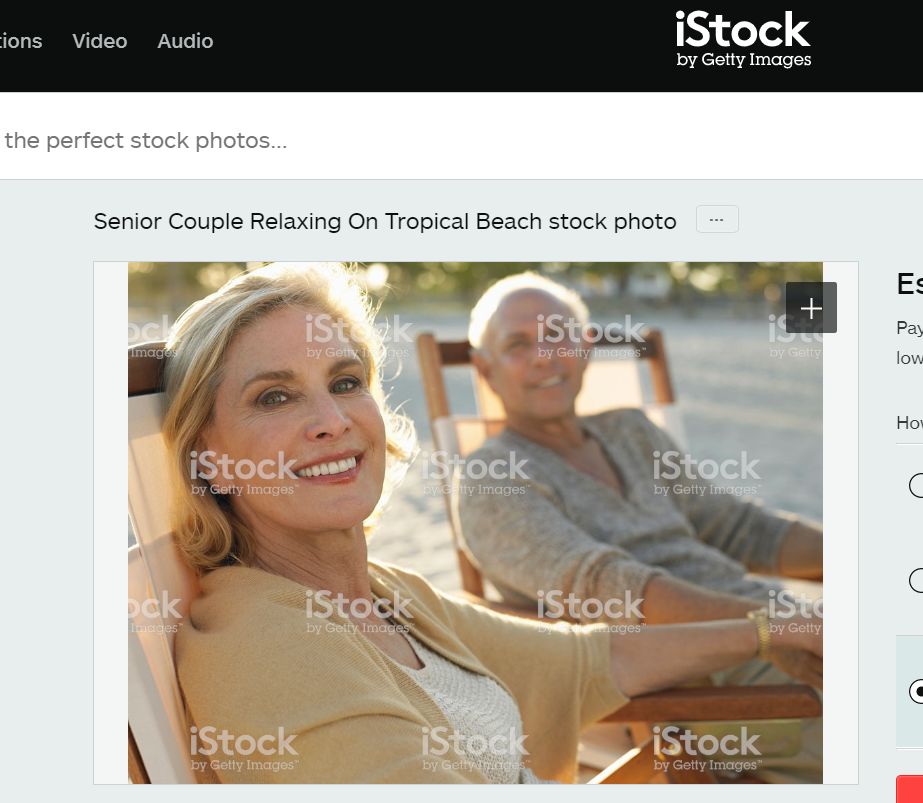 BUT, it sounds too easy. It just doesn't sound realistic... and the fake images we are shown don't help to make things any more believable.

Let's go over what the heck this presentation is really about and cut through all this BS.

What The Heck Is "5G Cash" Really?

In a nutshell, "5G Cash" is a term that was made-up for marketing purposes that refers to dividend checks that can be collected from investing in 5G cell tower REIT companies.

As mentioned in the presentation, this "5G  cash" is made possible by an old Eisenhower-era law, PL 86-779.

PL 86-779 was created by president Eisenhower to incentivize large companies to invest in infrastructure, and by doing so they would get big tax breaks. This started out as a way to help speed up the construction of highways and has expanded to other areas of infrastructure, such as pipelines and now 5G communications.

PL 86-779 requires that REITs, or Real Estate Investment Trusts, pay out 90% of their profits to "unitholders", which are people like you and I who invest in them. 5G cell towers are considered real property and anyone can invest in these REITs to collect regular checks based on their earnings.

Here's how it works:

Cell tower companies like American Tower Corp. (AMT), SBA Communications Corp. (SBA), Crown Castle International Corp. (CCI), etc. rent out their communication services to large companies like Verizon, AT&T, etc. and they pay out 90% of their earned rent to unitholders, which is basically the same thing as a shareholder... people who invest in them.

These dividends that the 5G cell tower REITs pay out are what is being called "5G Cash".

And yes, President Trump has been a big supporter of the development of 5G. In the promotions it is mentioned that he signed some document to push this technology forward. They ould be talking about the memorandum he signed to establish a "Spectrum Strategy Task Force" that's goal is basically to keep America first in the 5G revolution, among other things too.

No, income is NOT guaranteed!​

I know Zach Scheidt makes this sound almost like some guaranteed way to make substantial income, but this is misleading. This is investing folks! There are no guarantees here and your earnings will be directly proportional to those of the company as well as the amount you invest.

As always, never invest more than you can afford to lose.

It's All a Sales Pitch

If you were able to make it through the entire long-winded presentation then you should know that it all ended up being a sales pitch.

Zach Scheidt wants to help people invest in these cellular tower REITs by giving them access to what he calls the 5GCCC ("5G Cash" Command Center)... 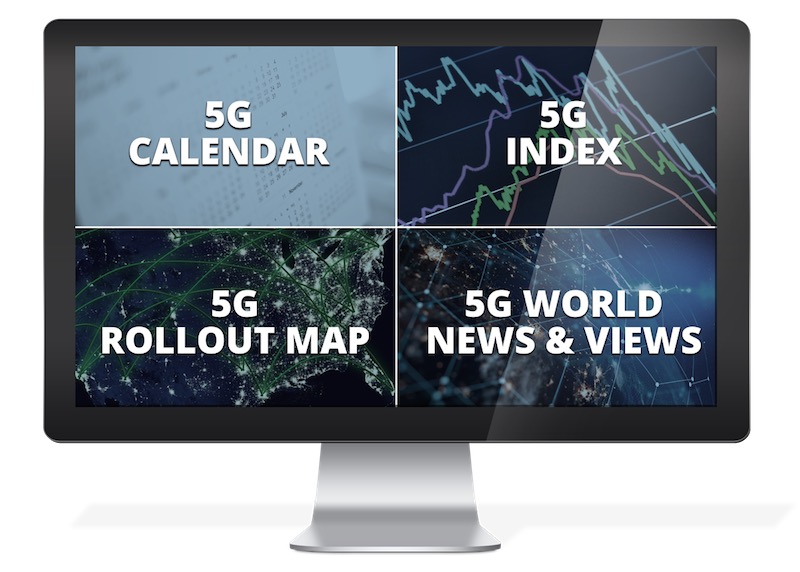 What this includes is:

However, in order to get access to all of this you first have to subscribe to his subscription advisory service called Lifetime Income Report. This is the same way most investment teasers work, such as the "Tesla Killer" and the "5G Master Key" teasers that we've exposed here at Green Bull Research.

This Lifetime Income Report service is a follow-along type of advisory service where Zach Scheidt and his team provide subscribers with investment recommendations and market analyses on a regular basis. The cheapest subscription option is $49 and there is a "6-month risk-free trial" where you can request your money back if you don't like what you get... so all-in-all it's not a bad deal. Or, better said, it's not a bad deal if the recommendations provided via the service actually perform well.

While you certainly shouldn't expect to be living a celebrity lifestyle and raking in the cash like Zach Scheidt leads everyone to believe, this opportunity can be a good one.

Historically, cell tower company REITs have done pretty well over the years. This opportunity first started becoming available after American Tower (AMT) converted in to a REIT in 2011, and others have followed suit. The reason they have done well for investors is because of the increasing demand for their services, and now there's 5G coming around.

One thing that makes cell tower REITs different from most other REITs is their rapid growth potential. This largely comes down to how many of these companies use their cash flow to buy new infrastructure rather than paying high yields. This allows them to grow faster, and with the 5G revolution this is expected to continue.

So yes, this is thought to be a good opportunity by many. And in the "5G Cash" Command Center members who join are provided with specific cell tower REIT companies that Zach Scheidt and his team think make for the best investments.

I hope this review has helped clear up what's really going on here. It is your own decision whether or not to buy into the service being pushed here and get access to the 5GCCC (5G Cash Command Center). I think it could definitely be helpful to be provided with all the information you get in this package, especially for beginners, but it isn't something you absolutely need.

Please leave comments/questions below. Let us know what you think about all of this. We like to hear our readers' opinions!