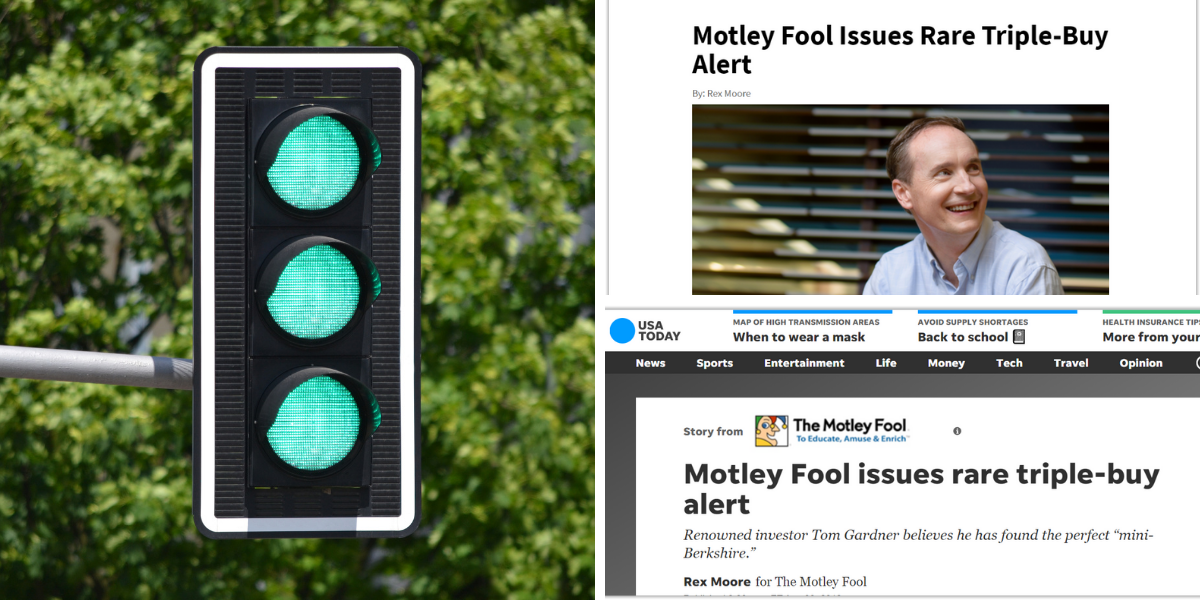 Wondering what the heck Motley Fool's "Triple-Buy Alert" stock is? Then you're in the right place.

A lot of people have been wondering and here at Green Bull Research exposing stock teasers is what we do.

Of course you'd normally have to buy into the Stock Advisor newsletter service to find out the name of the triple buy stocks being teased, but we'll just go ahead and tell you for free.

The Motley Fool has issued more than one triple-buy alerts over the years, but what I've come across most recently has been ads like this... 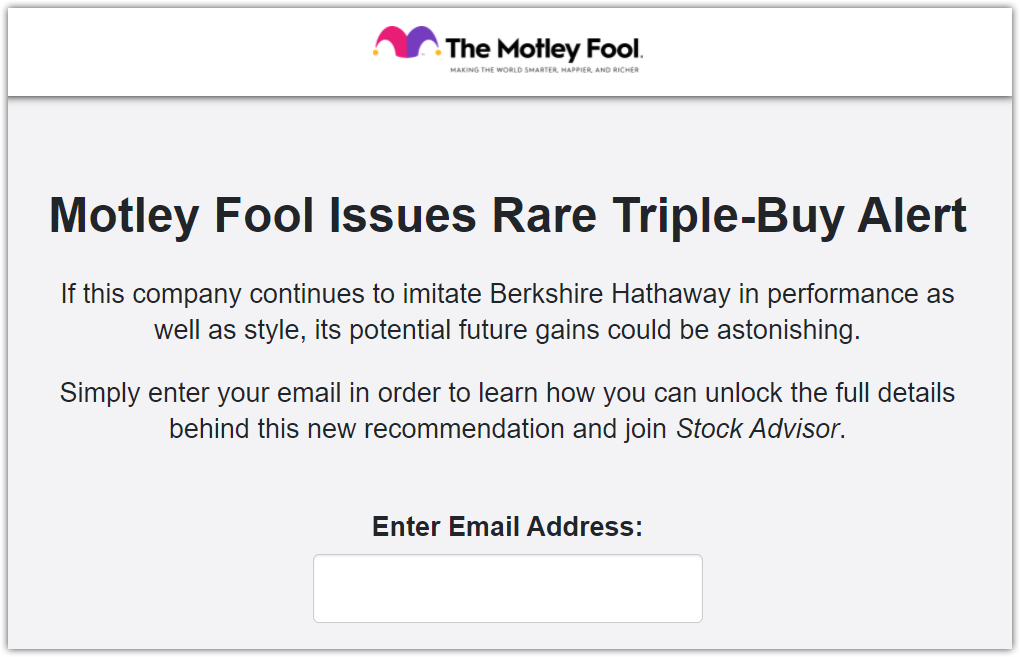 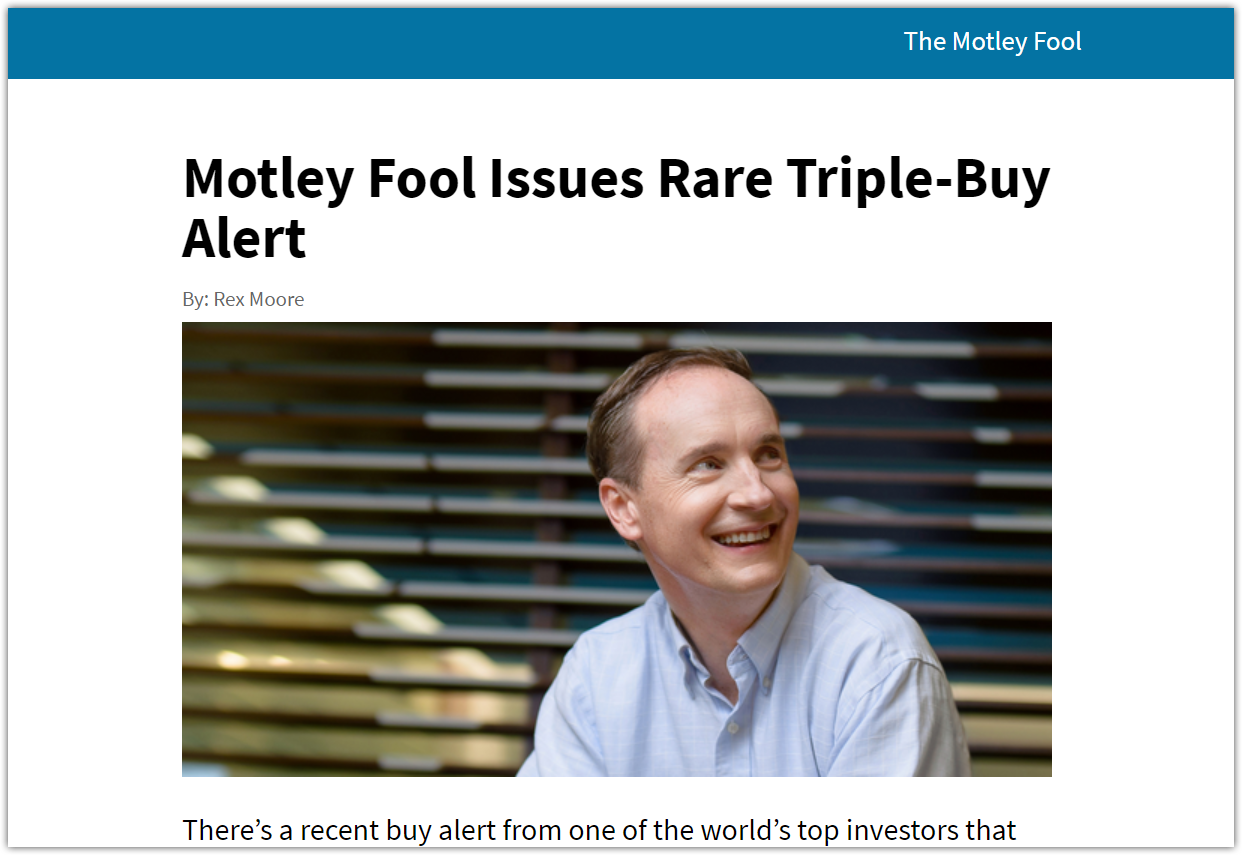 And here's another "Motley Fool issues rare triple-buy alert" ad that was posted on USA Today...

Tom and David Gardner, two brothers, founded The Motley Fool in 1993. It started off on a small-scale, but has since become one of the largest investment newsletter services out there, with their flagship Stock Advisor newsletter service having 700,000+ subscribers.

The company has become pretty massive, and this is why they're able to get media outlets like USA Today to help promote their services. You won't see this from the little advisory service out there, that's for sure.

And let's not forget, one of the reasons they've been able to grow their subscriber base to such large sums is because of their enticing and often somewhat sneaky marketing tactics.

It's the typical invesment newsletter marketing blueprint. First, The Motley Fool teases the opportunity to invest in some company that is undervalued and often a leader in its respective market niche. The opportunity is usually hyped up to get people excited enough to dream of buying a vacation house in the Maldives with a private yacht docked out front. Then, right when you think you're going to get the name and ticker symbol for the stock being teased, you find out you have to take out that credit card of yours and pay to subscribe to their newsletter service... usually Stock Advisor. 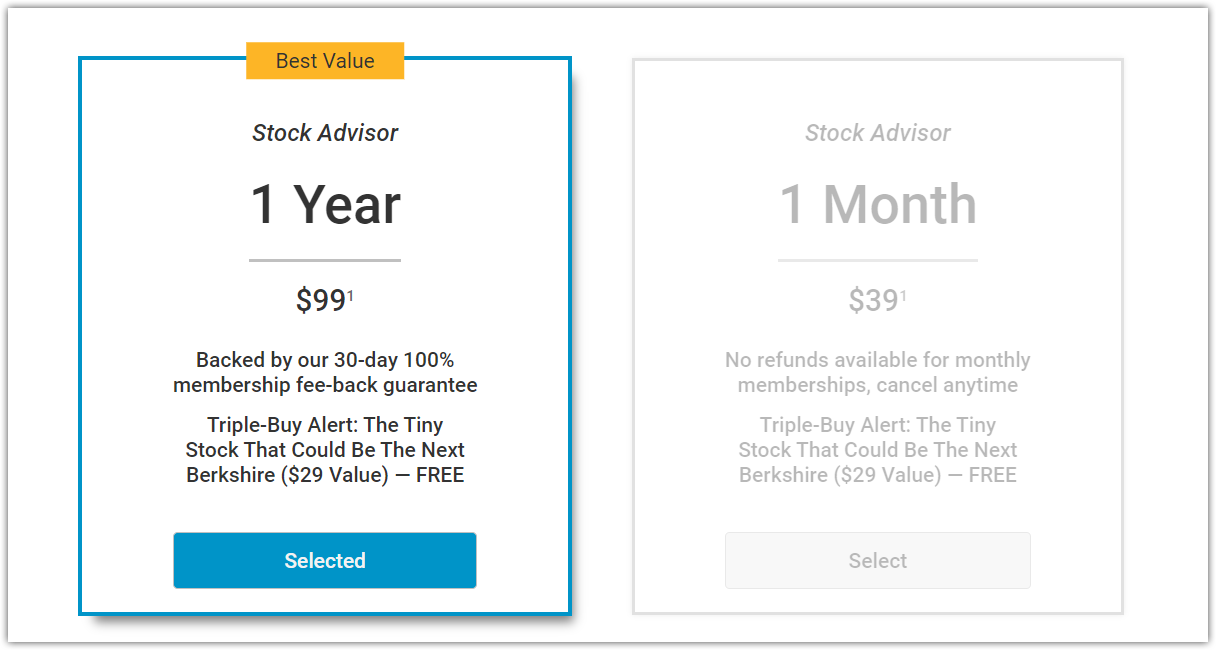 But I'm guessing you'd rather not pay $99 for a subscription... and the good news is I'll just be telling you the triple-buy stock being teased most recently for free. But first, let's discuss what the heck one of these alerts is in the first place.

What Is a "Triple-Buy Alert"?

If you're already familiar with The Motley Fool then you're probably well aware that they often make up their own terminology and slang for promotional purposes.

A triple-buy alert, triple-buy recommendation, or even a "triple-down stock" all mean the same thing.

And then there is other lingo they use, such as their "All-In" and "Ultimate Buy" alerts, which I covered in a previous article.

These are nothing more than recommendations that have been made for a specific stock three times (by Tom and/or David Gardner - founders of TMF)... or at least that is how I understand them to be.

When TMF recommends a stock just once, that's not called anything special. When they recommend a stock twice, this is sometimes called a "double down" stock or something similar. And then on the third time, this is when they start calling it a "triple buy alert", "triple down stock", etc.

I don't know exactly how many times they have recommended a stock for the third time, but I do know that it is rare. And the fact that they are re-recommending one so much shows how confident they are in the pick.

Often times these stocks are at least worth a minute of your time to take a look at.

According to a promotion I came across for a triple buy alert, these "'triple recommendations' are averaging an astounding 922% gain each".

Some past triple-recommended stocks include:

*Note: Netflix was also what they call an "All-In" stock, which are stocks that are recommended independently by both Gardner brothers (David and Tom) of The Motley Fool... 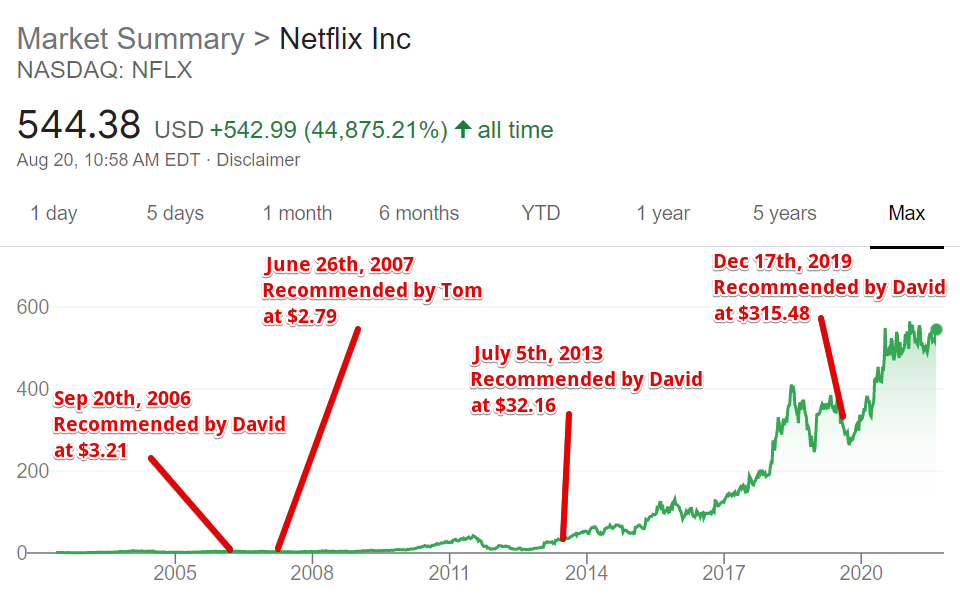 Sure, we know that in order to be called such, a stock must be recommended for a third time. However, do all of these recommendations have to come from a certain newsletter advisory service of theirs?

The flagship investment newsletter at The Motley Fool is Stock Advisor, but there are others as well, Rule Breakers being their second biggest. 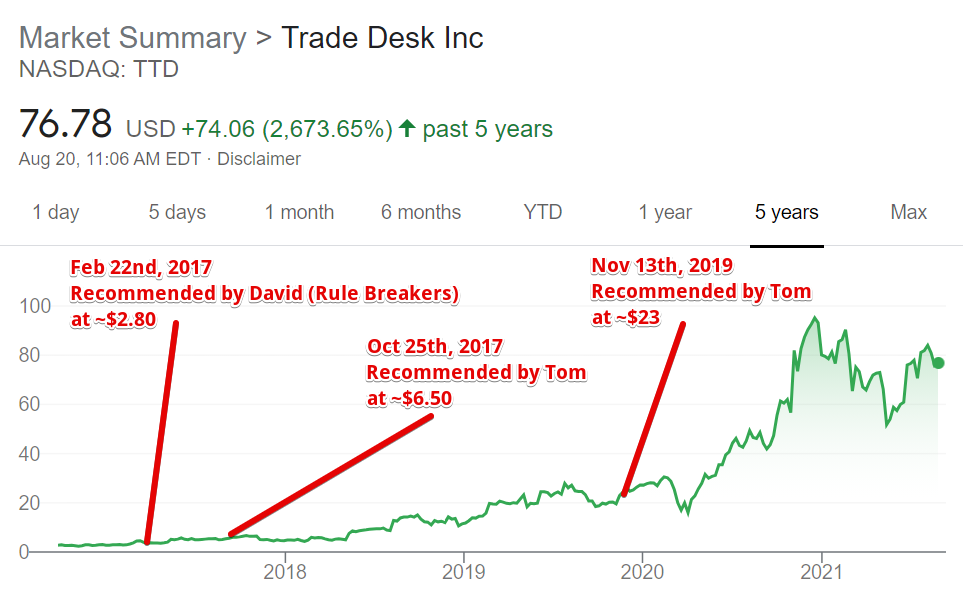 Tesla (TSLA) was another recommendation that occurred three times in total, but the first time it was a Rule Breakers recommendation (nonetheless a great pick)...

So, were these considered "triple-down" stocks and were there "triple buy" alerts sent out for those third recommendations?

This I don't know exactly. There isn't any clarification on it from TMF themselves.

So we know there have been a handful (not many though) of triple buy alerts sent out by TMF over the years. But of course I'm guessing you probably want to know the most recent alert of this kind.

Well, luckily for you, here at Green Bull Research we've already exposed this stock, which has been promoted as late as 2021 (that I know of for certain).

They most recent triple-down stock  is an "under the radar" stock (not really) that they are calling a "Mini Berkshire".

They also are teasing this company as being like investing in Berkshire Hathaway back in 1992... and the company's stock price has went up about 50x since then.

So what is this company being teased as a potential 50x'er?

It's none other than Markel (MKL), which does take a somewhat Berkshire-approach to investing and has great financials.

You can read the full report of this exposed teaser here if you'd like.

Are They Worth Investing In?

Tesla (TSLA) is a good example of this. 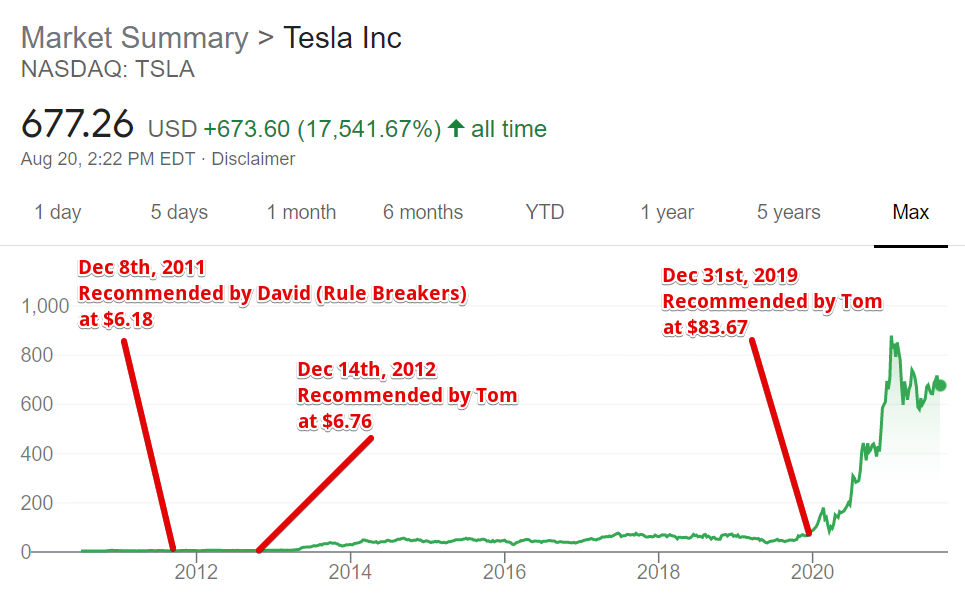 So if you had invested after their triple-buy alert, you wouldn't have made near the profit versus investing when their first two recommendations came out... but nonetheless it was a great investment no matter how you look at it.

As I mentioned earlier, TMF claims that "'triple recommendations' are averaging an astounding 922% gain each". But is this 922% after their third recommendation?

I want to believe so because they were honest with the average gains for their "All-In" stock buy alerts that I reviewed previously, but there just really isn't enough information provided on these triple picks for me to verify this claim.

The Motley Fool sends out "Triple-buy alerts" for what they call "triple down stocks". And these are nothing more than stocks that are being recommended for the third time, which shows a high conviction.

Whether you invest in these stocks is certainly up to you and here at Green Bull Research we always encourage investors to do their own due-diligence before throwing their money around, but with a reported average gain of 922% coming from these stock picks, they are usually worth a look.

I hope this review has provided value to you. As always, let us know what you think of the latest triple-down stock in the comment section below...