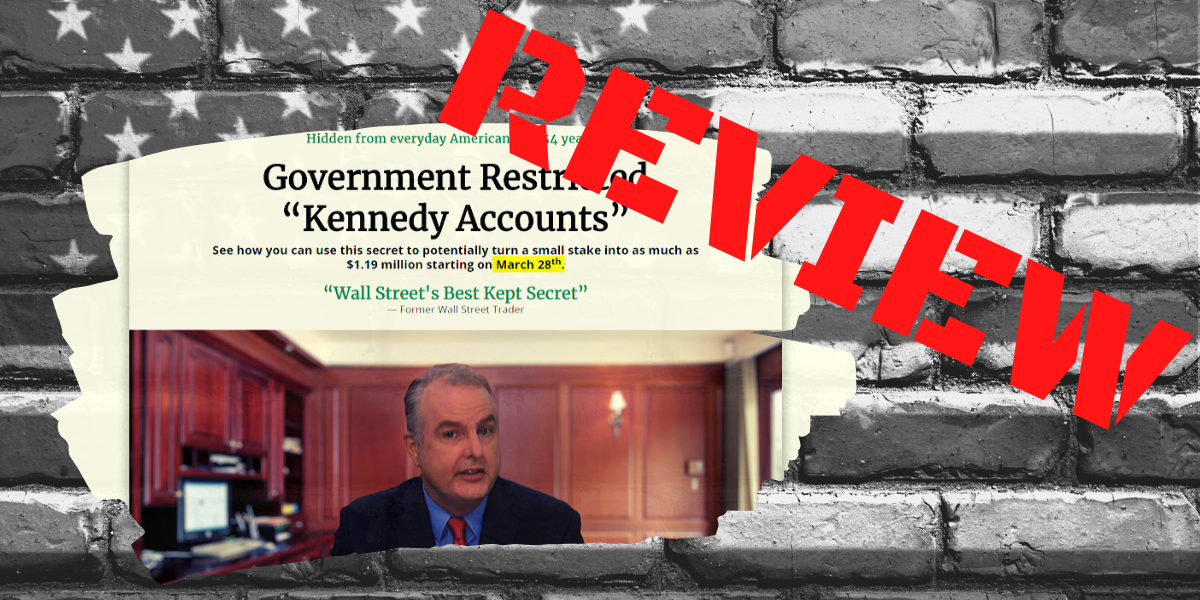 It's promoted as being "Wall Street's Best Kept Secret" and we are told that we can collect up to $1.19 million, but what are "Kennedy Accounts" really?

Jeff Yastine touts them as being some incredible money-making opportunity, but in the promotions it seems more like a scam than anything.

We've cut through all the BS for you, and in this short review we'll be going over what "Kennedy Accounts" really are (which is not what they seem to be) and how you can sign up to get one of these "accounts"... not really accounts though.

You may have seen the video presentation that has surfaced online... 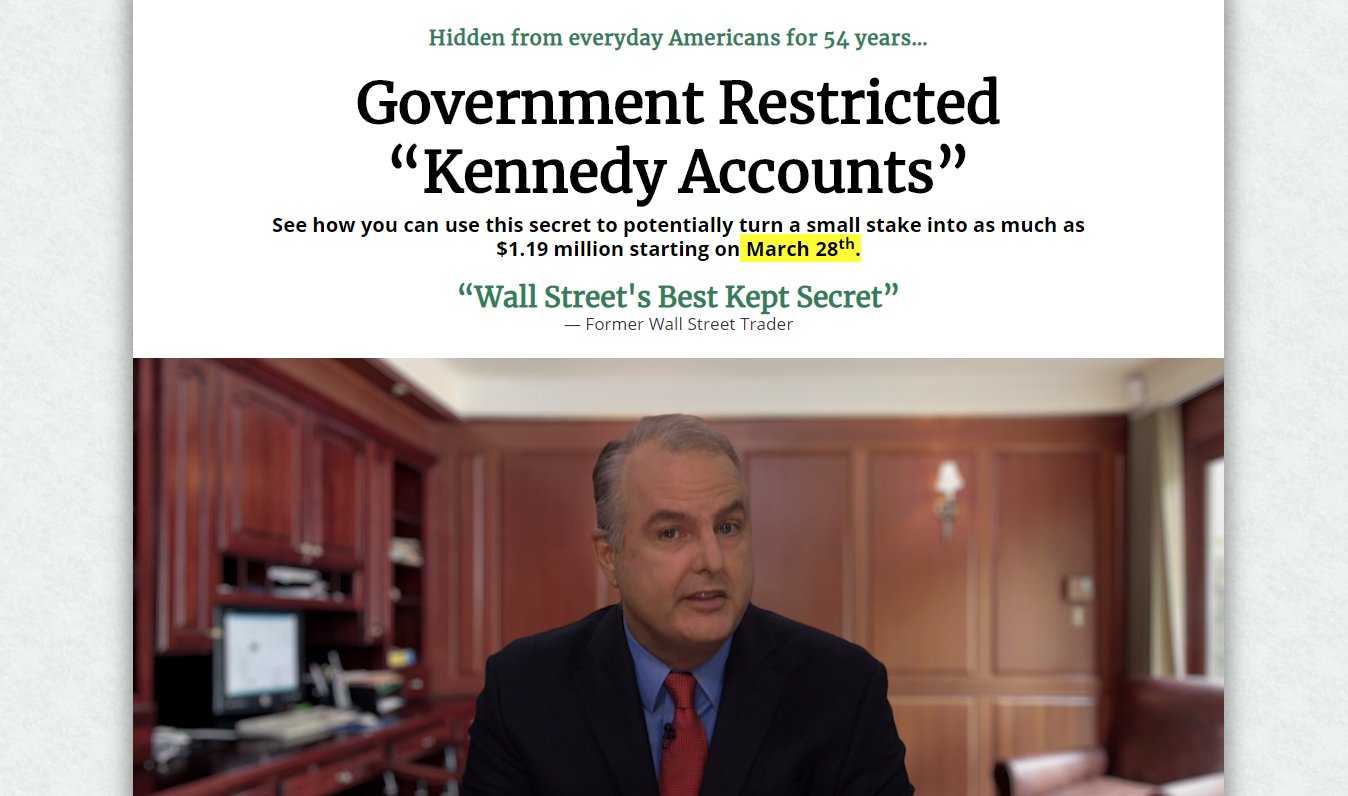 In the presentation Jeff Yastine claims that these "Kennedy Accounts" have fueled the Kennedy fortune... and even the Clintons' as well as Bill Gates' and Warren Buffet's fortunes.

He goes on to say that the government has been keeping these accounts a secret from the public because of how profitable they are.

Supposedly they are better than IRA's and 401k's for retirement.

But one of the catches is, so we are told, that you have to get in before the 1st of next month... and if you... "you're looking at the same potential that folks had getting in the $1.19 million retirement miracle".

Throughout the presentation we are shown various people who have supposedly been investing in these Kennedy Accounts and have made lots of money. In fact, a good portion of the video is with Jeff Yastine just hyping up this opportunity more and more, which only made us more and more suspicious.

What made us even more suspicious was the fact that some of the photos he showed of people were not real... such as "Maurice & Theresa Brooks" who supposedly turned a $122 investment into $100k... 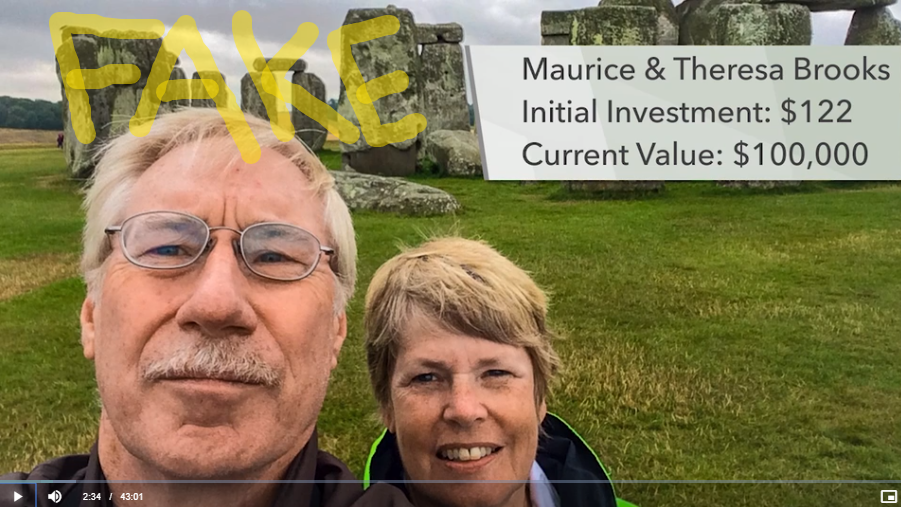 Why are we calling this image a fake?

Well, because after searching for it online we were able to find that it is actually just a stock photo available for anyone to purchase... 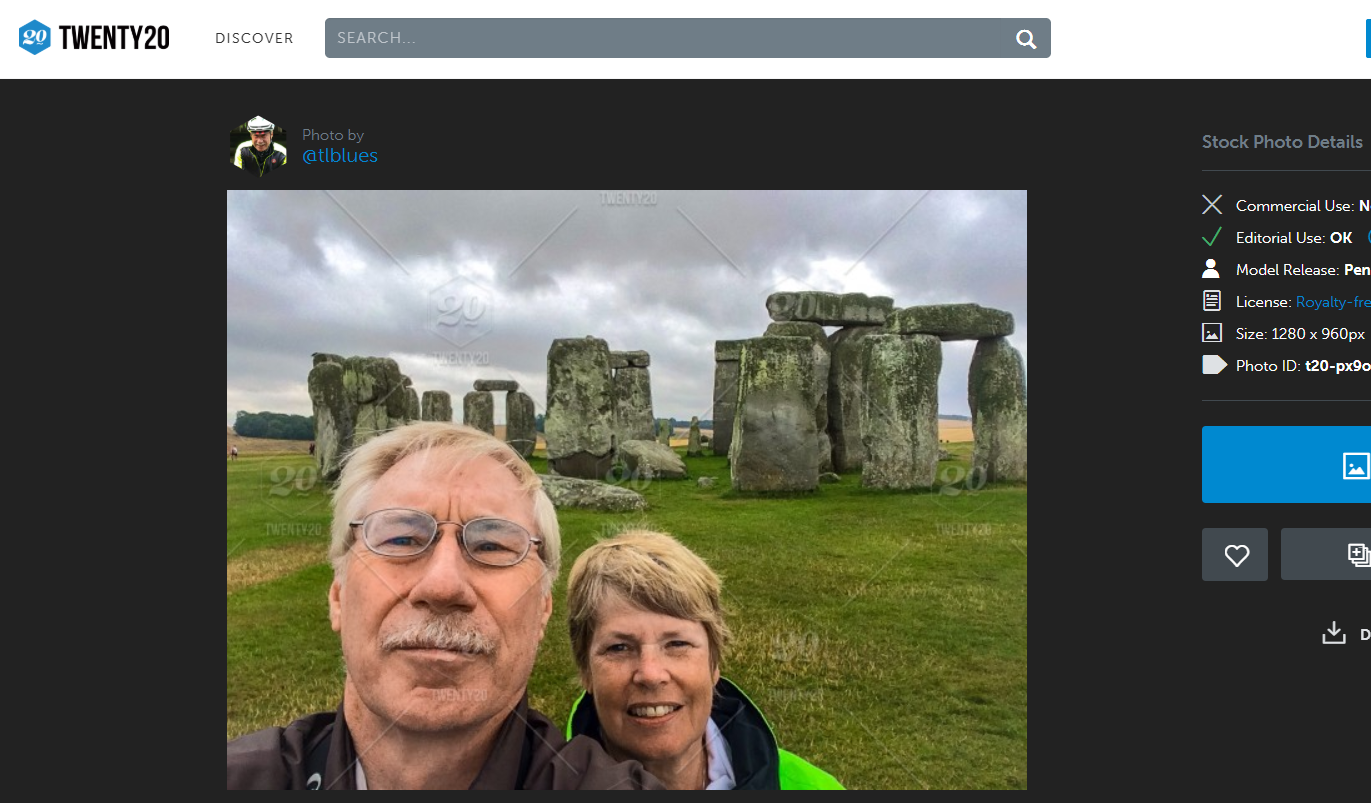 Fake photos, incredibly vague information given, an opportunity that sounds way too good to be true... is this a scam?

The answer is No, but it is quite a misleading opportunity, and now we'll be discussing what's really going on here...

What Are "Kennedy Accounts" Really?

"Kennedy Accounts" is actually a made-up term by Jeff Yastine that was created for marketing purposes. BUT, there is a real opportunity here that he is referring to, and the reason for the name is because this opportunity comes from a law by John F. Kennedy in an attempt to stimulate the economy.

Kennedy Accounts are really what are a form of Direct Stock Purchase Plans (DSPPs) called Dividend Reinvestment Plans (DRiPs). And some of the information given in the presentation is true.... DRiPs unknown to much of the public because the SEC rules do not let companies advertise them to non-shareholders. Furthermore, brokers don't tell people about them much because they don't earn any commissions from them, and you'll see why.

DRiPs are opportunities to purchase shares of stocks without using brokers, but rather buying them directly from the company. Limited opportunities like this exist, but have some obvious benefits... 2 of them being that...

It turns out that Jeff Yastine actually released an additional video providing more details on this opportunity, which goes over what we just mentioned.

You probably already know how this all works if you were able to sit through the entire video presentation, which was fairly lengthy.

Yastine has an ebook that he is giving away that provides details on his 5 favorite "Kennedy Account" opportunities... 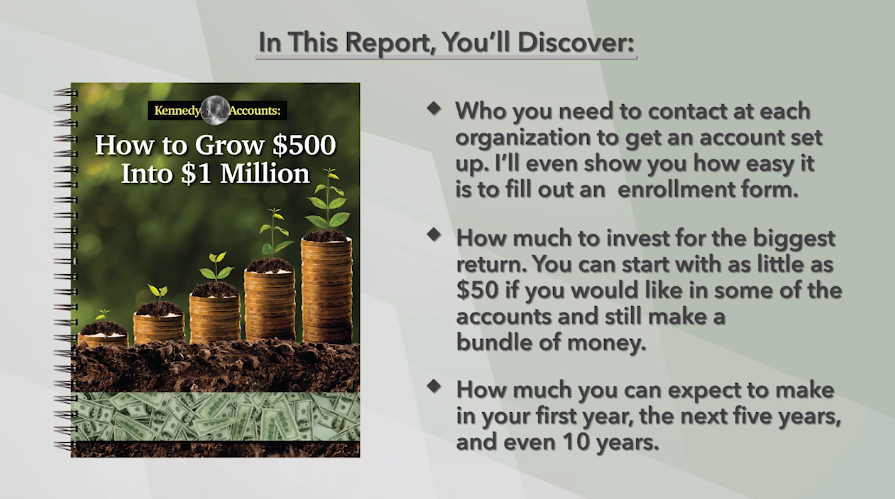 HOWEVER, in order to actually get this ebook and the information, you first have to subscribe to his Total Wealth Insider newsletter advisory service, which does cost money. 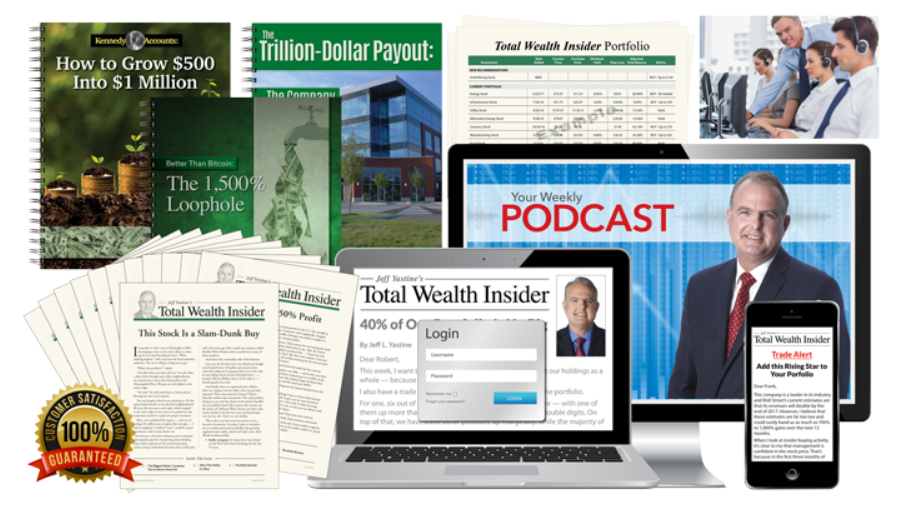 This is a follow-along type advisory service where subscribers are provided with monthly investment recommendations, updates and trade alerts, etc.

The price for the Standard Subscription, which is the lowest cost, is $47 a year.

So in short, this is all a marketing pitch, similar to the "Congressional Checks" teaser that was used to lure in subscribers to a different investment advisory service.

In short... the opportunity being teases is nothing like it seems to be and it's all marketing stunt to draw in new subscribers.