The “Robot Royalites” Jason Williams Is Teasing – Automating Your Income 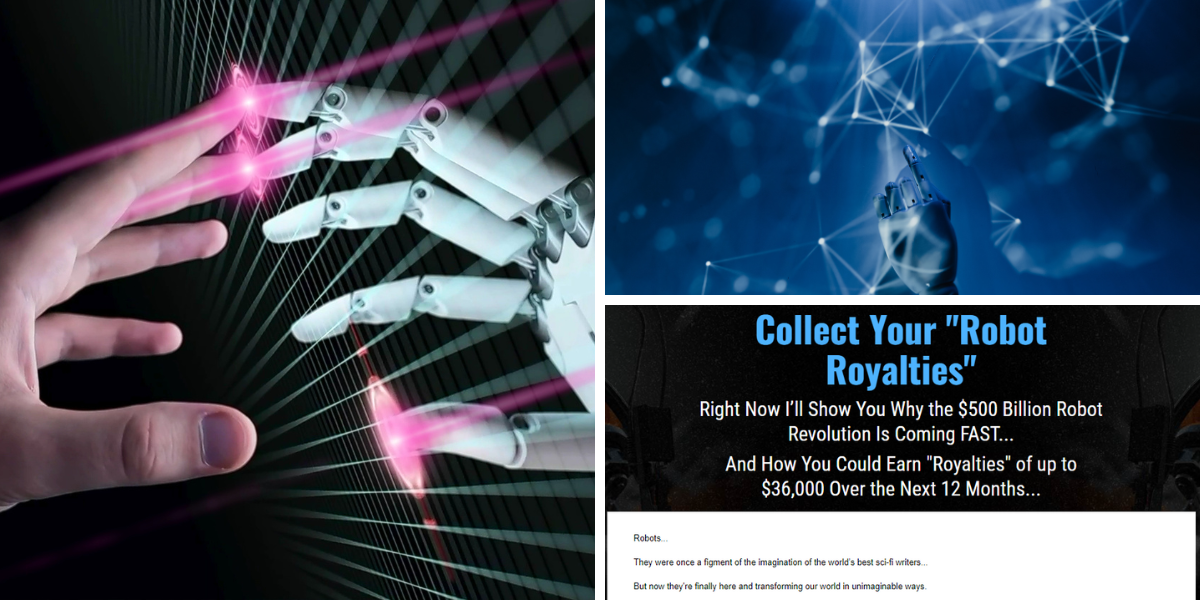 Angel Publishing’s Jason Williams says the $500 billion robot revolution is fast approaching, which sounds like the beginning of a sci-fi movie script.

He assures that this is not a mere figment of someone’s imagination, but a coming reality with massive societal upheaval. For some fortunate few that are in the know, there will be a way to collect “Robot Royalties” to help ease this pain.

Robots have already become integral to many industries, including restaurants, hotels, casinos, and retirement homes throughout the U.S. They’re lightening our workload and speeding up business processes everywhere.

The world’s leading companies are pouring billions of dollars into robotics as we speak:

Right now robots are “just” a $38 billion industry. But this is about to drastically change, as by 2030 it’s estimated that the robotics industry will be worth some $500 billion!

A 1,215% increase in less than a decade means a lot of new wealth will be created by robots. Of course, this “new reality” will also see many fall through the cracks, as robots take over an ever-increasing share of tasks formerly performed by human labor. However, thanks to a recently uncovered loophole that Jason calls “Robot Royalties” there’s a growing pool of income being made available to regular investors like you and me.

One that’s paid out in regular increments by robotics companies around the world. So, how exactly does this work?

Before spilling the proverbial tea, Jason reassures us that we don’t have to own a single share of Amazon, Google, or Microsoft stock to do this. Nor do we need to sign up for any government program or fill out any lengthy forms. All we have to do is…

Read Jason’s full report on this new loophole called “Robot Royalties: The Secret That Pays Every Time a Robot Leaves the Assembly Line.”

This promises to explain every last detail on “Robot Royalties” and best of all its absolutely free…if you agree to a trial run of Angel Publishing’s income generation service, The Wealth Advisory. This is not free, it will cost you $99 for a full year’s membership, which is a 60% discount from the regular price of $249. But it does include two special reports, including the one mentioned above, confidential buy and sell alerts, and a dedicated members-only website.

What in the World Are “Robot Royalties?”

Jason intimates that daily “robot royalty” payouts have ranged anywhere from a mere $560 all the way up to $65,775.

As we’ve already shown big tech companies are pouring billions into robotics as we speak since they are speeding up manufacturing processes everywhere and literally saving these same companies millions of dollars per day. Well for starters, since robots never get sick, they never get tired, and they don’t need health insurance or expensive benefits. Companies are passing the majority of the cost savings onto their remaining employees in the form of bonuses and raises.

As for the remaining amount, a good chunk of it is going into the pockets of investors who are taking advantage of the “Robot Royalties” we have heard so much (or little) about. This remark by Jason leads me to believe that the so-called “Robot Royalties” are nothing more than plain old dividends.

Since Jason admits we wouldn’t be buying into any crazy-expensive technology stocks, holding any bonds or options. By simple process of elimination this only leaves ETFs or Exchange Traded Funds. Especially since it purportedly only costs $100 or less to get started.

This begs the question, what ETF(s) is Jason teasing here?

Jason keeps it consistent, insofar as he doesn’t reveal a single thing about any potential “Robot Royalty” picks.

But since robotics is one of the fastest growing tech segments today, a quick Google search reveals that there is no shortage of robotics and artificial intelligence (AI) ETFs already trading on U.S. exchanges. Here are just a few we were able to dig up:

I’m not saying these are Jason’s picks, since there is no way to know with absolutely no clues. But these are just some of the most prominent funds investing at least 80% of their assets into AI and robotics companies and reaping regular income therefrom.

To be fair, the commercialization of robotics on a global scale is still in its infancy and a good argument can be made that as this changes, so too will the assets held by these ETFs explode, sending their yields soaring as well. But make no mistake, this is a multi-decade investment and not something that will materialize over the short to mid-term.

That being said, we are on the right track here as anyone hoping to earn superior risk-adjusted returns from the automation of industry can do so most easily by building a diversified portfolio of industry leaders across geographies, small and large companies, and technologies and applications.

The simple way to do this is by owning an ETF or several, which in turn offer exposure to all of the above. This may not earn you $60,000 in a single day at current yields, but it does offer a legit chance for capital appreciation and a growing stream of income over the long-term.

Are you already invested in robotics and automation? Let us know your experience in the comment section down below.