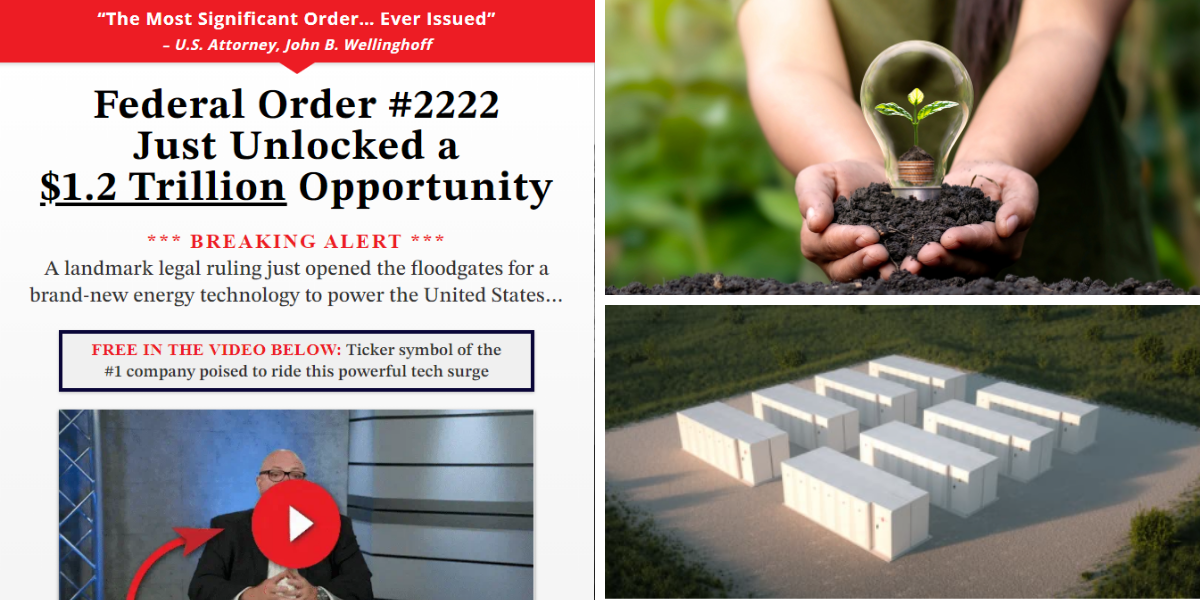 The term stands for “Battery Energy Storage Systems”, which have been described as a computerized network of smart batteries that can “think” for themselves and Ray says that he has “The Perfect BESS Investment” for us. Let’s find out more.

The “landmark federal ruling” Ray refers to is Federal Order #2222, which he thinks “could be the most important piece of legislation for investors this century”.  This is because the legislation legally forces American power companies to make way for brand-new energy technologies that can help light up the country. 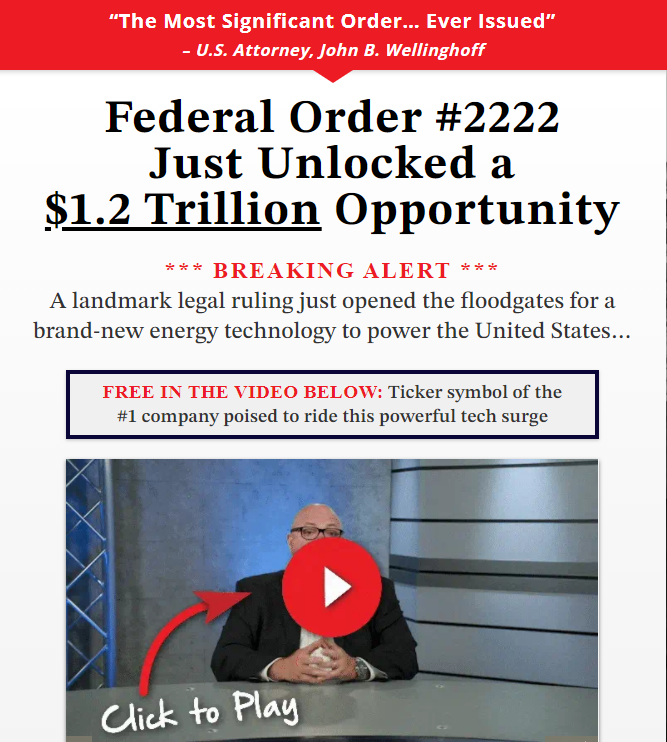 Ray Blanco is the Chief Technology Editor at St. Paul Research, a financial publishing firm located just outside Washington, D.C. His work has previously appeared in The Wall Street Journal, Forbes, USA Today and more than 80,000 people all around the world follow his research on technology investments. We have covered clean energy opportunities here in the past, including Nick Hodge’s “Amazon of Energy” stock and Dave Fessler’s “Liquid Electricity” stock.

The order could end up “unlocking $1.2 trillion in new wealth” and kicking off what Bloomberg calls a 12,100% tech surge over the next couple of decades. These are some mighty big claims, but if this government-assisted boom were to somehow enable cheaper energy (this is a BIG but), then it could disrupt the current energy market, especially at a time when consumer energy prices are hitting record highs in some areas.

Nevertheless, Ray feels confident that “BESS will fundamentally change the course of human civilization” and his free presentation is the first to really reveal details about it, including:

What is really interesting is that some of the biggest energy companies on the planet are following the electric vehicle behemoth’s lead and scrambling to harness the power of BESS as we speak, including the third largest oil and gas firm in the world – Shell, which is spending $2 billion a year on research and development for BESS and PG&E (the biggest utility company in the United States) who has even partnered up with Tesla to launch projects dedicated to BESS technology.

These massive investments coupled with Federal Order #2222 will pave the way for BESS to produce over 380 gigawatts of power over the next four years, which to put it into perspective is enough power to electrify every single American home and virtually assures mass adoption of the technology, should it come to pass.

In addition to the #1 BESS company, which will be revealed to us in a moment, Ray is also touting “The Perfect BESS Investment”, which is separate and distinct from the former.

Before going into any more details about his “perfect BESS investment” Ray reveals that only subscribers of his Technology Profits Confidential investment newsletter who fork over $49 for an annual membership will be privy to the details of this company via a special report entitled: The Perfect BESS Investment: 10X Your Cash On Tesla’s Biggest BESS Competitor. 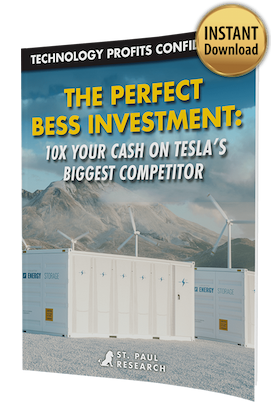 Besides 12 regular monthly issues and the aforementioned special report, two additional special reports will also be included as well as urgent market alerts, access to a 24/7 members-only website, and more.

What in the World is BESS?

Battery Energy Storage Systems are a combination of two game-changing innovations, merged together, to create one new disruptive technology according to Blanco. The first of these is the energy storage battery, more specifically the lithium-ion battery.

Not many appreciate that this is the breakthrough technology that single-handedly unleashed the world of modern-day consumer electronics as we know it, making possible everything from the wrist watch, to the laptop, and smartphone as all are powered by the lithium-ion battery.

Today lithium-ion batteries are becoming more advanced and powerful than ever and a secret battery project of Tesla’s named Gambit Energy Storage LLC is “quietly assembling a battery to power the world” with it’s Autobidder software that optimizes energy for batteries. While this may be the first time we are hearing about this, it is nothing new according to Ray, who says that “Tesla has already installed it’s BESS battery software in energy projects in some 40-plus countries around the world”.

These have apparently already delivered some impressive early results, with Forbes saying that “the solar-plus-battery storage project generates power at HALF the cost of natural gas”. This is where our chance to make 122x on our hard-earned money comes in, as these recent technological improvements made to the lithium-ion battery have caused its price to drop like a rock. Of course, falling prices inevitably create surging demand and that’s exactly what’s happening right now. 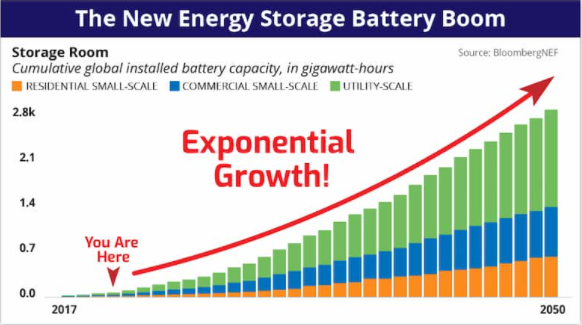 Bottom line, our timing could actually be perfect…for once. As advanced battery technologies are poised to dramatically change our lives, sooner than many in the market realize and there’s one “perfect BESS investment” that Ray is confident trumps even Tesla’s Gambit Energy and will “attract the lion’s share of attention from Wall Street and the general investing public”. Let’s find how this investment stacks up.

This is not to be confused with The #1 BESS company in the world mentioned earlier, which it turns out is Fluence Energy LLC. Fluence is expected to go public through an IPO sometime in 2022, but until then you can get exposure to the company by buying AES Corp. (NYSE: AES), which owns a major stake in Fluence and is a good way to dip the toe in the BESS battery boom.

Now for our main event, here are some clues about what the ‘perfect BESS investment’ may be that is crushing even Tesla in the BESS battery boom:

Based on these clues, the company Ray is hinting at is Stem Inc. (NYSE: STEM). Here is what gave it away:

Is this the battery storage disruptor that will make us 122x on our money?

As the first public pure play smart energy storage company, Stem definitely provides modern solutions to today’s energy problems. Its Athena software is protected by 24 patents and it already operates the energy supply for over 850 BESS batteries around the world.

These are significant milestones for a business that is still in the very early stages of its growth curve. If its widely deployed AI platform truly can optimize the value of its customers’ energy assets and help lower energy costs, as it claims. Then this would be a landmark and something which could make it an energy giant over the long term.

That said, one would have to strap themselves in for the long haul, as it’s present-day economics – negative earnings, plenty of capital expenditures on research & development, and an already generous valuation do not make good fodder for another short-term run up in price.

Are you already on board the clean energy bandwagon? Is Stem going to be the leader in the energy storage supply space or are there others out there? Let us know in the comment section below.