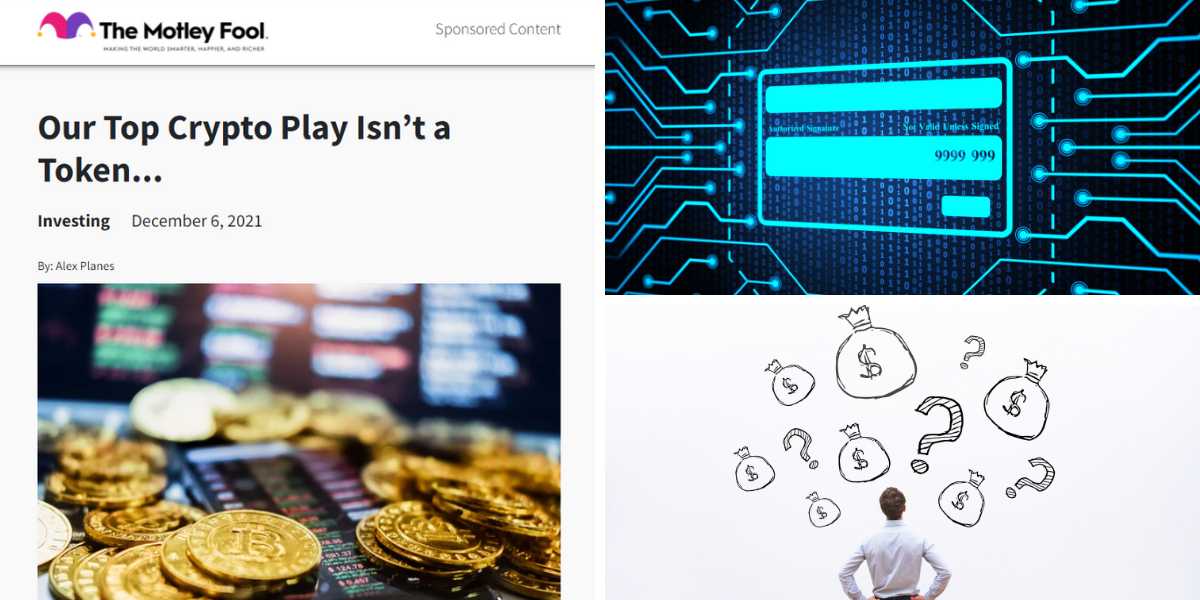 The Motley Fool has recently started teasing their "top crypto play", which they tell us is not a token.

If you're wondering what they're pick is, then you're in the right place.

A lot of people have been asking about this one and so I decided to do a little digging around to figure it out.

In this post we'll go over the teaser information with the clues given along with what the stock is they're teasing. Yep... it's a stock. 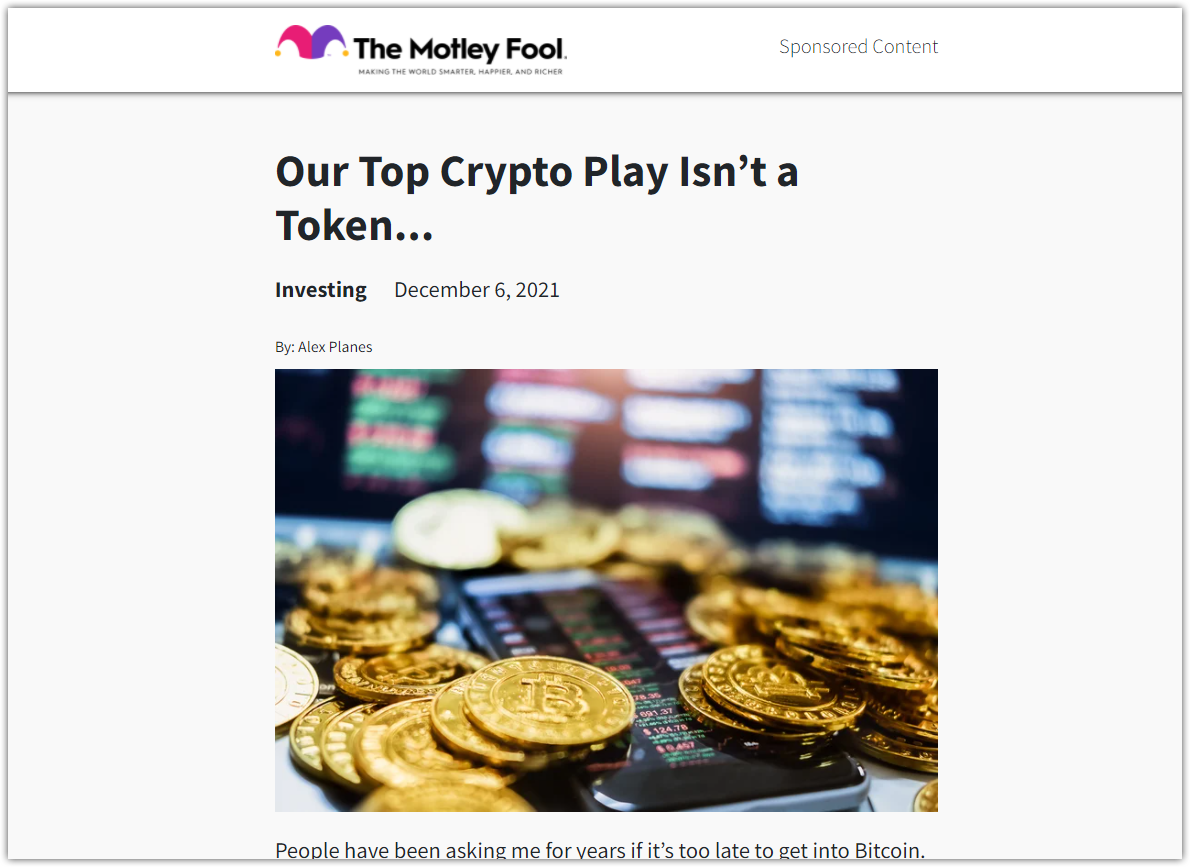 We already know it isn't a token, and it isn't that hard to find out that they're teasing a good ol' fashion stock investment here as their crypto play.

While they didn't actually mention the word "stock" in the presentation, all I had to do was look at the URL of the page to find this out.

As you can see, the URL slug is "why-this-one-stock-set-to-make-money-on-bitcoin-at"... 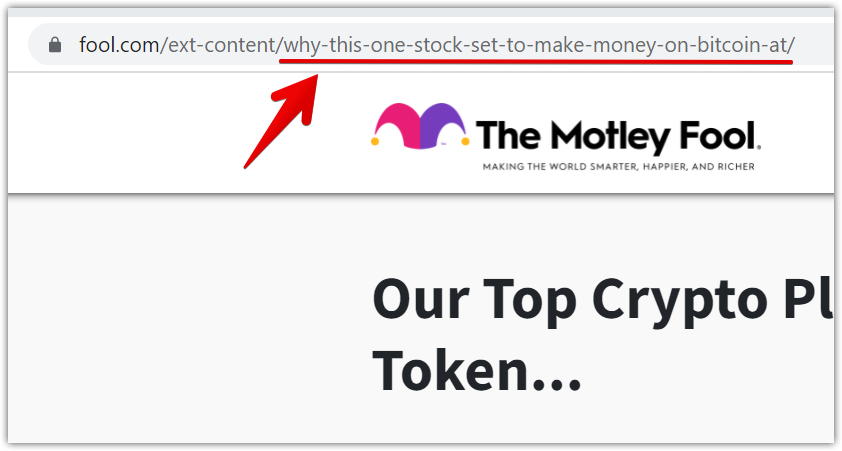 The teaser presentation seems to be put together by Alex Planes, or at least that's the author listed.

*I'd also like to point out that the publish date that you'll see on this presentation is not true. It will state whatever the date is when you visit the page. Above it shows December 7th... but this just happens to be when I was doing research.

Planes is a "conversion copywriter" and I've also seen him listed as a Nasdaq Journalist.

Although I haven't heard of him that much within The Motely Fool, his background makes sense for a presentation like this. Of course, with a teaser presentation like this TMF wants to lure in as many subscribers as possible. They want a good copywriter who has in-depth knowledge of the investment world.

This is what Planes brings to the table.

And, according to his LinkedIn profile:

"I write words to help you sell more stuff."

I also found that he has written a number of regular market news-type articles on fool.com.

But anyways, it doesn't matter that much.

The people behind this stock pick are Tom and David Gardner, the brothers that run The Motley Fool's Stock Advisor newsletter service... something that we've come across from other teasers in the past, such as their "Mini-Berkshire" and "All-In" stock recommendations.

Back to the teaser...

According to him, one of the problems the crypto market still has is that the barrier to entry is still too great for mass adoption.

"Someone has to help facilitate crypto moves for newer buyers, just as someone’s had to make it easier to get all sorts of other things done online."

It's a picks-and-shovels play that they are recommending here.

Right from the start it sounds like they are looking at a company that makes it easier for people to get involved in the crypto space.

From what we're told... they think the best line of action to get involved in the crypto space is to position oneself to "make money regardless of which direction any particular token is moving".

According to the team at The Motley Fool...

"We’ve found one company that’s positioned itself perfectly as a long-term picks-and-shovels solution for the broader crypto market — Bitcoin, Dogecoin, and all the others."

But, as always, in order to get the juicy details on this pick you'll first have to pay to join their Stock Advisor service.

Through the sales funnel I went through this costed $99 for a year.

I think this is usually the price shown... whether or not they decide to say that the original price is $199 and it's been discounted or not.

Basically, what TMF is saying in this teaser is the the barrier to entry, or the factors that stop newcomers from coming into the crypto space, is still just too great.

There is too much impediment, and supposedly their picks-and-shovels play makes it easier for everyday folk to get involved.

Some estimates state that there are over 300 million crypto users worldwide.

Compare this to the 3.8 billion people around the world that have bank accounts (a stat from 2018), and well... there's still a lot of room for growth.

So, a company that makes the process of getting involved easier could benefit greatly in the coming future... whether Bitcoin goes up or down.

Let's just expose this pick and get it over with.

We already know that this isn't a cryptocurrency pick, but rather it's a normal stock investment opportunity.

We also know that it's a "picks-and-shovels" play, meaning that it likely provides tools and/or services of some kind in the cryptocurrency industry.

There really weren't many clues to go off of here at all, but some more things we were told include:

Not a lot to look at here.

But, one huge clue we were given is that last one... that "you've probably used this company's technology in the past few days".

If this is true, and I have no reason to believe otherwise, then the company being teased here must already be a mammoth.

*Square recently announced changing it's name to Block - Square will still be the brand name for the seller business whereas Block will be the name for the entire corporate entity. This name change is expected to be complete by Dec. 10th, 2021. So, depending on when you're reading this... it may already have happened.

Square is an American financial services company that has a diversified fintech ecosystem and is probably best known for those small plastic "dongles" that can be inserted into the port of a smartphone in order to accept credit card payments.

The company has been involved in crypto for quite some time now.

And more recently, the company has been getting even more involved in the crypto space.

Jack Dorsey, the founder and CEO, is focused on "making bitcoin the planet's preferred currency."

With the new name change to "Block", Square's bitcoin funding initiative called Square Crypto is also being rebranded to "Spiral".

Am I sure Square (SQ) is the pick here?

Besides this pick matching up nicely with the limited clues given, we also know that TMF has recommended the company in the past, and recommending a company more than once is something they often do.

Proof of this can be found in disclosures at the bottoms of some of their articles like this one...

Not only that, but I also found a comment on StockGumshoe from someone in agreement with this pick.

Not much, but it makes sense.

The Only Way to Know for Sure

As you may already know, here at Green Bull Research we dig through clues left in teaser presentations to help expose stocks for free.

Depending on the amount of clues given, this can be easy or hard. We sometimes can match things up quite nicely, to expose picks with, say... 99% accuracy.

Other times, like right now, we don't have much to go off of.

Square (SQ), as mentioned, is my best guess. But the only way to really find out would be to subscribe to TMF's Stock Advisor newsletter service... not that I'm suggesting you do this.

If this pick is correct, don't get too excited.

This isn't a play for exponential returns. You certainly shouldn't count on 10xing your money.

Square's stock is trading at just under $200 at the moment and has reached nearly $300/share in the past.

With a stock price like this and a market cap of nearly $90 billion, it will take a heck of a lot to see big profit percentages.

I hope this provides some value to you.

As always, let us know what you think of this pick in the comment section below. We like to hear from our readers!