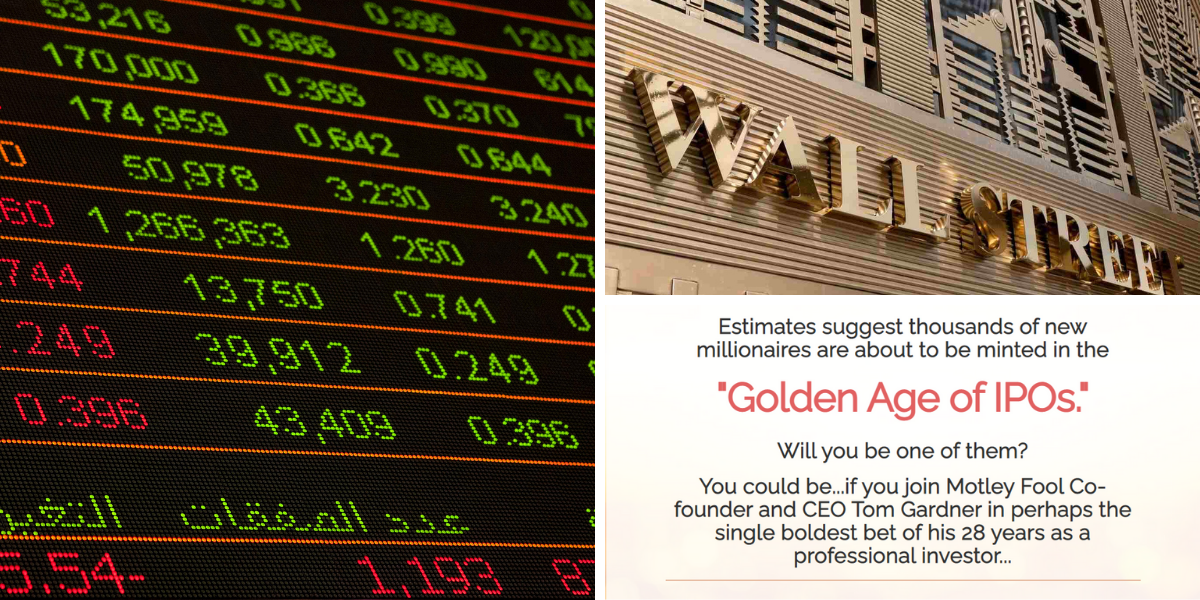 I’m going to be blunt…this is how our presentation starts, before stating that “If you want real, life-changing ground-floor returns, it’s time to forget about Facebook, Apple, Amazon, Netflix, and Google” (FAANG stocks).

They’re simply too big now to keep up at the same growth rate as before. So what do we do? This is where the “experts” from The Fool come in, as they think they have found the next big thing – they call them the “Next FAANG” or “FAZER stocks”.

Some estimates suggest that there is about to be a new “Golden Age of IPO’s”, which could mint thousands of new millionaires. These ‘estimates’ come from none other than Motley Fool Co-founder and CEO Tom Gardner, who says that this is perhaps “the boldest bet of his 28 years as a professional investor”. 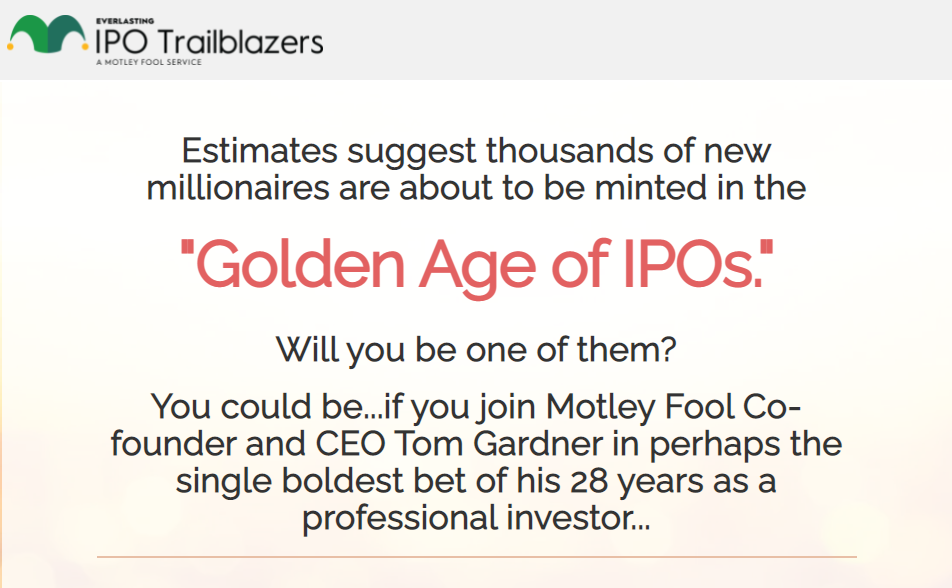 Tom Gardner co-founded The Motley Fool – the name taken from Shakespeare’s comedy As You Like It  in 1993 with a simple goal: “To help the world invest, better”. Since that time the investing advice company has grown to employ over 300 people worldwide, with several country specific websites covering their local respective markets. We have previously covered the IPO topic at length in the past, including with Jeff Brown’s SPAC “Pre-IPO Codes” and Paul Mampilly’s IPO Speculator.

The investor and author states that “if you’re expecting the traditional FAANG stocks to continue carrying your portfolio throughout the 2020s like they have for the past 10 odd years, you’re likely in for a rude awakening”. No disagreement from our part here.

The next part about five FAZER companies ultimately defining the next decade we’re not so certain about, but Tom thinks “it’s entirely possible that the next trillion-dollar-market-cap company could be among them!” A feat that just six companies and counting in stock market history have previously accomplished.

F – the edge computing pioneer that enables internet data to travel between different countries – and even continents – at warp speed.

A – at only $7.5B in market cap, this revolutionary software platform is singlehandedly replacing the concept of the in-house “tech team.”

Z – A radical video technology company changing the way society will communicate in the future.

E – the “next Google” that’s redefining the concept of search functionality as we know it, but at 77 times smaller than the current size of Google.

R – the silent king of streaming media that has set itself up perfectly to dominate tomorrow’s entertainment industry.

Apparently, there’s one other thing these stocks all have in common, as all five FAZER stocks are recent IPOs.

Before we can find out the names and ticker symbols of these five companies, we are told to join the IPO Trailblazers – a Motley Fool Service, for ‘just’ $1,999. Which will reveal the names of Tom’s FAZER companies.

The subscription also comes with a 30-day satisfaction guarantee and a myriad of features, such as ongoing stock recommendations, coverage of upcoming IPOs, an IPO university with educational videos, articles, and more.

What in the World Are FAZER Stocks?

If you’ve been paying even a lick of attention, then you already know that FAZER is just a made-up acronym for the five recently-IPO’ed companies that Tom is teasing in his presentation, with each individual company’s name starting with a letter.

Tom tells us that the IPO market is on a historic tear right now. In fact, The Wall Street Journal has even stated that new IPOs raised a total of more than $62 billion in 2019 alone. The highest figure since the height of the dot-com boom.

If this brings back unpleasant memories of IPO horror stories like Pets.com and eToys.com back in the dot-com days, you’re not alone, but we are reassured that ‘this time really is different’ and long gone are the days when a company with “little more than a business plan and a ‘dot-com’ in their name” could make millions simply by going public.

Simply put, by almost any metric, the slew of companies filing for IPOs today are much safer, older, and much more established than their “get rich, then get out of dodge” brethren of the late ’90s. We are told that Tom himself plans to make a $1,000,000 bet on this “Golden Age of IPOs” that will represent perhaps “the most daring and outrageous single investment” in his more than a quarter century as a professional investor.

This is because the single biggest killer of wealth imaginable to him is saying “if only I had invested in X from the very beginning!”. Without a shadow of a doubt, this single phrase has cost those people hundreds of millions, if not literally billions of dollars in wealth over the years…until now that is.

As Tom has found a way to know whether or not to invest in each and every company preparing to IPO, which he is going to demonstrate to us here with his IPO investigation picks. Let’s see what they are.

Since there is quite a bit to go through, lets reveal each one in the same fashion as they were first teased to us earlier in abbreviated format:

F – the edge computing pioneer that enables internet data to travel between different countries – and even continents – at warp speed. This is almost certainly Fastly Inc. (NYSE: FSLY), which is an edge cloud platform for processing, serving, and securing its customer’s applications.

A – at only $7.5B in market cap, this revolutionary software platform is singlehandedly replacing the concept of the in-house “tech team”. This is very likely Appian Corp. (Nasdaq: APPN), whose platform automates the creation of forms, workflows, data structures, reports, and other software elements that are needed to be manually coded.

Z – A radical video technology company changing the way society will communicate in the future. This is none other than Zoom Video Communications Inc. (Nasdaq: ZM), which provides a widely popular videotelephone and online chat service through a cloud-based peer-to-peer software platform.

E – the “next Google” that’s redefining the concept of search functionality as we know it, but at 77 times smaller than the current size of Google. This one was decidedly more difficult to pinpoint, but we think it may be Elastic N.V. (NYSE: ESTC). Elastic has a market cap of ‘only’ $14 billion and is working on a technology that will enable enterprise users to search through structured and unstructured data for a range of applications.

R – the silent king of streaming media that has set itself up perfectly to dominate tomorrow’s entertainment industry. We’re positive this is Roku Inc. (Nasdaq: ROKU), as it makes digital media players for video streaming. Think of it like an aggregator of various streaming services, much like cable systems were for television channels.

Are any or all of these recent IPOs going to obliterate the S&P 500 or other stock indexes with their performance?

Someone once published a study looking at IPOs and their long-term performance. It was written back in 2014, but it concluded based on empirical evidence that many of today’s IPOs suffer the same fate as the original IPO – United Dutch Chartered East India Company in 1602.  That is, they have an initial period of outperformance followed by a steady decline over the long term.

This is due to a multitude of factors, including IPOs having higher multiples than the market in general on their listing date as well other (simpler) strategies simply outperforming a broad basket of IPOs. We would venture to say that this time around likely won’t be any different and buying into businesses at their IPO price won’t yield outsized returns.

Have you made it a practice to buy newly listed stocks? What has been your experience? Tell us in the comment section below.