Jeff Brown’s “Global Token Exchange” Pitch – Just $25 to Get In? 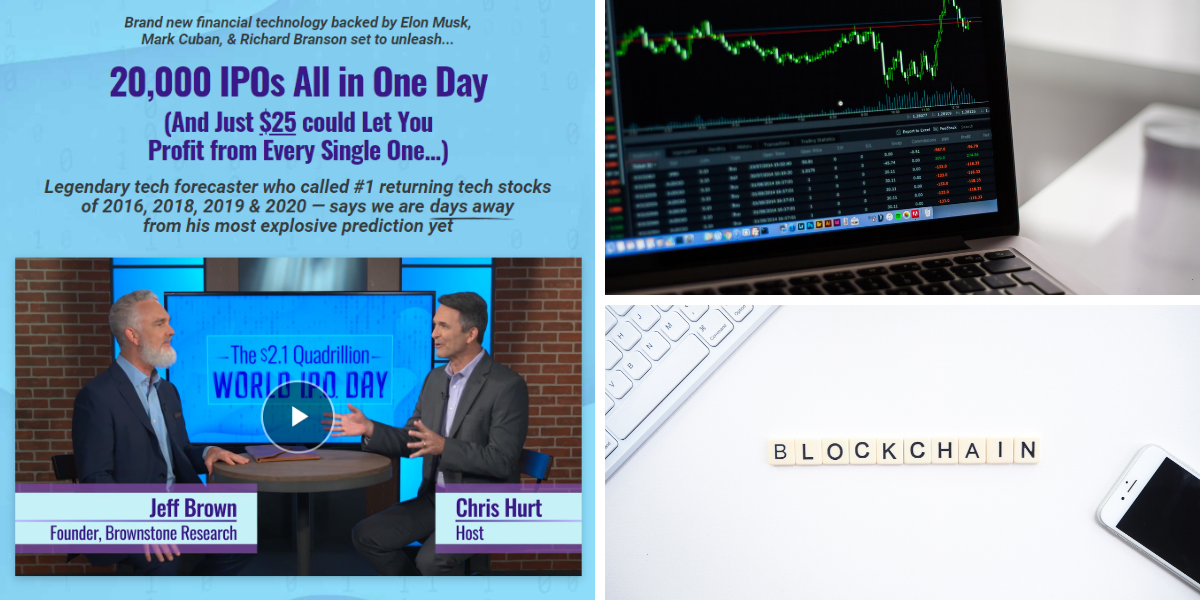 Host Chris Hurt and angel investor Jeff Brown suggest that “the biggest financial event in human history could be just days away”. What Brown is referring to here is the possibility of their being “20,000 IPOs All in One Day” from the tokenization of investments and what he calls the “global token exchange”.

This “exchange” will give us the chance to profit from every single one of these “IPOs” and Jeff is going to show us how. Let’s take a closer look.

Jeff Brown is here to help prepare us for an earth-shattering event that he calls “World IPO Day”. To put this into perspective, the previous record for IPOs was set in 1999, that’s the year in which a total of 547 companies went public. Now imagine an event 36x bigger – taking place not over a year, but in a single day! 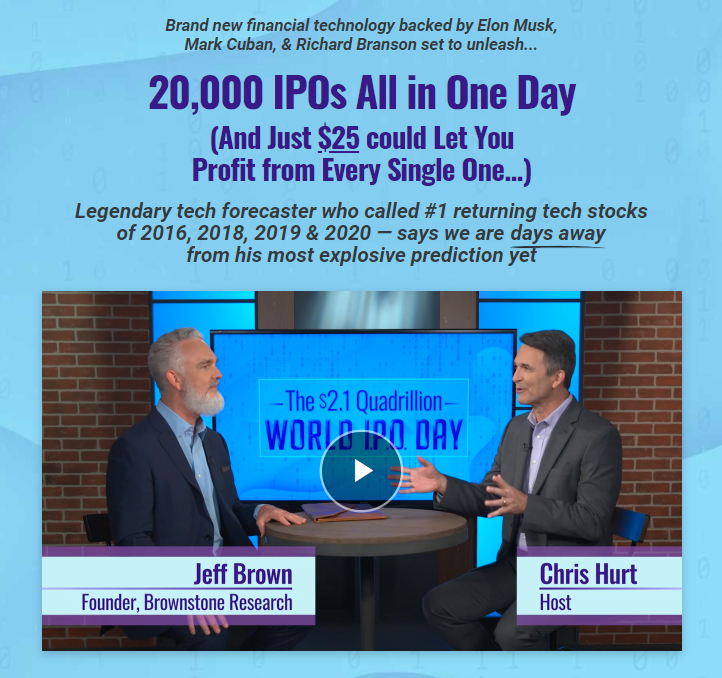 Jeff Brown is an angel investor and former tech executive, previously serving as President of NXP Semiconductors Japan. Brown has since accumulated over three decades of financial experience and now counts around 1 million subscribers to his investment newsletter programs. We have covered several of Jeff’s presentations and exposes’ here in the past: Is Jeff Brown a Fraud? & Jeff Brown’s Blockchain Stocks, among others.

Before we get ahead of ourselves and think that this is about expensive IPO stocks like Uber or Airbnb, private equity, SPACs, or crowdfunding, Jeff assures that he’s not talking about IPOs in the traditional sense here.

What is really being pitched here is a new technology called “G.T.E.”, which stands for Global Token Exchange. According to Forbes, G.T.E. could be “the next big thing” and the NYSE has also announced their involvement in G.T.E. These are some of the reasons Jeff believes this technology “will have an impact 113 times bigger than the Internet… 600 times bigger than 5G… and 1,000 times bigger than the stock market”. The author also promises to reveal the names and tickers of companies involved in G.T.E. — no strings attached, we’ll see about this.

What exactly is Jeff talking about here? What is G.T.E. and why are so many – from billionaires to large corporations so interested in this? By effectively securitizing things or alternative assets, instead of just stocks, G.T.E. is allowing us to apply the same idea — owning a piece of something— to the ENTIRE world.

Those already familiar with Brown’s presentation style know that he won’t reveal too much information for free. After all, the goal is to attract as many readers as possible into subscribing to one of his multiple investment newsletters. This presentation is no exception, with the author promoting The Near Future Report, which is perhaps his most popular service. It is now sold for a special price of just $49 per year, which also makes it one of the most affordable in Brown’s repertory. 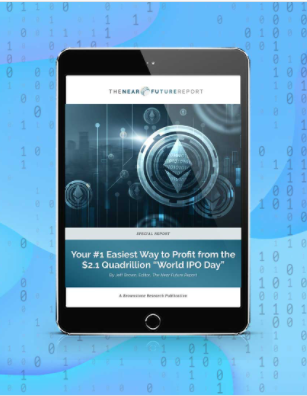 By subscribing, you will receive a free copy of the special report “My #1 Easiest Way to Profit from the $2.1 Quadrillion World IPO Day”, where Brown reveals all the details pertaining to this investment. Also included are 12 monthly issues of the report, three additional free special reports, access to Jeff’s Model Portfolio, exclusive member reports, and a 60-day money-back guarantee.

What in the World is “The Global Token Exchange”?

In 1602, the world’s first stock was born: The Dutch East India Company. Before then, nobody knew what a stock even was. The bulk of global wealth was private, until one simple idea changed the world:

“Splitting up a company into small pieces and selling it to investors.”

G.T.E. follows this same fractional ownership principle, by allowing us to apply that same simple idea to owning pieces of things, because this technology allows almost anything on earth to become tradeable. Think Michael Jordan rookie card, Picasso painting, even a $2.5 million dollar Kentucky-derby winning racehorse. 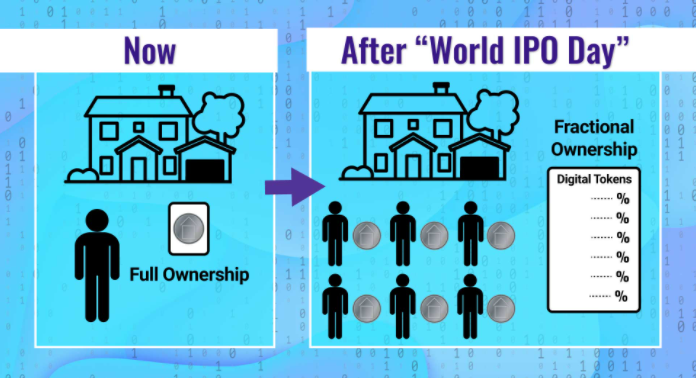 What Jeff is essentially talking about here is a paradigm shift, whereby everyone will have access to a brand new securities exchange where you can own and trade small pieces of alternative assets, such as buildings, jewelry, art collections, rare sneakers, and more. The only difference being, instead of getting a digital certificate that proves you own a piece of a publicly-traded company, you get a digital proof of ownership in your asset called a “token”.

Some so-called experts are expecting this “revolution” to take until 2025 to ramp up, but it is already getting underway with SEC Chairman, Jay Clayton saying:

“Our door is wide open – if you want to tokenize [investments] in a way that adds efficiency, we want to meet with you”.

Thus it comes as little surprise that this exchange is powered by the blockchain, Jeff says this is the technology that will single-handedly support the token economy. The European Union…yes the European Union is even introducing a proposal titled EIP-1559 to standardize blockchain transaction pricing via a fixed-per-block network fee that is burned and dynamically expands/contracts block sizes, which could also help send tokenization into hyperdrive on a global scale.

All of this could kick off a new $2.1 quadrillion market, which is “48x bigger than the current stock market”. In the coming weeks, trillions of dollars could start pouring onto this digital exchange. Up to 20,000 “IPOs” or listings of new assets, every single day and Jeff says that just $25 lets you profit from all of this. That’s right, Jeff is teasing owning a piece of this new securities exchange itself. Let’s try and find out the name of it.

Revealing the Name of the Global Token Exchange

As per usual, Jeff doesn’t provide us with many specific clues throughout his presentation, but he does offer up a couple of tidbits:

There are many token exchanges for digital securities either in development or already live today. However, finding one that is both publicly traded and selling for around $25 per share as Jeff pointed out earlier has proven a challenge, with only the much more expensive Coinbase Global Inc. (Nasdaq: COIN) fitting the description, as it is on the track to begin offering security tokens on their cryptocurrency trading platform soon.

UPDATE: A comment below from someone who seems to have inside information informs us that Brown’s pick here is Quorum, which is and Ethereum-based DLT (distributed ledger technology). That said, we haven’t confirmed this and have heard from others that the pick is Ethereum (ETH), which makes sense to us and can be indirectly invested in via the Grayscale Ethereum Trust (ETHE) for less than $25 at the time of writing this.

The US stock market is worth some $45 trillion today, an incomprehensible sum considering that only $1 billion dollars is said to be stackable from the ground to the moon in $1 dollar bills.

Considering that the private economy is estimated to be worth more than $1 quadrillion dollars, securitizing or “tokenizing” even a portion of it could easily rival or even surpass the stock market. From this point of view, any exchange on which the majority of these assets will be listed and traded is a huge opportunity.

Having said that, the rules of sound investing never change and the price/valuation one pays to invest in this token exchange will have to deliver value today even with the large potential growth trajectory.

Are you already invested in alternative assets? Do you see any potential downside or pitfalls to securitizing more and more of the private economy? Let us know what you think in the comments below.