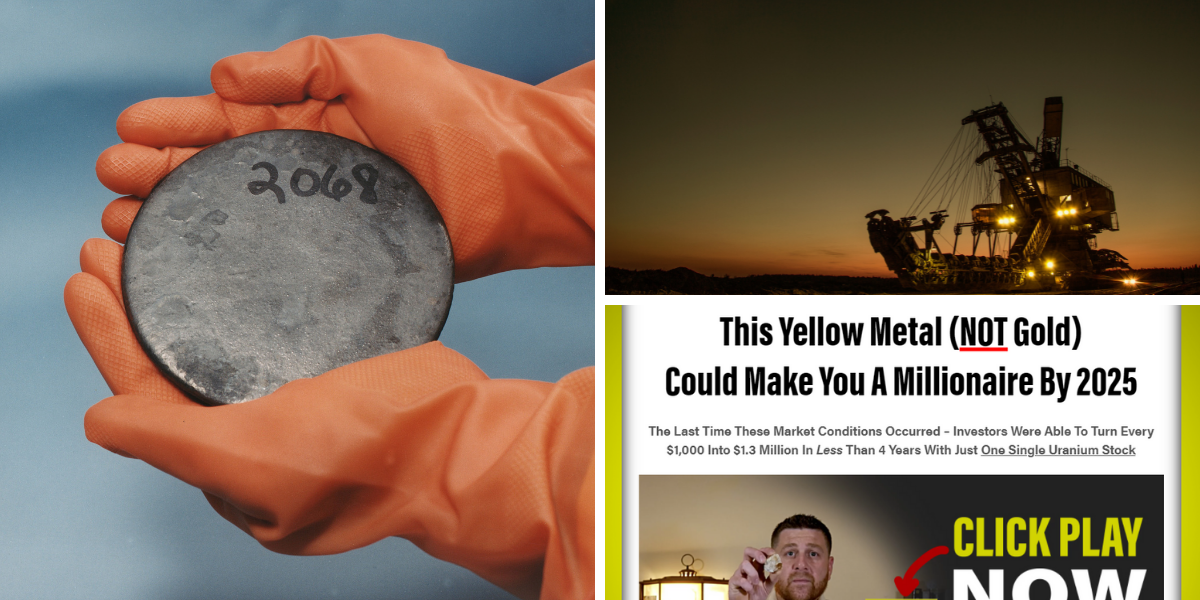 What “yellow metal” (that is NOT gold) could make us millionaire’s by 2025?

This is the question Nick Hodge from Digest Publishing poses to us before introducing mining investor extraordinaire Gerardo Del Real, who has found a single uranium mining company that could make us 100x our money or more. More specifically, look at the yellow metal embedded in the rock. That’s not gold, nor does it have anything in common with gold for that matter, other than that it is also a metal. But just like gold, the mining of this unique yellow metal could make investors incredibly wealthy, especially as it enters its peak supply/demand cycle, like it has only done twice in the past 50 years. Gerardo Del Real is Co-founder of Digest Publishing, and editor of Daily Profit Cycle. Prior to this, he purportedly spent a decade behind-the-scenes, providing research and advice to large institutional players, fund managers, newsletter writers, and some of the most active high net worth investors in the resource space. We have covered plenty of resource related presentations here in the past, including Casey Research’s Lithium Mining Company and Dave Forest’s “Tech Metal” Companies, to name just a few.

It’s been during these peak market cycles that tiny companies which mine this yellow metal have made investors up to 132x, 1,142x, even 1,300x their money. The latter is enough to turn $1,000 into over $1.3 million. Gerardo says we won’t see profit opportunities like this occurring in cryptocurrencies, tech stocks, pot stocks or anywhere else, because he’s already looked.

This is because the “yellow metal” we’re talking about here is providing the world with clean energy. In fact, it promises to be cleaner and safer than solar, wind, and every other kind of renewable energy COMBINED!

Worldwide demand for this yellow metal is set to skyrocket to unprecedented levels as the world shifts away from fossil fuels and multiple well-known billionaires like Jeff Bezos, Bill Gates, Peter Thiel, and George Soros have taken note, each investing millions of their own money into the sector that revolves around this metal.

Fortunately, we don’t need billions or even millions to profit, as Gerardo has discovered a tiny company, trading for under $2.00 per share, that’s positioned to corner the entire US market for this metal within the coming months.

Gerardo reveals this stock pick and more on this “once in a lifetime opportunity” in a new investor report he compiled called: “THE NEXT PALADIN ENERGY: The Secret of Turning $1,000 Into $1.3 Million”. The only way to get our hands on the report, is with a subscription to Digest Publishing’s flagship natural resource investment newsletter Junior Resource Monthly. This will cost us $199 a year and comes with 12 monthly issues, 24/7 access to Gerardo’s model portfolio, flash alerts, and three special reports, including the one highlighted here.

What in the World is “Yellow Metal”?

So what is the yellow metal getting all this attention and investment capital from millionaires and billionaires?

In one word it’s Uranium. This is the world’s #1 source of clean energy that’s bigger than solar, wind, geothermal, and every other renewable energy source COMBINED! It’s the only one with the energy potential to power the electrical grids for megacities, states, and even entire countries without interruption.

Some may not know this, but on a per capita basis, the U.S. is the world’s largest consumer of Uranium. A whopping one in five American homes already rely on nuclear energy, with many other countries following suit:

With the U.S. planning to dramatically increase its nuclear energy use in the coming years an issue arises and so does this investment opportunity. The country is almost entirely dependent on foreign imports for Uranium. To top things off, our biggest suppliers are Russia and its satellite states Kazakhstan and Uzbekistan, who collectively supply almost HALF of our Uranium needs.

Given the recent tensions between the U.S. and Russia, this is obviously not a good position to be in. But, this massive supply-demand gap is what provides us with the peak cycle profit opportunity that Gerardo has discovered, which is a tiny Uranium mining company that’s positioned to corner the entire U.S. market for this metal within the coming months.

He even goes so far as to call it “the next Paladin Energy”, which is a little-known Uranium mining company that delivered one of the largest investing gains ever during Uranium’s last peak cycle – an eye-watering 130,400%! Let’s see if we can find out the name of this so-called “millionaire maker” stock.

Gerardo drops only a couple of notable hints as to who this company is:

Based exclusively on this limited amount of information, we would venture to say that the Uranium mining company in question is Azarga Metals Corp., which has been bought out by enCore Energy Corp. (OTC: ENCUF). Here is what led us to this conclusion:

Make a Million in Less Than 4 Years?

To be completely honest, early-stage mining companies are some of the biggest moon shots you can take in the market, so the prospect of making triple digit, quadruple digit, and even higher gains are on the table. But they can also be very risky propositions.

For example, one of the risks associated with investing in early stage mining ventures includes the possibility that the company you invest in may never be profitable and may even go bankrupt, leaving you and other investors with little or no return at all.

If this prospect doesn’t make you squeamish, then parking a small part of your investment portfolio in speculative stocks like Azarga and other early-stage miners may be for you.

Is Uranium one of the best energy investments over the next few years? Leave a comment below with your thoughts.