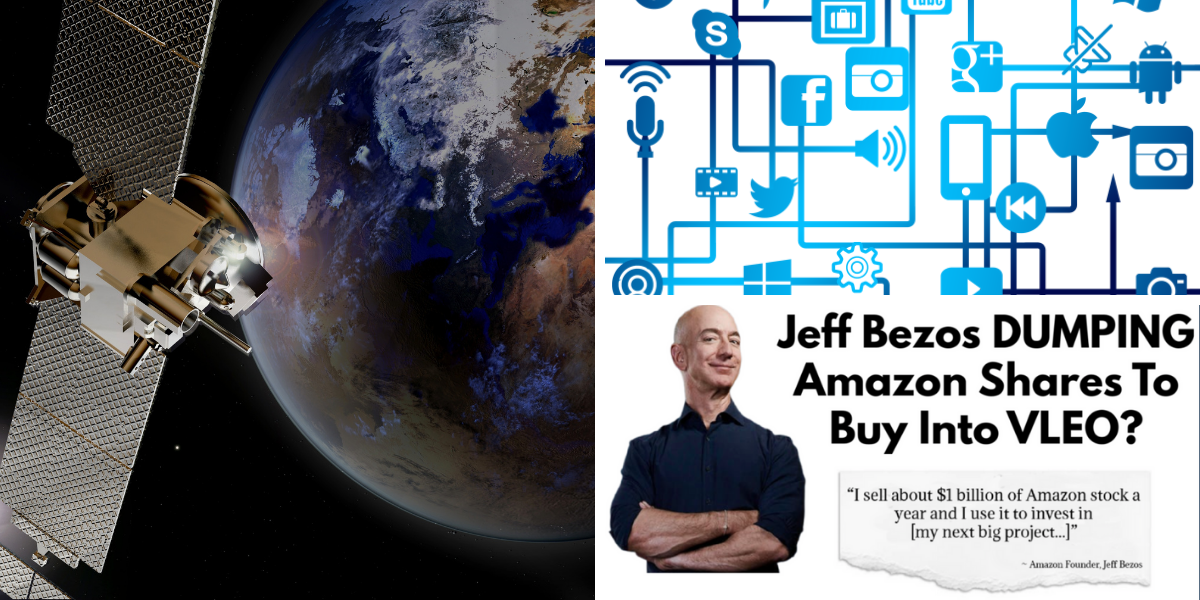 The Internet, space, electric cars, it seems that a handful of billionaires today are trying to take over the world. In this respect, it seems that little has changed since the time of the robber baron industrialists of the 19th century.

Lou Basenese is here to share with us intimate details about Jeff Bezos and Elon Musk’s push to “own the Internet” via Very Low Earth Orbit Transmission (VLEO) microsatellites, which are part of the secretive “Project Kuiper” that aims to deliver “everywhere Internet”. Let’s get into it.

Lou makes some pretty big claims in his presentation, but he does back (most) of them up with receipts. To start, we are shown an SEC Form-4, which shows that Amazon Founder Jeff Bezos recently sold some $1.8 billion in Amazon stock.

This in and of itself doesn’t tell us much, but we are next shown a quote from Bezos’ own mouth where he admits to “selling $1 billion of Amazon stock per year” in order to invest the proceeds into his next big project. 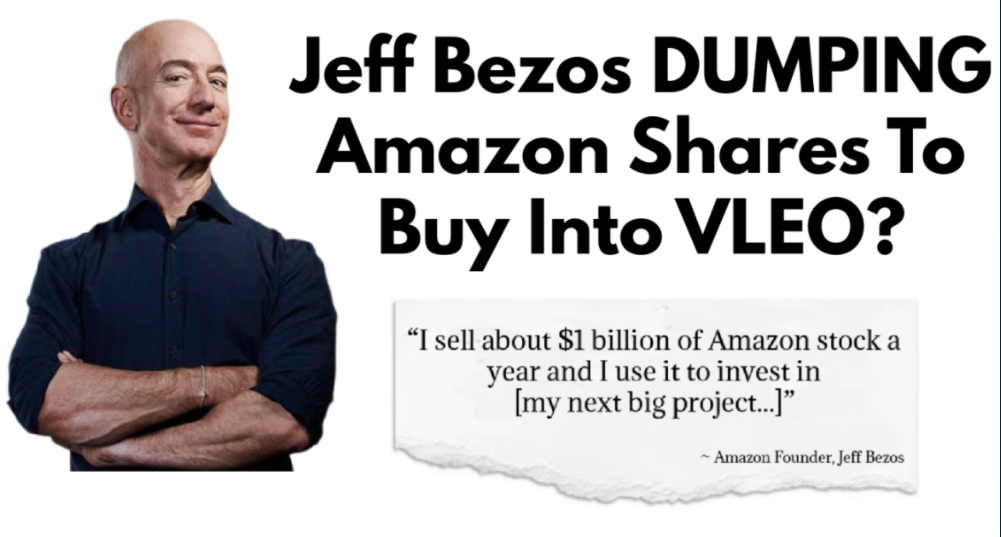 Lou Basenese is the creator and editor of Digital Fortunes, a new investment research service. The service focuses on revealing the most exciting and profitable trends, far before you read about them in major publications. Lou has over 20 years of experience analyzing markets, emerging trends, and technologies, and he’s developed a proven system for consistently profiting from them. Internet teasers are nothing new here at the Green Bull, as we have covered several just over the last little while, including Ray Blanco’s “Hypernet Company” and Alex Koyfman’s “Internet Fuel” Company.

This “big project” could completely dominate a $1.32 TRILLION industry, according to Lou, and potentially be even bigger than Amazon itself.

Its promise? “To beam you perfect internet wherever you are, at speeds 12x faster than you’re getting now, for what estimates say could cost you as little as $8.25 a month!”. Not too bad, even the Federal Communications Commission (FCC) has had to admit that Bezos’ innovation:

However, to make the biggest potential profits, Lou says you’ll want to position yourself and buy-in before September 7th 2021. Because that’s when it is estimated that Bezos could strike a “critical deal” for this new breakthrough.

For prospective investors, this “breakthrough” could send shares of one tiny company soaring in the process, and on the low end, Lou is projecting an investment in Bezos’ new Everywhere Internet could double your money and, on the high end, you could pocket up to 75x your investment!

In order to find out the name of the tiny $15 company that Bezos’ “Project Kuiper” may be partnering up with, you will have to subscribe to Lou Basenese’s Digital Fortunes investment research service at a cost of $149 for the first year. 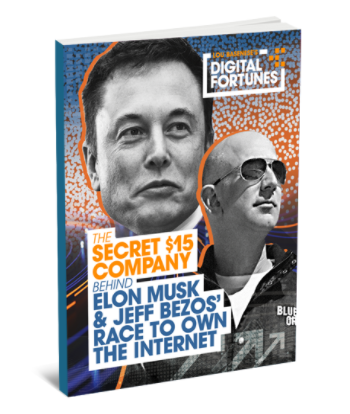 Included in this subscription price is the free special report: The Secret $15 Company Behind Elon Musk and Jeff Bezos’ Race to Own the Internet, a second special report entitled: “The One Space Move To Own EVERYTHING!” a third bonus report, and some other perks.

What in the World is Project Kuiper?

There is no denying the fact that the foundation of most profitable businesses over the last two decades, including Amazon, is the Internet itself.

Lou argues that this is the biggest business of all, as the US Internet, cable, and phone markets are now worth a combined $1.32 trillion. With Bezos’ new “Everywhere Internet” currently being developed and tested as we speak, with recent FCC approval in tow, it has a leg up on the competition. This includes Elon Musk, who has recently launched his own satellite internet project – Starlink.

Both of these projects – Starlink and Kuiper are using the EXACT same business model to blanket the earth with cheap, fast internet. To make this a reality, both are launching internet-beaming satellites into space, with Kuiper getting the “green light” from the FCC to launch 3,236 Very Low Earth Orbit Transmission (VLEO) microsatellites into the stratosphere. 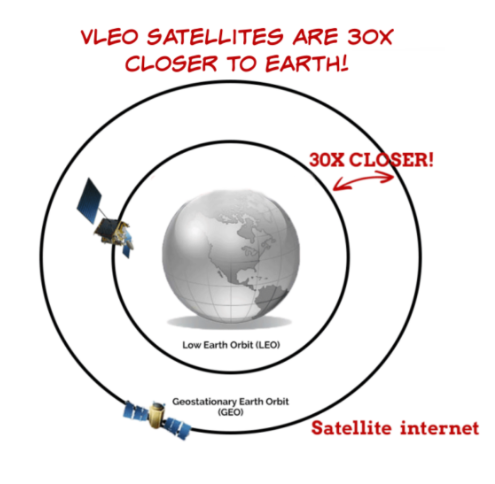 As you can probably already guess, such futuristic infrastructure does not come cheap. The Kuiper microsatellite launch is a $10 billion dollar project by itself, hence the need for Bezos’ Amazon share sales to foot its very hefty price tag.

Even with such sophisticated technology, Lou says there is a “fatal flaw” hidden in Project Kuiper’s process, in fact, it might be the only thing preventing Bezos from rolling out Kuiper right now. This is where our $15 company comes in, as it could potentially fix this fatal flaw and give us a “secret backdoor” into making a potential fortune from Bezos’ project, which is owned by a privately-held company.

Apparently, the single missing piece Bezos needs to flip the switch on this project is the antenna technology for the home terminals themselves. Which this one tiny company has the proven technology to provide.

So if you’re Bezos, what would you do? Spend months or even years to design and manufacture these terminals yourself or simply partner with…or better yet just buy out the world’s best firm that already has the necessary tech in place to make these terminals?

Bottom line, if Bezos doesn’t buy out this small $15 company, Elon Musk, who he is competing within the satellite Internet space may! Let’s find out the name of it.

Fortunately, there were some clues left behind that may help us solve this mystery once and for all:

Given some of these clues, they strongly hint towards Gilat Satellite Networks Ltd. (Nasdaq: GILT) being the secret $15 company. This is what led us to this conclusion:

Is it really the missing link the Project Kuiper needs? Is it worthy of an investment in its own right?

A quick glance at Gilat and we can clearly see that it is:

All of this tells us that the broadband communication equipment maker is a fairly good absolute investment.

We cannot say for certain whether it will make you 75x your initial investment (no one can), but you could do a heck of a lot worse in today’s low-value, high-price market environment.

What do you think of satellite Internet? Is it truly the future or does fibre optic wireless Internet still have a long runway ahead? Let us know what you think in the comment section below.