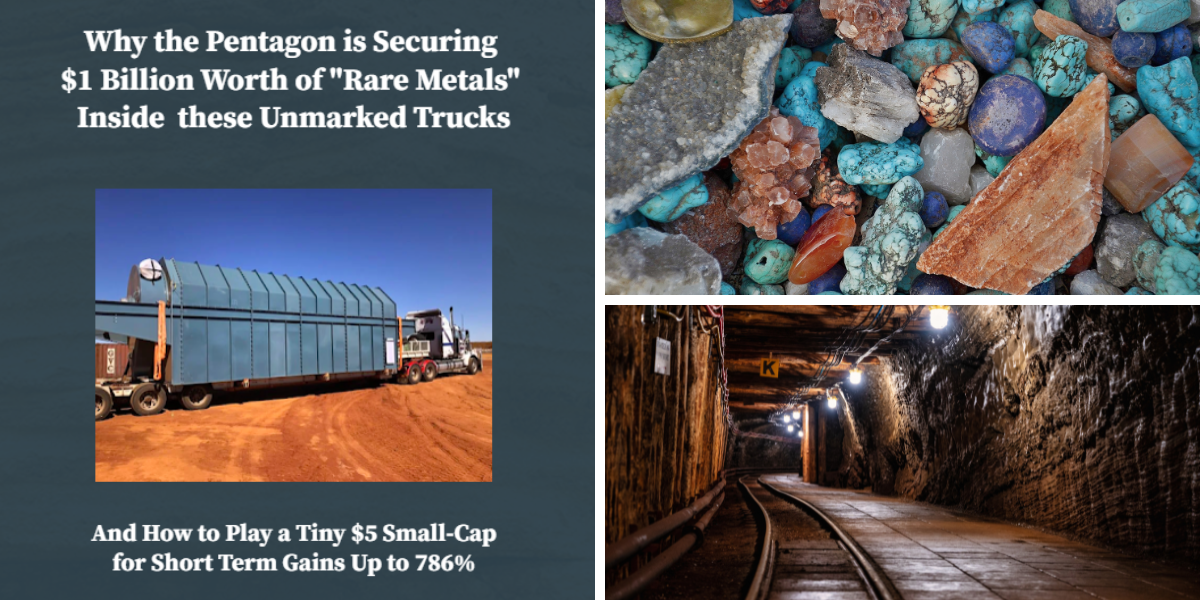 He’s talking about a Rare Earth Metal that is so valuable, it’s being stored in a brand-new facility that’s as secure as Fort Knox. One tiny company has an exclusive contract to secure this critical material and the gain could be massive.

The Rare Earth Metal in question is being loaded onto trucks like the one in the image below around the clock and the Pentagon is having these trucks sent to Texas.

This lets us know right away that this mystery material is a matter of national security.

Dylan Jovine is the founder of the Behind the Markets newsletter service and a veteran of the game. Having previously started and sold Tycoon Publishing to Agora Financial. I’ve reviewed some of Dylan’s picks here before, including his “War Games” Weapon Stock Picks and CRISPR Stock – A “Living Software” Company.

We’re told that without this material, our fighter jets wouldn’t fly…

And our missiles wouldn’t shoot

Not only this, but the material is needed for every single cellphone, satellite, battery, and car of the future.

If I were to venture an early guess, this material could be Nickel, Lithium or Neodymium. But it’s too early to tell.

The very Rare Earth Metals that are critical for much of the military’s arsenal, are 80% controlled by China.

They also own almost all of the Rare Earth mines around the world.

For example, nearly half the world’s supply of Cobalt can be found in the Congo. But China controls 15 of its 19 Cobalt mines. If they were to cut the U.S. off from its Rare Earth Metal supplies, it would be ruinous.

This is the primary reason why the Pentagon is backing the company Dylan is teasing here. The military desperately needs an alternative supply of Rare Earth Metals to continue to build its weapons. If we know its name, Dylan says we’ll be able to “book gains as high as 8,990%.”

The only to find out the name and ticker symbol of Dylan’s pick is by getting a copy of Unfair Advantage: This Rare Earth Stock Just Got Hired by The Pentagon.

For this, we’ll need a subscription to the Breakthrough Wealth research service. The cost for this advanced, specialized service that profits from Dylan’s network of Wall Street connections? Just $997 for a limited time. It comes with a 30-day money-back guarantee, 1-2 new recommendations each month, sell alerts to maximize profits, and more.

The Rare Earth Metals Critical for Over 200 Products

Dylan says we’re at the early stages of something huge.

The Senate just authorized $1 billion to double the national Rare Earth Metals stockpile and the Pentagon has handed one small firm $150 million to develop a brand new processing facility down in Texas.

This new plant down in Texas is going to be only one of two plants in the entire United States for these Rare Earth Metals. So what exactly is Dylan talking about here?

Rare Earth Elements (REEs) or Rare Earth Metals (REMs) are a group of 17 special metals consisting of the following:

Altogether, these are essential to producing over 200 products. From handheld radios, lasers, and GPS systems for the military to everyday smartphones.

With the sheer size of the national defense market, plus the wide variety of uses, not to mention the continued growth of EVs. Dylan has good reason to believe this may be the most profitable recommendation he ever makes.

Although Dylan’s pick is focusing on the electric vehicles market, which is estimated to be a $1.1 trillion market by 2030.

Their ability to produce massive quantities of Rare Earth Metals for just about any purpose, along with their Department of Defense contracts will keep them steadily growing for the foreseeable future. Even if the EV market doesn’t end up growing as fast as anticipated.

This may be a case of the right place, right time too. As the Senate has already passed a bipartisan piece of legislation to force defense contractors to stop buying rare earth metals from China by 2026. In the same vein,

The president has already used the Defense Production Act to fund the only Rare Earths Metal mine in the US. Which is going to supply one of only two Rare Earth plants in the US, one of which is owned by this tiny company…

We’re given quite a bit of info about this rare earths play. Here are some of the most telling.

Based on the set of clues, this has to be Lynas Rare Earths Limited (OTC: LYSCF). The clues all lined up:

Lynas Rare Earths is the world’s largest producer of rare earth products outside of the Chinese market.

The company was founded all the way back in 1983 and currently supplies about 20% of the global demand for rare earth elements. This makes it the most valuable independent producer of rare earth metals after China. Not too shabby.

No definitive word yet on when the proposed U.S. processing facility will break ground, but even without it, Lynas’ stockpile of proven and probable rare earth reserves is nearly 19 million tonnes. Combine this with the AUD$965 million currently held in cash and only AUD$190 million in total debt on the balance sheet and this commodity business looks well-positioned to thrive over the long term.

Is Lynas primed for triple or even quadruple-digit gains? Let us know what you think in the comment section.