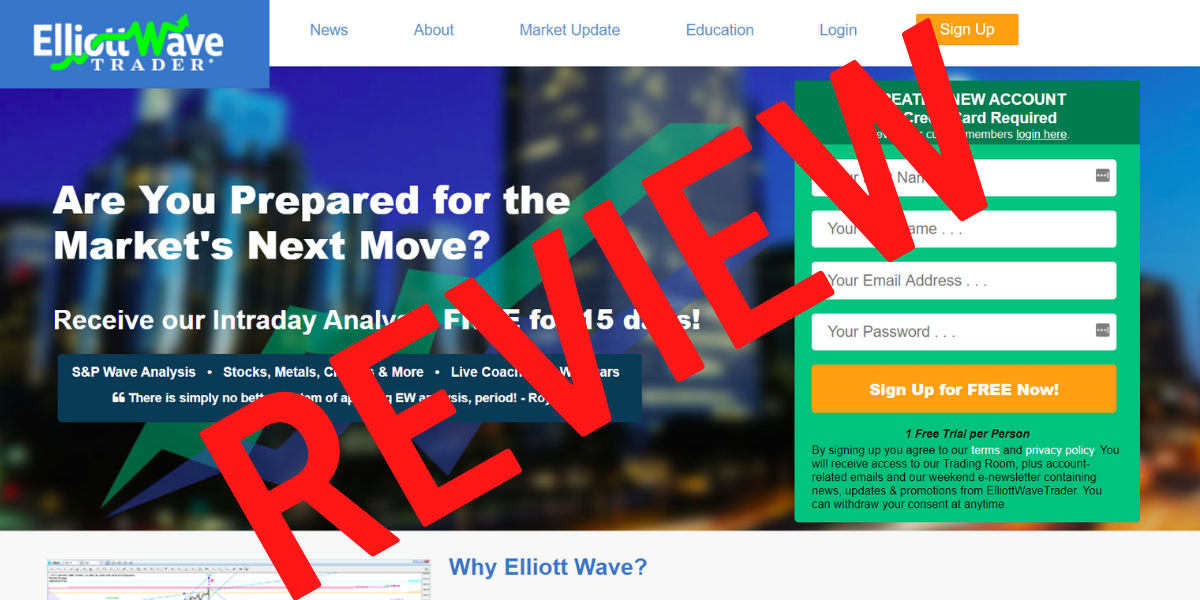 Avi Gilburt’s Elliot Wave Trader is a subscription based analytical service and the disclaimer is stated very clearly that it is not a trading recommendation or advisory service. The offering is very extensive in its range of trading market coverage. The more, or lesser controversial attribution of market trends to human impulse and sentiment (as it complies with Elliott Wave Trader theory) rather than more objective and increasingly automated review methods, is one of the Elliott Wave Trader’s main marketing features.

The main rational behind subscribing to a service like this is to acquire information that allows us to trade more profitably, does this service enable that? This Elliot Wave Trader review sets out to address these questions; what you get, pros v cons and more.

The Avi Gilburt’s Elliot Wave Trader system is a propriety, market analytical service provided by a 17 person strong team of analysts led by Avi Gilburt. The Elliot Wave Trader similarly to Andrew Keen’s Project 303, is but one of an exponentially growing number of similar services offering a ‘live trading room’.

Trading has become, in no small part due to the coverage and reach of the internet, a popular and possibly over promoted means of catapulting moderately resourced ‘Joe Soap’ to a position of transformational wealth. There are well documented cases of traders accumulating enormous wealth from well placed trades, but the vast majority of these claims are unsubstantiated and or exaggerated. The trendy ‘work smart and not hard’ ethos is fed by extravagant claims of traders accruing massive profits while needing to only spend a few hours a week executing trades based on information obtained from subscription services like Avi Gilburt’s Elliot Wave Trader.

The live trading room provides subscribers with live data viewable in the virtual trading room. In the increasingly competitive realm of subscription based trading advisory services, it is becoming more and more challenging for advisory services to differentiate their offerings from their competitors.  The Elliot Wave Trader analytical theory is certainly a differentiating factor, whether this theory with its attendant market analysis and interpretations is a reliably better way to trade markets is the subject of this review.

I signed up for the 15 day free trial period in order to get an authentic look at and feel for the offering.

Avi Gilburt’s Elliot Wave Trader is a trading analytical service that provides subscribers with access to a virtual live trading room where specialist market analysis across a range of market sectors is made in real time. The analysis is based on  Elliot Wave theory.

Elliot Wave theory works on the premise that public sentiment and mass psychology moves in a wave pattern that can be read and used to analyse market behaviour. At the core of the theory is the view that positive public sentiment moves in 5 wave sets and when this cycle of public sentiment is completed, then a subconscious reset of sentiment occurs resulting in a shift in the opposite direction. This is supposedly attributable to natural human behavioural patterns and not the product of extraneous news events.

Avi Gilburt asserts that no less an economic luminary than the former Chairman of the US Federal Reserve, Alan Greenspan subscribed to the Elliot Wave Theory. Mr. Greenspan famously told the Joint Economic Committee that the stock market is “driven by human psychology” and “waves of optimism and pessimism. Mr. Greenspan may well have spoken those words but Avi Gilburt’s interpretation is patently subjective.

Avi Gilburt postulates the theory that man’s progress and regression, advances in the sequence of three steps forwards and followed by two steps back. Referenced reading is, Elliot Wave Principle by Frost & Prechter.

Avi Gilburt digs down deeper into the Elliot Wave theory and theorises that each impulse wave subdivides into five sub-waves and that this subdivision occurs infinitely. His interpretation and implementation of this deeper analysis is what Avi Gilburt “lovingly” calls his Fibonacci Pinball.

In an expansive and detailed explanation of his Fibonacci Pinball strategy, Avi Gilburt illustrates the efficacy of the methodology in determining when to take profits or points at which to set stops. The graph below illustrates the sub-waves in the impulsive waves (five phases) and the corrective waves (three phases).

Who is Avi Gilburt?

Avi Gilburt is a trained accountant and lawyer. A top academic achiever, he graduated with economics and accounting majors and passed the entire CPA exam shortly after graduation. He obtained a Juris Doctorate from the St. John’s School of Law, New York and later obtained a (LL.M.) masters of law in taxation from the NYU School of Law.

Avi Gilburt co-founded ElliotWaveTrader.net in September 2011 with Richard Hefter and Advice Trade. Prior to starting his trading career, he was a successful lawyer, working as a partner and national director at a major national firm. In the course of his legal career he steered several major acquisitions with values ranging from millions to billions. This background has given him a thorough grounding in assessing the workings and valuation of businesses.

Forced to withdraw from his accounting and legal practice by the serious illness of his second wife, he initially started day trading to supplement his household income. In the pursuit of his hobby’ of researching various methods of stock market analysis, he arrived at the conclusion that Elliot Wave theory was the only analysis method that made sense to him. He formed an alliance with Harry Boxter of TheTechTrader.com and became a subscriber to the sight. Members of the sight and Harry Boxter noticed his top and bottom target recommendations for stocks and equities were quite accurate.

Harry Boxter encouraged him to establish his own advisory service and live trading room, he introduced him to Richard Hefter, who despite initial scepticism regarding the concept of Elliot Wave trading was convinced to get on board with the establishing of the ElliotWaveTrader.net and the development of the platform.

The short answer to the above question is a conclusive yes. Avi Gilburt is a highly respected analyst with an extensive and credible track record. The list of specialists contributing to the ElliotWaveTrader.net analytical service is comprised of more than fifteen highly accomplished analysts. The ElliotWaveTrader.net service has existed since 2011 and has a growing membership of more than 5000 subscribers, many of whom give glowing testimonials as to the service’s accuracy. There is an extensive reference library of past ElliotWaveTrader.net market analysis and the quality of this analysis can be back-checked in terms of actual market performance.

The numerous positive testimonials from subscribers are not independently verified but there is much information to support the claims made by ElliotWaveTrader.net . Examples are given of past instances where the service has made accurate analysis in periods of real and predicted economic upheaval. The July 2011 prediction made by Avi Gilburt that the US$ would stage a multi-year surge from 74 to a target of 103.53, was realised in January 2017 when the US$ reached 103.82 before receding, again as predicted.

When the 2016 US presidential election was looming there was much apprehension among many investors, concern was rife that the market would crash if Donald Trump won the election. Avi Gilburt correctly predicted that the election outcome would not impact stock market trends.

Past predictions by him can be found online on MarketWatch  and NASDAQ websites. There are numerous testimonials by both subscribers and free trial users, many of them commenting that extensive back-checking of his  analysis with actual market events, revealed a great degree of accuracy.

As is the case with many trading advisory services, the analysis of Avi Gilburt’s Elliott Wave Trader cannot offer an ironclad guarantee as to the accuracy of the analysis. The declaration that the service is analytical and not an advisory service may well be intended as a disclaimer of sorts.

The ‘recommended’ trading strategy is based on Elliott Wave analysis and the deeper application of Avi Gilburt’s Fibonacci Pinball analysis.

The trend towards large numbers of varied, added value offerings and teams of eminent analysts and advisers as utilised by other trading advisory services is also a feature of the ElliottWaveTrader.net.

While EWT outlines various scenarios under which they may unilaterally terminate the service, no mention is made of a refund policy.

The Avi Gilburt’s Elliott Wave Trader analytical service is an offering that has unique features not offered by the myriad of other trading advisory services. The underlying theory of Elliott Wave Trading applies a wave pattern to interpreting the effects of human sentiment as it manifests in trading patterns. EWT emphasise that their offering is a market analysis and not a trading advisory service. The Elliott Wave Trading system and the further developed Fibonacci Analysis are complex analytical methodologies that require a studious approach to gain an effective understanding. If the offered analysis is used in combination with other market information sources it is probably of significant value.

The EWT analysis in utilising the expertise of it’s large group of specialist analysts, covers an extremely wide range of the trading spectrum. This extensive range of analytical information is in all probability beyond the needs of most individual traders.

For the serious or more established trader who is prepared to put in the effort required to understand the Avi Gilburt’s Wave Trader and Fibonacci Analysis, the service is probably worth including as part of a trader’s wider information portfolio.