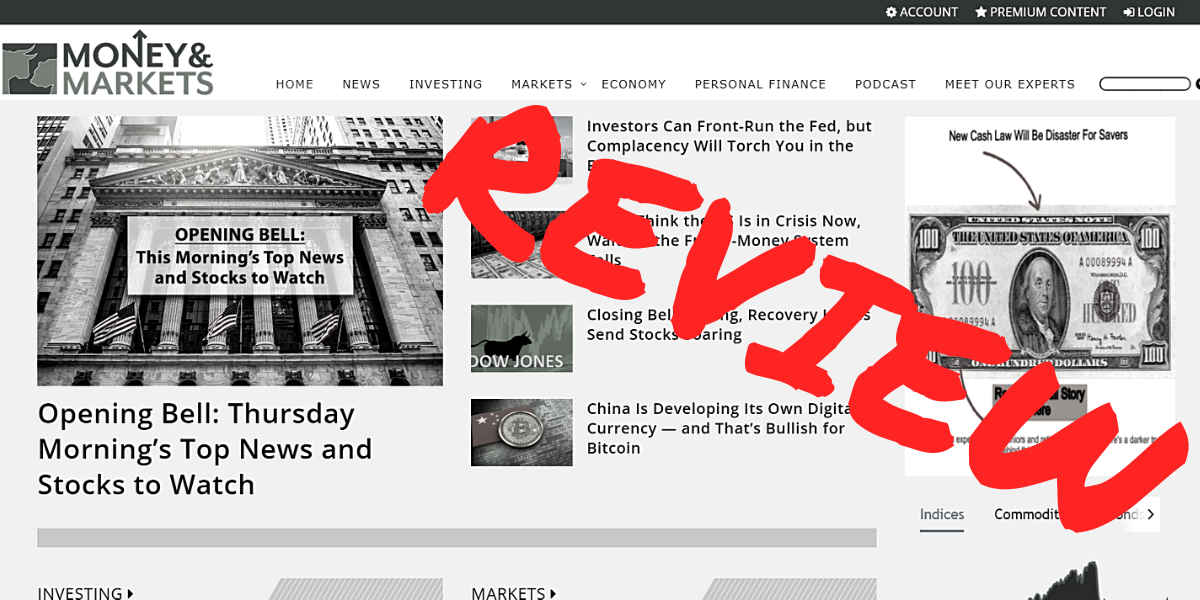 Is Money & Markets legit and can you trust them? There's a good chance you received some emails from them about some amazing new opportunities, thought they sounded a bit too good to be true, and decided to look into things more.

How do I know? Well, because I've wondered the same thing, and so I decided to do a little good old-fashioned research to see if this place is a scam or legit.

In this review I'll be going over what Money & Markets is, what they offer, some complaints, and more.

Let's begin with an overview...

What Is Money & Markets?

Money & Markets claims to be "America's Premier Source for Financial News & Advice", but is seems that just about every publisher of financial information will make claims somewhere along these lines, so you have to take this statement with a grain of salt. But anyways, what this website provides is information "to protect your nest egg, grow your wealth, and safeguard your financial wellbeing". And, as I'll go over, they provide such information via free articles, podcasts and premium research advisory services.

It's also worth noting that their core values include the belief in free markets, individual liberty, limited government and traditional American values. They often offer contrarian information that goes against what the mainstream media is saying, and this information can be very broad and cover a wide range of topics.

On the website they don't really provide much of any information about themselves, other than that they provide financial information and whatnot. However, after doing some digging around I've uncovered whats going on here.

There were some comments I found online about Money & Markets being run by the Weiss Group. However, I couldn't really find the connection between the two. Then I looked into the address listed for Money & Markets, which is...

It turns out they have the same P.O. box address as Banyan Hill Publishing... and Weiss Group has since joined forces with Banyan Hill. So now it all makes sense... Money & Markets is owned by Banyan Hill.

This makes even more sense when you go to their website and see that there are a bunch of ads for different advisories that are published by Banyan Hill all over.

Yes, there is no reason to say that they aren't. That said, they are big fans of running hyped-up promotions and these can be somewhat misleading, and seem scammy. But the company itself is legit, just as the parent company, Banyan Hill, is.

Can you trust their advice?

As always, we recommend doing your own due-diligence before following any advice. They have some contributors that are seasoned market veterans and who know a great deal. However, as I'll go over, things seem to be a bit of a mess at this company and there are many people I was unable to find any information on.

How do I cancel a subscription?

You can contact them via phone to cancel any subscriptions you have. Their numbers are listed as:

And if that doesn't work then you can also try messaging them through their Facebook page.

What They Have to Offer

They offer both free and paid information. On the website there are a variety of menu items, such as news, investing, markets, economy, etc., in which you can go to and find articles related to these area - this is where you can get free information.

To give you a better idea of what type of articles they publish on the site, here are a few examples of what's available to me right now:

That's just a small taste of the variety you can expect to find. They cover a lot of different things and there are numerous articles being published on the website every day.

Additionally, they also have a podcast that you can listen to called Bull & Bear. Here they talk about all sorts of things related to finance, the market, economy, etc... and experts from both Money & Markets as well as Banyan Hill are featured here. 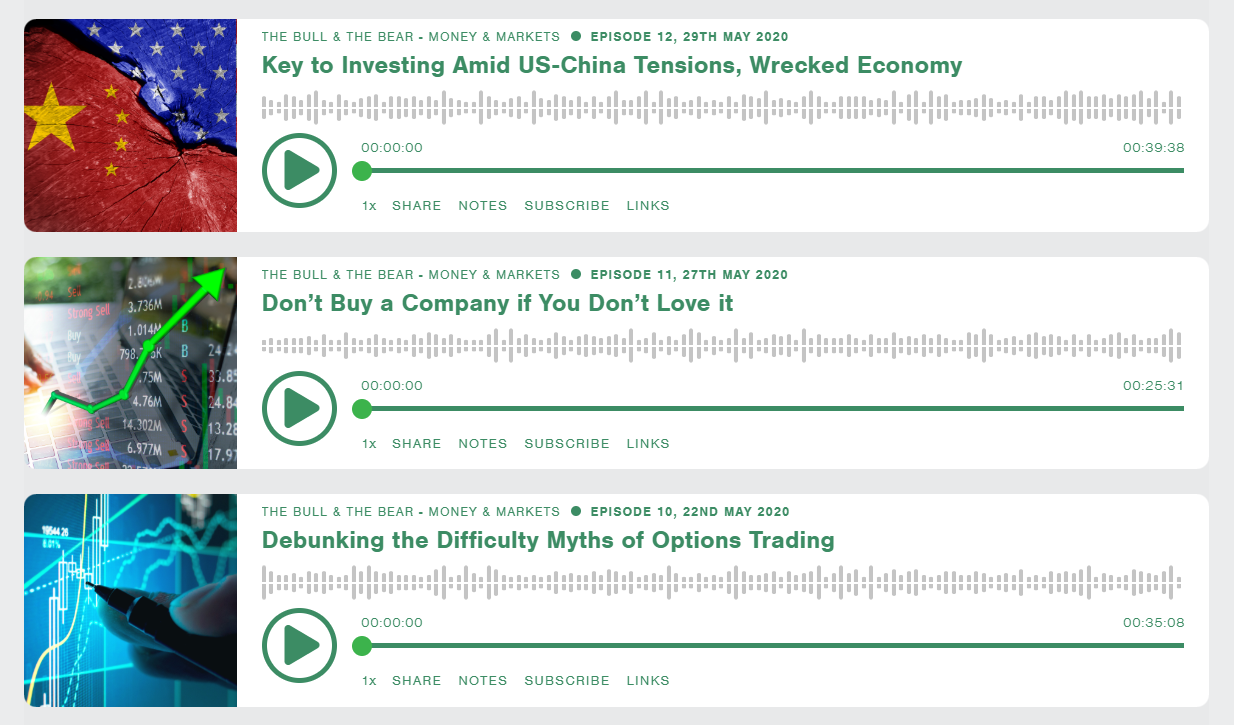 How do they make their money?

You may be wondering, since I just mentioned that much of the information they provide is free.

Well, if you've been on their website then you've probably noticed all the promotions. They are paid to promote investment services for other investment advisory firms, and this is how they make much of their money.

And of course they also offer some of their own premium investment advisory services, such as Adam O'Dell's 10X Profits and Green Zone Fortunes, which provide subscribers with investment recommendations on a regular basis. Right now they don't offer much, but their offerings will likely grow in the future.

Who It's Best Suited For

Well, obviously their services are best suited for those looking to make some money, but I'm guessing that this includes 99.9% of people on earth. To narrow things down further, their services are a better fit for people who have a strong sense of liberty, favor a free market, and aren't big fans of government interfering with either of these. The libertarian and republican audience is who they target most, and this makes sense.

It's also worth pointing out that you'll likely hear some contrarian ideas coming from the experts here at Money & Markets. They often go against the grain and bring about ideas that often aren't heard coming from the mainstream media. And of course they provide information on a lot more than just making money. Saving money, avoiding taxes (legally), trading strategies, news events, etc.... are all fair game.

So, if you like to hear contrarian perspectives on things, are fans of free-markets and liberty, and would like to be kept up-to-date on all sorts of things dealing with, well, Money and Markets, then the information and services on this site might be a good fit for you.

A Problem I Have: It's a Giant Mess

One big problem I encountered while looking more into things at Money & Markets is that there is hardly any information on the people running the show! There are editors publishing articles that I can't find any sort of biography on or any information at all on.

Now some of these names I recognize, such as Michael Carr from Banyan Hill Publishing and Chris Cimorelli who was an author at the Economy & Markets website (now directs to money&markets.com) - and I know Adam O'Dell is a strategist on the team, whom is behind "The 10X Switch" - BUT, most of the people here I just don't know anything about (I'm talking about their staff that is writing the free articles).

Not only that, but I noticed several investment advisory websites are now closed down and simply redirect you to moneyandmarkets.com. Now this is just a guess on my part, but it seems that there has been a lot of buy-outs going on and that the team behind Money & Markets, which is part of Banyan Hill, is kind-of just consolidating a bunch of websites and information into one website.

It's really confusing honestly, but this is my guess.

It would be nice if they would provide a bit more thorough and clear information as to what the heck is going on here rather than putting most of their efforts into spamming email lists with new investment opportunities.

Besides the complaint I just went over about their being a severe lack of information on the people behind it all, there are also a number of familiar complaints I found while doing my research. However, since the company has changed hands not all that long ago and some of the complaints are older, I don't know how relevant they are now. So much has changed with the company.

Some of the complaints I've come across include things like spammed with emails that are "inflammatory" and having trouble canceling subscriptions. And since it's now owned by Banyan Hill, I wouldn't be surprised if these complaints continue... since Banyan Hill has also been known to make cancellations a pain in the butt and to spam promotional emails like crazy.

Money & Markets is a provider of financial information, much of which is investment advice, but they also provide a broad range of information related to life, liberty, and wealth. I think a lot of people could benefit from the free information they provide, and I know a lot of people are looking for follow-along investment advisory services, such as what they offer. But the choice to join any of their services or to follow any of their advice is ultimately something you'd have to decide for yourself.

Their operations are a bit too messy for me or anyone here at Green Bull Research to recommend them, but I'm definitely not saying to avoid them either. Just use your own due-diligence, that's all.

Hopefully you've found this review valuable. Take care and be sure to leave us any comments down below. We like to hear back from our readers!