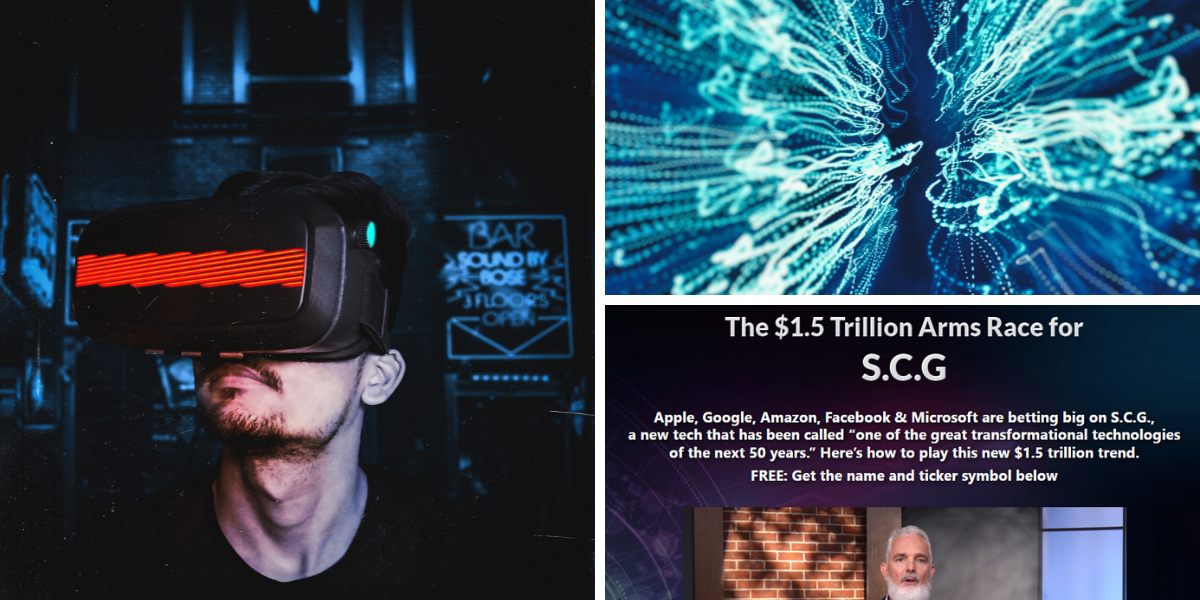 Hearing that something “will ultimately replace smartphones and make them obsolete” will probably be among the most shocking headlines you will read today. This is exactly what tech expert Jeff Brown is predicting.

That’s because a “new S.C.G. technology that’s projected to grow 4,572% will soon replace all 6.3 billion smartphones on the planet”, making investors rich in the process. Let’s find out if this will be the case.

Jeff Brown starts by saying that his brand-new iPhone 13, which costs about $1,000 will soon it will be worthless and it’s all because of a revolutionary new device, which is an early version of something known as S.C.G. 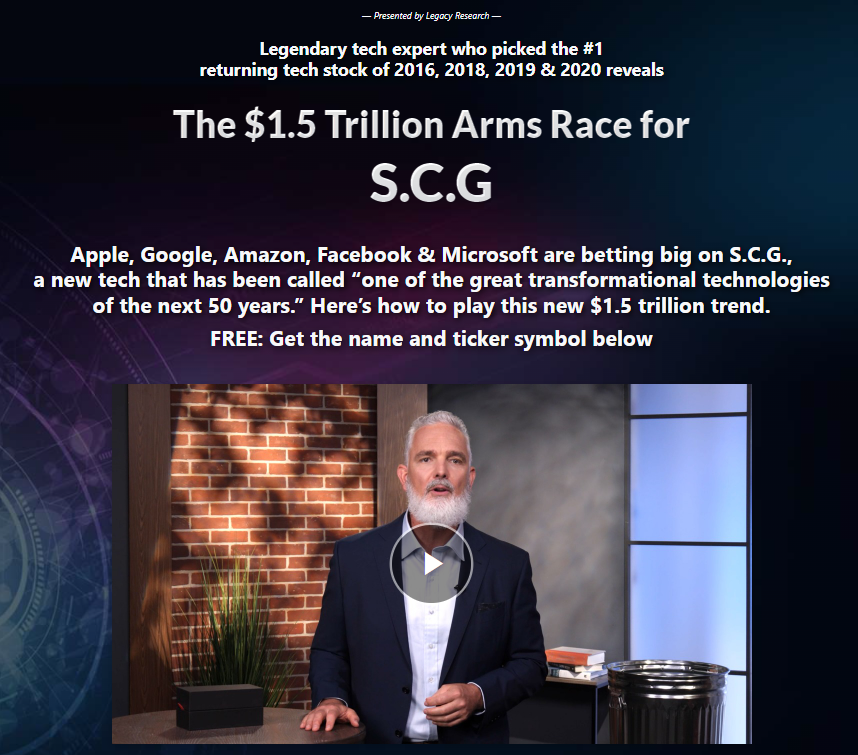 Jeff Brown is the founder and the chief investment analyst for Brownstone Research, where he is also the editor of several of its publications, including The Near Future Report, Exponential Tech Investor, and the Early Stage Trader. Jeff has over 25 years of experience in high-tech, which allows him to identify trends before they take off. Jeff Brown’s presentations have become fixtures here, with two of the most recent being Jeff’s Apple Car Partner Company and his “Global Token Exchange” pitch.

Jeff believes S.C.G. will not only kill the iPhone, but replace all the 6.3 billion smartphones around the globe. A big claim and one with major ramifications for the global telecom services market, which was valued at USD $1.6 trillion in 2020.

Our presenter admits that this may all sound a little crazy, but he assures us that he’s not the only one saying this, with the CEO of Apple Tim Cook even weighing in: 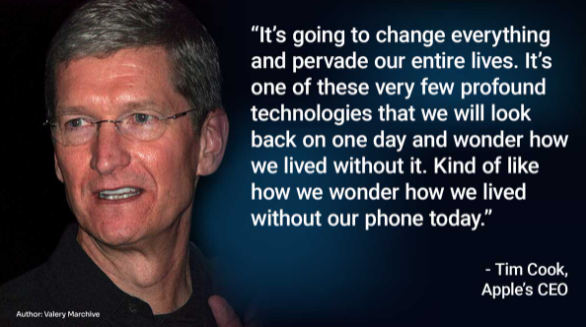 To be fair to Tim and more importantly our readers, we do not know if that quote was taken out of context, as this is exactly the way it was presented, but we digress. Apple has allegedly also earmarked a whopping $430 billion to invest in this new technology…which may be a typo. But they are not alone, as Facebook has also been investing $18.5 billion every single year in this technology since 2014′ up until its recent announcement of building a ‘metaverse’. Jeff says Google, Microsoft, and Amazon are all also exploring this technology.

This means the biggest and most powerful tech companies in the world are all betting big on S.C.G. as the next major computing platform that will replace the smartphone. At the heart of this is a little-known company that’s set to skyrocket as this new S.C.G. device, which stands for Spatial Computing Glasses takes over the smartphone market, but more on this later.

In this particular case, the pitch is for Brownstone Research’s The Near Future Report newsletter, which costs $49 in your first year and $129 every other year after that, with a 60-day money-back guarantee.

A subscription will include the special report The #1 Stock for the $1.5 Trillion Spatial Computing Revolution, which names the company and its ticker symbol and includes other perks, such as three other bonus reports, access to a model portfolio, and full call and email support from a dedicated team.

Is There Really A Spatial Computing Revolution? 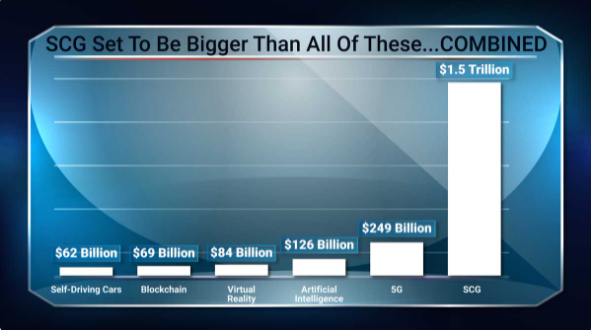 Jeff proclaims that in his “30-year career as a tech executive and angel investor, he’s never seen this kind of arms race before”. But if this trend is to usher in a new computing age, it will have to first overcome the challenges posed by the limits of computing power. Jeff has an answer for this too and says he’s expecting a huge announcement “any day now” from one of the aforementioned tech giants that will set this whole trend on fire.

Indeed, some stocks involved with spatial computing technology are already skyrocketing, such as ePlay Digital, the augmented reality eSports platform, which has jumped 1,600% since last November. Or Kopin Corp., the maker of ultra-small LCD, ferroelectric LCoS and OLED displays, which has seen its shares increase by more than 5,000% since last April.

This indicates that the tech is consumer-ready right now, rather than still a couple of years away. Meaning that the type of triple and quadruple digit gains that Jeff hints at, may just be a possibility rather than a pipe dream. The truth is, smartphone sales have dropped for the last two years straight and all the big tech players have been investing billions in search of the next big thing, which is spatial computing and there’s one little-known company that’s set to benefit from this projected $1.5 trillion mega trend.

At its core, spatial computing is the virtualization of activities and interactions between machines, people, objects, and even environments. In layman’s terms, this means that we will soon be able to to view information and use the internet much like how we do with our smartphones today, except this will all be totally hands-free via spatial computing glasses. Admittedly, this sounds like something straight out of a Terminator movie, but lets see where Jeff is going with this…

Revealing the #1 Stock for the Spatial Computing Revolution

Jeff holds that in his experience, in order for a new piece of tech to sell more than a billion units, it needs to not only be affordable, but it also needs to be easy to use and visually appealing to users. This starts our set of clues:

Given the limited set of clues here, we’re nowhere near 100% certain about this one, but we think that the Apple glasses supplier could be Corning Inc. (NYSE: GLW). Here are some giveaways:

Spatial Computing has far reaching implications, far beyond virtual/augmented reality. The word ‘spatial’ itself refers to both time as well as physical space and the array of applications includes everything from wearable tech to monitor temperature, general wellbeing, etc. to sensory-enabled real-life spaces, like ad billboards in Times Square and more.

How big can the spatial computing glasses promoted in Jeff’s presentation get, to give you an idea, during China’s latest Singles Day shopping spree in November of last year, Qiyu’s VR headsets ranked number one in sales on JD.com. This could become a reality stateside, with Apple or another provider’s glasses being the number one selling item on Amazon this Christmas or the next.

From this standpoint, buying into the right supplier stock or a basket of companies associated with this emerging technology could very well yield above-average results.

Do you already own a set of VR/AR glasses? Or is it still too early to be talking about mass adoption of this tech? Let us know what you think in the comment section below.