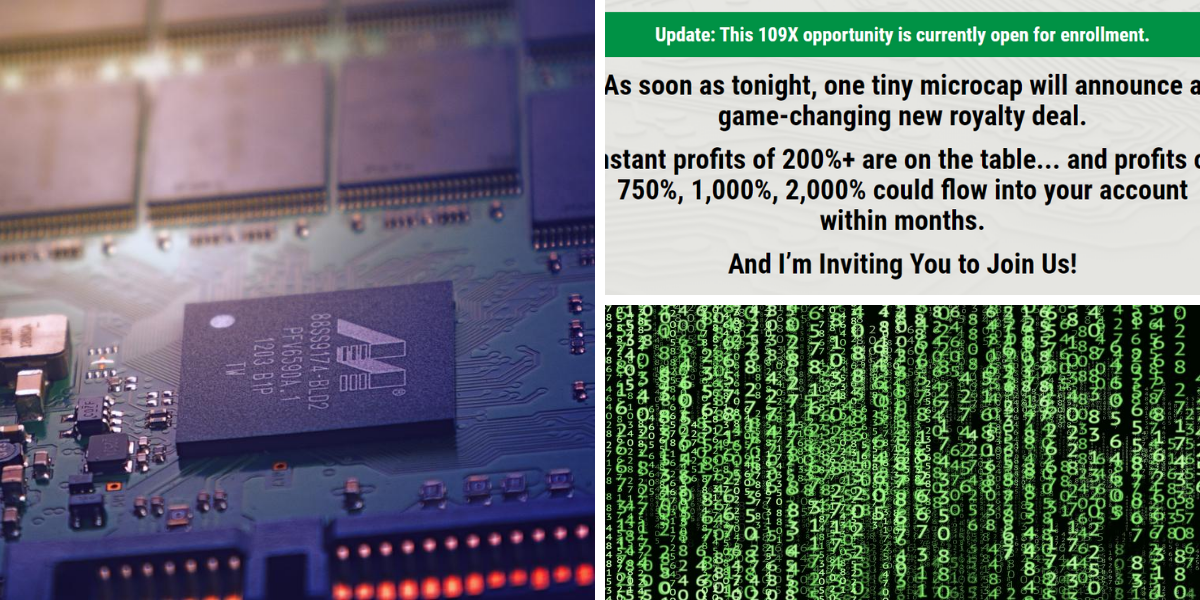 How would you like to turn as little as $3,000 into $18,750 profit overnight? What would you say if you were on the verge of investing in what can potentially be one of the greatest tech revolutions this century? These are the claims teased in Chris Wood’s Micro-cap Microchip Company newsletter that was recently released.

Wood teases “instant profits of 200%+” and “profits of 750%, 1,000%, 2,000% could flow into your account within months”. By subscribing to Chris Wood’s latest newsletter, you’ll get plenty of bonuses, briefings, and reports, including the author’s latest briefing, “Buy This Tiny Micro-cap Before Its Breakthrough 109x Announcement.”

According to Wood, his Project 5X program would cost you $4,000 but, as you would have guessed it already, he’s willing to throw in a huge discount if you act on it now. The urgency of subscribing to his newsletter is depicted throughout the teaser, asking you to “take action as soon as possible”, so you can benefit from his stock investing prowess and get the most out of your money soon.

The advertised Chris Wood’s Micro-cap Microchip Company brief would cost you $2,497 per year if you were to subscribe to the newsletter and an additional $1,000 for the two-year subscription, which is described as a game-changer. To make the deal more appealing, Wood is throwing in a lot of bonuses, including 12 issues of the Project 5X Research, 24/7 access on a members-only website, and special reports such as “3 Disruptors That Could Be the Next Apple, Amazon, or Netflix” and “5G Royalties: How We’ll Cash In on 2020’s Biggest Boom.”

If you can’t afford to pay $2,497 per year for some potentially beneficial stock tips, we got you covered as we are going to be exposing the company Chris Wood’s teases for free later in this article. But first, let’s start with the basics…

Who Is Chris Wood and are his financial predictions any good?

A former money manager and the current CIO of RiskHedge, Chris Wood has had a fruitful career on Wall Street before striking out on his own. With years of experience in the financial field, Wood claims to have developed “a proprietary formula” that allows you to invest in micro-caps before they spike, teasing a “4-word secret” he then reveals as “Tiny stock. Big Breakthrough”.

According to Chris, there are over 2,000 micro-caps in the U.S. alone, but only some 1.2% of them are likely to see an overnight spike and lead you to the advertised potential 109x gains. Of course, by following his lead and investing in one company he teases, he claims you can get impressive returns and secure a decent retirement fund to last you for years.

All about the Opportunity

Firstly, micro-cap investing is not for the faint of heart. Secondly, many micro-caps (depending on the exchange on which they are listed) are not required to regularly file financial statements leading to plenty of ambiguity if you’re not intimately familiar with the business in question. However, many things have changed since the wild west days of the 1980’s when tech companies like Intel, Microsoft, and Apple first started getting into the business and going public, the over the counter market today is much more regulated at its highest tiers.

So, is it a good opportunity to invest in this teased company that will potentially give you 109x gains? With hundreds of new patent applications in the industry every day, most likely we will witness a new tech revolution in the next 5-10 years, especially in the fields of 5G technologies, robotics, Artificial Intelligence, and alternative money or cryptocurrencies.

The “four largest chip makers” TSMC, Samsung, NVIDIA, and Intel have a combined market share of almost 90% of all microchips sold worldwide, which means there is little room for other competitors to take a big slice of the pie unless they come up with something that will completely revolutionize the world, similar to what Apple and Netflix did in their respective fields.

This begs the question – is the microchip industry still worth investing in? The good news is that companies are already looking into alternative methods to build more powerful chips as Moore’s Law has reached its limits and is no longer viable in the 2020’s. Therefore, investing in micro-cap and microchip companies could still yield impressive “instant profits of 200%+”, sometimes reaching up to 2,000% in a matter of days or weeks according to Chris Wood.

However, knowing the exact company on which to place your bets is always a gamble, even if some of Wood’s predictions came true throughout the years. He did tell people to invest their money in NVIDIA stock when the company’s shares were sold for $12.41 each, which would have led some people to substantial gains since now the company is selling for over $400 per share.

The same happened to a relatively unknown company named Kopin which, after declining 80% in a bad year and having sold its shares for $.50 each, saw its stock soar 921% “in just 4 months” after releasing its “Augmented Reality micro-display patent”.

Throughout his newsletter, Chris Wood gives multiple clues to what the company is, which means you don’t have to pay for the expensive yearly subscription to get most of his insights on this firm. A closer look at some of these will reveal the company Wood is talking about.

Taking into account all the details Wood is referring to, we could easily identify the company being teased in his latest marketing newsletter as ATOMERA Inc. (NASDAQ: ATOM).

Is Atomera about to Skyrocket?

The company has generated increased interest from the microchip industry trying out its MST technology. However, it remains risky as there are many other variables involved before you receive your promised 109X gains. The company may or may not strike the deal Wood teases and hints at, which means that you could get a once-in-a-lifetime opportunity or once-in-a-lifetime disappointment.

Atomera may ramp up to potentially $100 million in revenue in the next couple of years, which means you will be close to receiving substantial returns on your first investment. However, there are dozens of other patents being received for microchips daily, and who can say which one of them will really hit the market and become the next best thing?

As with many other similar investments in the microchip industry, Atomera could become a great investment in a few years time. And, at around $8 per share if said shares ever reach $25 by the time you want to sell, you would see a tidy profit.

If you’re willing to wait a few years and invest a considerable amount of money in Atomera shares, you might end up with decent returns but not enough to set you up for life as is being advertised.

Do you plan on investing in Atomera? Do you think that Moore’s Law isn’t relevant anymore? Is MST the next best thing in microchip technology? Let us know in the comment section below.